Hi everyone. Just some questions concerning my 60 Gallon Tank. Hoping someone can help.
I have 3 Bolivian Ram's and one of them looks to be stressed as it's colors aren't normal. It's basically turned dark grey and hides from time to time. But every now and then comes out to swim around. Hasn't been eating much either.

Also been trying to find a way to get my water softer. Which I believe is the cause of my Ram's being a little stressed. I've tried Driftwood and Tetra Black Water Extract but doesn't seem to be doing much. Suggestions?

And wondering if I can get some help with what the sex is of the Bolivian's. These are obviously a little harder to sex then the German Blue Rams.


I have a 60 Gallon with CaribSea Super Natural Sand (Sunset Gold), Moderately Planted and Lighted.
With a Marineland Bio-Wheel Penguin 350 Powerfilter.

I've had a good look at your photo's and I'm fairly certain you have 1 male and 2 females - the male being the one in the first photo. I am basing this on head shape alone as none of these fish have developed extended fins yet - I'm guessing they are too young.

Males will normally develop an extended 3rd ray on their dorsal fin and extended tail fins too. To be certain of sex you will need to wait until they mature further.

I'll add an old photo of my male bolivian. 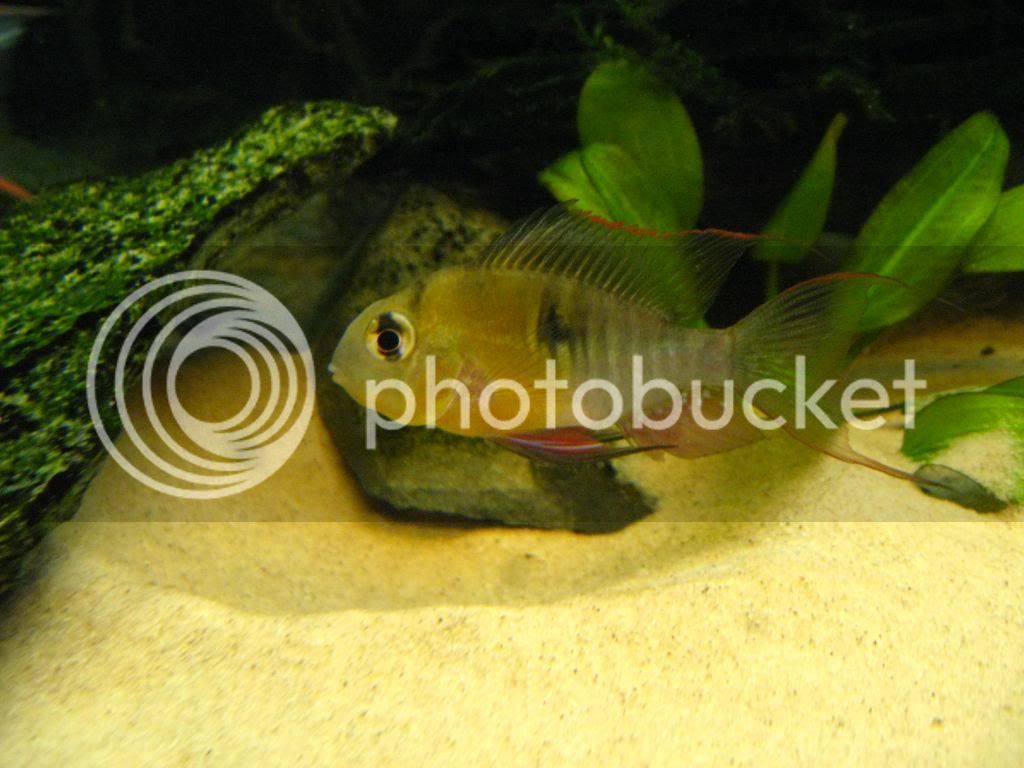 You can clearly see his fin extentions

In terms of your water ... with a pH between 6.8 and 7.2 I see no problem with this. It's roughly around the same that mine was when my pair of bolivians were breeding regularly.

In terms of stress ... well with 4 different types of cichlid in your tank there is bound to be territorial issues and this will be causing stress. Too many cichlids in one tank I'm afraid. I tried having 3 types myself - I had a breeding pair of laetacara curviceps, my bolivian ram breeding pair AND a pair of angels. The rams took the right side for territory, curviceps secured the left and the poor angels were sat in no mans land. I had to re-home them in the end. The war was just too much.

I believe this is the reason for the stress. You don't show a photo of your tank so I've no idea of how well planted you may be but this may be the only way to make this work as it will break up the lines of sight and give the fish plenty of places to hide

I have a Bolivian Ram that also went through that stage...being very dark and hiding a lot.   I had one other Bolivian ram in the tank along with a few other types of fish.  This was in a tall hex 35 gallon tank.   I probably didnt have enough substrate room in the tank and not enough hiding places via plants or wood so they could each set up a territory.   The other ram would chase the stressed one a bit so that probably was a factor.

I moved them into a 29 gallon rectangular tank that had more plants and driftwood than the other tank and a larger substate area.    The stressed Ram seemed much happier in this tank as he had his own little territory on one side of the tank and the other often hung out on the other side.   Here's a recent pic of him now...he's about 3 years old.

Try to arrange your tank so he has a good sized area of the tank to hide in and label as his territory.   With time,  my bet is he will do better.
OP

Thanks for the replies.  I am planning on adding more caves, driftwood and plants in the future, but as of now it is still fairly bare in my opinion..  I upgraded from a 23 to a 60 a few months ago.  As far as my stock and the cichlids, I know I may have one too many rams, and the juli cichlids I had bought out of curiosity because I've never seen them before.  They are still babies. Of course before I purchased them I asked about them and the person at the pet store said they were a hybrid dwarf cichlid and they were about as peaceful as rams.  Come to find out later that it was not true, as I've noticed a lot of aggression.  My other concern is I've recently noticed my EBA has been more aggressive in the past few days.  Though I haven't noticed him bothering the rams much, but maybe he is when I'm not looking.  I've had them all for a while now.  I've read they they should be compatible though.  Anyways, I am probably going to rehome the Juli's. I forgot to mention too, I have two midsize Angel's.
Another question I have... I posted a this on a different forum (fishlore) and rather then answering any of my questions people have decided to ream me a new a-hole because I have neon tetra's and peppered catfish in this aquarium, due to them preferring cold temps and not having enough in the school.  This is surprising to me.  I'm planning on getting more for the school eventually, but as far as the temps go... i've never heard of that.  I keep my temp around 78 which from what i've read is normal for them.  So any input would be helpful.  Thank you.
Here is a pic of my aquarium.

It's life Jim, but not as we know it.

If you're talking about peppered corys then yes, they tend to prefer it a little colder than 78, it's about the top of what they can manage so you might be better dropped a couple of degrees, which the rest of the fish shouldn't mind too much.

Upping the numbers of the shoalers may also help to alleviate your primary issue, as it'll give the more dominant ram something to contend with beyond the fish that's having problems.

As for softening the water, the only real way is to use softer water (rain water is often the easiest option, so long as you're not exposed to crop spray or too much pollution). Hardness is a measure of extra minerals in the water, so adding things to counteract them isn't going to actually get them out of the system. I'm guessing that your tap water is also hard, and is the source of the problem, if not then you may have something in the tank that's slowly dissolving and driving up the numbers. Rocks can be culprits, as can substrate (although the one you mentioned is supposed to be ok).

wow 5 different types of cichlids in one tank ... you're a brave man! lol

I hope you don't feel anyone here is labelling you as anything and I really hope my response hasn't offended - it was not my intention. Whilst I always try to be honest I also try to remain friendly, polite and helpful.

Now that I've seen your tank photo I would advise that you add more plants and decor as soon as you can. It's very open and there is nowhere for these cichlids to hide and stress is the main thing I'd expect to see.

Kribensis is well known for it's aggression and rams are known for their more laid back nature. I've not kept blue acara's but I believe these can be quite aggressive too. I have a pair of angels myself now and I know how aggressive they can get aswell! Should you end up with pairings and breeding starting I can see tank turning into a war zone.

In terms of your temperature - I'd agree with Rob ... drop it down to around 25. This would make it a happy medium for all.

The lone cory needs some friends. Cories are shoalers and a group of 5 or 6 of the same type is the recommended. The same with the tetra's ... they really need to be in groups of around 10 but this may well leave you over stocked

Thank you.  Sorry, I wasn't implying you were being rude.  I appreciate your advise and will definitely take it!
The Krib has actually been very friendly and so have the angels so far.  It's mainly the EBA (which my blue gourami keeps in check lol) and the Juli Cichlids that have been the concern.  I love my Bolivian's and would hate for them to pass. I will be adding more plants to my tank soon and will definitely add more cories.

Try to introduce more hiding spaces or divide the aquarium up so each Cichlid has its own territory to make claim for and this situation should resolve itself.

to give you some ideas, this is what I did to set up territories in my 29 gallon tank.....there is a large pc of driftwood separating front to back areas....there is a cave made from flagstone on the left which a nanus cory hangs out in...there is a sponge filter in left rear corner that one Bolivian ram hangs out behind....a fair number of anubias and java fern on the driftwood and on rocks...a two story flagsone/ rock cave in rear right corner that the large 5 inch BN pleco hangs out in..

one of the Bolivian rams died a short time ago--not sure of cause but remaining Ram seems content..they never had territorial issues in this tank and got along fine.. the rest of the stocking is in my sig...the neons and rummynose have thinned out over the years and will not be replaced

I'd have more plants, but it's a low light tank and only a couple of varieties will grow with any success 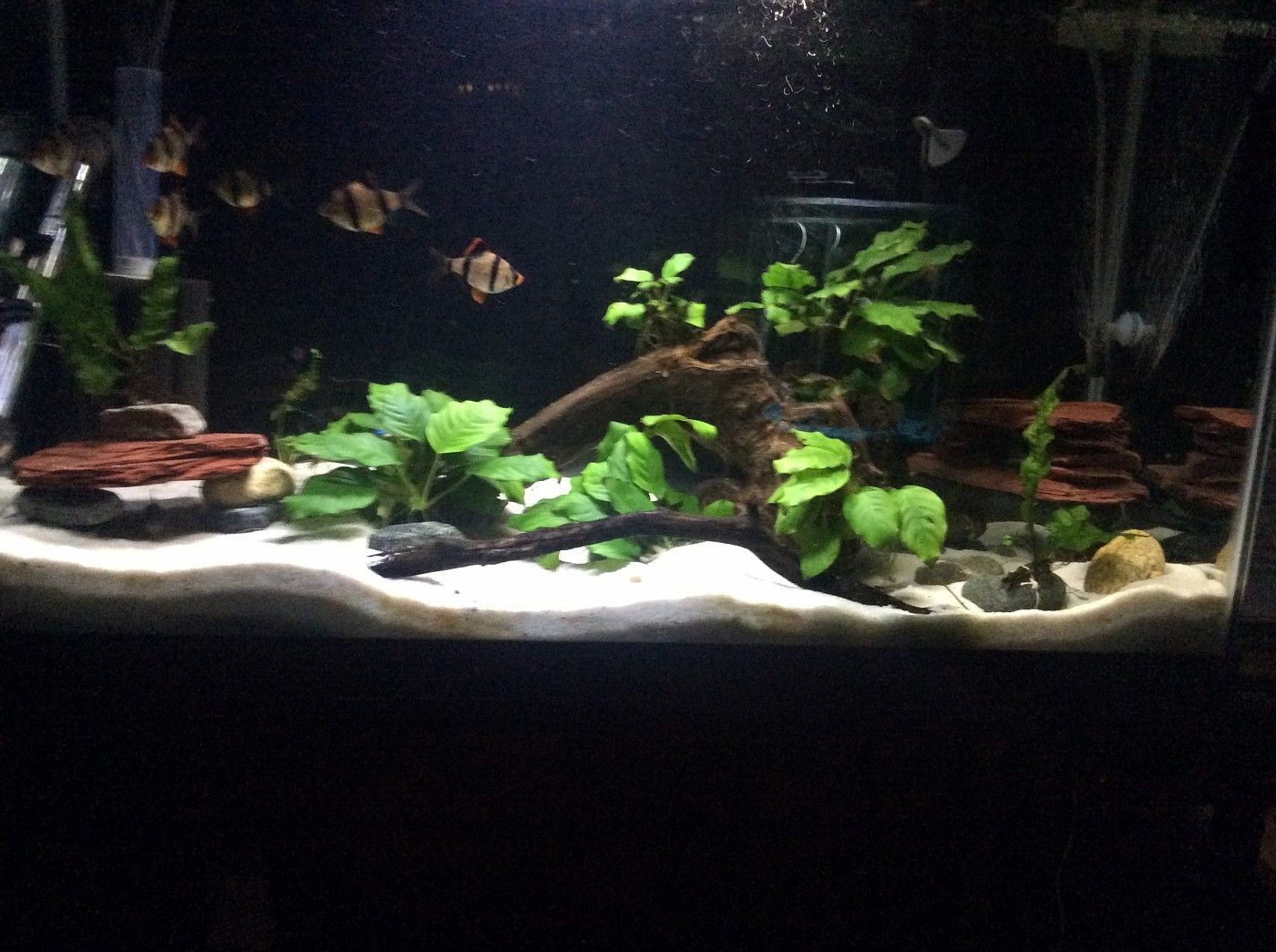 Bubbler and hardscape acquired B)