This is going to be my 20g long journal. I’m going to update at least every week with pictures and other information, about the live stock and plants.

This was 11 days ago: (nothing added, nothing trimmed) 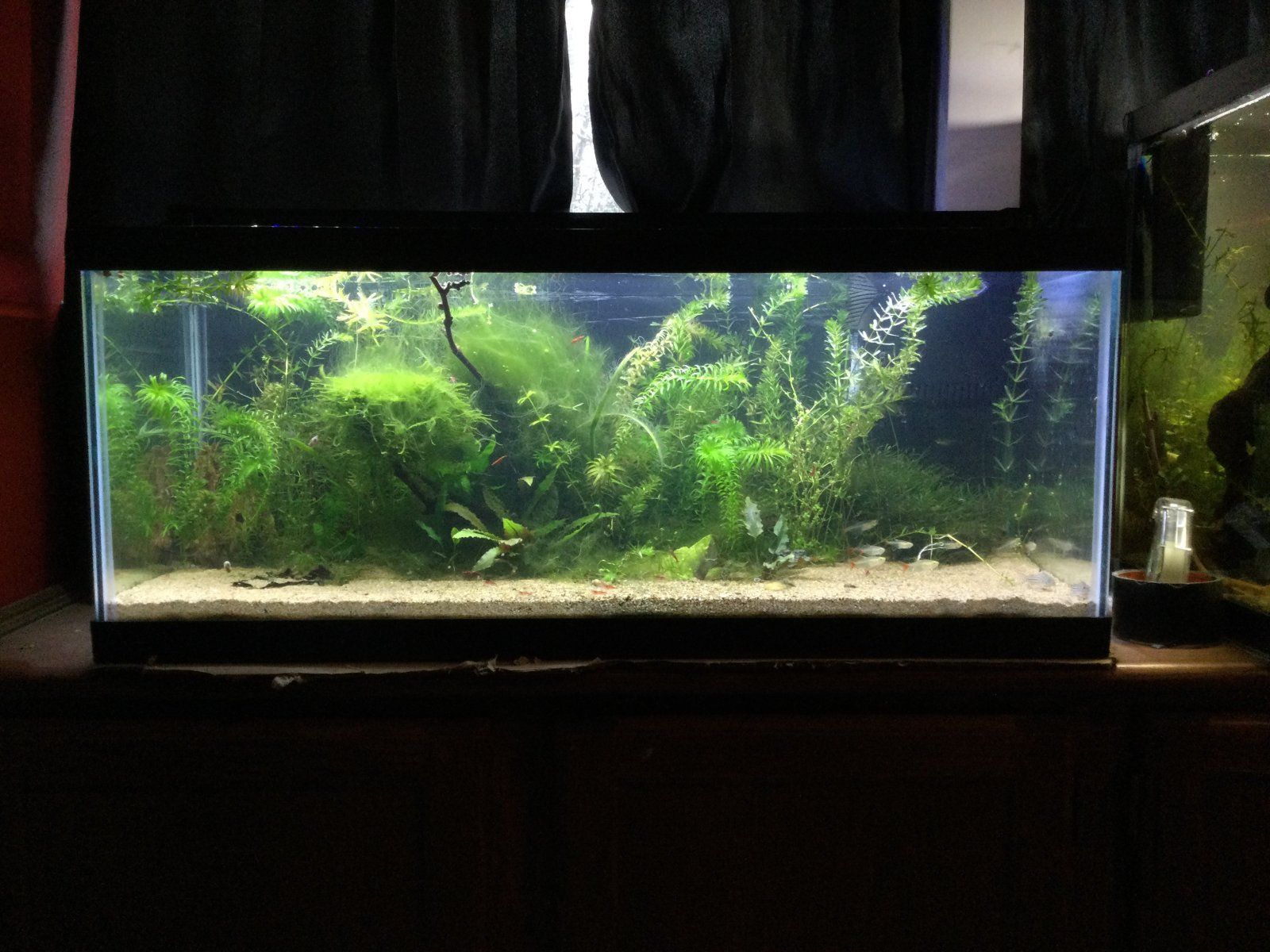 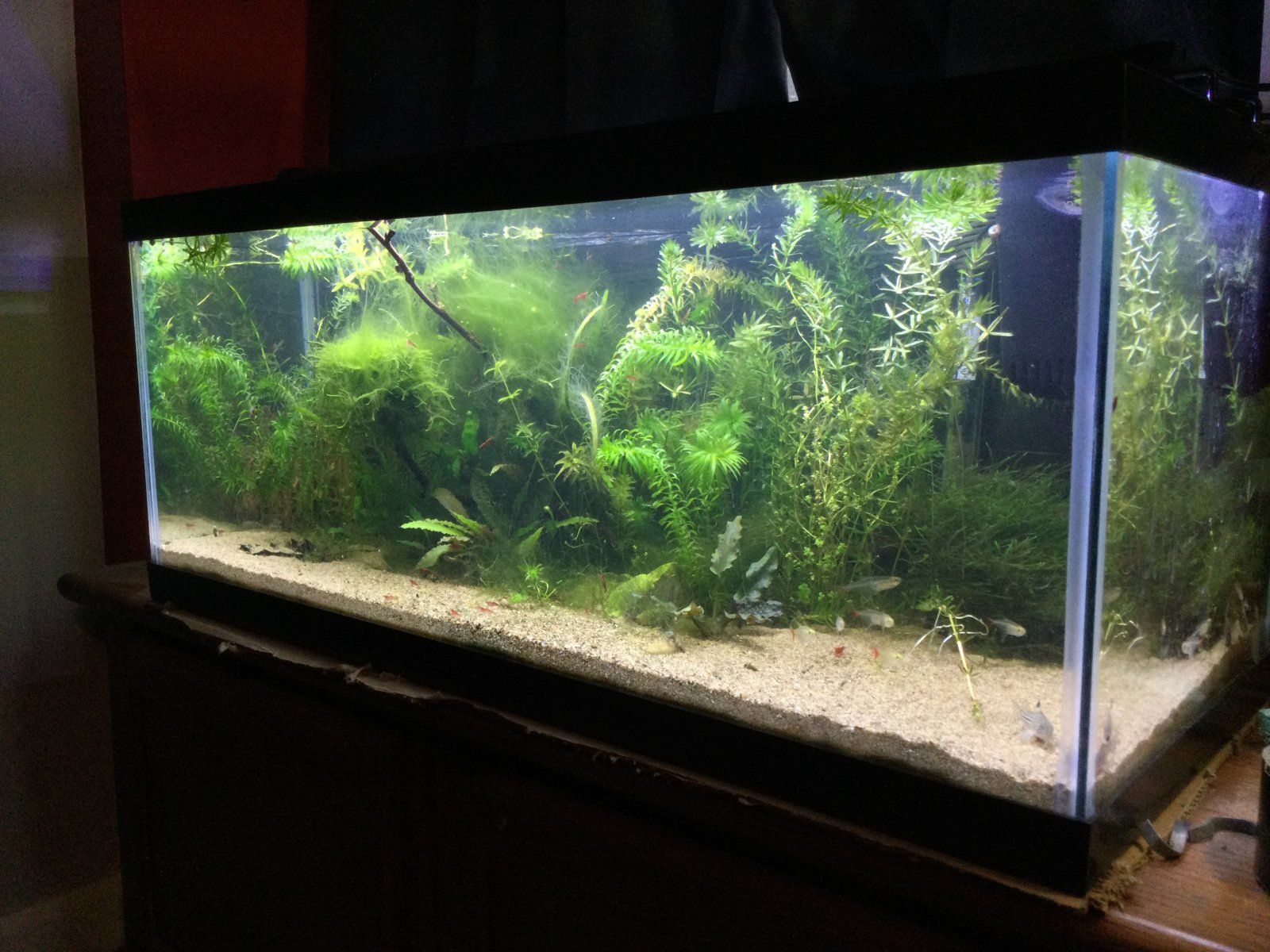 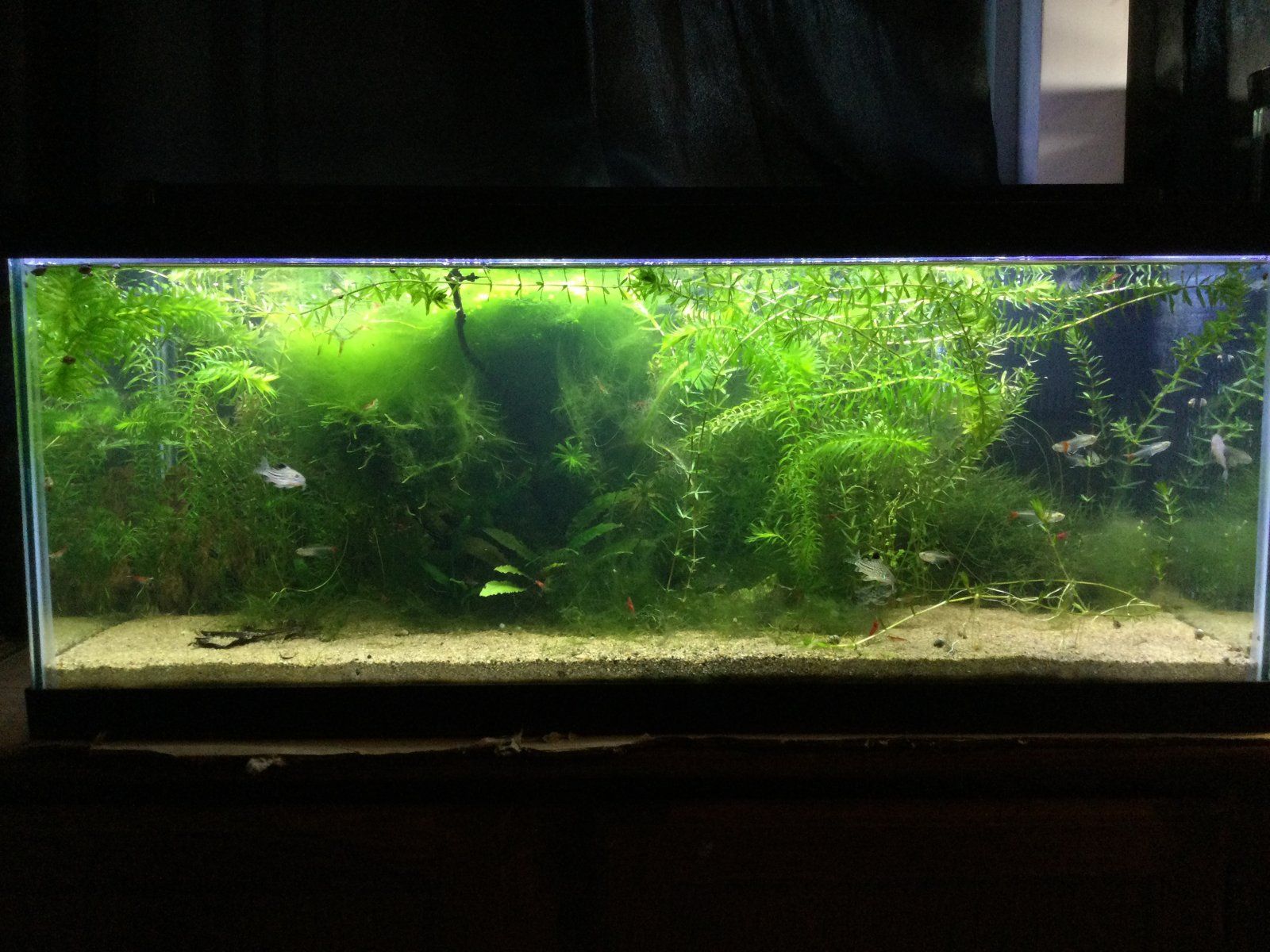 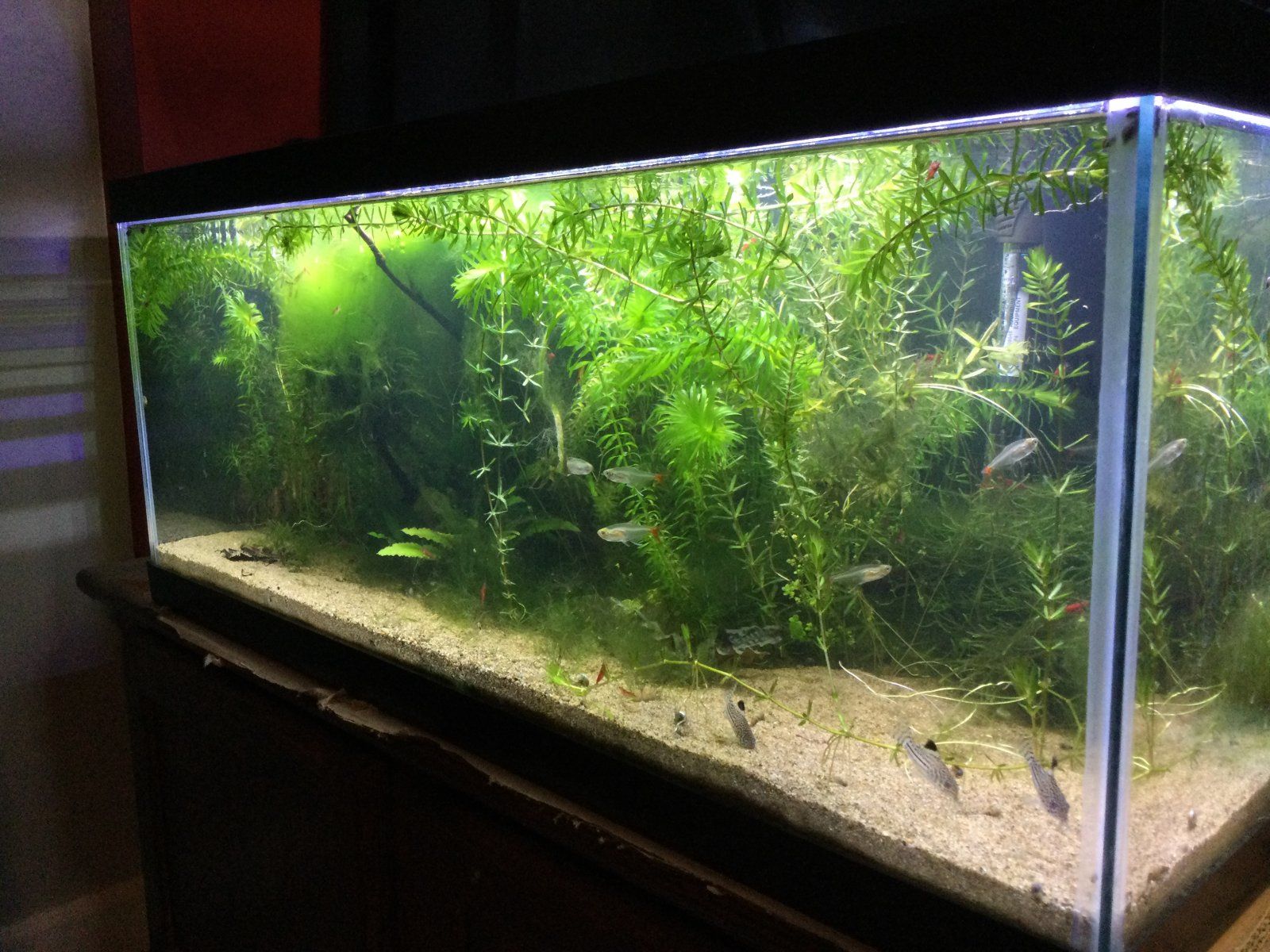 Update on plants: (first is going to be a full list of the plants in this tank)

(More to come if I forgot any


The Anacharis is growing at an exceptional rate (as usual). I thought the moneywort was going to die there at first, but I see a lot more new shoots, and they all look healthy. The crypt on the right (you can see it best in photo #1) has died. It never really got settled I think. The crypt on the right however, is doing exceptional and has apparently found the root tabs*.

That algae on the Java Moss is driving me crazy though. Should I trim it off? I don’t want to limit the lighting, because the plants are used to it and are obviously flourishing. Thoughts?

That was pretty much all for plants, now on to livestock

Stock:
The BF Tetras have settled in much more than when I first got them. A couple of weeks ago, they would all be hutlled in a corner, all shaking their tales. Now they are playing in the dense vegetation and have started exploring the tank.

The Corys were cool as a cucumber when I first put them in, as they usually are. No complaints from me on them - they’re awesome!

I feed the BF Tetras Omega One Tropical Flakes, along with Fluval Bug Bites. I feee the Corys/shrimp Omega One Shrimp Pellets. (The shrimp eat the shrimp pellets; isn’t cannibalism?

The tank has been doing great as a whole. I never thought it would look this good. Over a month ago, it looked like this: 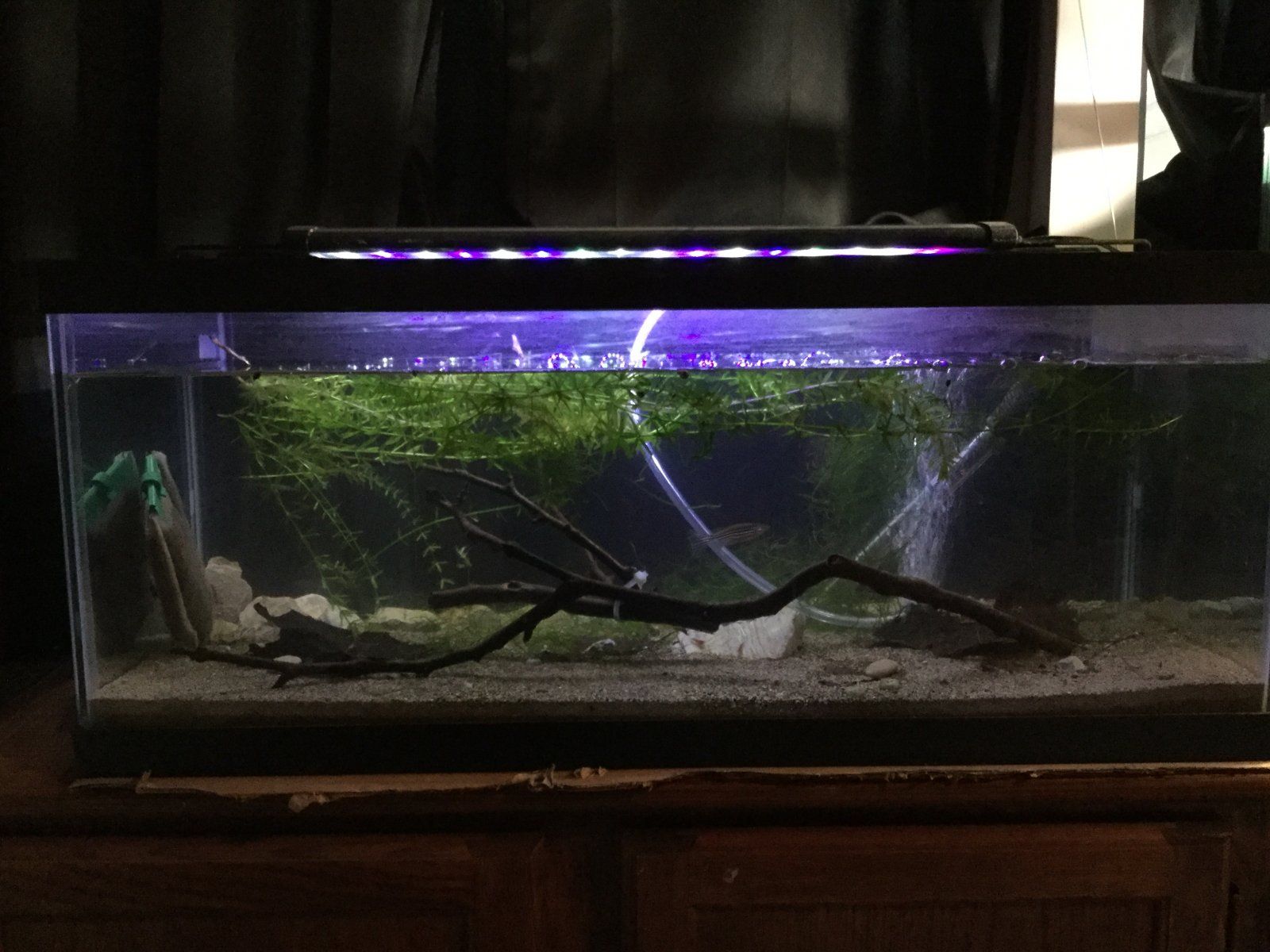 Anyway, stay tuned for updates. I may be updating daily, or triweekly.

* I use these root tabs.
OP
OP

I have lots of work to do today. All of that algae needs to come out, as it’s choking out my frog bit. (The frog bit is doing wonderful by the way)

I also need to trim all of that Anacharis. Some of the trimmings will go back in the 20g long, but some of it will go in the 10g and the 29g.

The BFT are doing good, although they are still super shy. The Corys are doing awesome, such social little creatures.

Here is the tank 9 days later: 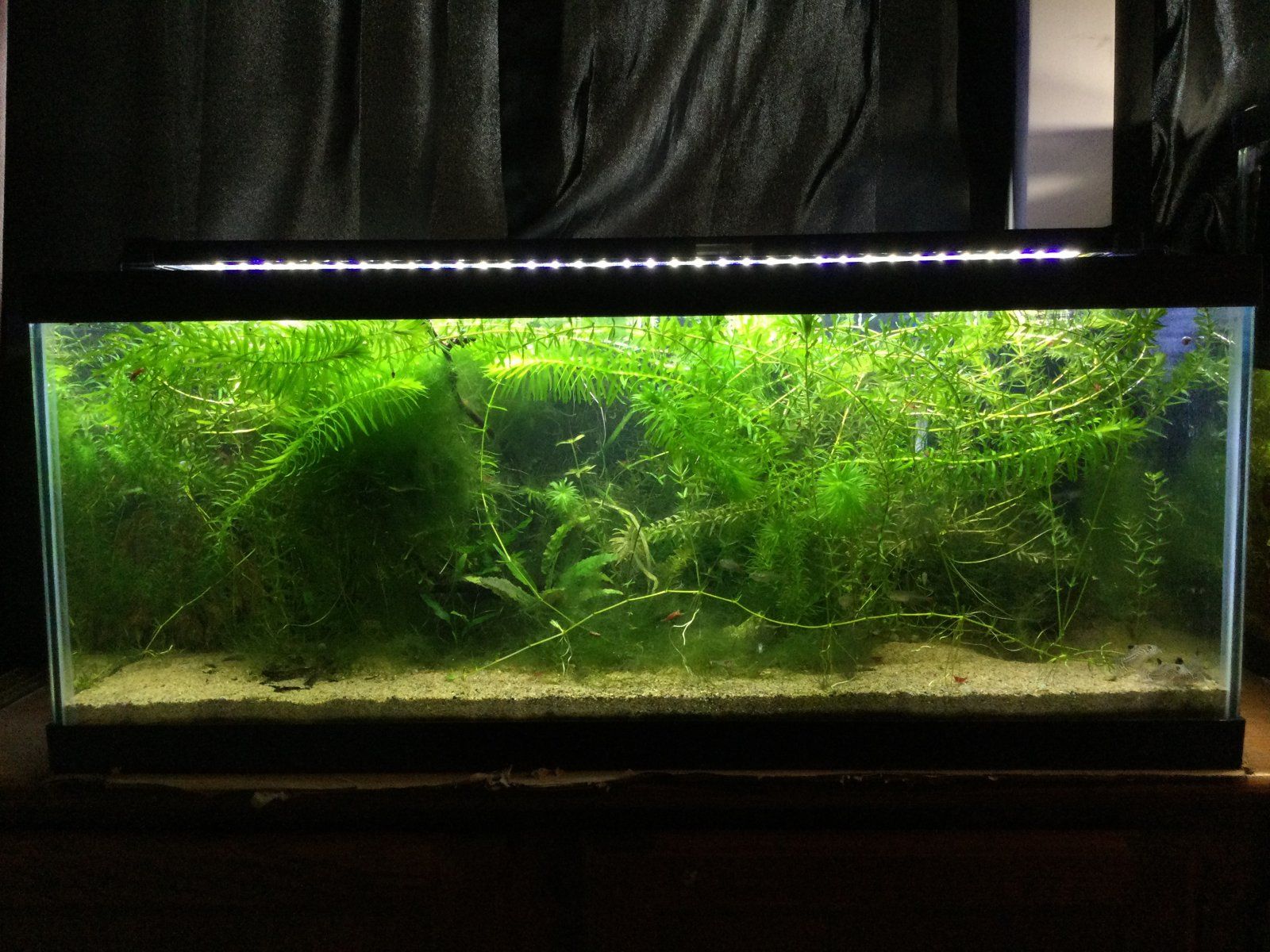 Note: I did remove a huge chunk of that algae last night because I was tired of it. It was also pulling my frogbit down, and choking it out.

Nonetheless, the frogbit is doing good: 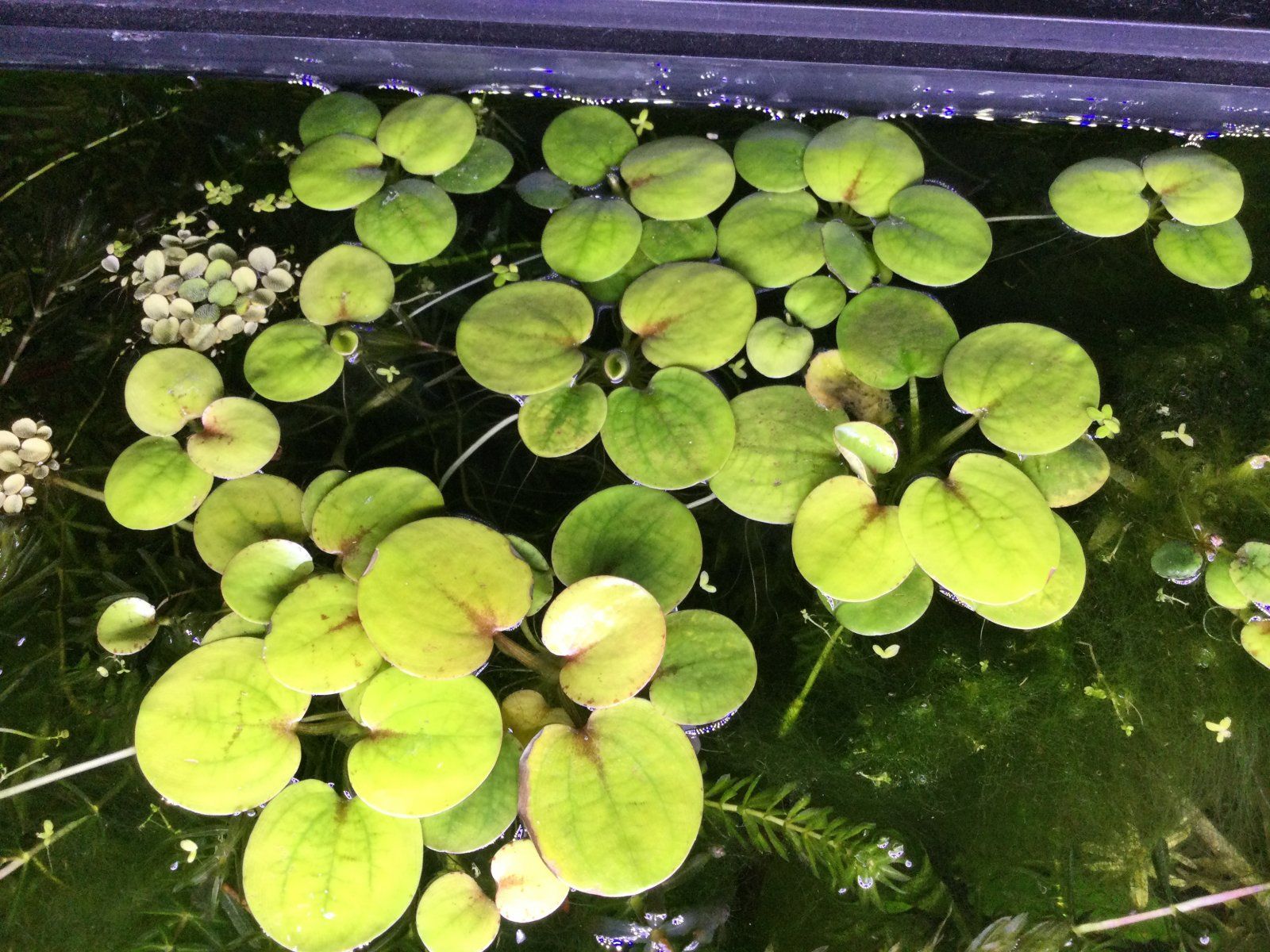 Im going to trim and re plant today. It’s going to take an hour so so, but it will be worth it.
OP
OP

Ok, just finished removing all of the Anacharis and a little more algae: 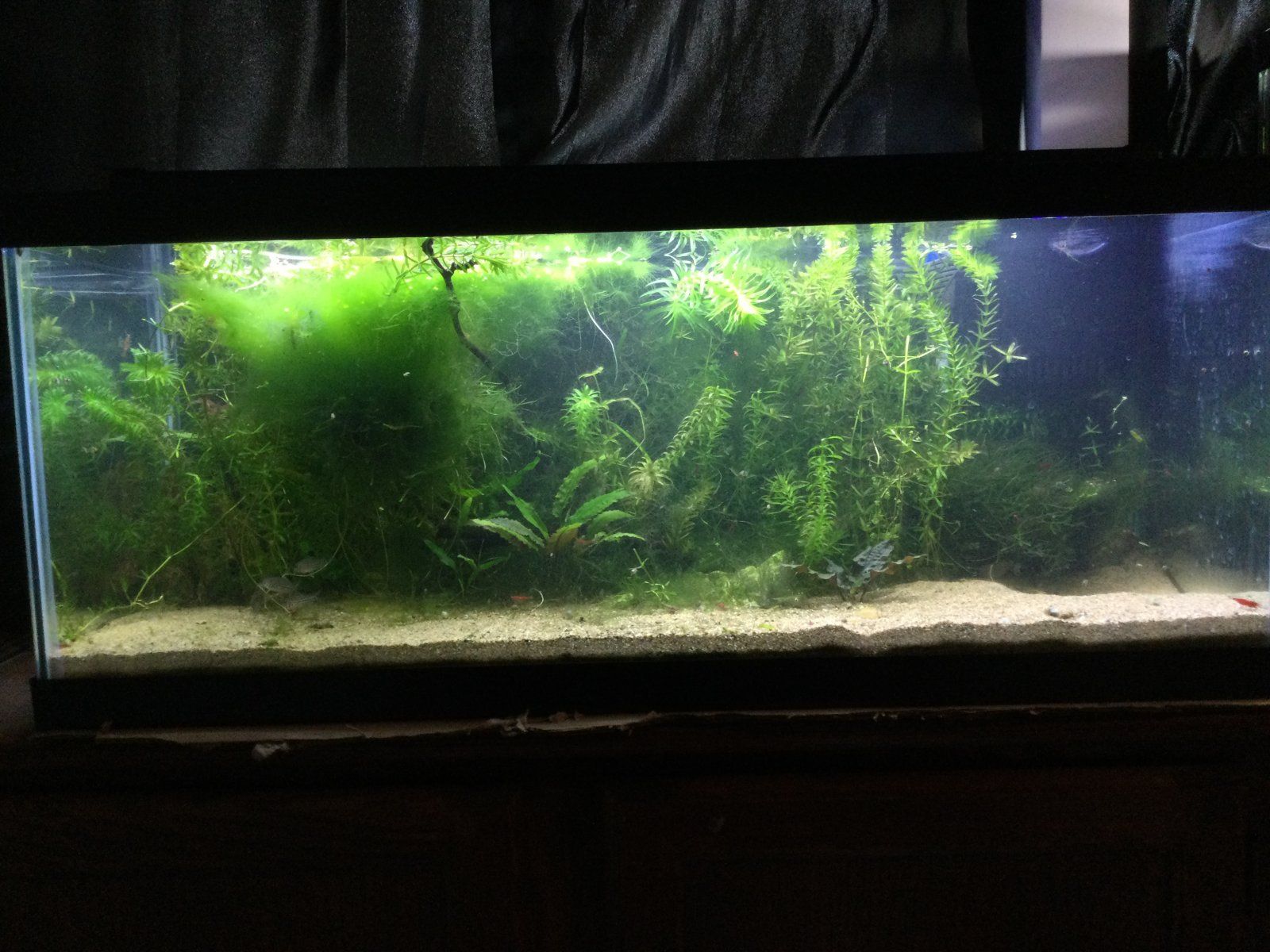 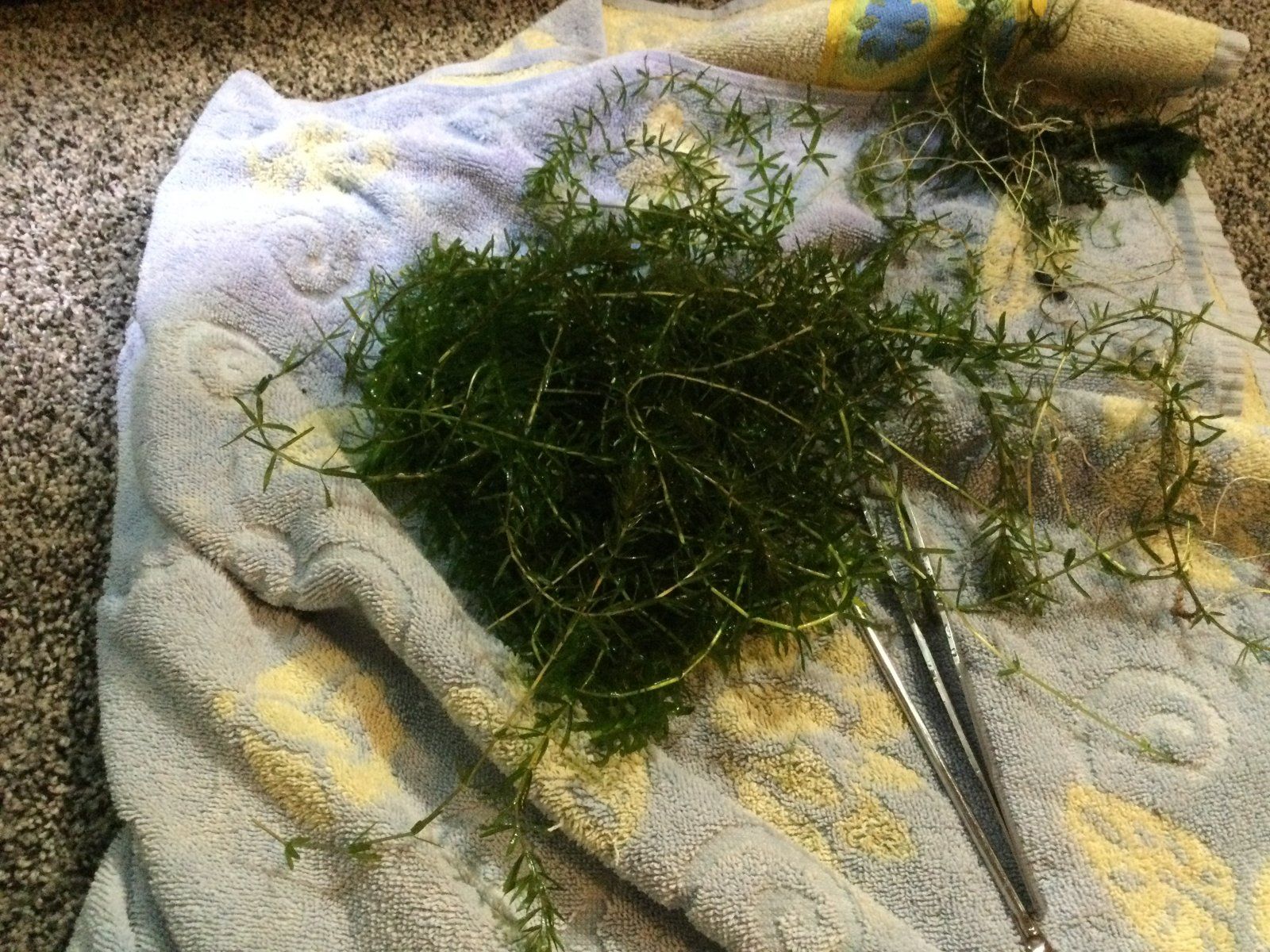 Crazy amount of algae in my 29g tank as well: 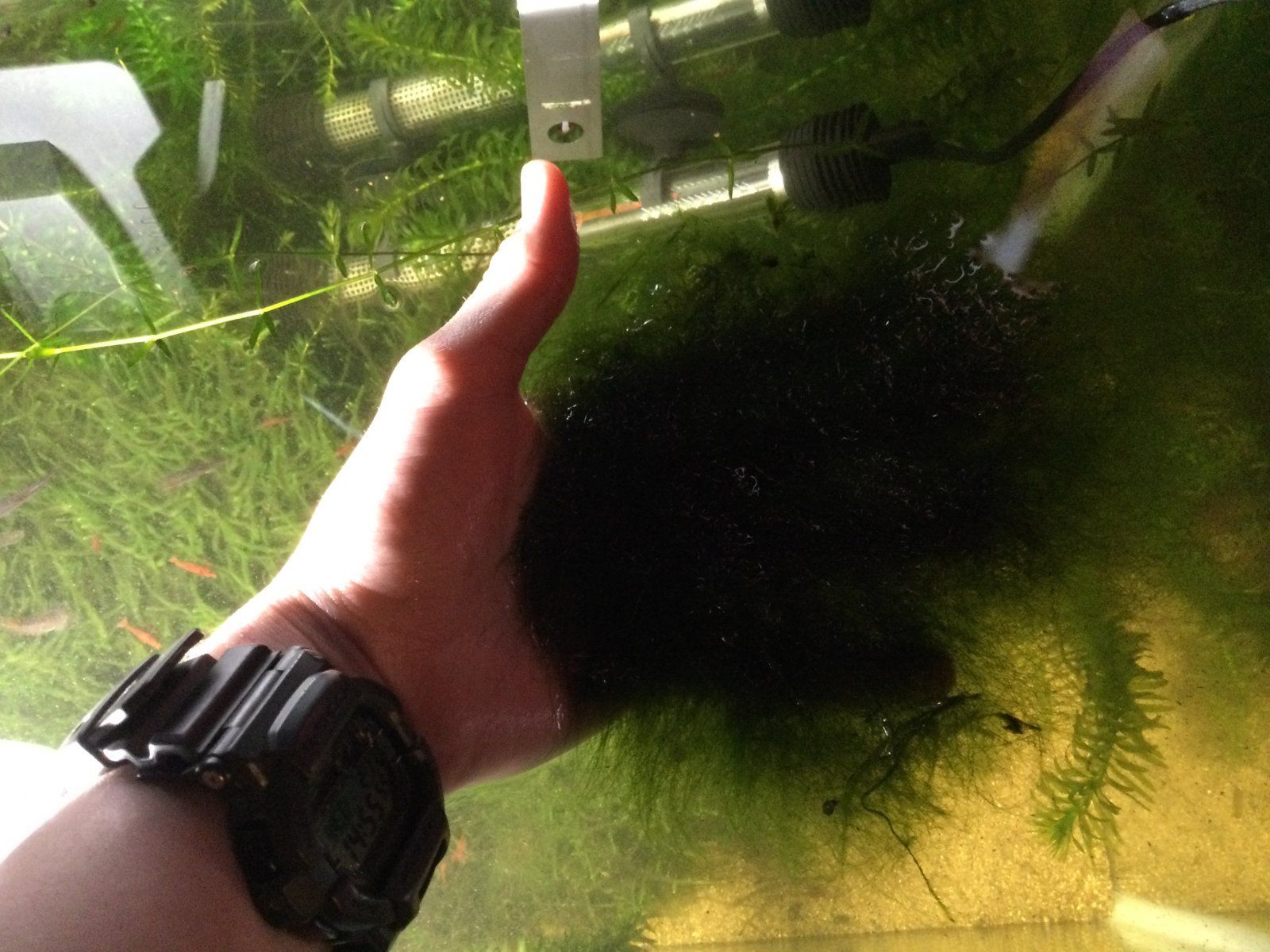 What are your guys thoughts? Remove all of the algae I can? (If you can see in the picture, there is a layer of healthyish Java Moss underneath all that hair algae.)
OP
OP

Finished for now... I may do a substrate vacuum later: 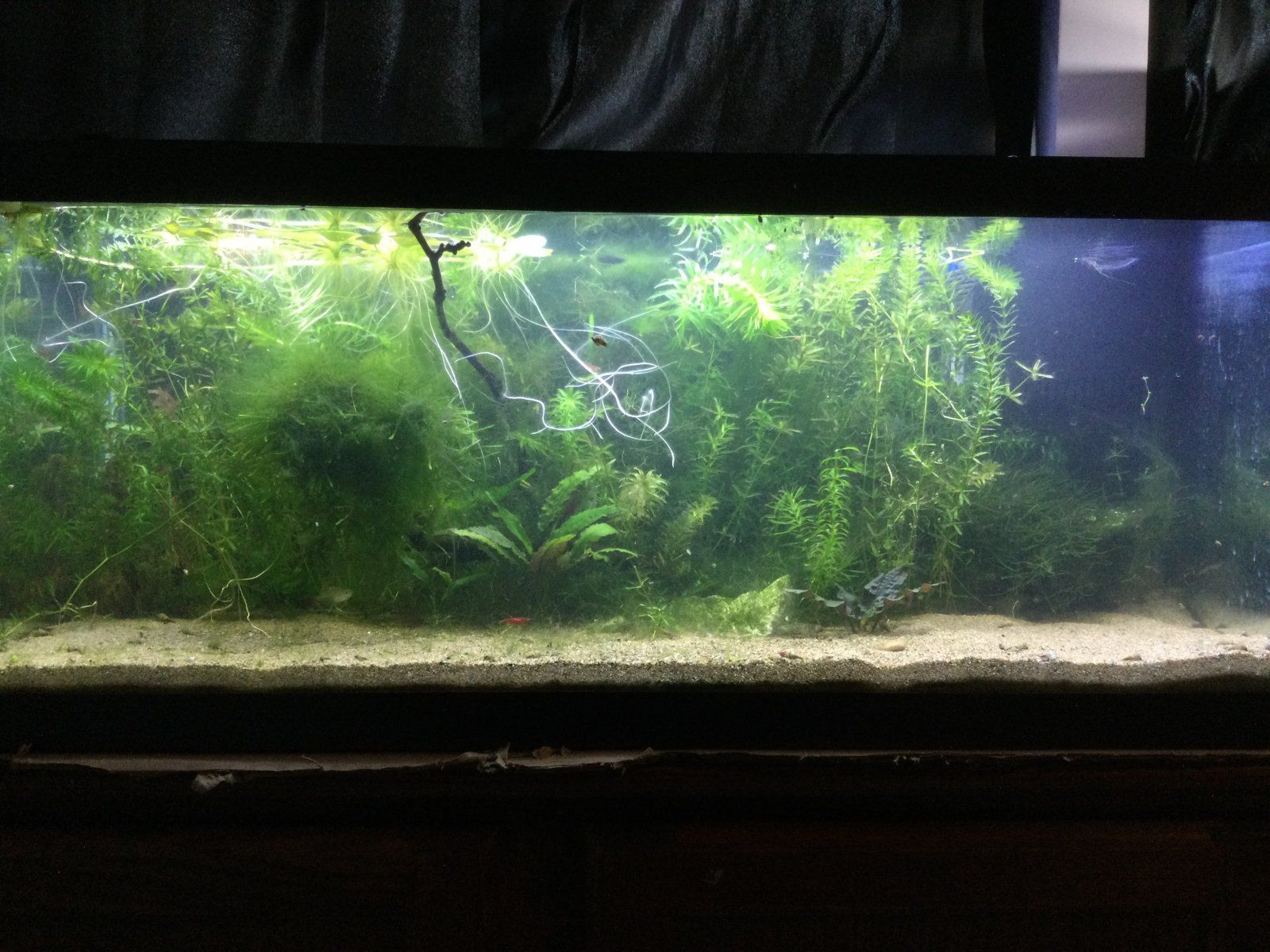 I can actually see my beautiful frogbit roots! 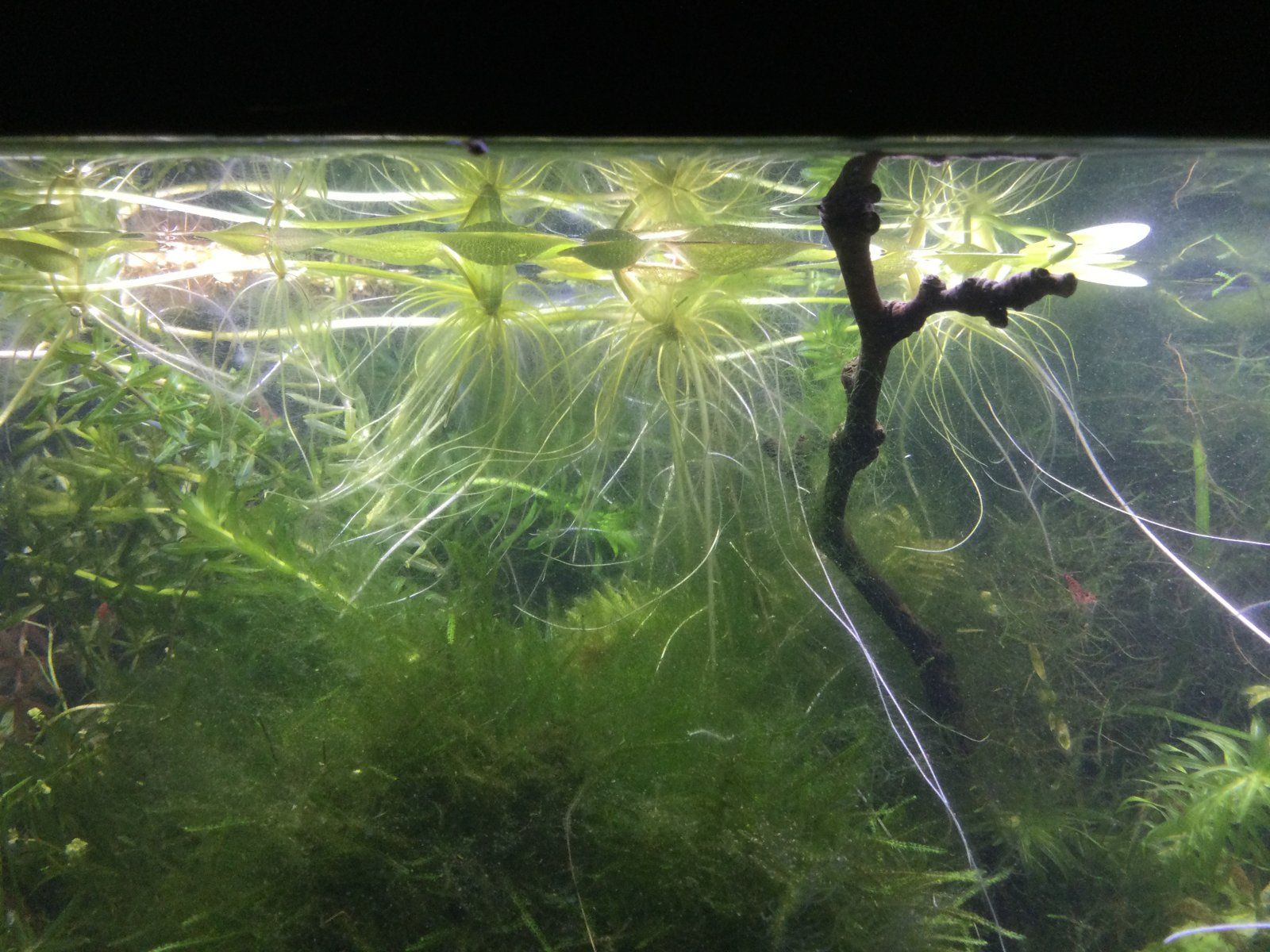 I put the trimmings in my 29g tank for now, there were quite a lot: 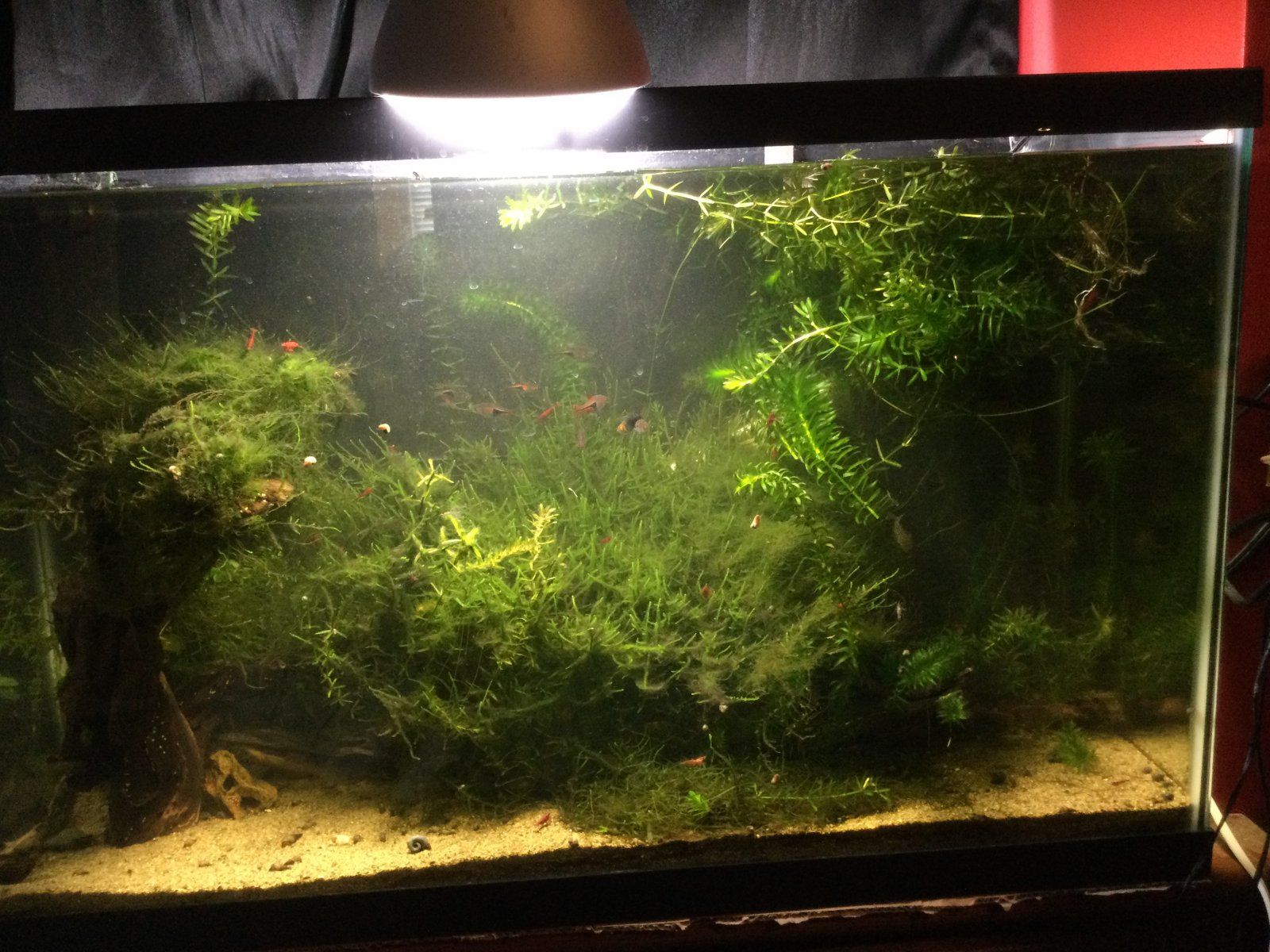 I think you need a lot more hardscape especially on the left and right. The middle is looking really good with that crypt and the healthy plants around it. I would remove as much of the algae as possible, even if it means loosing some of the moss.

You could make a really good island scape with what you have if you had branches arching/sticking out to the left and right and then some big rocks enclosing the planted area, even with some ephiphite plants growing through them like Trident Fern.

Wills said:
I think you need a lot more hardscape especially on the left and right. The middle is looking really good with that crypt and the healthy plants around it. I would remove as much of the algae as possible, even if it means loosing some of the moss.

You could make a really good island scape with what you have if you had branches arching/sticking out to the left and right and then some big rocks enclosing the planted area, even with some ephiphite plants growing through them like Trident Fern.

I definitely need more hardscape. I would like to get a few more thinner driftwood pieces like the ones I have in there now. I think that large river stones would accent the tank better than dragon stone, don’t you?*

Do are you suggesting I fill up the corner more?

Just to give you guy an idea on how much algae was in the tank, look at this: 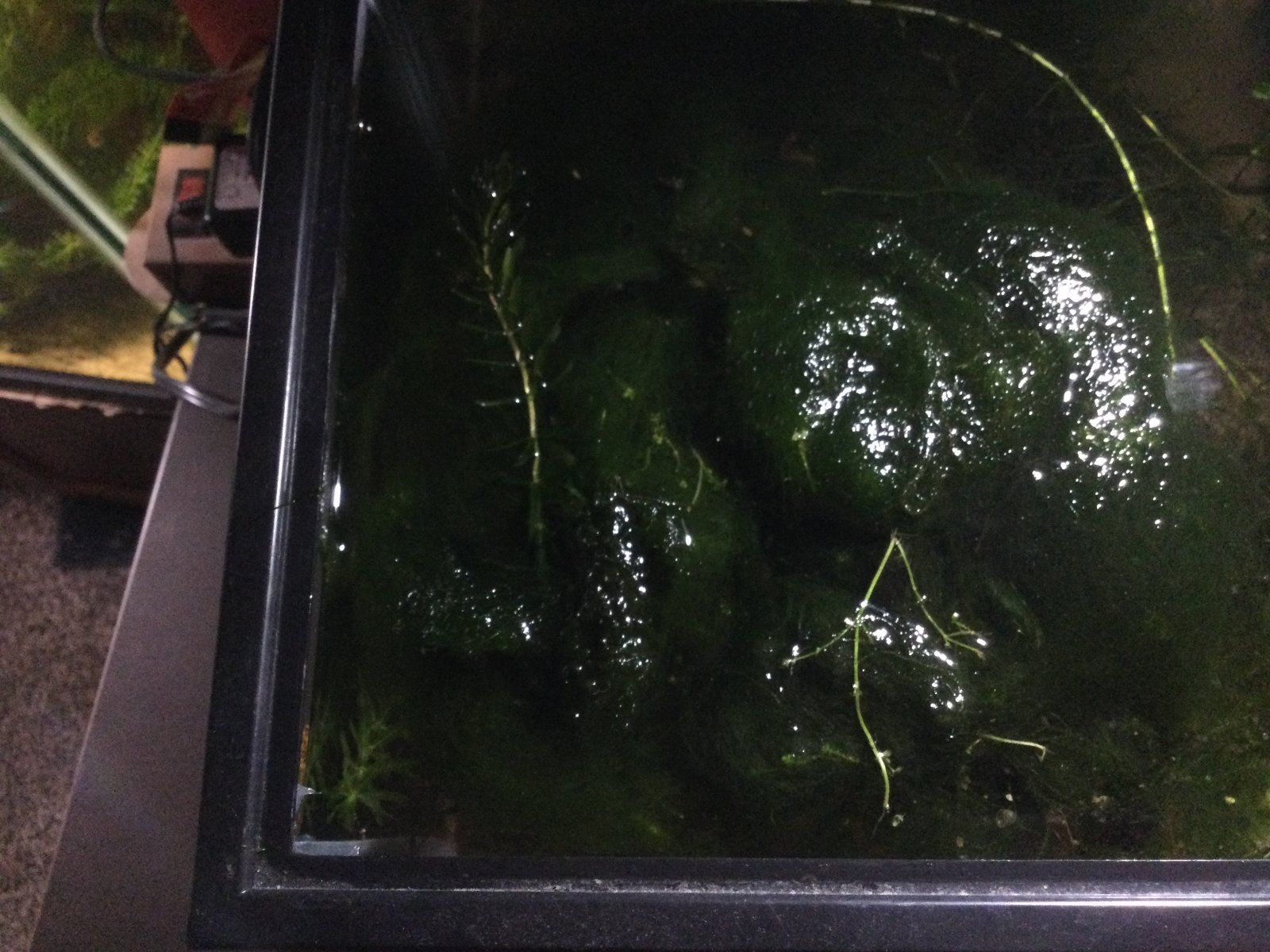 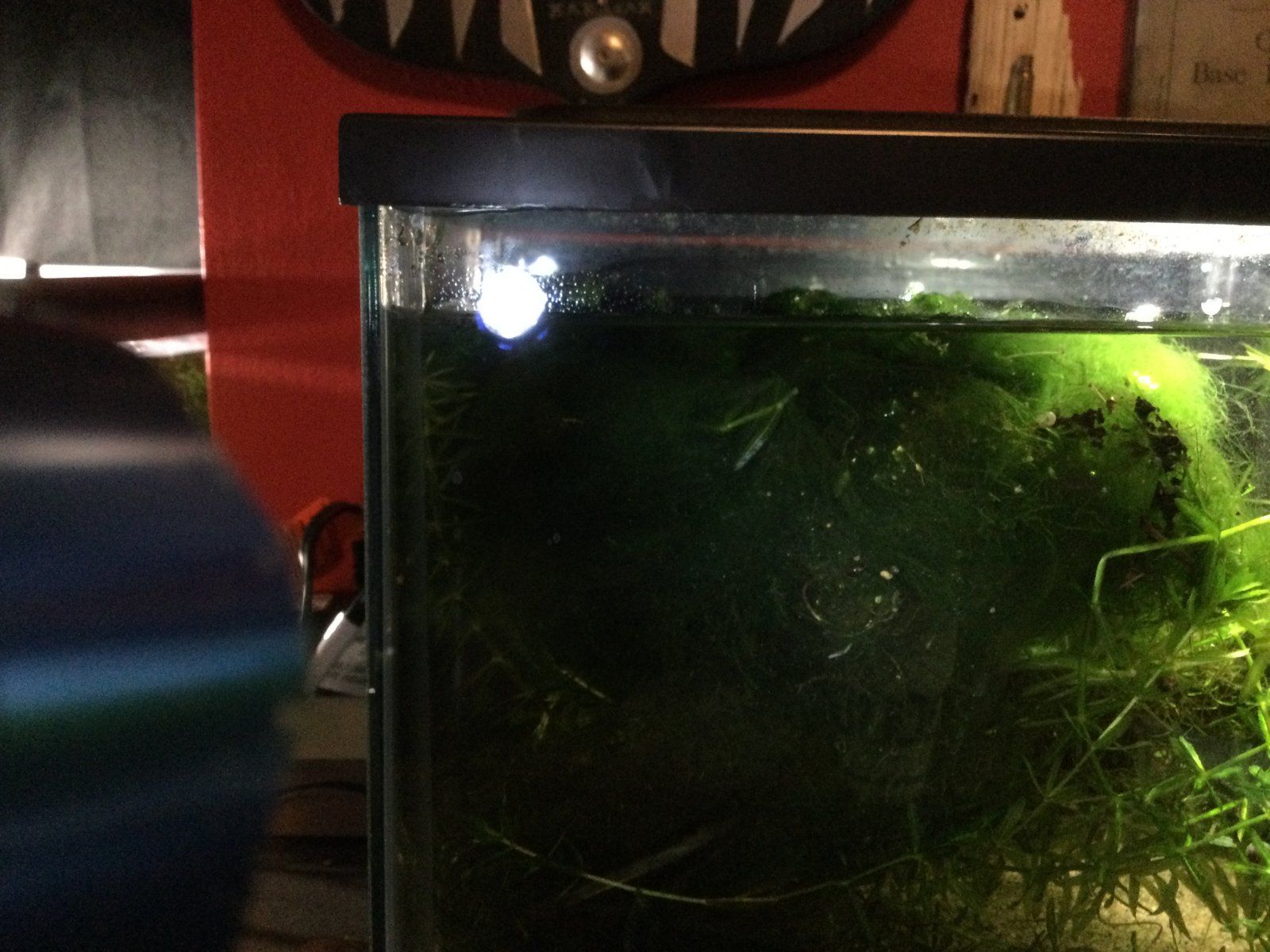 It’s an absolutely huge mass of algae. At least 8 inches across and 4 inches deep. Maybe I let it grow for to long...

Not going to get any more work done on it today sadly, but I have tomorrow to work on it.

The BFT seem much happier that they have more room to swim.

I didn’t realize until now, that frogbit roots will go into the substrate! This one super thick root is buried in deep.

* I do have one medium size dragon stone piece in the back left corner, but you can’t really see it. There is a nice selection of dragon stone at my LFS, so if you guys think it would accent the tank nicely, I could get some once the pay check comes in.

Here is the tank today: 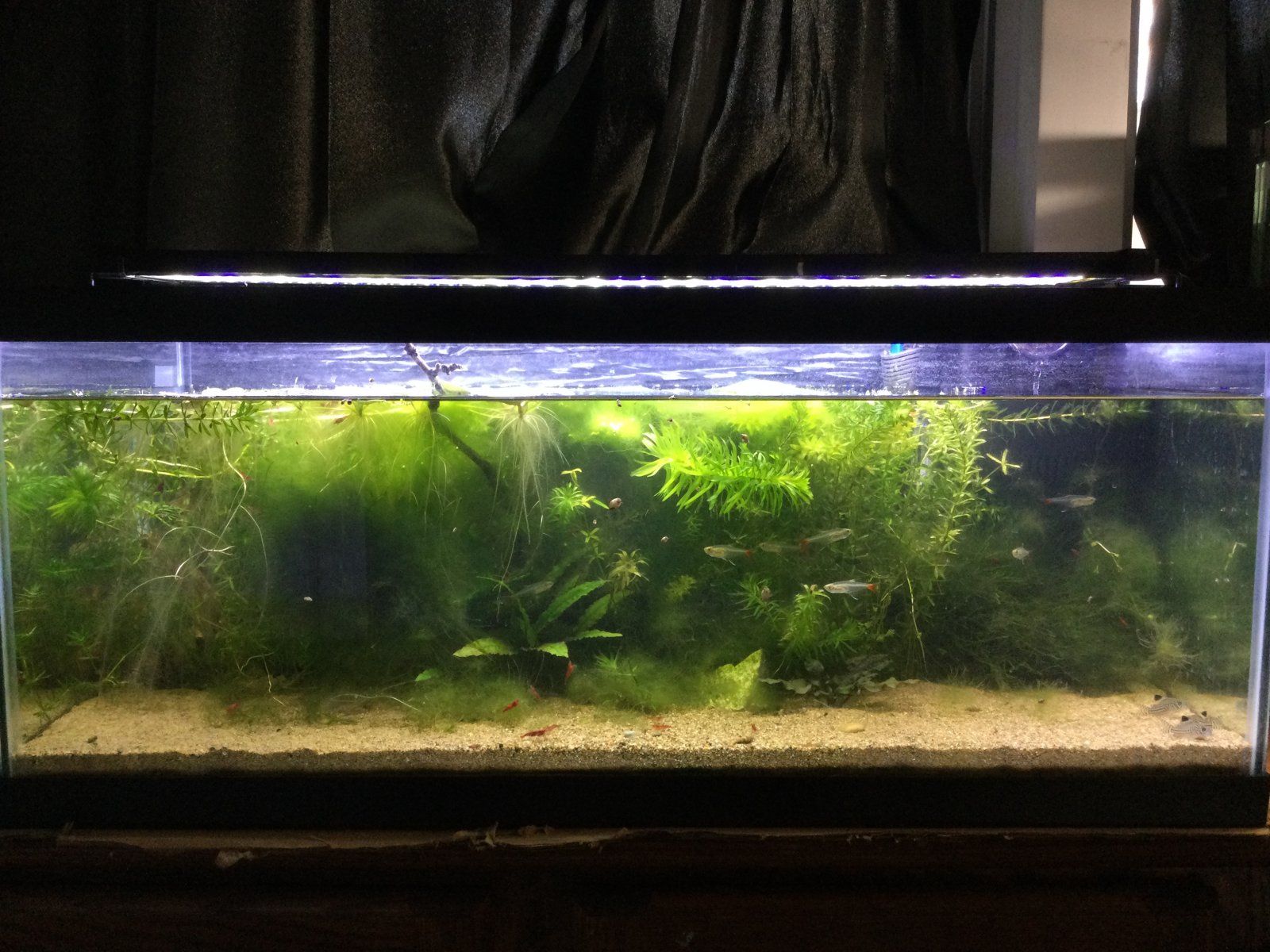 Frogbit is doing good, as usual: 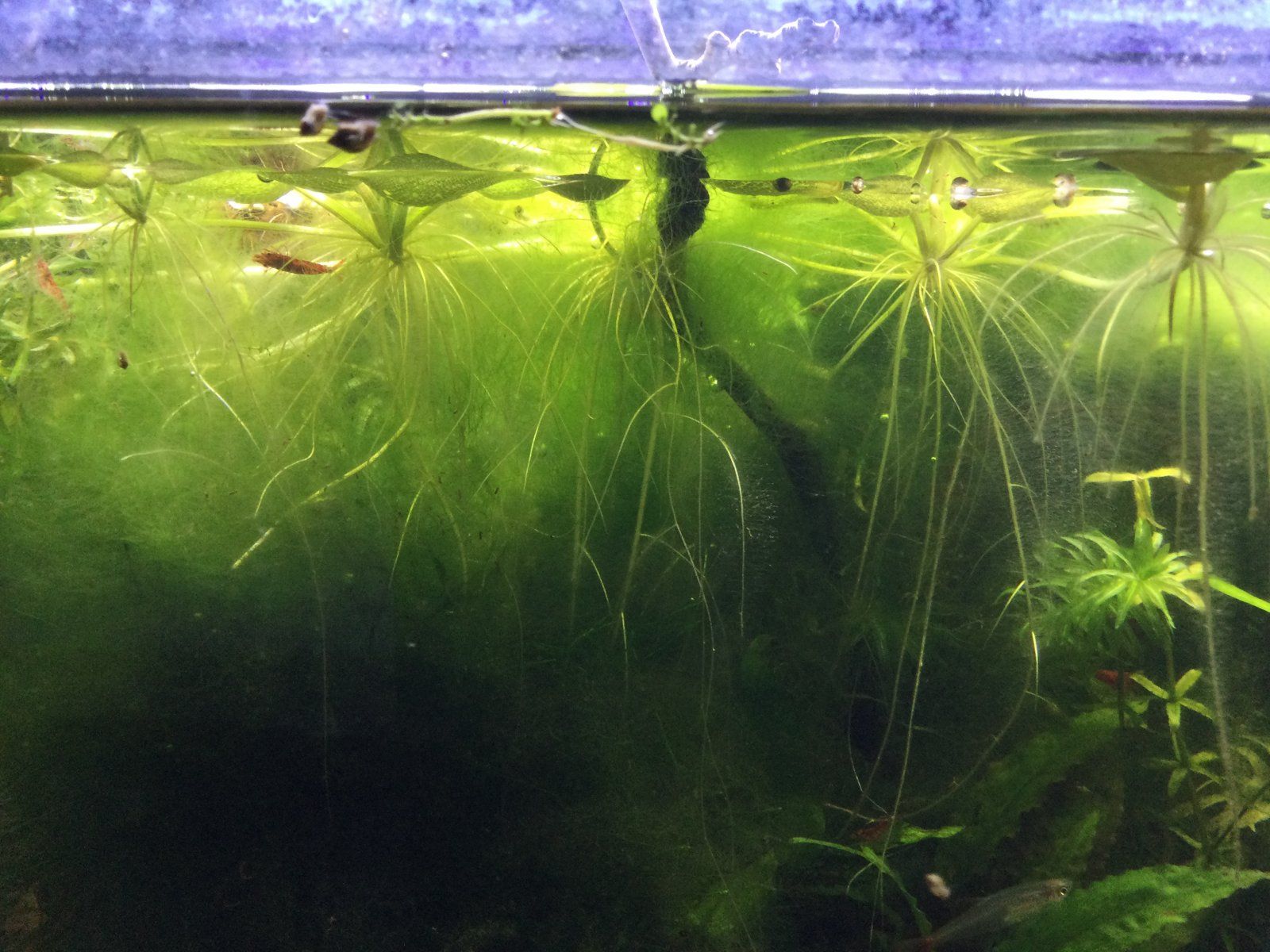 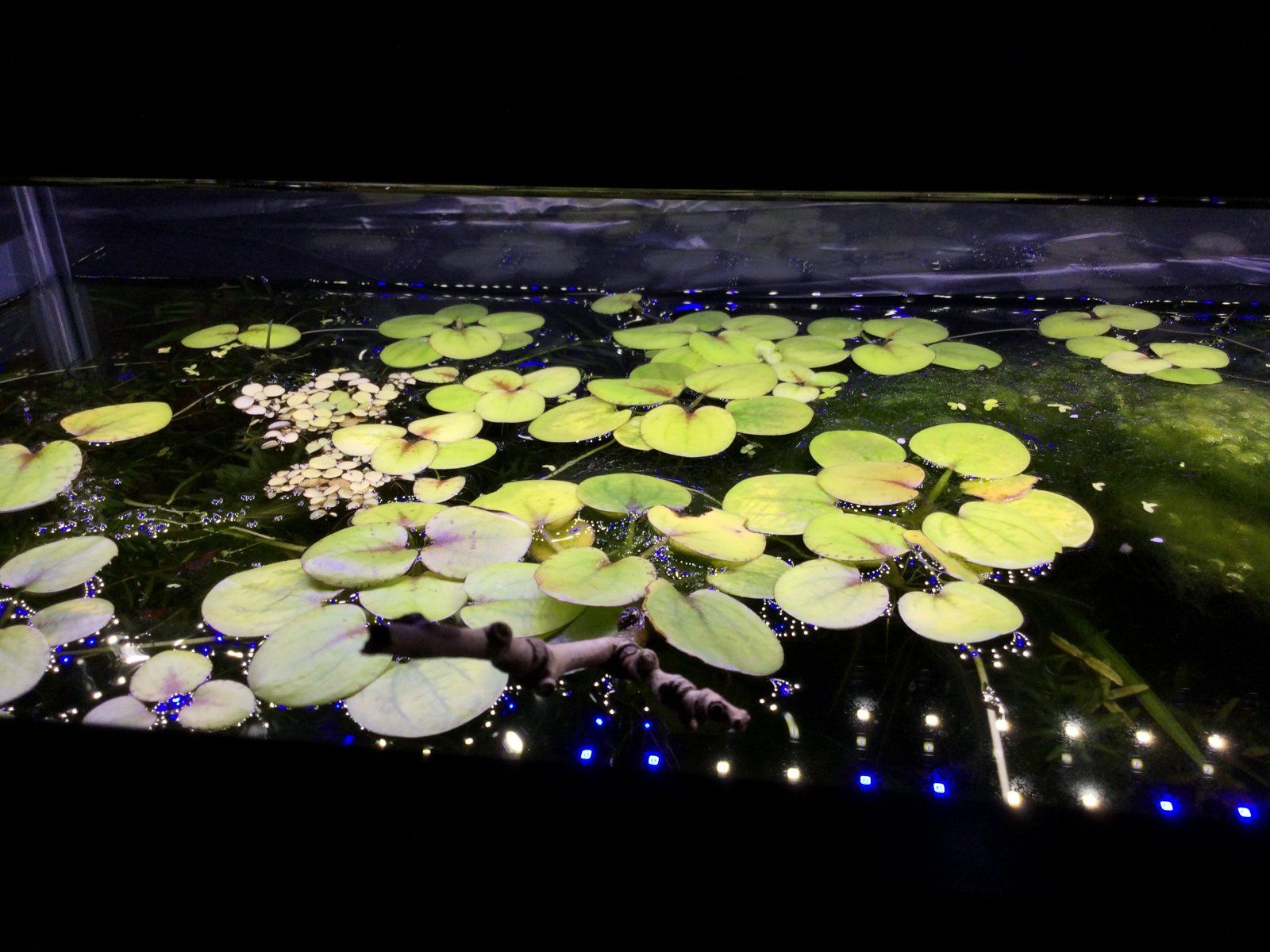 Plan for today is:

Remove the remaining algae, trim some plants, re plant some of the trimmings from last week, add more water, and clean the glass.

Does anyone know if I can trim the frogbit roots safely? I love the roots, but this particular one looks ugly: 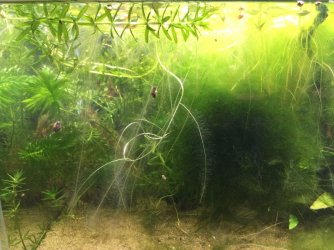 Ok, upon reading an old thread, I’ve decided not to trim the frogbit roots. @Byron didn’t recommend, because it’s their only way of gathering nutrients.

Still working hard on the tanks!

I trim the roots on my frogbit every week during a water change. I read what Byron said but in the end I had no choice but to trim the roots. It's the only way I can keep them under control. I break them off so they reach half way down the tank and by the next week they are touching the bottom of the tank again. This happens in both tanks.
There is virtually no water surface visible, it is covered with plants. Every month I have to pull handfuls out. I find this easier if I separate the new plants from the old ones, the new plants are joined to the old ones by a stalk. If I left them all joined together I'd never be able to remove just the older plants.

This is my 6 gallon shrimp tank. The main tank also has frogbit but the plants are bigger in there - more space and more fish to make more ammonia. I tried to take a photo showing the roots but the light is too bright there at the moment and all I get are reflections in the glass. I'll take some more when it's gone dark.
If it grows this well with weekly root trimmings for months, I think it's OK to give the roots a haircut. 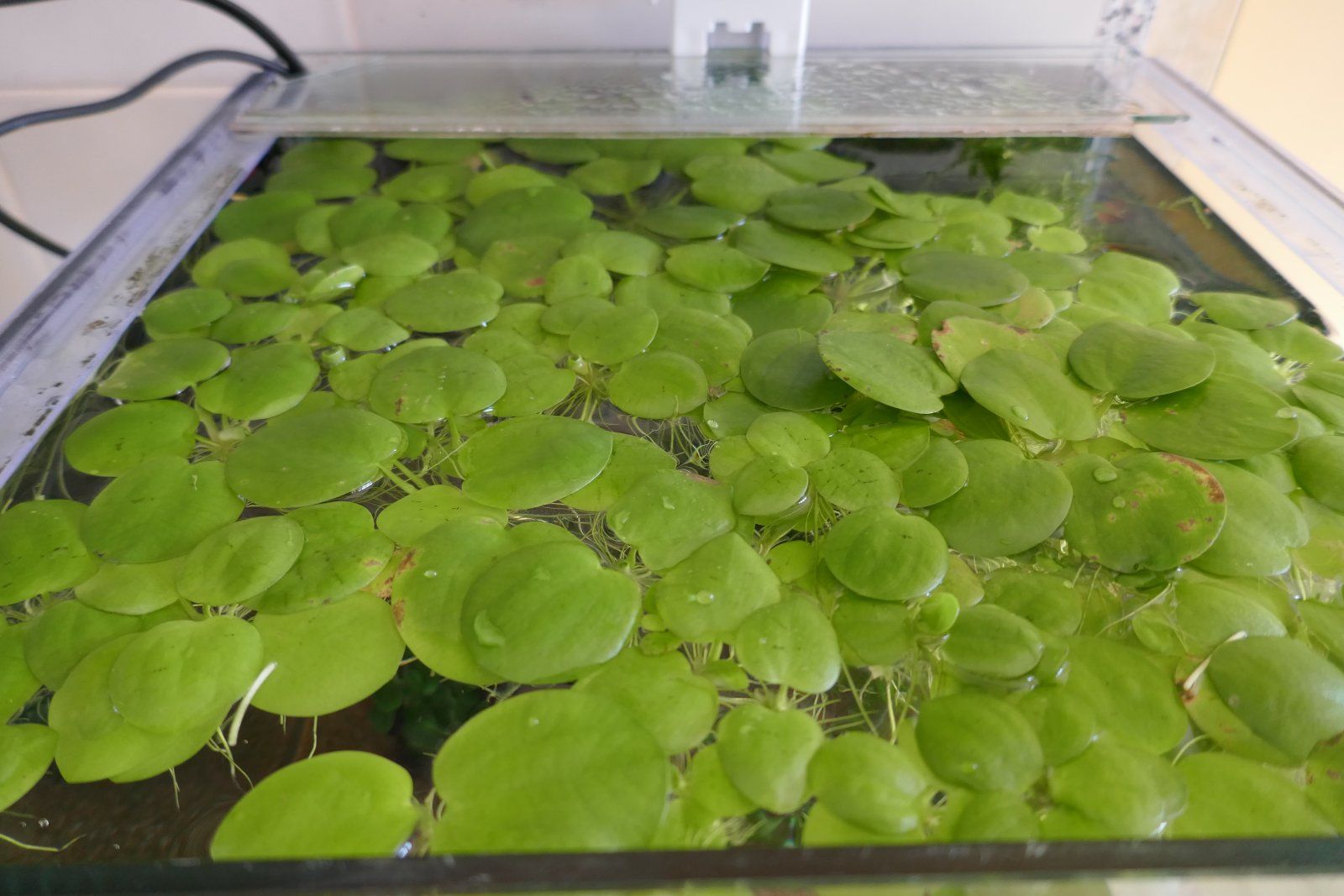 I removed the algae yesterday and filled up the water, but was unable to do anymore work on it. Hopefully I will have time to do it today.

Plan for today: clean the filter, (I believe that the long algae has clogged it, and it was just dribbling last night), get rid of the algae on the substrate, clean the glass, trim the frogbit roots, replant trimmings, and feed.

Been a busy day so far. I have been working on 29g hard today.
OP
OP 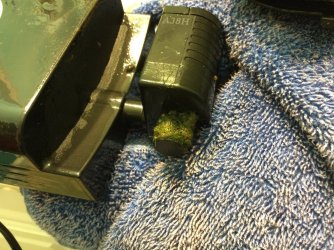 My suspicion was correct, it was the algae.

I still need to remove the algae on the substrate. Here is all of the algae I was collected from my 20g long and my 2so far today: 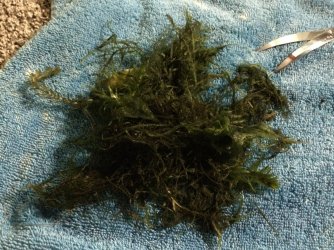 (Some Java moss and Anacharis mixed in there. )

My fish seem to trim my frogbit roots for me

In the tetra&cory tank the roots are nibbled at so they never get too long. In the barb tank, the entire frogbit plant gets munched.
Its a shame because I really like the look of the long wavy roots
You must log in or register to reply here.

crack in top rim of tank

How much General Hardness In Test Strip?

What could be causing this??? Damaged pectoral fin.