Hi everybody, I come to you today with grim news. I had been putting off a water change for the past few weeks (which we all know is bad but I couldn’t help it, I was so focused on school and balancing that, which was easily 10+ hours of that a day, even on weekends. Waking up late doesn’t help that either.) I feel this was probably some thing that happened for a reason, but last night I decided to suck it up and wake up early, in which I did, thankfully. I started to clean and such, but I noticed the fish were like this. I saw it and my heart immediately sunk, I think I have a feeling that it’s dropsy? They were lethargic, no signs of pinecone.

betta 1: The sicker of the two. He is on his side most of the time, I’ve seen him get a breath once though. If anything, I think that during the “dark days”, he contracted the sickness and conveyed it to the other betta (its a divided tank).

betta 2: clearly stronger, upright and moves a bit. Both fish have lost fins during this, which is just-

I’m gonna fully acknowledge that this is my fault, even if I didn’t intend so. Just to put that out there. I’ll get the necessary tests and such when I’m back from church. I’ll see if I can post videos, as well.
OP

look who decided to take a breath!

Quick little update : I've added aquarium salt into the tank. The healthier betta seems to be moving around more now. The sicker one is kind of moping around, some sort of activity.

It may be a case of nitrate poisoning. If water changes were put off for a bit, nitrates could have crept up higher than theyre used to.
Fresh water will do them good, but do a little at a time to prevent shocking them
OP

NCaquatics said:
It may be a case of nitrate poisoning. If water changes were put off for a bit, nitrates could have crept up higher than theyre used to.
Fresh water will do them good, but do a little at a time to prevent shocking them
Click to expand...

Right. Giorgio, the sicker one, shows signs of recovery then goes back to being lethargic. It's quite odd. It's happened like twice today. I plan to probably do a 20% water change daily for the next two weeks? Would I have to add aquarium salt to the water daily or am I good. Armani, the healthier one, seems to be almost back to normal, though he's acting lethargic right now. I just fed them frozen bloodworms : Armani ate two (out of my hand!), spat one up but I think he ate it again. Giorgio ate one (I had to wiggle it with my hand to get him interested) and then refused to eat a second. I really do hope they're doing well, but at the same time I'm ready that at least one of them may pass through the night. I've also been told that it could also have been ammonia poisoning, which explains the loss of finnage.

Here's an update from when I saw them active earlier (like maybe 30 minutes ago?):

Id keep some salt for them yes.

When you test your water, post the results?
OP

NCaquatics said:
Id keep some salt for them yes.

Right I'll be sure to do that tomorrow.
OP

Giorgio and Armani are seeming to perk up, but now is the time I turn off their tank lights.

I decided to test the water tonight. I'll have to go pick up some RO/DI water from the LFS since my water is hard.

A little update before sleepy time. Did a water change today. Armani seems to be doing better, but still seems week so he's still in the cup. He did eat two bloodworms at feeding time tho! Giorgio ate one, refused to take another. He's been lethargic most of the day as well.

Domestic bettas can handle up to GH 300ppm as per seriouslyfish.

NCaquatics said:
Domestic bettas can handle up to GH 300ppm as per seriouslyfish.

What id do us get some Prime dechlorinator until that ammonia is totally 0 and use that for the water changes
Click to expand...

I do use prime, actually.

Can you convert the 300ppm into the values that the API test kits use?

Do they use DH? What unit do they use? (Never used the api gh test) 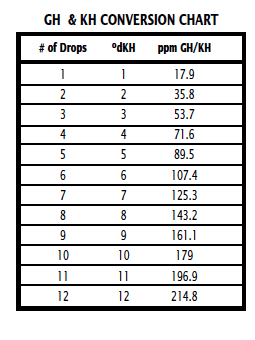 V
Returning to the hobby

Yesterday at 5:04 PM
Vicko
V
S
Is winter an "off season" fish availability-wise?