OK, got done with the small changes and confirmed that shrimp all went poof. So here are some before and after shots.
Before 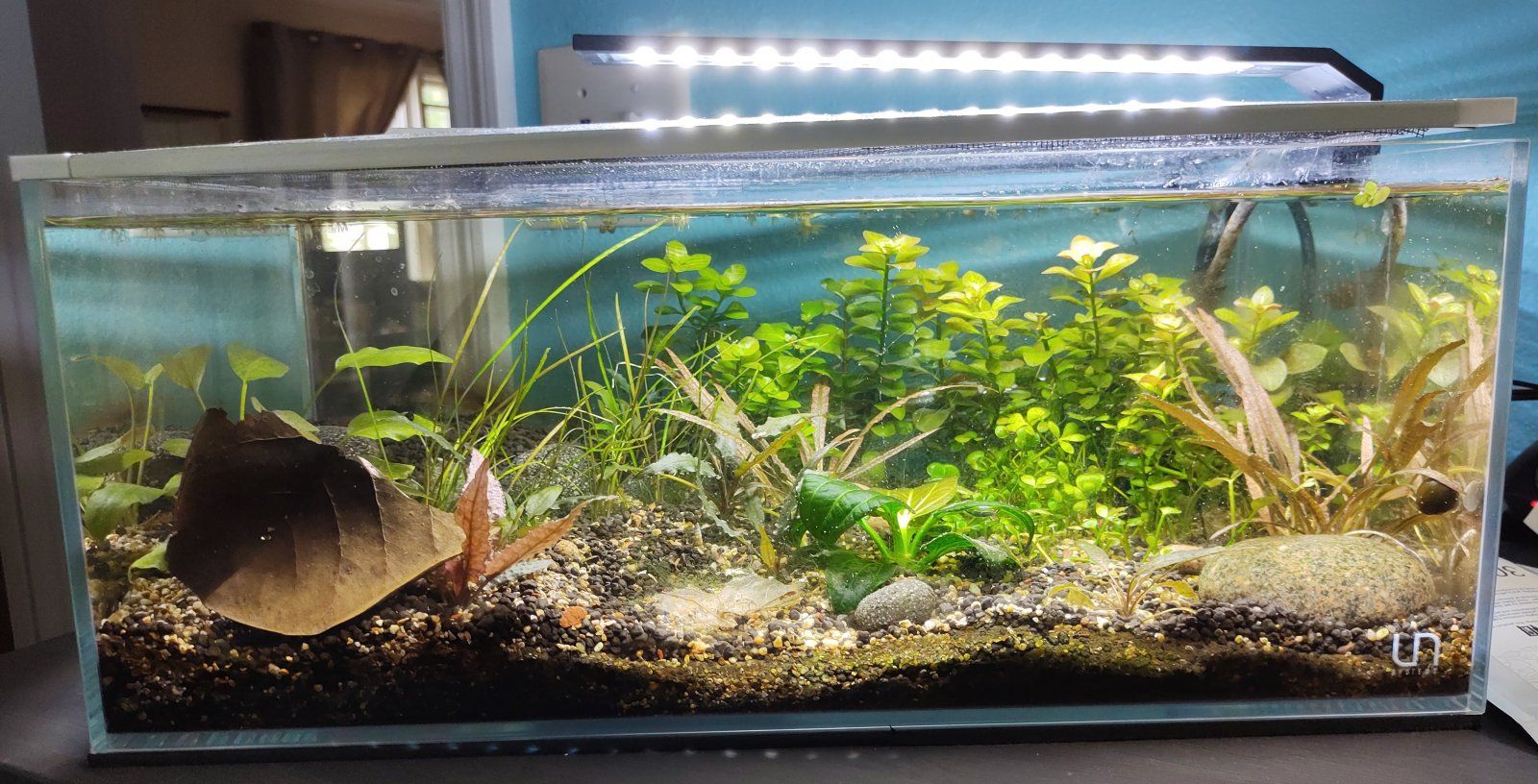 So I can;t get the underline to stop, lol. Anyway here is my Igawazu 2009 sword when I first put it in the tank. 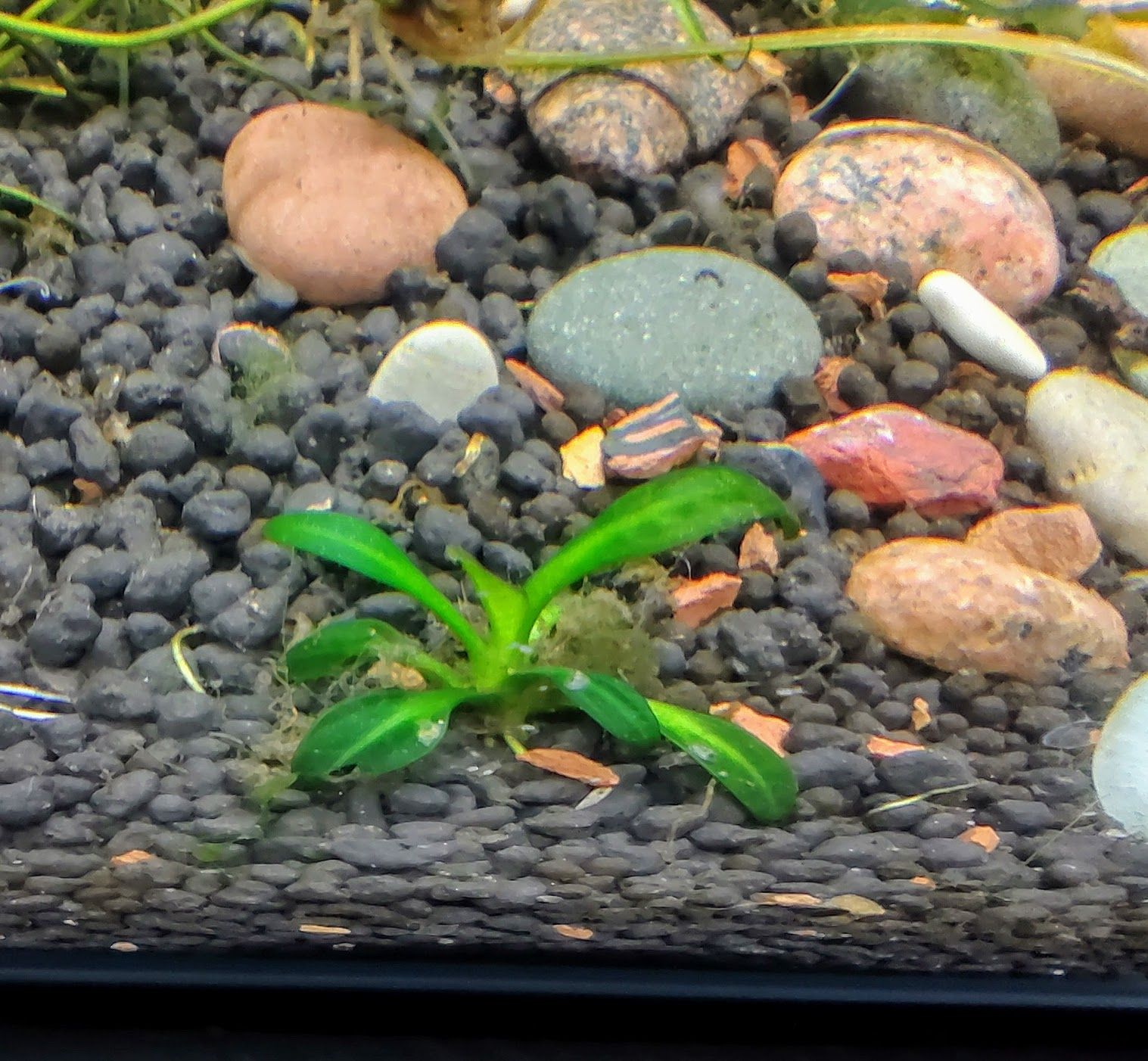 Here it is today 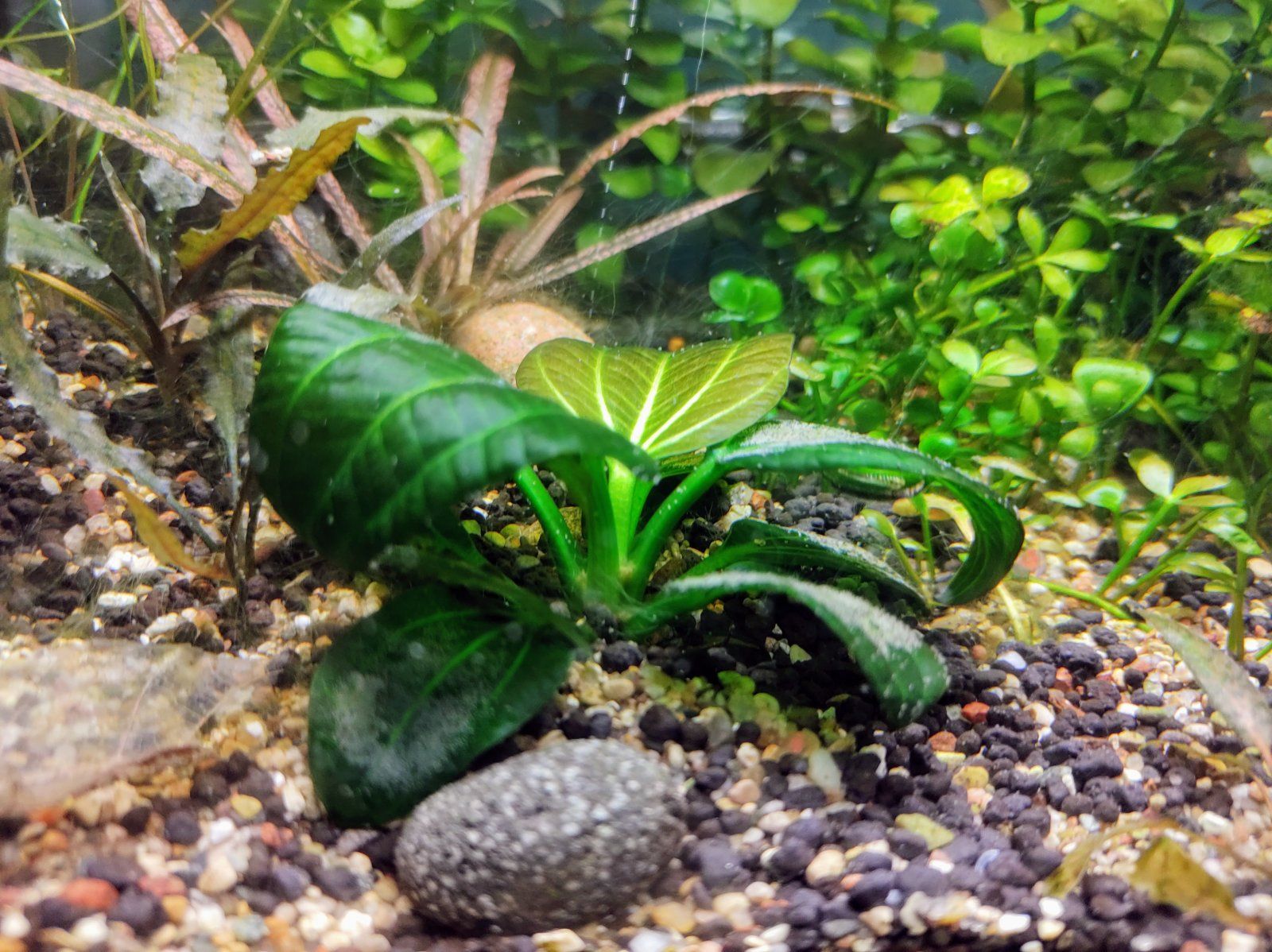 This is where I had some stem plants that started to not do so well so I pulled them out. 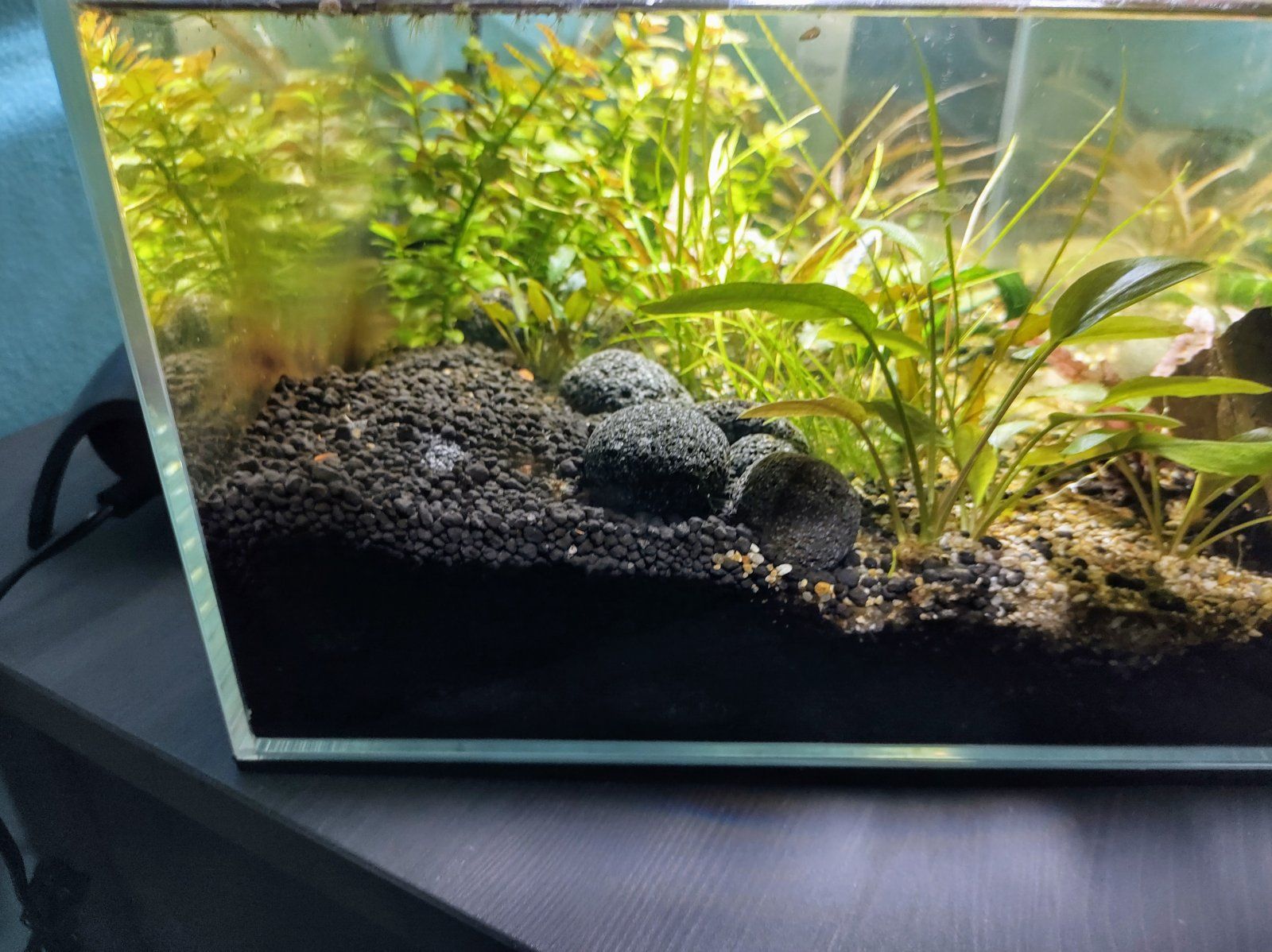 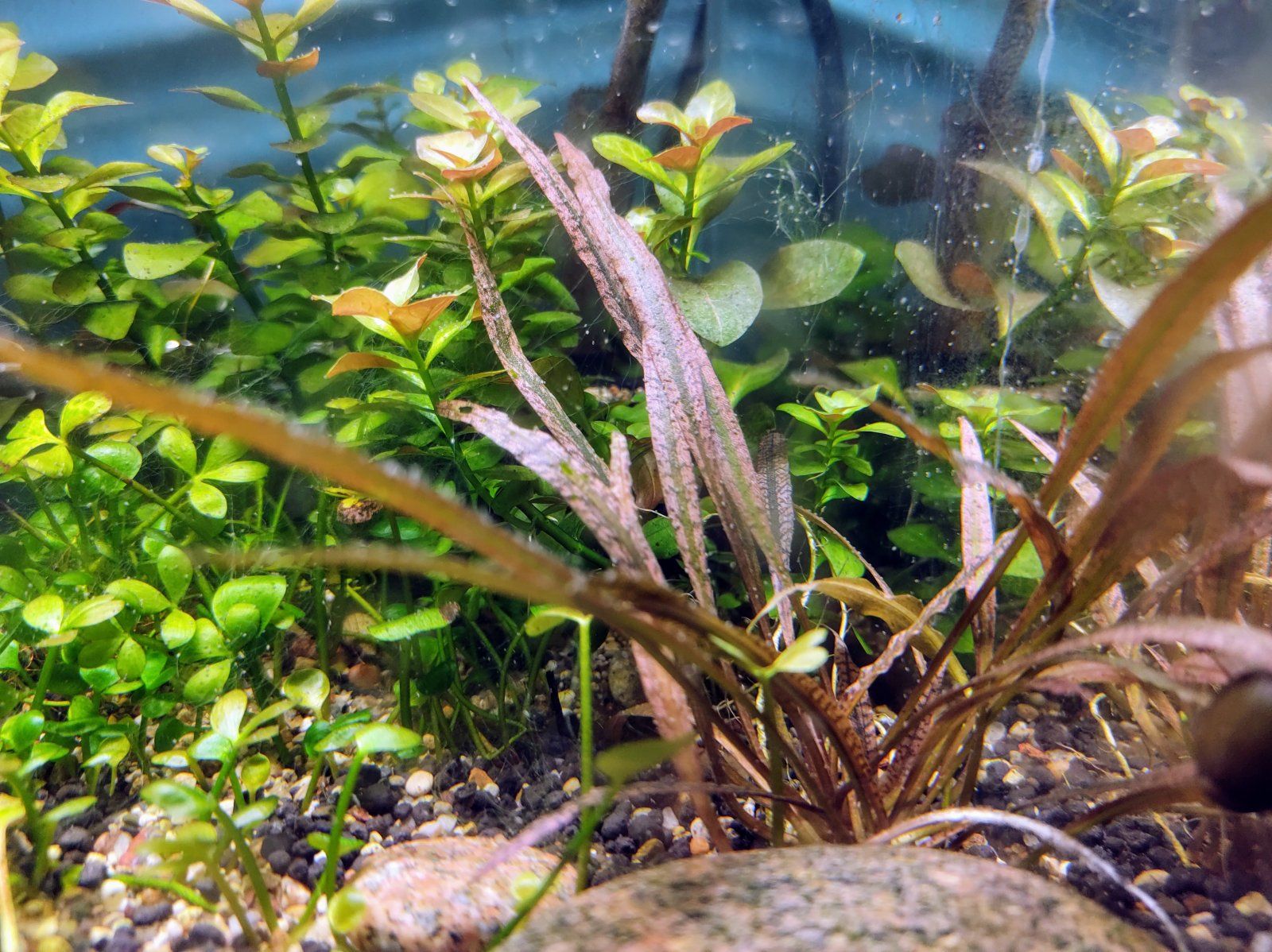 You can see the c. tonkinensis-its the crypt with the long grassy-like leaves behind the spiralis 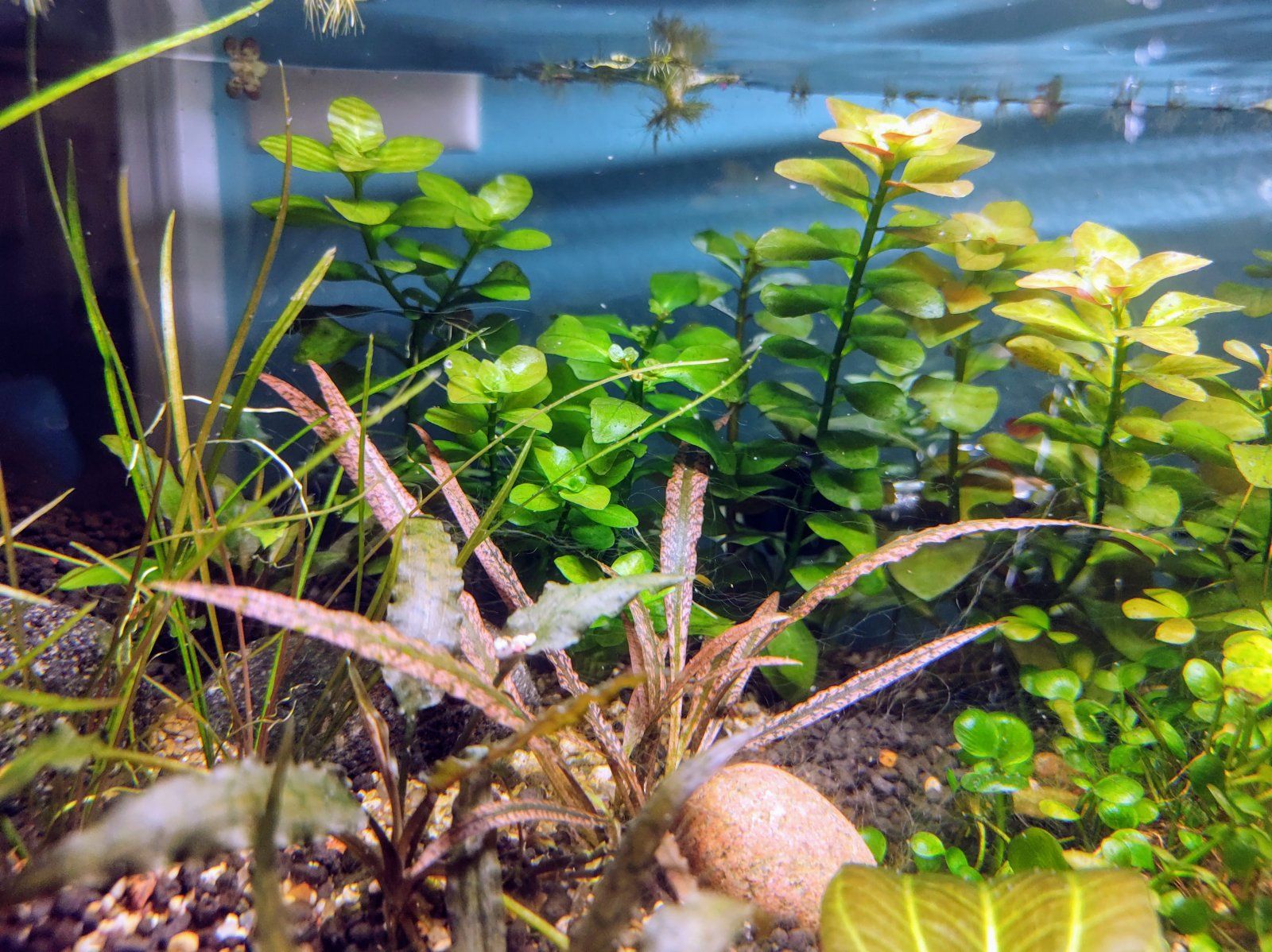 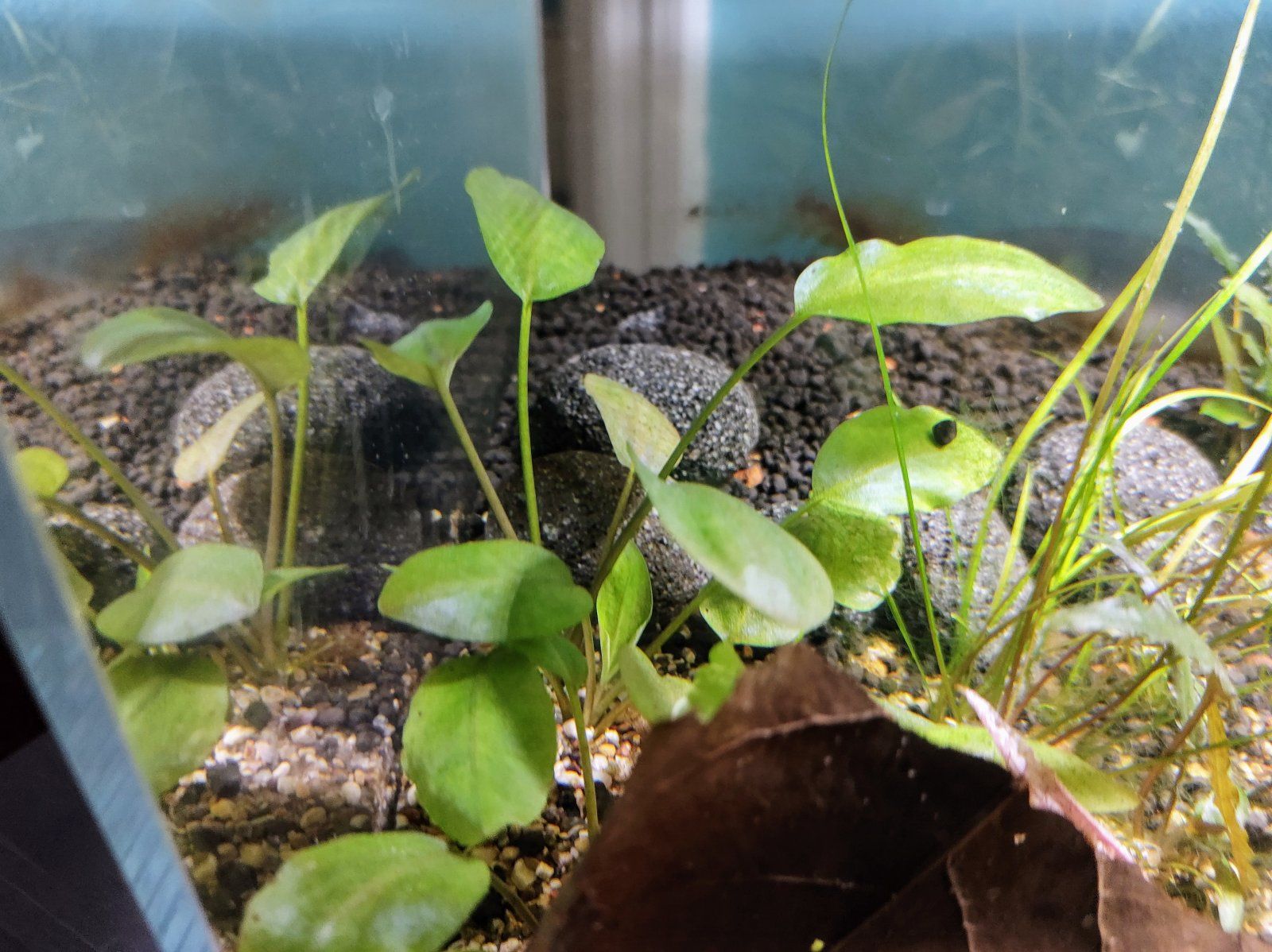 Here is the after.
I moved the Igawazu to the back open ares, pulled the c. flamingo from the left of the tank to where the Igawazu used to be. Also pulled 90% of ludqwigia and marsilea. also moved the marsilea to the back. The two new spiralis went in front of the heater and the marsilea. Its still a little cloudy due to pulling the plants out of the substrate. 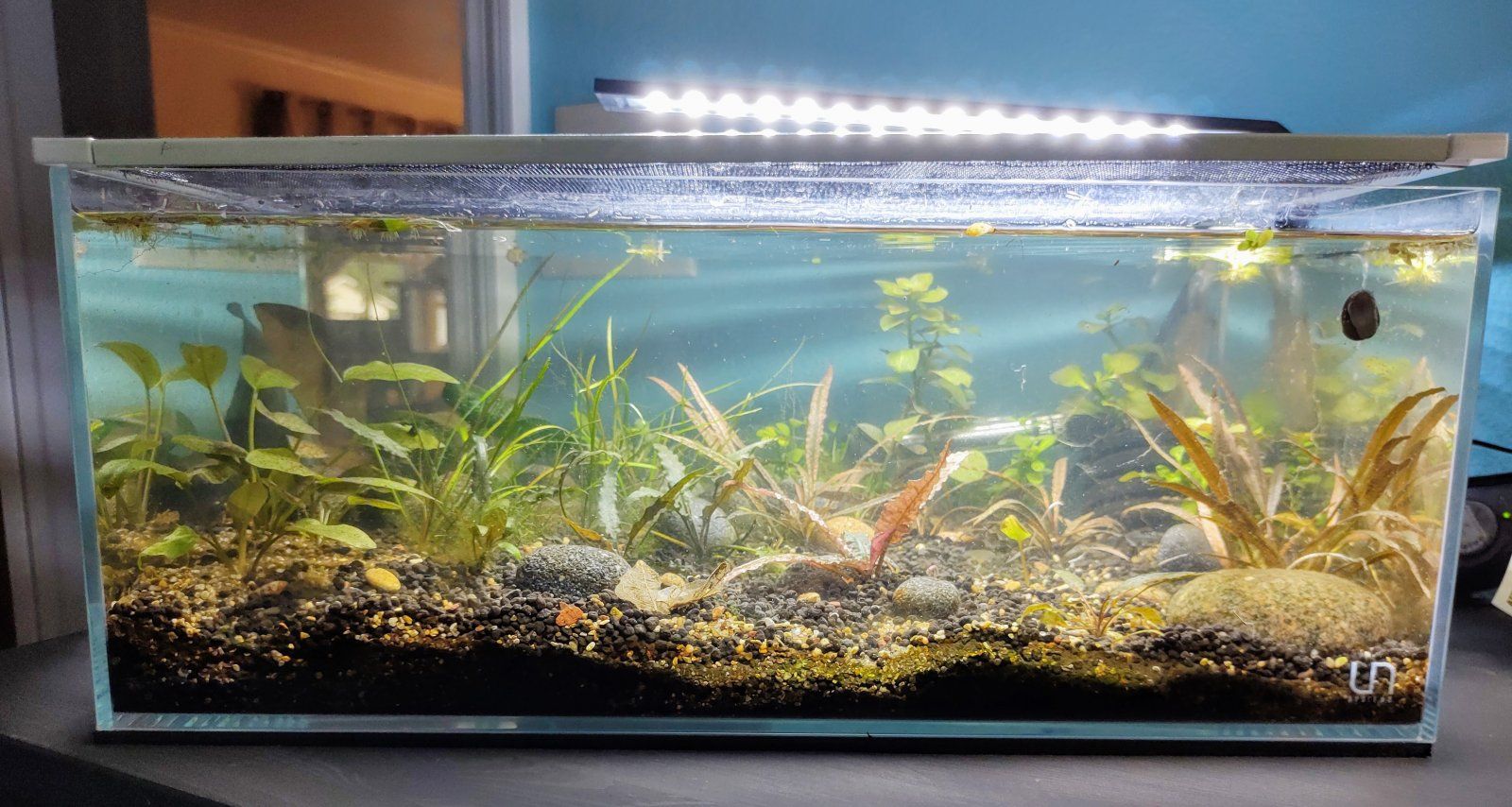 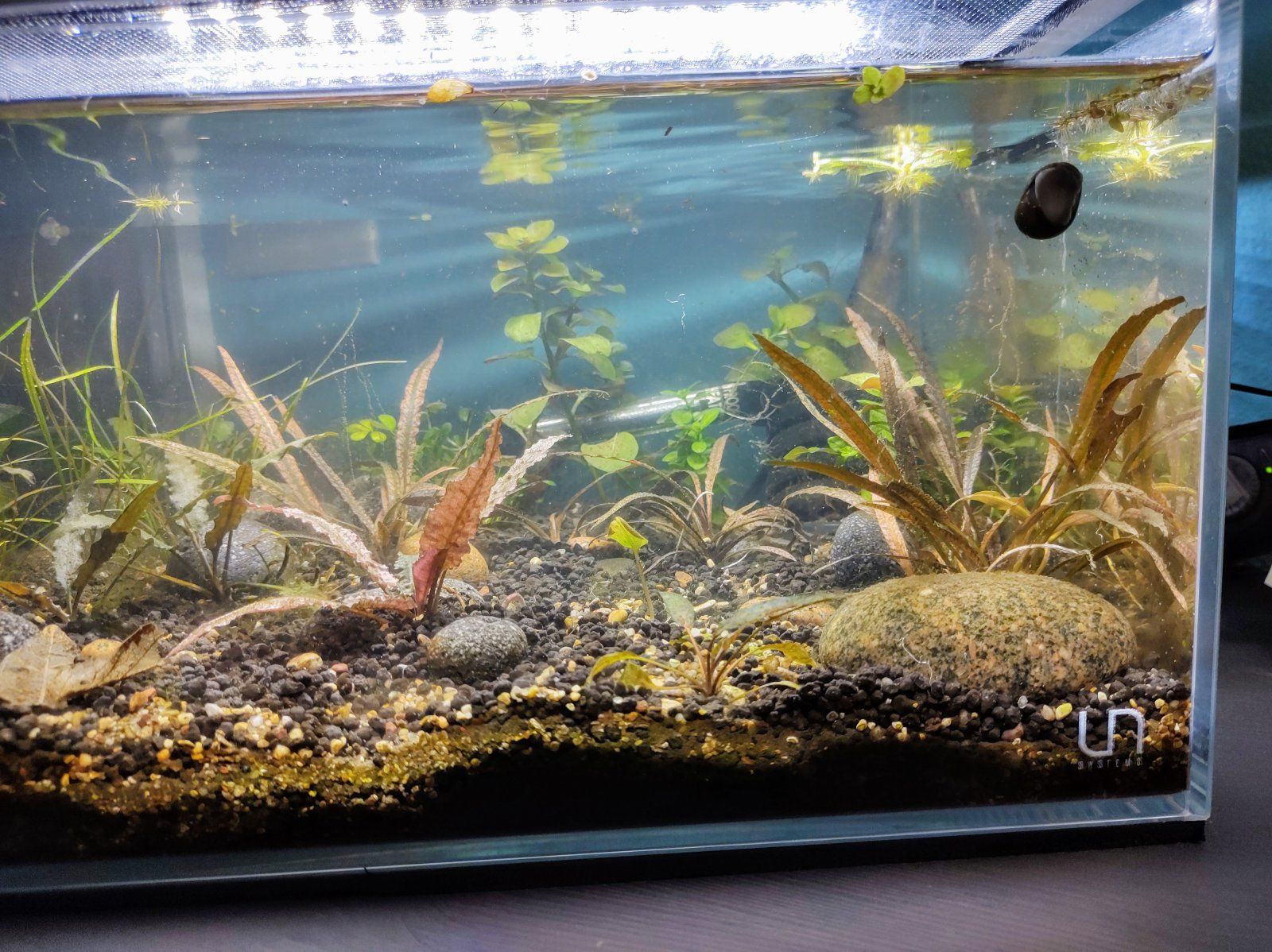 I left the meeboldii alone, it is doing well were it is and being a relative to crypts (but with a rhizhome) it also can melt if disturbed. 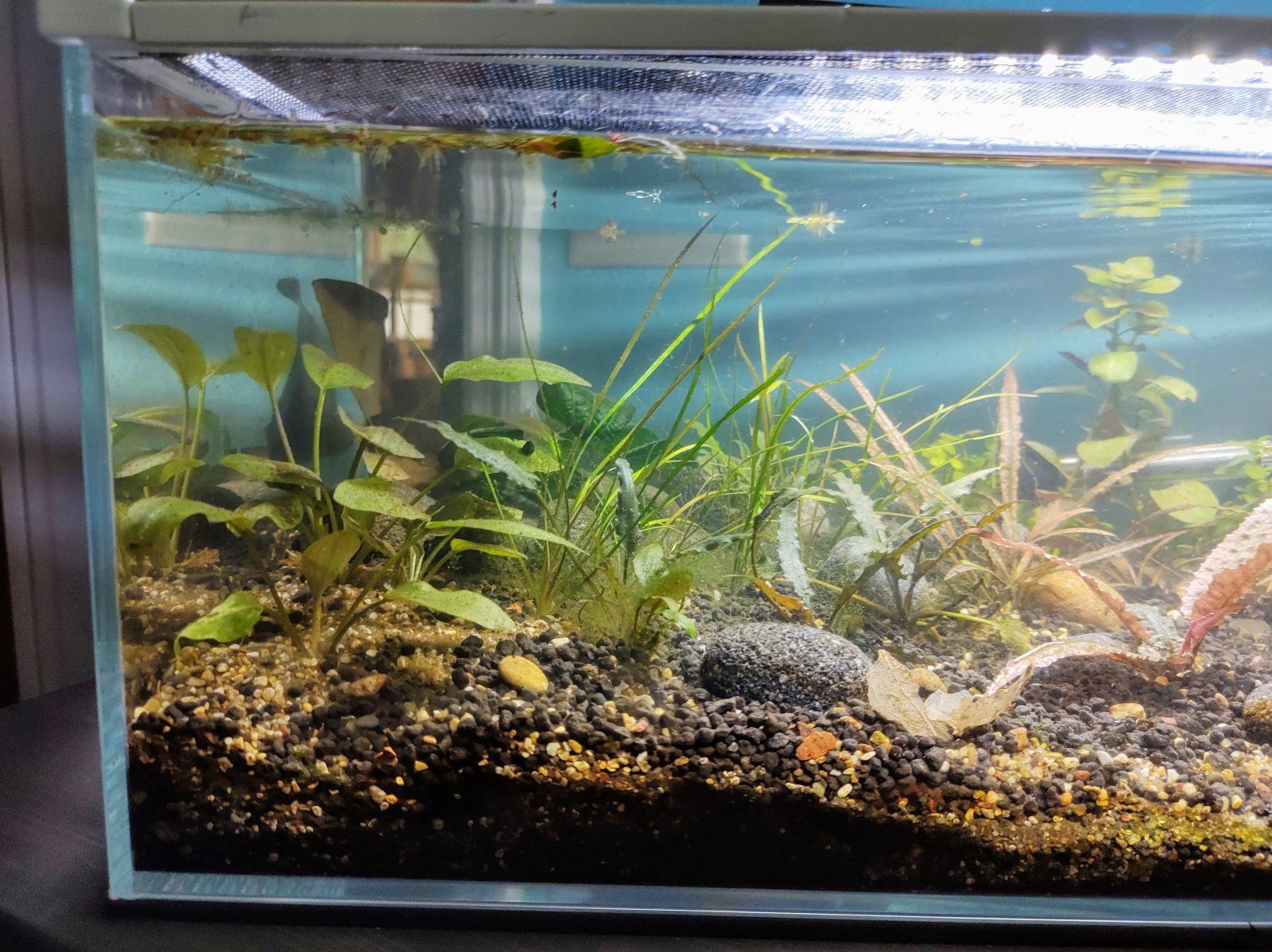 Here is the Igawazu, hoping it still grows well. Unsure why the leaves have a burned look. I did add a flourish tab in the substrate to keep it going strong 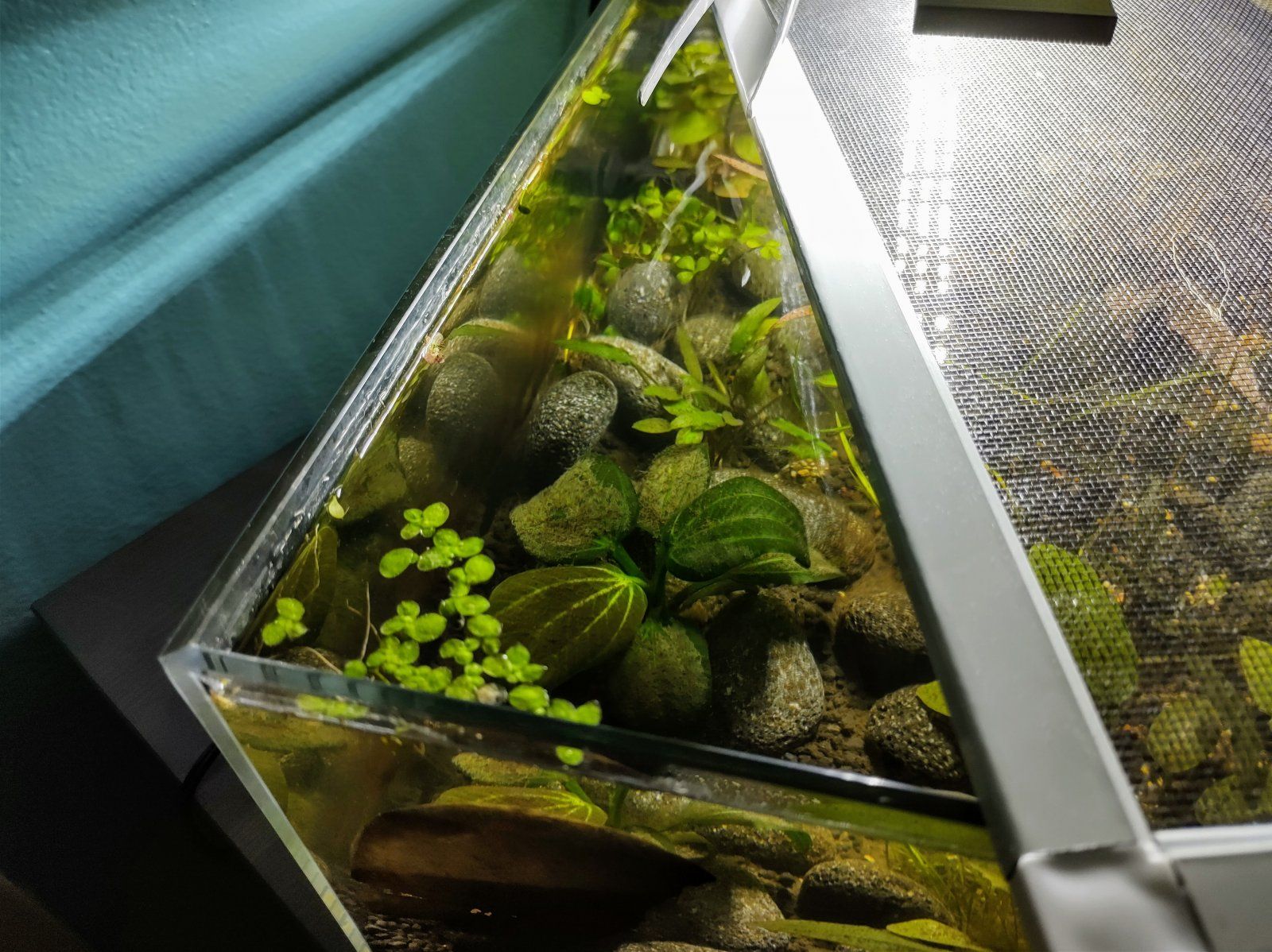 Showing you the removed stems and the baby spiralis. Added a nerite to help deal with the diatoms that are coming up a bit late for this tank which isn't too new. 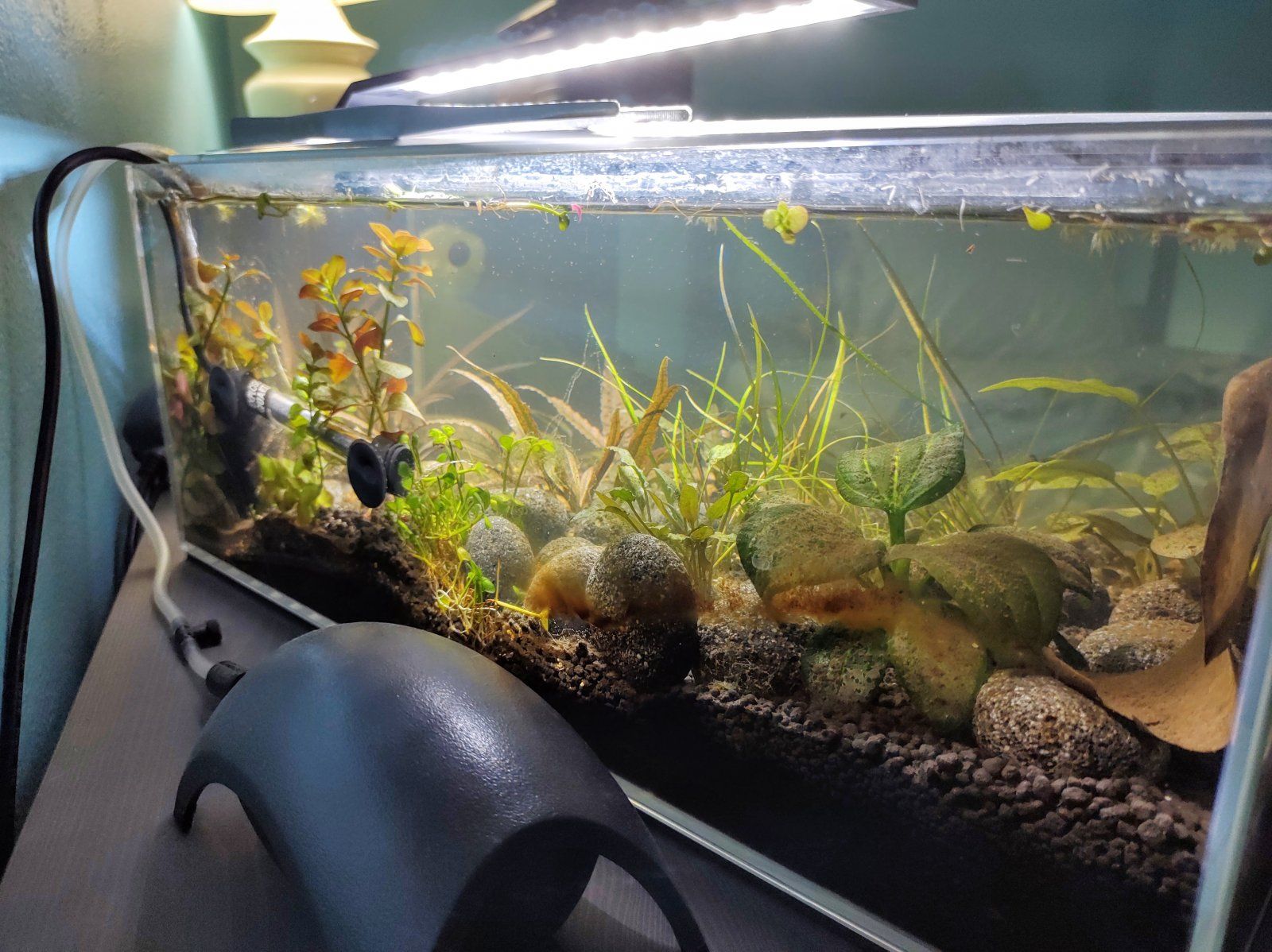 Want to get some b. hendra for the tank but they are out of stock. Close second and in stock is b. uberis, both stay small, love low pH and will work as a pair in a tank this size. Will be adding some leaf litter and red rooted floaters to the tank in the next weeks or so. All of the small tumbled lava rocks were hiding under the substrate and as they may have some (minuscule) BB I decided just to incorporate them to the layout. I may move them around as the water clears more

Boundava said:
OK, got done with the small changes and confirmed that shrimp all went poof.
Click to expand...

Wait what does that mean? Did they all die, jump out or just *poof* ?

Also what will you be adding next?
OP
OP

To be perfectly honest I have no idea what happened to them. I had 12 and once I put them in the tank they distributed, the tank was pretty heavily planted at that time with the stem plants towards the back and the corner. There was a lot of algae in there and a lot of other biofilm for them to feed off of. I would see one or two but I would never see the whole group of them together and then eventually only would see one and for the past couple days I haven't seen anything. That was confirmed yesterday when I rearranged some plants, pulled some out, and added a couple. I have not seen any bodies I have not seen anything outside there's a screen top so unless they could climb up the glass sides and dump, but I haven't seen any bodies outside the tank. So I have no idea what happened to them. As I mentioned above my next idea for the tank is going to be a pair of wild bettas either the Hendra or the Uberis. I currently have one in there right now and there, he / she is doing some clean up duty on the hair algae and diatoms on the back wall of the tank.
BTW I checked the water parameters daily and it was always within the specifications for Galaxy shrimp. So I really don't know what was up with them.
OP
OP

Well it's not a shrimp tank anymore.
Some pics too... 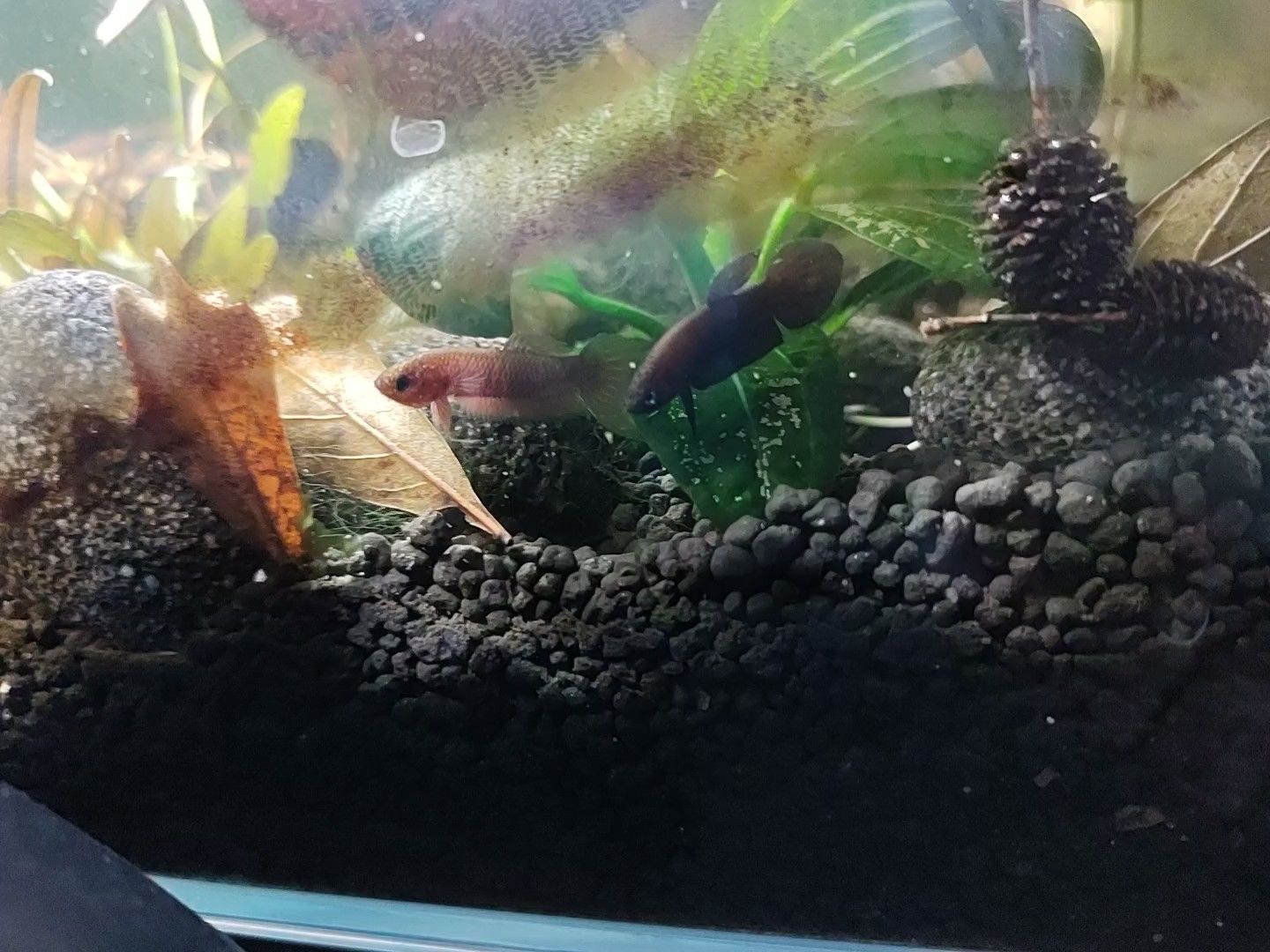 Can a mod chang the title to:
Rimless C. Miniopinna Betta Tank?


They just came today and are a M/F pair. I added some leaf litter and alder cones last night for some tannins. Amazing how fast the alder cones stain the water.
Last edited: Jul 14, 2021

These guys are the size of adult cherry shrimp right now, so tiny! They are feasting on some copepods in the tank, I also dropped some blackworms in the tank for casual browsing (blackworms can live in the tank without spoiling the water).
Can't get over what little gems they are!

On another note the film on the Igawazu leaves was some type of hard deposit that I was able to 98% scrape off with my nail (gently of course). Glad it was removable as I would have hated for it to loose so many leaves.
Last edited: Jul 15, 2021
OP
OP

These guys are the size of adult cherry shrimp right now, so tiny! They are feasting on some copepods in the tank, I also dropped some blackworms in the tank for casual browsing (blackworms can live in the tank without spoiling the water).
Can't get over what little gems they are!

On another note the film on the Igawazu leaves was some type of hard deposit that I was able to 98% scrape off with my nail (gently of course). Glad it was removable as I would have hated for it to loose so many leaves.
Click to expand...

Well I redid my room a little bit and decided that I wanted to get the tank off of my dresser as closing the drawers kind of freaks the little betas out a little bit. I found a deal at Goodwill and repainted it. I'm going to give it 48 hours to fully dry and then I'm going to spray an epoxy sealer/finish to waterproof it a bit and then I will move the fish tank to it. It's only a 6 gallon tank so I should be fine weight-wise. Plus it has a little drawer which will help me keep the miscellaneous fish supplies that I have contained. 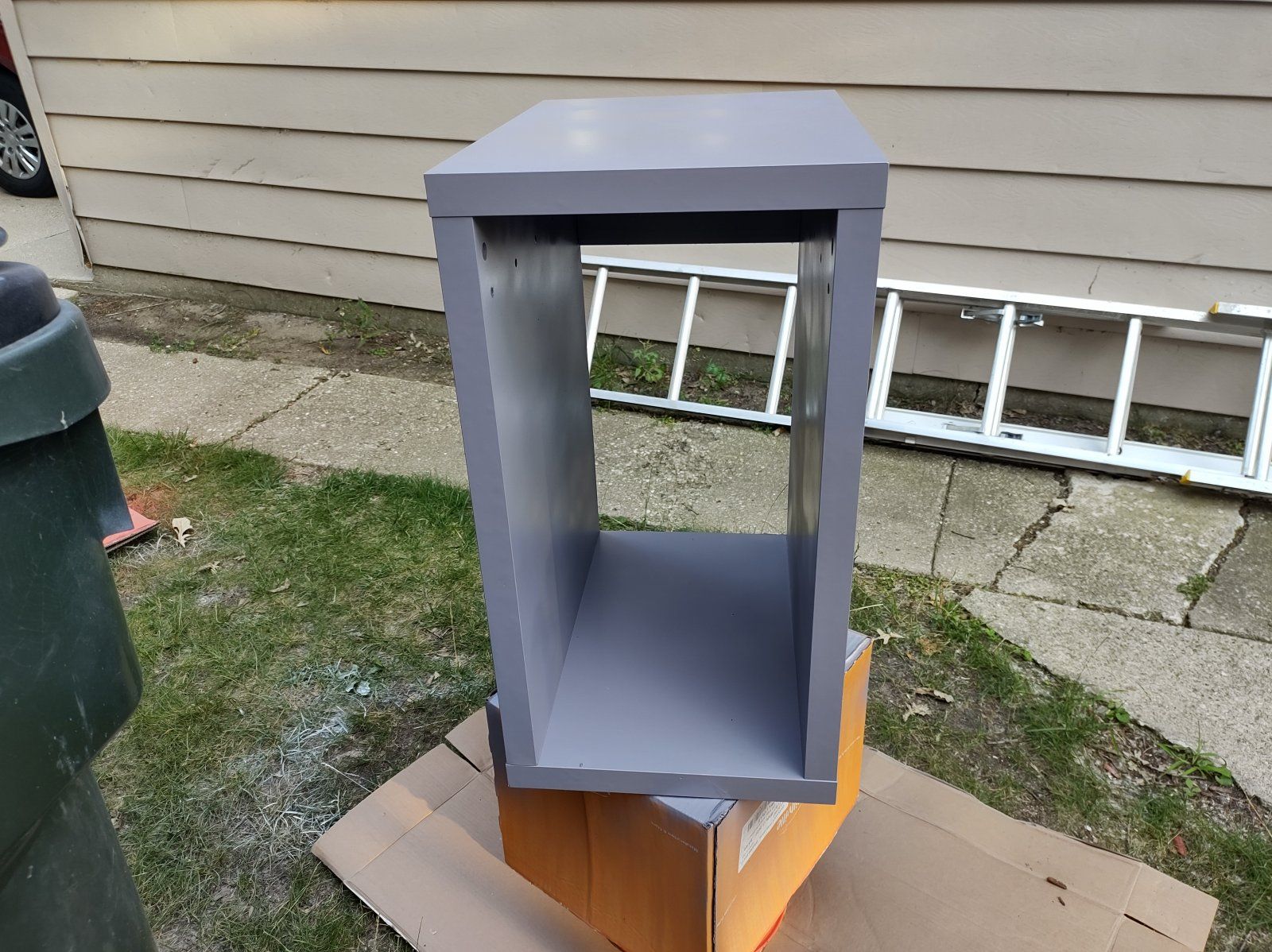 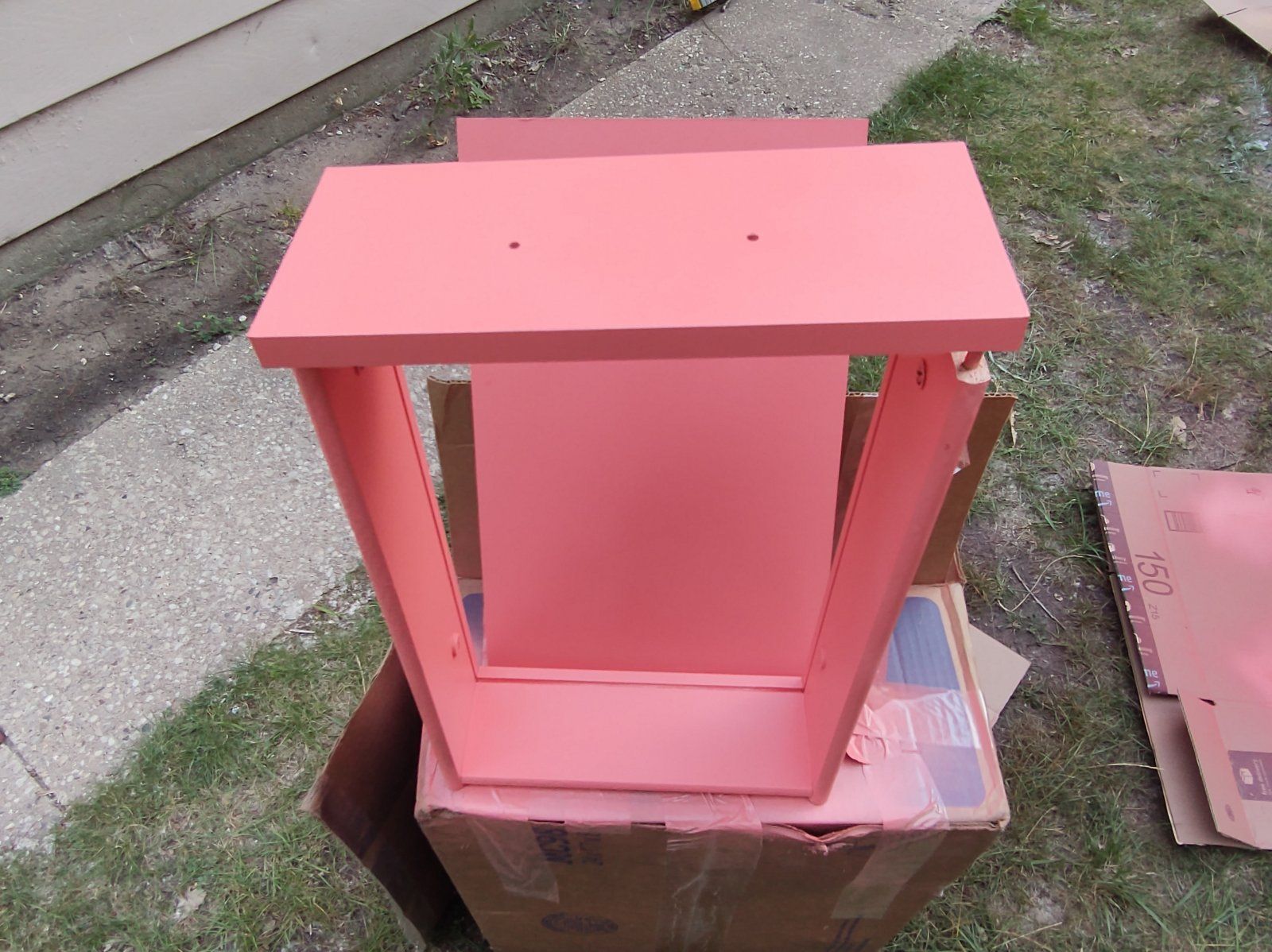 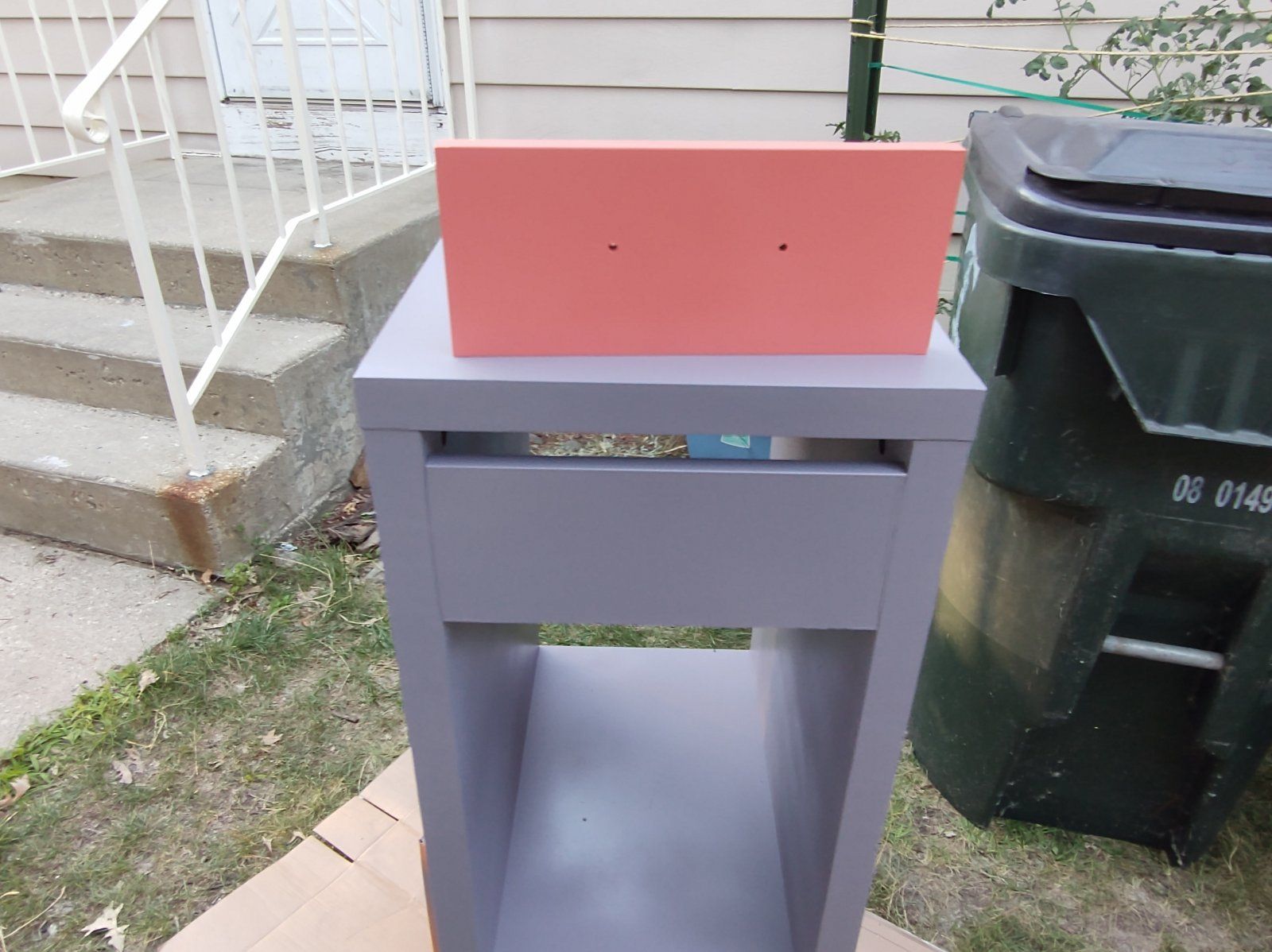 Crazy heat/humidity has put a temporary hold on finishing this. It is supposed to be perfect Friday, so we will see. Only thing I need is the clear coat sealer to make it water resistant, and then to put the drawer back together and the drawer's hardware.

The little bettas are doing so well, I have a tone of copepods in the tank and they are hunting them down daily. I have given them blackworms which they ate. also bought some bloodworms, which they didn't eat. Both the male and female are just a gorgeous red with blue and the male has more blue and a slightly deeper red. Both have the prettiest reflective blue eyes.
OP
OP

Well this tanks has gone through a lot of changes. Betta's have been moved to a 5 gallon blackwater tank and have had babies, lots of babies.
I tried adding in some orange tiger shrimp to the rimless. Thought they died off, so I added some tiny tetras (green, gold and albino) and lo and behold the shrimp made a comeback (along with a mean case of ramshorn snail explosion). My plants have also done well and my tiny Igawazu 2009 had exploded into a very large and beautiful sword. Cannot believe it was smaller than my thumbnail when I first planted it in here.

crack in top rim of tank

How much General Hardness In Test Strip?

What could be causing this??? Damaged pectoral fin.