We have a winner in Fishforums.net
October 2022 Tank
of the Month Contest​
We had 7 awesome tanks entered in this month's TOTM contest featuring tanks sized at 17 to 30 gallons but only one could win...
And the winner is.......

Herbibore
Let's all congratulate them

Here's the winning tank and its description​ 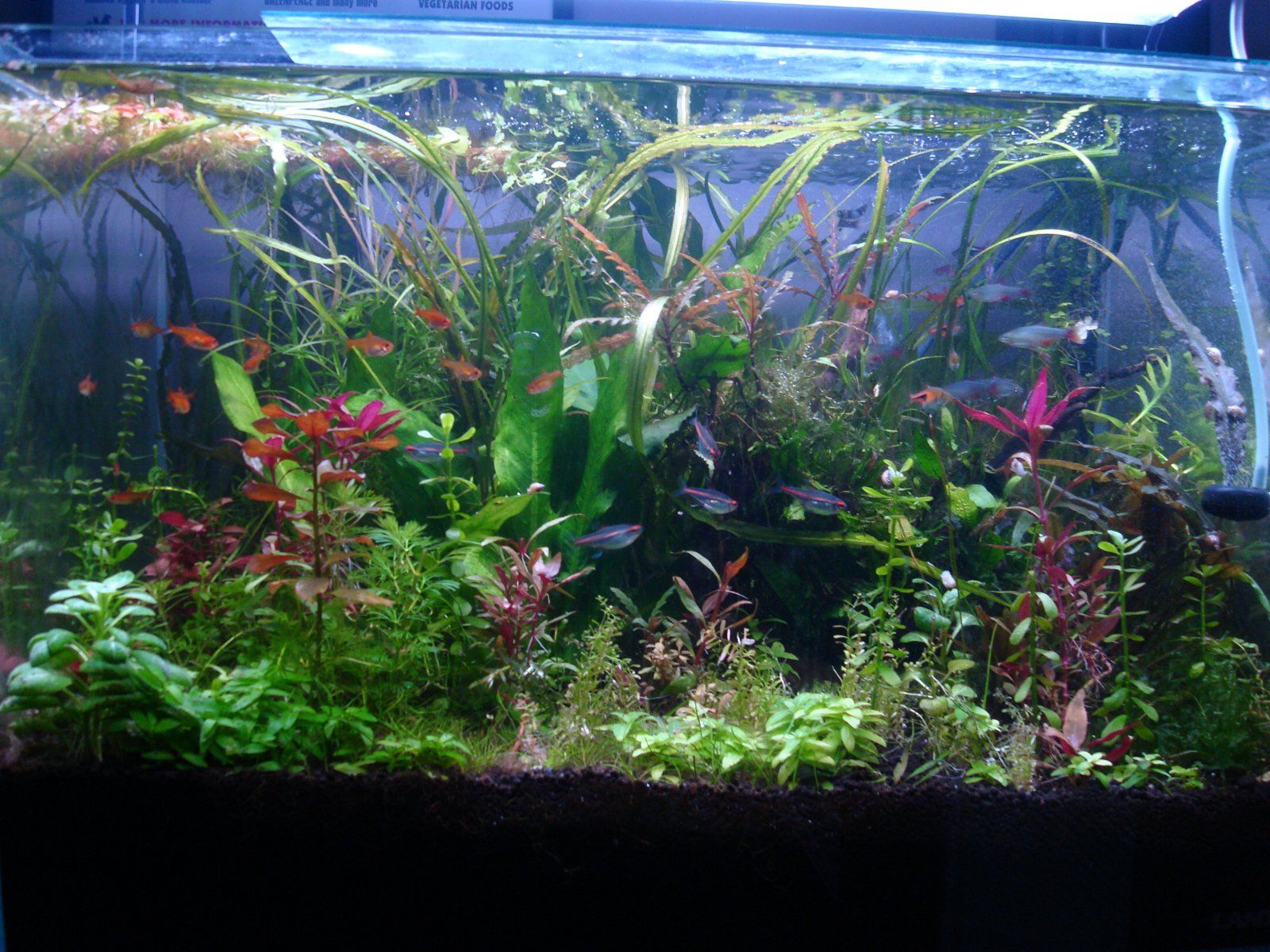 Here's my 29-gallon Landen tank, on a black Landen stand and with a Landen light on rims.

Last year I started my first nano tank (7 gallons) using tissue culture plants, and by the end of its first year, it was a mass of vegetation, making the 7 ember tetras and amano shrimp invisible. I posted a pic of that and my betta tank on an old thread buried deeply somewhere on this forum.

So this June (4 months ago) I transferred everything over to the new Landen (and cycled with the fish/shrimp, but using the old
HOB filter and all the year-old plants; no fish or shrimp were harmed in this transfer!). I was forced to do so as the old stand was buckling,
so in a way this was an emergency upgrade.

Along the way I bought 13 more ember tetras, making a total of 20, and added eight Harlequin Raspboras. Unfortunately, a blue tetra somehow got added to my bag at the LFS, and it was such a bully I added more -- but the bully drove them all of them out of the tank
except a huge one I suspect is a female. Fine. They hound each other now. The female blue tetra is on the right in the card pic; the smaller male, despite being the worst bully, is usually hiding in the vegetation, or in the back where I can't see.

Glass covered, I continued, knowing I needed bigger fish, so I added a troop of delightful bloodfin tetras (7 total); seven glowlights (of which two are "albino," even if they have beautful orange markings on their fins and eyelids); a few more amanos, not sure of number now, they hide well and some of the original are ageing; and five kuhli loaches who love swimming along the back of the glass. On the card pic, you can just barely see an albino glowlight in the dark beneath the central glowlight. Is that a bloodfin eye lower right of them in the dark area as well? A kuhli loach is somewhat visible doing a u-turn in the non-card pic -- they love swimming through the bubbles!

I have a Fluval CO2 95 gram dispenser (only 1bps) -- paintball, maybe, if I can get over my fear of CO2 cannisters 8'(. A thermo Oase Biomaster 250, plus a 30-gallon bubble filter, are hidden by the spiral vals, one giant sag, and ozelot swords in the back. Other plants are: s. repens, cabomba, scarlet temple plants, some newer Telantheras, both regular and windelov java ferns, some mini-bilbitos -- I hope, otherwise it is firm algae, lol -- two amazon compacta swords, hydrocotle, a sad attempt at microswords (the kuhli loaches won't let me root new things 8'/), susswassertang, a red ludwigia, and yesterday, some tissue culture rotala h'ra among the old dwarf hairgrass from the old tank. The old hairgrass is balding like my own head, so I hope to put it out of its misery when the rotala grows out.

Oh yeah, two types of bacopa, monarda and carolinia, both from the original tank's tissue culture, and some brown crypts. Finally, some more of the old tissue culture, cyperessus helferi in the back right corner. I leave a thick jungle in the middle back to hide the lily pipe and bubble stone, and keep it cut around for swimming space. Oh, I forgot, green cardinalis (another tissue culture -- started in the old nano, and sooo slowww to growww), and some water mistress that is cut back severely on a regular basis along with the octopus plant. Did I mention the anubias? Sure I left something out, if not that. Yes! a small remnant of Anarcharis from the forest I put in for more rapidly cycling the tank transfer. It grows fast and big with CO2! Too fast, hence the scissored near genocide (herbicide?) of the Anarcharis stand. And there is a pothos houseplant in the back right corner, which I am trying to train around the light rim, that has roots coming into the tank.

Almost Dutch-style, except for a piece of wood I carted over from the nano that had hygrophila and java ferns attached. Rounded out are heavily harvested frogbit, water lettuce, and red floaters. The floaters block too much light, but I've found the long spiral val leaves are great for keeping it in a corner, as long as you ruthlessly throw out a lot of floaters.

I add Seachem Nitrogen and Potassium with each water change (40% weekly), a dab of Iron occasionally for the red plants, and then alternate with low doses of Flourish and Trace (once each a week). I place Flourish root tabs in the Fluval Stratum substrate, concentrated on the back heavy root feeders.

Next tank / upgrade for the larger plants I will definitely add a gravel layer under the Stratum, which is perhaps a bit too thick, but roots are already showing at the bottom of the tank.
Last edited: Oct 14, 2022

Congrats to @Herbibore with your stunning nicely planted 29 gallon tank. Well deserved win!
Coming in 2nd place is @Rocky998 with his well designed 20 gallon high Peacock Grudgeon tank. Great job!
And coming in third place is Fishmanic with his 29 gallon Tiger Barb tank. Congrats Fishmanic!
(Fishmanic gives himself a pat on the back)

Thanks to all who participated and/or voted in this month's TOTM contest.

Right now we are accepting entries for our October Fish of the Month contest. For October, we are featuring all Catfish except Plecos. If you have a Catfish, we hope to see you entering the contest. The link to the entry thread is below:

POLL IS NOW CLOSED! Catfish :big_boss: PLEASE VOTE! We have 10 awesome Catfish entered into October 2022 Fish of the Month Contest. View all the entries and descriptions below and then go to the top of page - click on your choice for FOTM and then click the "cast" button. You are not...
www.fishforums.net
Last edited: Oct 14, 2022
F

(Just wanted to use a lot of emojis lol)

The picture doesn't really capture the whole setup, as I garden it to see from a distance, too, so here's a different pic. Glad to answer questions about it!

@Herbibore
feel free to post more pics of your tank on this thread.
You will soon receive a Winner Banner in your profile area and your tank will be added to our TOTM WALL OF FAME

Congratulations! A well deserved win! I especially love the pinnatifida, I had some and loved it, but it kept getting knocked from the piece of wood I attached it to (okay, I kept knocking it myself during water changes, and the cories finished it off), but I plan to get more again, because it's a wonderful plant, and even better in a tank like yours with CO2!

AdoraBelle Dearheart said:
Congratulations! A well deserved win! I especially love the pinnatifida, I had some and loved it, but it kept getting knocked from the piece of wood I attached it to (okay, I kept knocking it myself during water changes, and the cories finished it off), but I plan to get more again, because it's a wonderful plant, and even better in a tank like yours with CO2!
Click to expand...

Thanks! Back in my nano tank when I started that plant, they were all planted in the Stratum, but quickly got too big, and I had to cut them back. One sent out a runner that I placed between two "branches" of the wood piece, and over time not only rooted itself to
the wood, but sent out a runner that added two more that rooted themselves. Took time, though.

Btw, my "tissue cultures" all came from those dubious packets you find in the major pet chain stores (and some from the tubes). Easy to sniff at, but aside from the major chain stores, the one LFS here has only the more popular species. I obtained a few
from Buce Plants (I guess I can mention them), including that hygrophila p. and the red floaters, but occasionally stop by a big chain store to see if anything new in those packets has come in (which is where I found the rotala h'ra that I planted only a couple
of days before that pic -- they really have filled out since!). My lighting is normally on 8 hours a day, but when I add a tissue culture, I bump it up to 12. Now that it has a good start, I'm on a ten-hour light schedule, going down to eight eventually (the shorter
days seem to sync with it, lol).

I'm also cutting back on the ferts; I'm already seeing my biggest algae problem in the past two years of being back in the hobby, which is staghorn algae. Iron seems to make it worse, too. Fortunately, it seems to prefer the long, slender leaves in the path of
the water flow, so each water change I just tear off the affected leaves. That stuff is too tough to scrub off, and previously I would squirt some Excel on it, but I no longer use that product, for fear it might have side effects similar to Round-up.

Herbibore said:
I'm already seeing my biggest algae problem in the past two years of being back in the hobby, which is staghorn algae. Iron seems to make it worse, too. Fortunately, it seems to prefer the long, slender leaves in the path of
the water flow, so each water change I just tear off the affected leaves. That stuff is too tough to scrub off, and previously I would squirt some Excel on it, but I no longer use that product, for fear it might have side effects similar to Round-up.
Click to expand...

Urgh, staghorn sucks! Have you heard of the method using hydrogen peroxide? I haven't tried it myself, but sounds like it might be pretty effective if done carefully, especially if it's slow growing plants that are affected.

The tank is gorgeous! The amount of work and love put into it is very clear.

I've heard of it, but doubt the kuhli loaches would respond well. 8 hours of light, regular pruning, and lower ferts is
the course for now (I'll post a more up-to-date pic in a day or two; today is water change / pruning day!).
Last edited: Oct 16, 2022
You must log in or register to reply here.