Maximum size: up to .6, but mine is significantly larger, about 1".

Care: This species of crab has a symbiotic relationship with certain anemone species. The crab carries the anemones in its claws. The anemone gains a great deal of mobility, while the crab gains some protection from the anemone's nematocysts and uses the anemone to harvest and sting food from the water column and substrate. This is not a crab for the large tank as it is preyed upon by a number of carnivorous species because of its small size. House with other small, peaceful inhabitants in a smaller aquarium (10g or less). Symbiotic anemone species include Bunodeopsis species and Triactis producta. It can, however, survive quite well in the home aquarium if it loses its anemones which frequently happens in transport. It has been known to pick up other anemones, including the pest aiptaisa, corals fragments, and sponges as substitutes for lost symbiotic anemones. Considered reclusive, this is a misconception. The pompom crab prefers a tank location where it feels secure on at least three sides. If such locations are provided in the front of the tank, the pompom crab will be easily visible throughout the day. In addition, dimmer light levels seemed to be preferred. Again, as I keep nonphotosynthetics, this seems to help the crab.

Feeding: Pompom crabs feed on detrius and small food particles that it picks off the water column by swinging its anemones in an undulating motion. They benefit from target feeding of meaty foods including mysis. Mine are kept in a non photosynthetic coral tank that is fed daily with cyclops ease and frozen mysis.

Sexing and breeding: The female crabs have a wider, more pronounced abdomen. Do not keep two male pompom crabs together, they will fight. Female/male and female/female combinations are acceptable. This picture isn't mine, but it shows the difference between the male and the female. Two males are on the left, the female is on the right... The females produce egg sacs in captivity, but the fry are extremely difficult to raise in the home aquaria. If provided with the correct environment, it can live for several years in captivity.

EDIT: I was waiting for this because it's very cool. Armand (my pompom crab) shed. Now I can sex him, by comparing a photo of his shed to the image above. 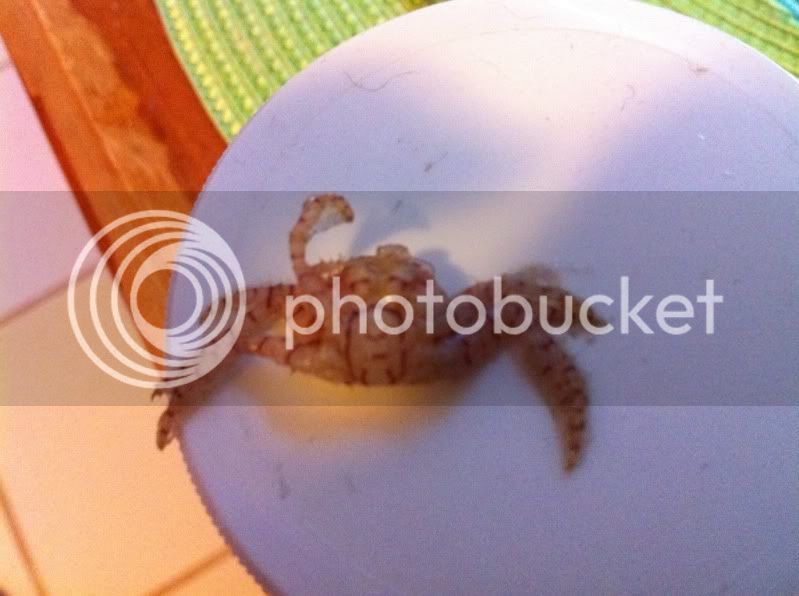 I'd say, judging by the photos above, that I was correct to name the crab Armand.

My pompom crab... Hard to say which species I have, they are very similar in appearence. He has the anemones he originally came with, they look like Bunodeopsis anemones to me. 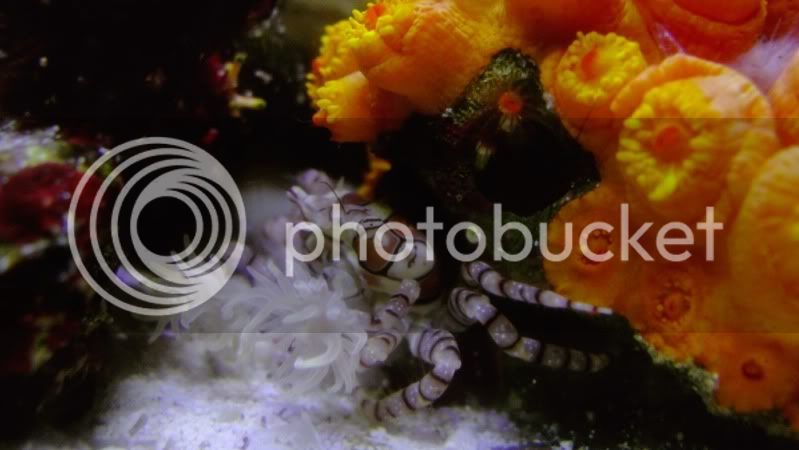 Hi there, does anyone have the male vs female pics posted here previously? They are no longer available and I'm trying to determine the sex of my pom pom crab.
S

They are amazing to watch

Can you help identify Floating green spots from plants?