I put my Platy fry in a breeder box. Today is the 7th day. I've 9. They seem ok, active and like to hang out a lot in the Salvinia I put in with them. I think they're about 8mm in length.

Should I release them now into the main tank? I don't have a second tank. I know I'll need to re-home some & I will get a bigger tank in next 6 months. 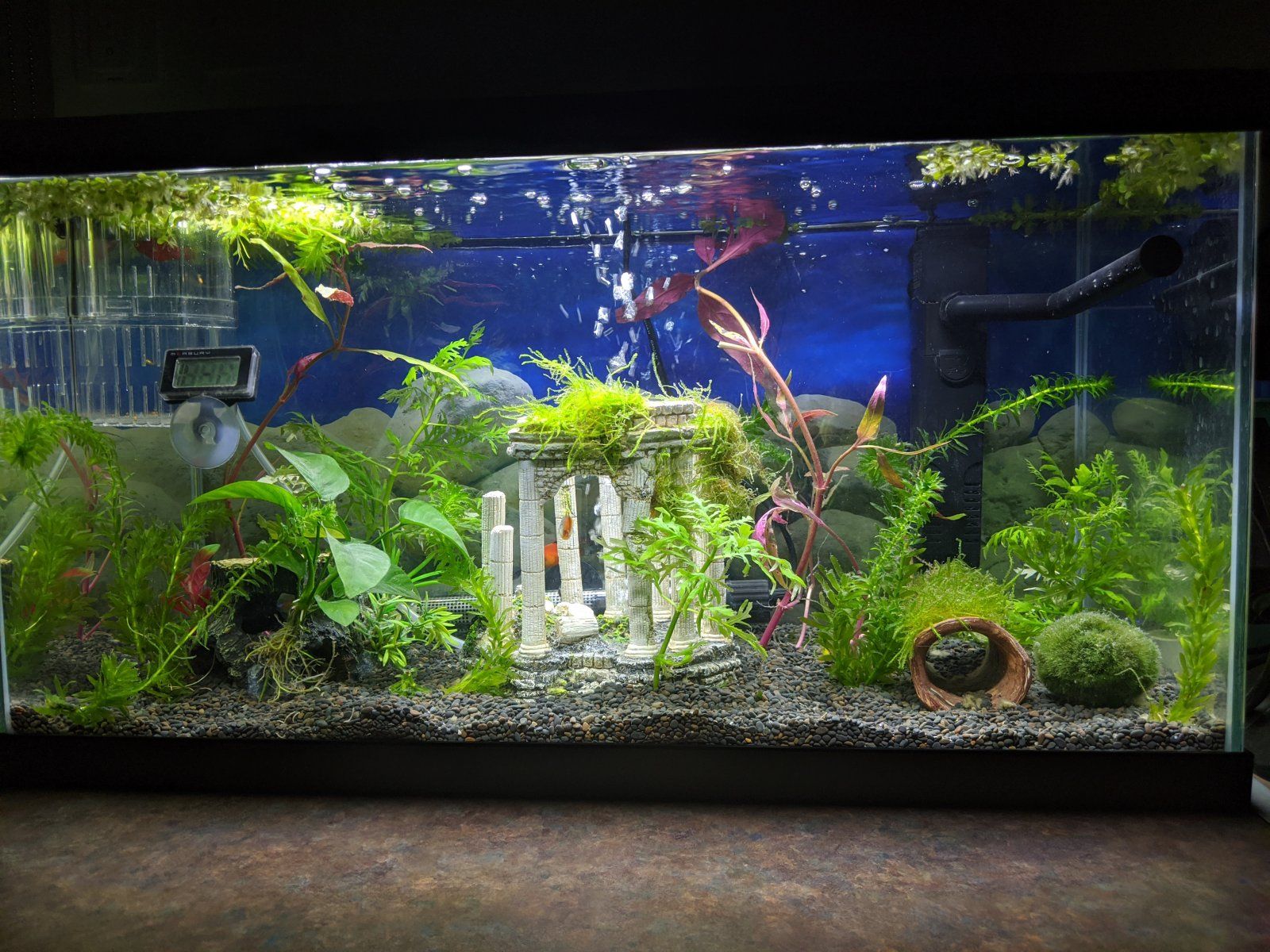 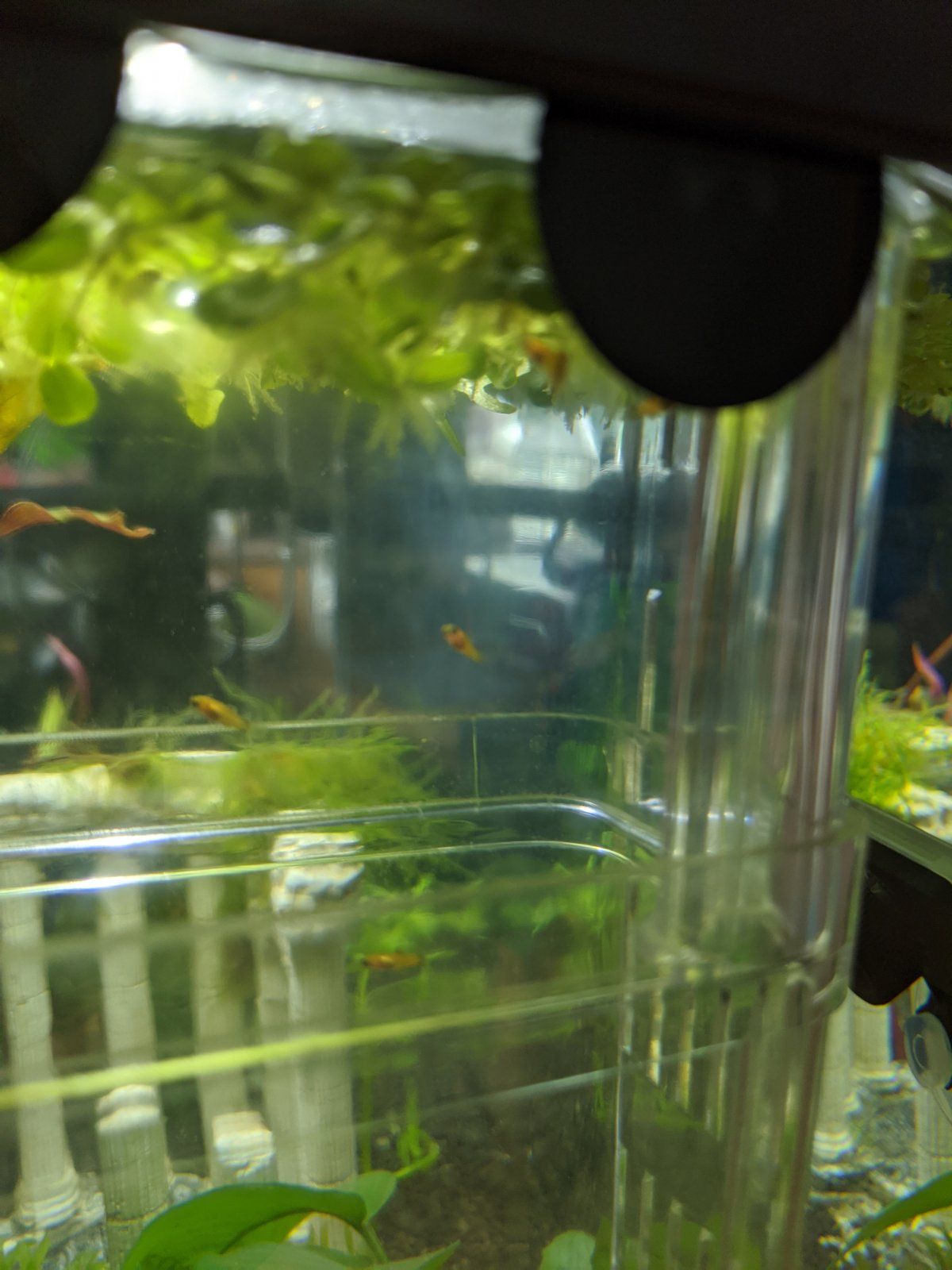 Hmm. It's up to you! Since there are only nine fry in there and they're still doing well, you could give them another week or so in the breeder box to put on more size and strength without worrying. I always suggest no more than a week or two for fry basically depending on numbers. It's not good to raise them in there for three months until they're old enough to be sold of course, and even after a week, if it's a large batch, it gets too overcrowded with so many babies. But you have a nice sized batch that would be fine for a second week, and will be larger and less likely to get eaten after another week in the safe zone. They really put on a good amount of growth and strength in that first couple of weeks.

But if you want to let them into the main tank now, you absolutely can. They're more likely to get eaten, but with the live plants and some scheduled feeding and tank maintenance, you can keep the adults well fed enough that they're usually not hungry enough to bother chasing down fry. I feed my colony tank with adults and fry 3-4 times a day when there are newborns. I just make sure it's tiny amounts, crushed up small for the fry too. It's enough to keep the adults lazy, without polluting the tank too much more, but does mean more frequent water changes. Most fry make it even though I never use a breeder box
OP

I'm treating ICH too but the higher temp seems fine for the fry.

AilyNC said:
I think if I can I'll keep them another week because there's so much going on in the tank with daily big water changes I'd probably keep sucking them up

I'm treating ICH too but the higher temp seems fine for the fry.
Click to expand...

Sounds like a good plan! They'll be fine in there for another week, no worries I can give you some tips for the safest way to let them out when the time comes if wanted, just let me know.
M

Well I bought a pair of platties from the LFS 8 months ago put them in a tank with a few guppies didnt give the fry any special treatment and now look !!

Iv just come home to see 6 platy fry. Mum always seemed pregnant in the main tank but never saw any fry so put her in with the glolights 2 days ago and now this ! Not too hopeful of the colours tho as dad is yellow / black and mum all black. If they make it I'll give them to lfs.

I kept 8 of my platy fry in a fry net for about 2 weeks and 5 were still in the tank when I reunite them in the tank they were the same size so keeping them in the net had no ill affects on them. I would wait until they are a little larger, maybe another week or two.
OP

MicktheFish said:
Well I bought a pair of platties from the LFS 8 months ago put them in a tank with a few guppies didnt give the fry any special treatment and now look !!View attachment 112832
Click to expand...

Oh wow. I reckon I'll be heading that way too
@Guppy10 they look so unusual

Adding to the tank

D
I cannot get ready of Ammonia in my tank-Help!