Of course when I say 20L, that's the water displacement after including live rock - the tank is ~40L empty.

I have had this tank for 12 months, it was built my my buddies at the LFS and they were good enough to fully cycle and stabilise the tank for me before I took it home. Here it is on the day I picked it up: 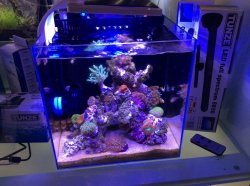 I also currently have a surface fan on this tank in summer!
Also in the tank is a large sock of mixed activated carbon and Phosguard, about a cup's worth mixed together.

A large quantity of liverock
Aragonite (i think) sand
2 x Trochus snails
A mix of other cleanup crew, bristle worms, a crab in there somewhere, lots of little critters

Tree coral
Quite a few zoas
Button corals
Originally a couple of clownfish, now a clownfish and a yellow clown goby.

I live in the country and when we have power outages, they pretty much last the whole day! So when we had our first power outage after my marine tank came home, I was quite distressed at how quickly the livestock started struggling.

Ultimately I sold the tank about 4 months after I brought it home because of the damage power outages were making. The last straw was when I lost a clownfish to an outage!

Fast forward to last week and my partner suggested getting a generator to supply power if it goes out. Why I never thought of that, I don't know, but I immediately messaged the person who bought the tank, and asked if they would be interested in selling it back? Happily, they agreed, and I went to pick it up

Unfortunately it seems low maintenance wasn't low enough for the seller and instead of weekly changes he had stretched it out to a month at a time. The livestock had died, there was a decaying snail and the corals were dying as well.

So now it's about the rehab
F

Glad you got it back, now to return it to its former glory

This is a good comeback story for that tank

Hope you will keep posting progress as it happens.
OP

So here is the tank, freshly home and reinstalled in all it's somewhat horrifying glory 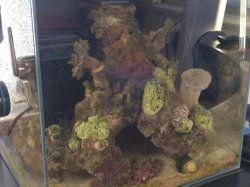 It came home with month old seawater in the tank, both clownfish had died and there was a dead and decaying snail in the bottom I fished out and disposed of. The rock was full of algae. I refilled with the old seawater to minimise shock to the already stressed coral for the first day as it settled in.

I had already been to the fish shop the day before so I immediately added a surface fan. the temps were getting to 40 degrees C, 34 in the house, and the tank was meant to be ideally between 24 and 26 C. Running the fan on low over about 10 hours, kept it at a pretty reasonable 27 degrees without a chiller

The tree coral has overrun one of the few zoa colonies still live, so I removed that coral portion from the tank and rather firmly removed the tree coral from the zoa frag plug. A clean snip and some glue and it was back on its own frag plug. I also removed some dead coral frag plugs. The original glue has come loose so I will have to reglue quite a bit of material but that can wait for when I acquire some more zoas. Three of the original colonies have no active polyps and really have died off, but I think with a few months they will come back.

The next day I did a 40% water change with the seawater I had brought back with me from the seller. I went back up to the lfs and picked up some carbon and phosguard (who knows when it was changed last! The phosguard was yellow not white, and there was sediment in the sock!), a replacement snail, a nice button coral, a couple of clownfish and a yellow clown goby.

Another 40% change, fresh carbon and phosguard and things were starting to look up... 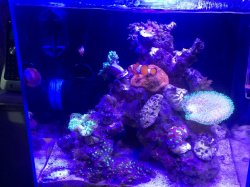 So I've had this back for about a week and there are definitely some problems!

The skimmer foamed like crazy for a couple of days. The fish almost immediately showed a little cotton fungus, indicating some stress. I did two more 40% changes, one with the seawater provided and one with seawater from my lfs. I've elected not to treat the fungus, as I believe its a symptom of the tank not being quite right.

The yellow clown goby proved to be extremely finicky and I lost the smaller of the clownfish the next day. Alarming! The remaining clownfish ate well. 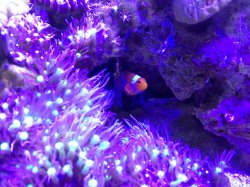 In between this routine, I added coral food and certainly the coral seems to be very happy indeed! The zoas are opening, tongue coral is happy 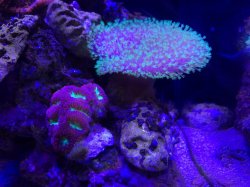 and the frogspawn seems to be recovering from its near death experience. You can see the 'skeleton' from its former size. 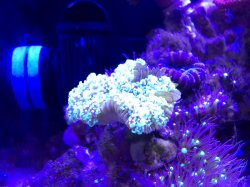 The tree coral is still closed but starting to expand its trunk. Sadly some of the zoa colonies are well and truly gone, but a couple have one or two polyps still alive and I hope they will eventually recover into colonies again.
OP

It's been a mixed week!

The corals continue to improve <3 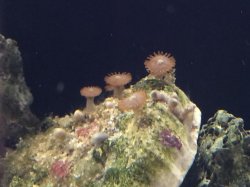 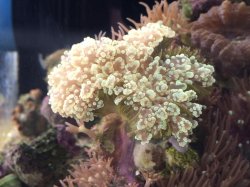 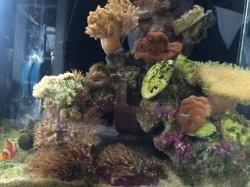 I did spot a hitchhiker, which will need to be dealt with at some stage. It's the fluffy looking thing - aiptasia. 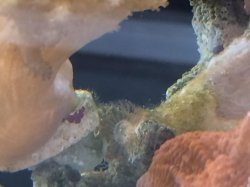 I lost the second clownfish, who displayed signs of crypt before perishing

At this stage I knew something was up, because the water was very clean. I decided to kill two birds with one stone - remove the rock, reglue the loose frags and clean the sand bed, which I suspected must be the culprit.

I also picked up a new addition for the tank - a psychedelic mandarin. These fish have a reputation for being difficult to wean onto frozen foods, so I have set up a live BBS feeding station. I also picked one out at the LFS that looked healthy, appeared to show good feeding drive and a reasonably good looking tummy. A second one that would have been more desirable as he was smaller unfortunately looked too far gone to attempt to wean onto BBS/frozen. His belly was tucked up to his spine. Poor thing The shrimp eggs are doing their thing in a small betta container hung on the side of the tank, and should be ready to go into the feeder tomorrow afternoon.

I didn't take photos unfortunately, so you'll have to take my word for it that stirring up the sand bed once the rock was removed produced the most disgusting brown water you've seen. It was foul. Right now the tank is settling back down after a 90% water change

The fresh phosguard and carbon are probably working hard with the combo of superglue, water change and new slimy fishie!

Everything is looking positive and I'm hoping that thoroughly cleaning the sand bed should be the last big issue. 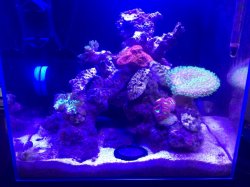 Things still to do - make sure the dragonet is well weaned onto the BBS feeder, check the glued frags are secure, and I need to reseat the tree coral which has gone for a bit of a walk off its plug.
OP

My body count continues - lost the mandarin today. He/she was eating well from the feeding station and grazing well on frozen BBS. However came home today to a very dead fish.

This is extremely frustrating to say the least.

Everything has been thoroughly cleaned. The water is 100% ok, and the corals have settled well after their heavy gluing session. I still get a little too much daylight sun onto the tank but the little algae there is isn't on the increase fortunately. I was having problems with temperature fluctuation especially as it starts to get colder at night, and the 50W heater is doing the trick. Still a little low so I have turned it up another couple of degrees.

I'll reload the carbon and nitrazorb at the end of the month.

I have a power outage all day tomorrow, so my partner is bringing a generator up this evening to hook up the heater, pump and skimmer.
OP

Update: The generator did what it needed to do and the tank was happy when I came home

Stirring up the (filthy) sand on the bottom must have loosened more organics than I expected, with algae rising quickly in the tank over the past week. I've just replaced the carbon and nitrazorb and will be heading up to the LFS for some more fresh seawater to do another water change. The tank is getting too much sunlight as well, and I'll need to move it to another place soon.

All the corals and snails/inverts look happy regardless, although the acan in the front suddenly retracted a few days ago and has not come back out again.

I would love something like that but too chicken to try.
OP

I'm lucky to have a great LFS; picked up fresh seawater and some new zoas for the tank to replace the two colonies that are gone. They agreed that it was likely stirring up the sand after so long may have contributed to the fish issues, although they did point out the corals were unaffected, so it might have just been bad luck. They also replaced my LED light fitting as a strip of whites failed. 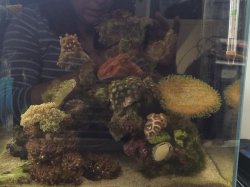 I also replaced the carbon and phoszorb. My plan is to use a smaller quantity in the sock but change more frequently.
The temperature seems to have settled at a more stable 25 degrees, thanks to a larger heater.
Algae is still problematic but seems to be slowing.
The acan is still retracted but showed improvement a few days after the water change.
The tree coral has been re-secured and recovering nicely in a sunny spot.

The coral that is on the right has been identified: a sarcophyton coral, or leather type of toadstool. It is getting a little too big, and as it turns out these can grow to football size!

A little research into fragging and I can do so by cutting off the rim completely and cutting the rim piece into parts that will grow into new corals. As it turns out, it always pays to do your research; this cutting will release a heap of poison into the water. They recommend doing it outside the tank, but is grown onto the rock so I will look at doing the cut in-tank and then 'rinsing' with a full water change. I'll leave it for now.

Comparison shot of my tank when it was first picked up, and now, after a month's TLC: 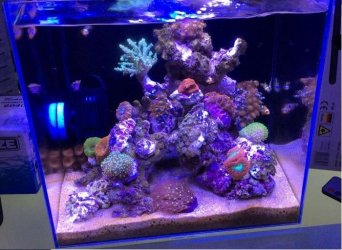 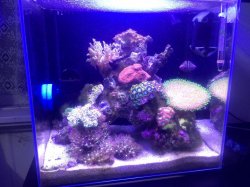 Are you going to get a nemo fish? ( clownfish )
OP

I will next month; I'm going to concentrate on getting the tank 100% first. I would hate to lose any more fish!
You must log in or register to reply here.

C
Potential fin rot? Even if the parameters seem fine?