Just out of curiosity i wanted to see how many people have thought about having a very large custom aquarium built compared to how many have actually done it, and how much money people are prepared to spend on buying a tank without winning the lottery or having a rich relative leave them a fortune.

Swim with the Fishes

We have probably all thought of it at one time or another. I definitely don't have the room for one although I have thought of inclosing the patio out back and putting a pond of 1000 to 2000 gallons in the middle of it. Based on current finances, I couldn't spend as much as I know one would cost though. Still a dream for when those 6 lucky numbers come up. Another drawing tonight.

Practically perfect in every way

daydreamed about it like just about everyone, not got the space where we are now, but we have agreed in the new house instead of havng lots of little tanks we'll just have a couple and we've agreed (to the maximum extent possible and realistic) to just say sod the budget, we know it's pricey but we want it. main plan is a great big reef tank with just about every gadget going

The simple fact that I'm still living with my parents means I can't have any more tanks. I am lucky with the fish I have currently and the space my parents allow me.

I have and done it lol.
T

The ultimate tank is one that you can snorkel in with your fish!!
OP 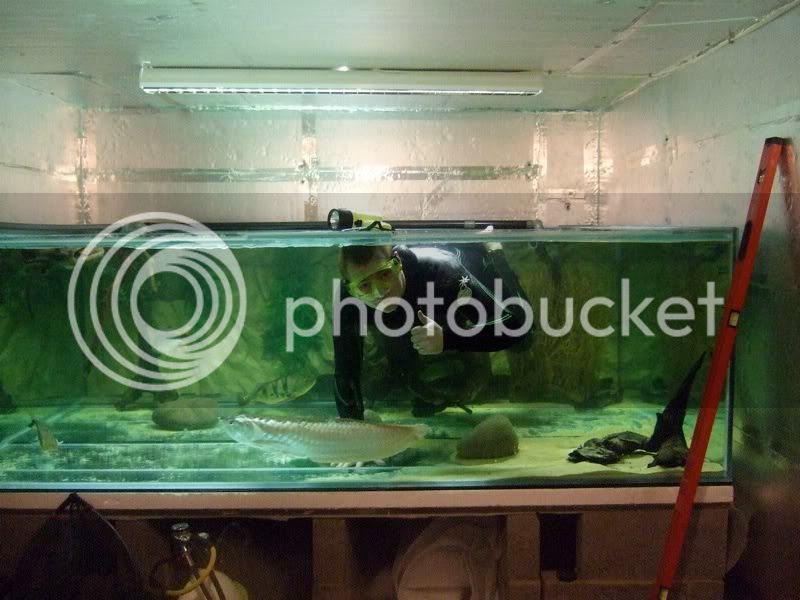 I'm planning to move to Wyoming in either August or September, and once I get settled in I plan to have a custom tank built. I'm going to aim for 300-500 gallons, I want it as short as is safe to maximize the length and width for mbuna. Final size will depend on the space available.


Edit: Nice videos CFC (and Andy of course), your aro doesn't look too pleased with the intrusion though.

So who have voted on here with custom tanks over 200g as its says 5 and there is only 5 people on here that I can think of with tanks that size and 3 of them have not voted. Also who would spend over £10,000 come on take it seriously.

mark7616 said:
So who have voted on here with custom tanks over 200g as its says 5 and there is only 5 people on here that I can think of with tanks that size and 3 of them have not voted. Also who would spend over £10,000 come on take it seriously.
Click to expand...

I voted yes because if I didn't find my 270 gal second hand I would of got a custom one built, infact I was going to order it just before.
I think you should relax.Whats the big deal?The polls not exactly fool proof, none are.
T

Would love one, but:

oh well. I'd probably just fill it with rams, gouramis and other small fish anyway

Urm, RE 'how much are you willing to spend on a tank' etc... Can I have a 'under a tenner' option?

Would love one, and would already have one if it wasn't for the damned stairs going up to the flat. And if I have to move CFC's 200 gallon once more I may well throw it in my car and bring it home with me and decide how to get it up the stairs when I get here

There is little doubt that I will have a shark and ray tank built once I move. Can't resist a couple of blue spotted rays and coral cat sharks.

I put £3k to £5k as an amount, but to be honest, I would probably end up with more. As I have gone for top end equipment I dread to think how much the reef system has cost me thus far. Unless I DIY it, the cost of a skimmer for the sort of tank I would build would be serious money, let alone the tank, the sand, the salt, the Live Rock, inhabitants...

Suddenly I wonder whether I should have put 10k afterwards. I wouldn't aim for it, but the costs always seem to add up.
K

shroob said:
The simple fact that I'm still living with my parents means I can't have any more tanks. I am lucky with the fish I have currently and the space my parents allow me.
Click to expand...

K
Help! What is up with my Betta?

L
What’s wrong with my fish?