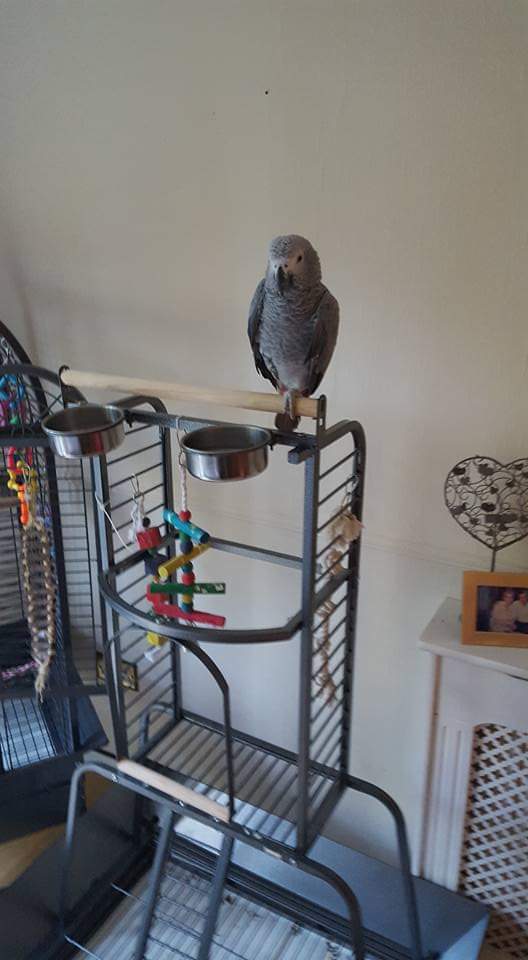 This is Our 3 year old African Grey "Rosie"

I grew up with birds with my Dad having budgies (we have 2 budgies also), cockatiels, love birds and lastly an African grey call Jacko.

My wife fell in love with Jacko and wanted a parrot for years so i brought Rosie for her. Shes a beautiful little bird but unfortuntely doesnt like my wife much lol

shes all me and follows me everywhere acting as my personal bodyguard. Rosie thinks i spend to much time with the fish now, shes started flying on top of my tank to try tell me shes No.1

Shes got competition tho with my other little mate (Lola) 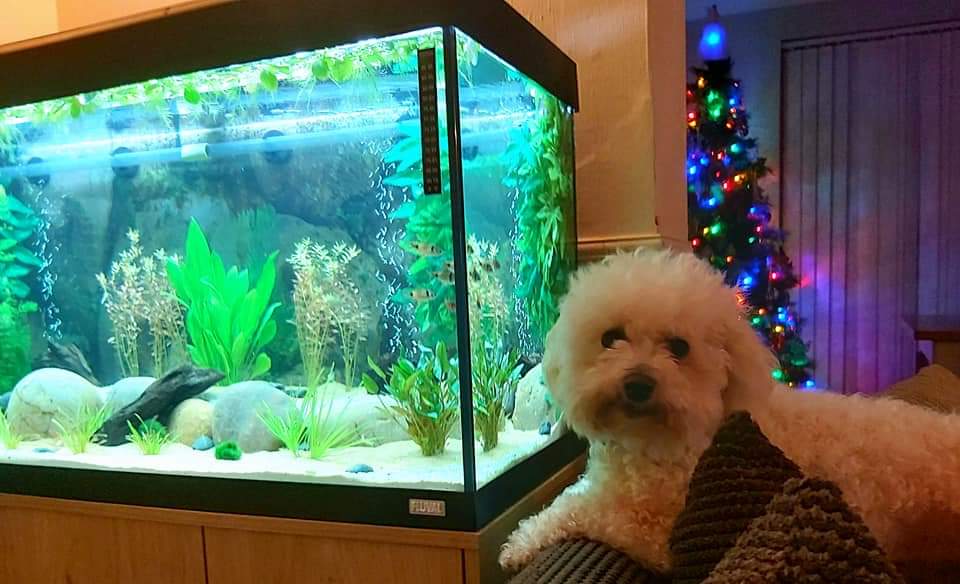 Oh she is a beauty,

my budgies and love birds stuck to me too. My wife at the time had very long hair so she didn't like them landing on her . My kids grew up with birds too.

Gorgeous! Always wanted an african grey. My dad was almost left one in a will but it ended up going to his cousin!!!

I lived with mine for 14 wonderful years and became too sick to continue to handle them. Greys need a minimum of 6-8 hours a day of out of cage time and few people can accommodate that, they also need to be supervised nearly that entire time unless you're ready to switch out the woodwork or even sheetrock in your house. He had the dining room table where he would take boxes and "remodel them" - he could go through 2-3 a day. Then you get to clean up the mess so you can get dinner on the table and he screams when put back in his cage. Lola had a plate at the dinner table where he would eat whatever we were having. Sometimes he sampled from other people's plates. Mornings were spent in food preparation of different fruit and vegetables. He was still unhappy. With my illness I was getting too tired to chase him all over the house. He was depressed as well and this became a game to him. Birds can be very loving but they are more like little clowns than compassionate souls like dogs and cats. He would try and control them "Go lay down", "Stop your whining" "GD cat get out of here" I'd get attacked when on the phone and he would copy what he heard me say "Yeah, uhhuh, ok, maybe tomorrow, talk to you later". They are very dusty birds so they need frequent showers - as parrots go, this species seems to hate water so you have battle to take a shower with you (watch any exposed parts). It sounds lie fun because they make jokes and they are so totally bonded to you but it's not healthy for either of you. We spent a fortune on a custom made backpack so he could go on hikes with us - but then I got to sick for that. I eventually talked to the Tallgrass Parrot Sanctuary in Kansas and they suggested he might be happier being around more activity - that his vitamin D levels were probably too low from lack of sunshine, his diet deplorable because I'd let him have McRibs and Cookies and Fried Chicken. I keep taking rehab hoping to build up strength so I can get him back but he loves it out there - they are vegans but they care for a woman with special needs who is not a vegetarian and he is allowed to eat off her plate as well as eat more fruits and veggies. He doesn't talk much anymore but associates more with other parrots. I got the aquariums thinking they would be easier to care for but keep me from just staying in bed all day and giving up. It worked for a long while. I have great arm muscles now but they are still deteriorating faster that I can get the strength back. I'm already think of assisted living and have had to hire somebody to help me clean the aquariums because my stamina isn't enough to clean them all the time any more. It's going to cost a fortune but they will have a healthy environment, no more pets - thankfully the cat is easy,

So as fun as it looks, caring for exotic pets is a whole other ballgame most are not more than one or two generations from being wild birds. My bird had an African mother (wild caught) and an American father. Most get neglected or ignored after a while because it's so much work - while they are intelligent beings - it's just so unfair. It's bad enough neglecting our fish friends by not providing an appropriate diet or clean tank but to ignore natures more intelligent creatures is just sinful. They become our resented unwanted prisoners through no fault of their own. They try to get your attention and love back and do it the wrong way so sad. They start pulling their own feathers out or performing other self destructive behaviors. They give up, stop eating and die from lack of care. But how many people have 6-8 hours a day to care for just 1 bird everyday - without vacations or anything. Everything they do in life revolves around that bird.

parakeets sound so much easier...especially if you get two so they have company....and they don't usuallly outlive you
OP
OP

Parakeets are lovely little birds but African Greys are just special and are worth every bit of time and care you put into bring them up.

Their intelligent, loving and playful birds who chose you to be their sole mate which creates a very strong bond. (my wife just wishes that was her ) Rosie is incredible company to the family and if you do have the time and dedication as all animals/pets should have their about the best birds you can have.

Were lucky in the fact shes out most the day, my mother-inlaw pet sits while were at work so both keep each other company and she will just play on her stand with her toys. Thats until im in the room, then shes straight across to the sofa for a fuss

maybe the answer is to get two african greys so they have company and can talk to each other . Then you don't have to spend as much time with them.

Exotic pets are a lot of work. I have had numerous different species and even though it was difficult its definitely worth the effort. My grandpa had a cockatiel named Danny boy and he was great. Having a parrot is like having a toddler in your house for 80+ years lol

We had tame parrots (2 male weeros/ cockatiels) when I was younger. Eventually we put them in an aviary with a couple of females and they lived happily ever after. They bred and the males looked after the eggs and young. The males also came to greet us each day when we went outside, and they would sit on our shoulders when we were in the aviary. They didn't lose any of their tameness (not a word but suits what I am trying to say), and they got an extended family.
OP
OP

Tbh i dont find Rosie hard work at all. Shes cleaned out once a week, feed and watered every morning. Shes just as easy to look after as any other pet.

As long as they get interaction through out the day they are fine. But thats no different to having a cat or a dog. No point having pets if you leave them to themselves.

Russjw said:
Tbh i dont find Rosie hard work at all. Shes cleaned out once a week, feed and watered every morning. Shes just as easy to look after as any other pet.

As long as they get interaction through out the day they are fine. But thats no different to having a cat or a dog. No point having pets if you leave them to themselves.
Click to expand...

I agree. It really bugs me when people get pets and interact with them for the first few weeks and then ignore them. They are a commitment.

JuiceBox52 said:
I agree. It really bugs me when people get pets and interact with them for the first few weeks and then ignore them. They are a commitment.
Click to expand...

We spent years trying to get the government to ban the sale of puppies and kittens under 16 weeks of age. We wanted people to buy/ get pets because they wanted a pet, not because it was "oh, a cute little puppy".

We would have preferred to sell people young dogs so they didn't have the cuteness factor. Then people would buy the dog because they wanted a dog, not because it was cute. The same thing with cats. Alas, the government doesn't care and we had 4-6 week old puppies and kittens dumped on our doorstep at least once a week.​

maybe play music for him or tropical sounds from youtube. Or leave the tv on for him.

Be sure to enter one of your pets in our Pet of the Month contest...next one starts mid March. Our fish of the month contest starts mid February.

Nice Bijon Frise, Russjw!
You must log in or register to reply here.

J
Guppy looks like is "dragging" his (not large) tail.

Another shot at a pond