About a year ago, I got some bad advice from a LFS (go figure).
And I left with three little Otocinclus for my too small tank ...Fluval Edge 6 Gallon (fully cycled and running for well over a year).

After coming here and learning about how they're caught and mostly starving by the time they reach the local fish shops...and the rough way they netted them (omg I almost had a panic attack watching it).
I realized how fragile and difficult they are to keep well.

Knowing my tank doesn't have much algae (except what's on the main anubias leaves that are way up top and get too much light). I knew I'd have to supplement.
They didn't care for algae wafters but my endlers would gorge themselves on them and get bloated.

I started giving veggies, and it worked. They were very happy eating and resting on the weekly veggies.

I did lose one after about a month.

So that left me with two (but I knew I didn't have the room for more).
I also had/have a few male endlers and a sunkist shrimp, an amano shrimp and a nerite snail.

Yesterday I came home and one was dead
Water is same as listed above. Does not fluctuate.

Here's my question:
My poor lone Oto seems out of sorts. He's pacing and glass surfing.
I know they need a group. But I don't want to add anymore because I don't believe I have enough algae and maybe the veggies weren't enough to sustain them.
I also do not want to purchase more because of the way they're caught and how fragile they are.
Plus I just don't have the room to have the numbers they deserve to have.
I don't want to return to the store that sold them to me because ...well I don't want to further torture this little fish, plus I know I'll do everything I can to keep him as safe and fed as possible.
Oh and I do not know anyone around that has them that could add him to a group.

Any advice on how to soothe my poor lone little Oto?

I really have no clue how to sooth the last survivor Keep feeding those veges when needed though it helps, make sure they are blanched though (cooked) so they are soft. I really don't know what the problem was with your other otos by what you where saying, any symptoms? they usually live six to ten years.
OP
OP

DutchMuch said:
I really have no clue how to sooth the last survivor Keep feeding those veges when needed though it helps, make sure they are blanched though (cooked) so they are soft. I really don't know what the problem was with your other otos by what you where saying, any symptoms? they usually live six to ten years.
Click to expand...

Yes, I always blanch so they're nice and soft...I also drag a knife across the top a bunch of times for their soft little mouths. They seem to love it.

I believe the first one died just because of the way he was caught and starved by the time I'd gotten him...I don't think they have a fair shot in life with the way they're acquired (never would have purchased had I known).

This one that passed yesterday, just seemed to have ....died.
No signs and or symptoms which make me think he just didn't have enough to eat?!

It wont be that, if you are providing edible food to them that they actually enjoy its not starvation. Its stress it seems like, I recommend ordering otos online from researched (on) websites that you personally find suitable, LFS's sometimes don't provide care or quality.
OP
OP

DutchMuch said:
It wont be that, if you are providing edible food to them that they actually enjoy its not starvation. Its stress it seems like, I recommend ordering otos online from researched (on) websites that you personally find suitable, LFS's sometimes don't provide care or quality.
Click to expand...

Awww, I'm so sad. My poor little fish.
So...if I do order on line...how many should I get.
I currently have 3 endlers, 1 sunkist shrimp, 1 amano shrimp and 1 nerite snail (and my sad oto).
I am heavily planted and I religiously do 50% water changes every Monday.
Keep in mind, 6 gallon tank!
And doesn't really have any algae...
so would it just be wrong to get more?

Many people think Oto's can go into small tanks under 10 gallons, when really you need about a 15 gallon tank to provide a thriving home for them. I recommend you get some Cherry Or Amano Shrimp. you can get however many of those you want but I personally recommend six plus of each, might cost a dollar and a dime but its worth it in the long run.

Oh no! Poor little oto! I wish I could help. Good luck!

Sent from my SM-G900I using Tapatalk

I would leave the last survivor where it is. Given the tank size and other fish, you do not want more of them.

I have had this happen a couple times. Right now I have one remaining Zebra Oto from the initial three (and two common otos) acquired 4 years back. My single Zebra Oto is very active rasping plant leaves all day long.

A few years back, I was down to three otos in my 90 gallon tank. I rarely saw them because of the thick plants. One day, I counted five, with two slightly smaller than the other three. Obviously two of the original three had spawned. Point is, that if they diminish to fewer numbers than are ideal, they may well manage very well.

After I put shrimp in the 10 I was worried about Otto having enough so I put him in the 29.


"They can also be a challenge to keep alive. In part, this is because of some specific dietary needs; in part, because of the way they are caught in the wild and handled afterwards; in part, because some, if not all, will be infested with various parasites, common to many wild caught fish. At this time, virtually all Otos are wild caught, not farmed. At least a deworming program is a good idea, before you put them into a tank with anything else."


This is also very true, no tank needs any algae eater if properly balanced:


"One point I’d like to make is that most tanks do not need ‘algae eater’ fish. Pet shops often seem to advise having such a fish but the need really doesn’t exist. The main causes of green algae growth are excess amounts of light or food resources. Diatoms, {aka brown algae}, are common in new tanks as well as in the presence of high silicate levels. Diatoms tend to be self limiting, as the silicates get used up. But algae growth can usually be remedied by adjusting light or food availability. Personally, I’ve always found that snails make the best algae eaters if you really need some, with the plus that snails are omnivores that eat almost anything else they can find."
OP
OP

I feel so bad, hopefully he'll be ok.


Byron said:
I would leave the last survivor where it is. Given the tank size and other fish, you do not want more of them.
Click to expand...

This is what I thought I should do but just wanted opinions.

I'm really happy to hear this!


Byron said:
Point is, that if they diminish to fewer numbers than are ideal, they may well manage very well.
Click to expand...

I really hope that he manages, I very much adore him. They're such charming little fish!!

Good to know, thanks!

I did, when I acquired.


DutchMuch said:
Btw just found this if anyone is interested!
http

This article is AMAZING!!!! Thank you soo much for posting!
I knew a few points made in the article but there is so much that I don't think many (if not most) know!
We should really post this on a main page so people are made aware!
Especially now in the days of Nano tanks being so popular a lot of people (like me) are told they need these when in fact they do NOT!!
This is such a well written and important article!!!!
Thanks so much for finding and sharing!
OP
OP

My lone Oto seems to have calmed down a little since the death of his only friend. He's been hanging around with the sunkist shrimp. They both love the zucchini and have been nibbling at it since I put it there. 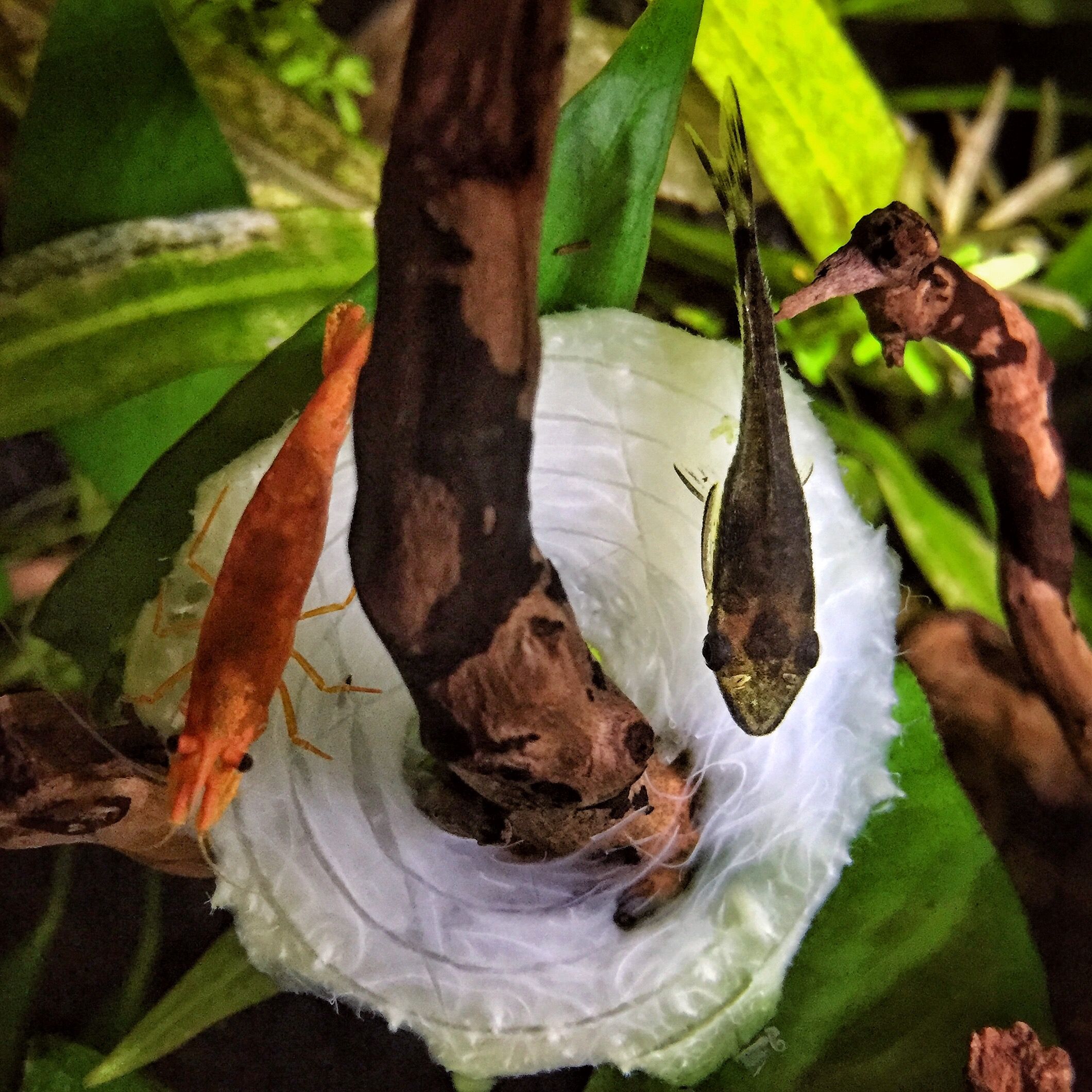 Cool
You must log in or register to reply here.

P
Does changing the arrangement of plants/rocks/etc. in a tank cause stress on your fish?

O
What do I feed my dwarf pike cichlid

M
How to check calcium in freshwater tanks