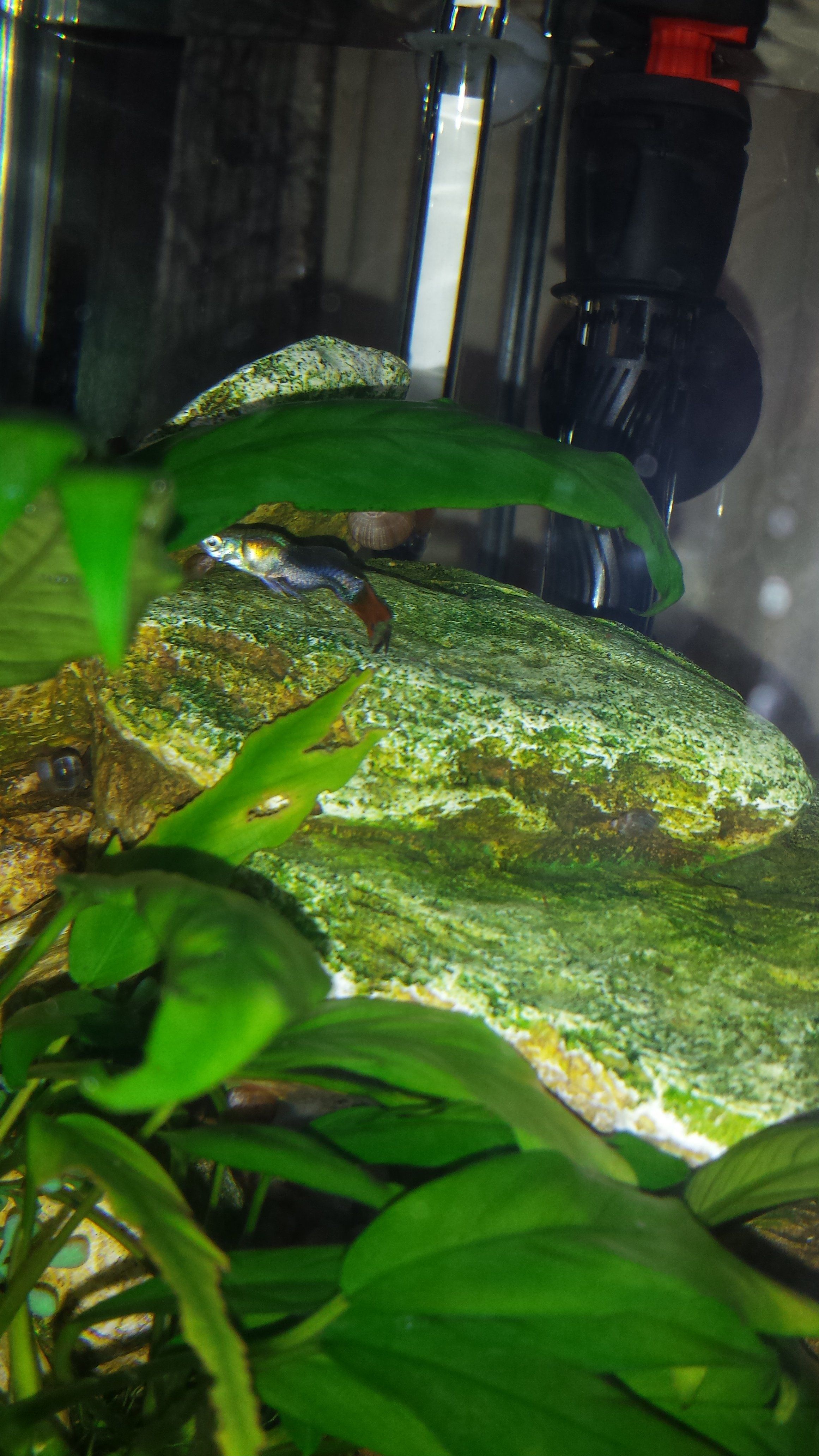 Over the past month, my old guppy Max has been constantly sick. Last week he had parasites, which I took care of and he recovered from. Today, however, I woke up to half of his tail missing. After looking closer, I found out that the tip is black and between the black and the orange (normal coloring), there is a clear part-- Thus why I thought it was missing. Included is a picture. He is certainly paler than usual, and he wasn't too enthusiastic about eating this morning. You can sort of see the issue here. I'm thinking this is fin rot, but it's different from the other cases I've seen. I'm going to try Melafix, if I don't get any responses saying otherwise.

Since he's been very sick lately, I'd appreciate if some of you would please watch this thread to see when I make another post, as I'd like to keep a thread open for whenever he gets sick. I have a feeling that his immune system isn't what it used to be, and this is why he keeps getting sick.

You all will be wanting the water parameters, so here they are:
Ammonia .023 (I got a very sensitive testing pad that stays in the tank, so now I know when there's just a tiny little bit. This would test as 0 with the test drops.)
Nitrite: 0
Nitrate: 0
Chlorine: 0
pH: 7.6
GH: ~400

His tank mates are all very peaceful and did not cause this. (4 harlequin rasboras, 2 cory cats, 1 very fat monkey loach, and 50 snails, about...) There are no plastic plants or sharp decorations which could have caused this, either. I vacuumed the water two days ago, but was very careful not to hit him with rocks or the vacuum.

The only thing I have added to the tank within a month is the new water (dechlorinated before I put it in) and the parasite medicine-- Which may have been the problem.

Thank you for any and all replies and suggestions!

...I actually would really appreciate it if a few of you really helpful people could follow this in case he gets sick again. Whenever he dies (which should be soon, as he's almost 2 years old), I'll let you know. I hope I don't have to end up euthanizing him, but if he's suffering and there's nothing I can do about it, I will do what I can to end his suffering in a safe and humane way (probably sticking him in the freezer with clove oil).

P. S. -- His bent spine is apparently a natural aging process, and is genetic because of inbreeding. This is not new and has gotten progressivly worse since I got him a year and a half ago. As far as I can tell, it causes him no pain and he can move just fine.

Right now, he's floating (right side up, so no swim bladder issues...) by my heater. The temperature is fine, but this is what my other guppy did for a month before he died. I have a very bad feeling that Max won't survive much longer... but I did say that nearly a year ago. He's my very first fish, and I've grown quite attached to him. Please do your best to help me save him.
Last edited: May 28, 2017
OP

He is dead. I found him against the filter intake, not breathing. Just in case, we put him in a bag in the freezer, but I'm 100% sure he's dead.

R.I.P. Max, Feb 2, 2016 -- May 28, 2017. You were my first fish, my first choice, and the last of your friends to die. You were always the healthy one, and always so quick to get to the food. You were always so cheery, and you fought through your genetic disorder to the very end. Even on your last day, you rushed to the food, battling your harlequin friends for each flake. And you tried, one last valiant time, to get those pellets. I'll miss you, my first.

Aw, I'm sorry. He looked like he was very pretty in his better days.
Guppies are very weak these days which is a shame because they're so darn gorgeous!
He's swimming in a better place now.
Kudos to you for keeping such a healthy tank and knowing you're parameters so well.
I'm sure you gave him an awesome life!
You must log in or register to reply here.
Share:
Facebook Reddit Pinterest Tumblr WhatsApp Email Link

Cherry shrimp, how long can they stay in a bag...?