First arrivals tomorrow. I have 10 Red Rili shrimp and 3 Zebra Nerite snails arriving. Had to order online bacause LFS did have RCS but they were quite clearly feeder grade so fingers crossed.

Technically the shrimp don't fit the biotope but shrimp (for human consumption) are farmed in tha lake - they are just a bit big for a nano .

Hope to get some pics on the weekend.
OP

Loss of the Egeria Densa meant another change in design. Needs to grow now. Hard to believe but there are a couple of dozen Celestial Pearl Danios hiding in here now. 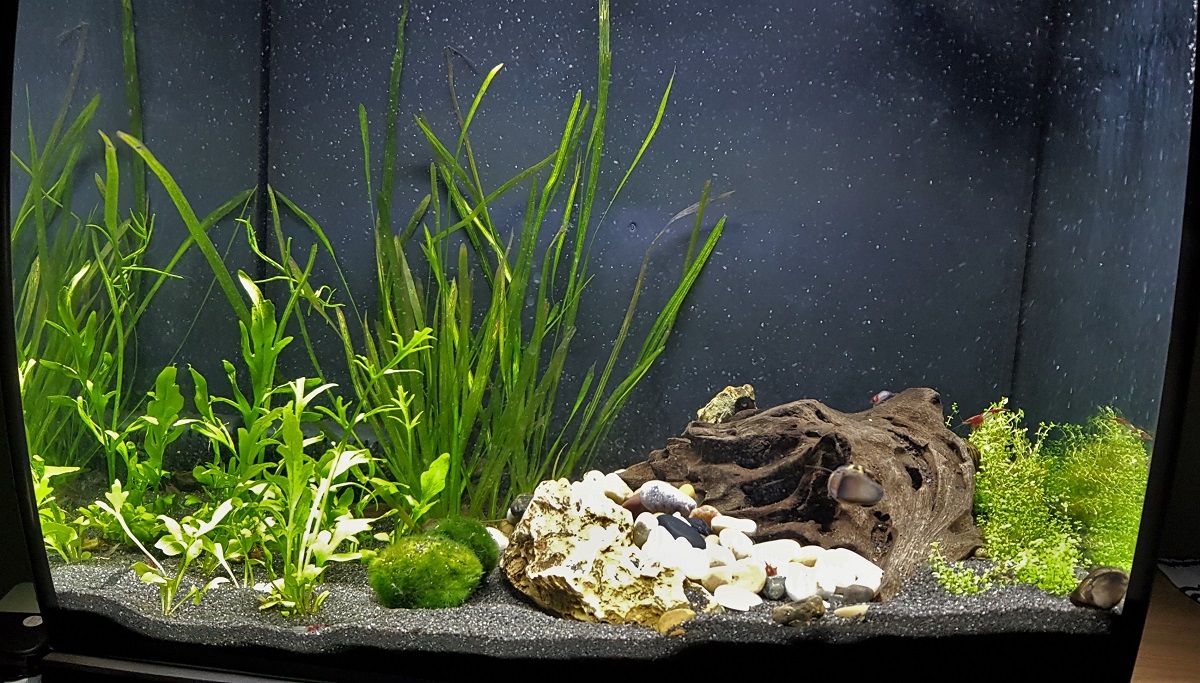 Well its a month since I first added water. 48 hours since my stock has been up to what I originally planned and so far so good. Ammonia and nitrites both at 0 this morning after last night's feed. I'll keep up with the daily tests for a few more days. No casualties that I'm aware of. I only counted 7 shrimp this morning but not stressing as there are planty of hiding places. I have found one moult so far.

Had to guess how much food to put in last night for the first feed since the CPD went in. They are still quite nervous and by no means voracious feeders. Unlike the tetra in the community tank who all crowd around when I wiggle my finger in the water - but they did have to learn that this means feeding time . Most of the CPD are at or near full size and a similar size to the shrimp.

I suspect I have picked up some MTS among the hitch-hikers. The ones I added were all dark brown but I now also have some that are very light with red/brown markings. They do look better against the dark substrate. The original ones I added do seem to have grown quite a lot and I may be picking out the larger ones as they have no predators in this tank.

No visible algae. Lights have been on 8 hours per day for around 10 days (which is when the plants went in). Plants are doing well for such a new setup so hopefully the balance is close to being right. I currenly have 3 zebra nerites but may re-home 1 or 2 to the community tank if I can confirm that they will be safe from the sids.
OP 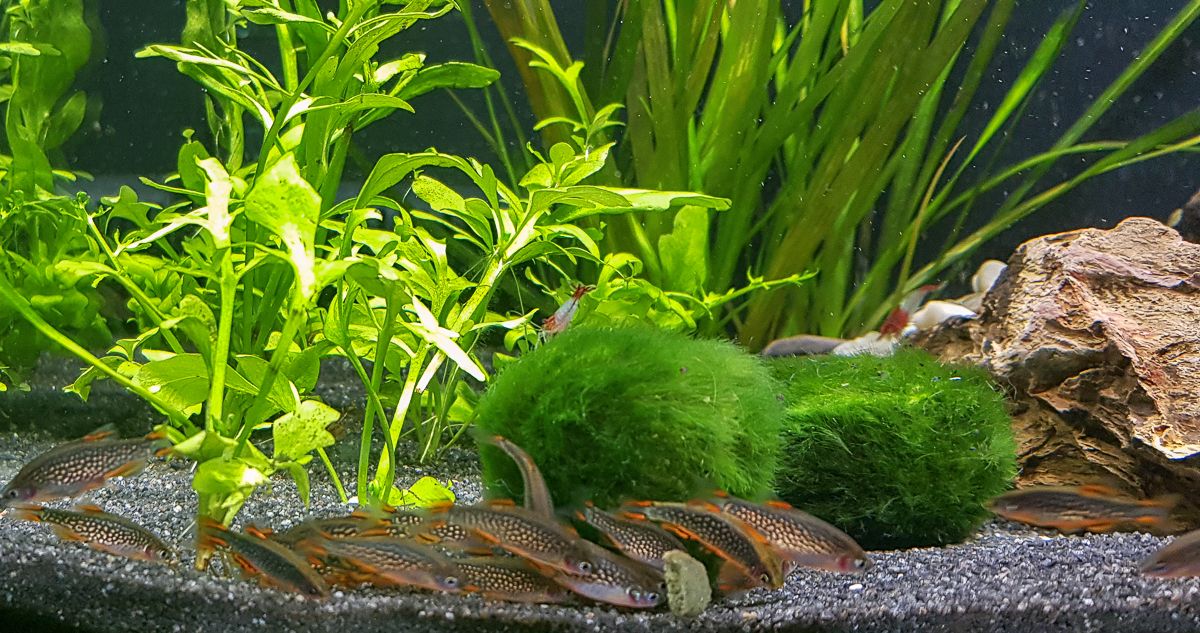 Tried for a few close ups tonight. Trickier than I thought - I'll have to break out the light stands and boxes for my next effort

Those are some healthy looking CPDs!
OP

Vals and water sprite are filling in nicely. The "baby tears" I bought online turned out to be duckweed. Not doing well as a carpet on the edge so I have given up retrieving them when they float upwards. Will rip the rest out tomorrow when I have some dwarf sags arriving.

I have lost 2 of the shrimp. I'm putting this down to natural attrition as a result of being shipped and re-homed as the rest are all doing well. I can never spot more than 7 so another is MIA or just good at hiding. To balance the books one of them is heavily berried. They started darkening yesterday but as these are my first shrimp I have no idea how far off they are, or even if they will do anything. Just in case I have removed the sponge I had used to block the top vents. The first back chamber is empty so if any shrimplets get sucked in they will be safe from predators. That's the other reason for letting the duckweed stay at the surface. The CPD never venture into the top half, not even for food.

I also lost a nerite. One of them was always falling off the side and onto its back. I used to have to turn him almost every time I went past the tank and one day I got there too late. The other two have never overturned and are fairly active.

CPD all well. Either they have grown noticeably or I have got used to their size. They are a lot less shy than initially, but I suspect they are never going to come rushing to the front to greet me - although they no longer dive for cover when I enter the room.

Sags are in - need a couple of weeks before they are worth a picture though . Have re-purposed the duckweed as a floating canopy enclosed in a loop of airline hose, so that should provide plenty of cover for the shrimplets. I have actually closed off the vents into the filter chamber because I noticed another berried female today and several more with very distinct saddles - so I am going to let nature take its course. I have given up shrimp counting because the water sprite and vals have really taken off over the last few days. I stopped being able to count the CPD ages ago.

If found the Nerite I had assumed lost (as in mislaid) alive and well in one of the filter chambers. He obviously likes it in there as he as spent the rest of the day trying to get back. Based on the "presents" he left in there he certainly won't starve.

Onto a completely different scale. The water table in my garden has finally receded to the point where I am able to resume water changes in the pond. So I have now started feeding the poor beggars. The grey ghost is one of the initial fish I stocked the pond with in 2004. I still have the other two from the "3 for a tenner" deal. He's a shade over 20 inches. The white one is a couple of years younger and around 17 inches.

Put the sponges back in to block the filter inlets again. All 4 girls are now berried so I suspect "not enough shrimp" is never going to be a problem.

Spotted the first new arrivals today. I have been watching closely for shrimplets because 2 of the girls stopped being berried earlier in the week. Have seen a few candidates lurking in the leaves but so far my eyes aren't good enough to positively ID them as shrimp . But then today...

At feeding time I noticed a (particularly small) air bubble floating in the wrong direction. A closer look and it wasn't floating at all - it was swimming. Then I saw another. Identical movements to the CPD, so I have at least 2 live CPD fry

. No chance of a pic - these guys make daphnia look like monsters.
OP

And after today's water change I saw my first shrimplets. I saw at least 3. Its marginal but they may just be too big to be seen as CPD food. The water sprite on the other side of the tank is pretty dense now so I expect there are a lot more. I saw some CPD fry last night but nothing today. They are still tiny so will keep an eye out.

Hadn't seen the shrimplets since the W/C so assumed they were either fish food or 40% water change is too much for shrimp. Another water change today and it turns out they are just great hiders. Definitely too big to be fish food now.

No further signs off CPD fry. Now that I know what I am looking for I realise I have seen some before as well as eggs. Its still early days but I guess if I want to breed these I'll need to set up a nursery.
OP

Been a while. The jungle side has filled up nicely and my concerns about the shrimp population being self sustaining were totally unfounded , and I have plenty of different sizes. I am going to have to re-think the carpet as the sags are surviving but little more than that. I suspect its simply a case of not enough light so suggestions for an alternative are welcome. The plants have taken a serious battering over the last couple of weeks as the lights are mostly off in my efforts to keep the temperature manageable. Not a problem you usually associate with the UK but living here means no aircon and homes that retain heat by design. The air temp in this room was 28.5C at 5:30 am on Monday. Thankfully most evenings the room temp does drop to around 25 or 26 but the tank is usually close to 30 by the time I get in from work.

The high temps also mean no further spawning activity from the CPD as these need between 22 & 24 for that to happen. The original fry did not survive so I''ll have to wait for the temp to drop before having another go. 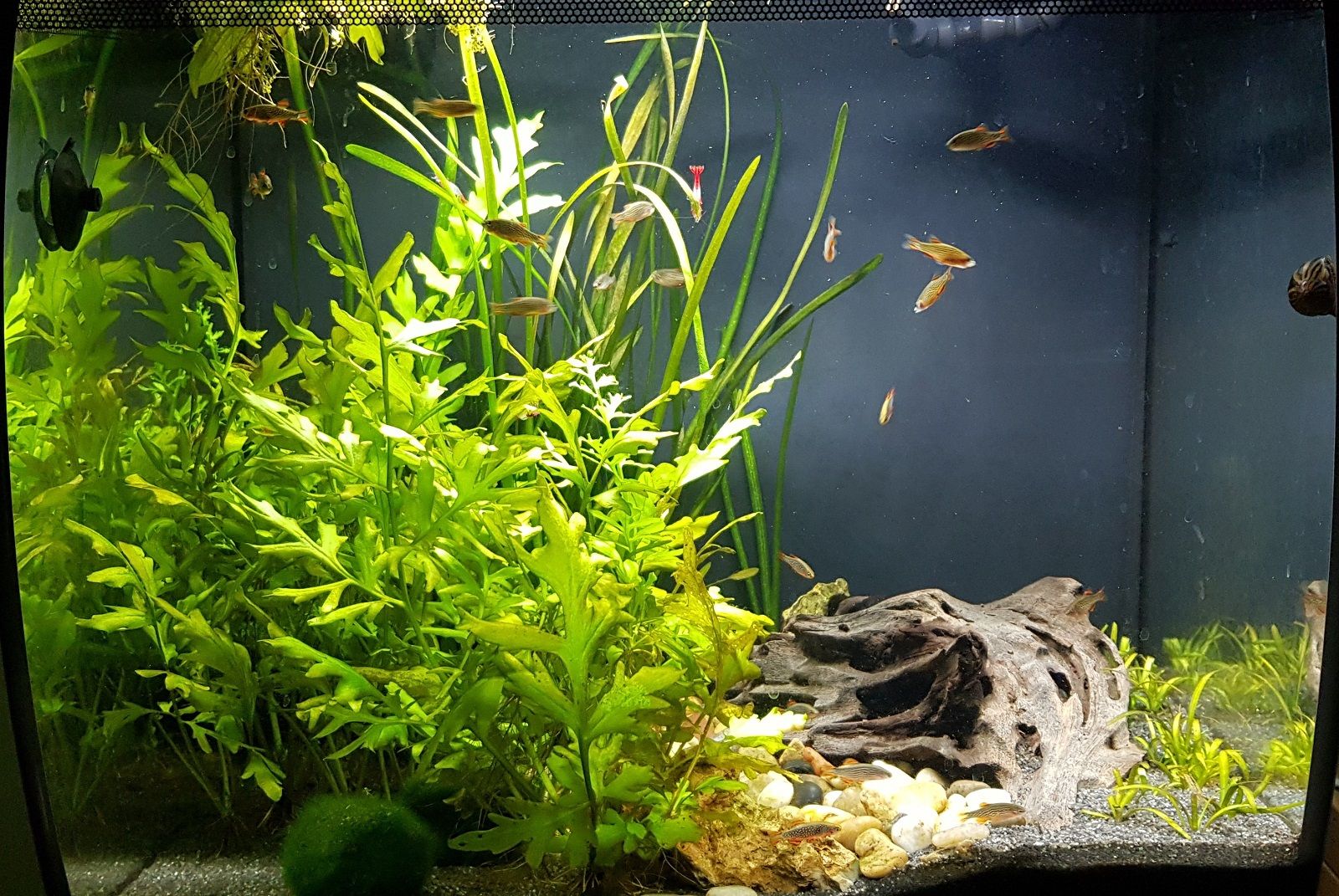 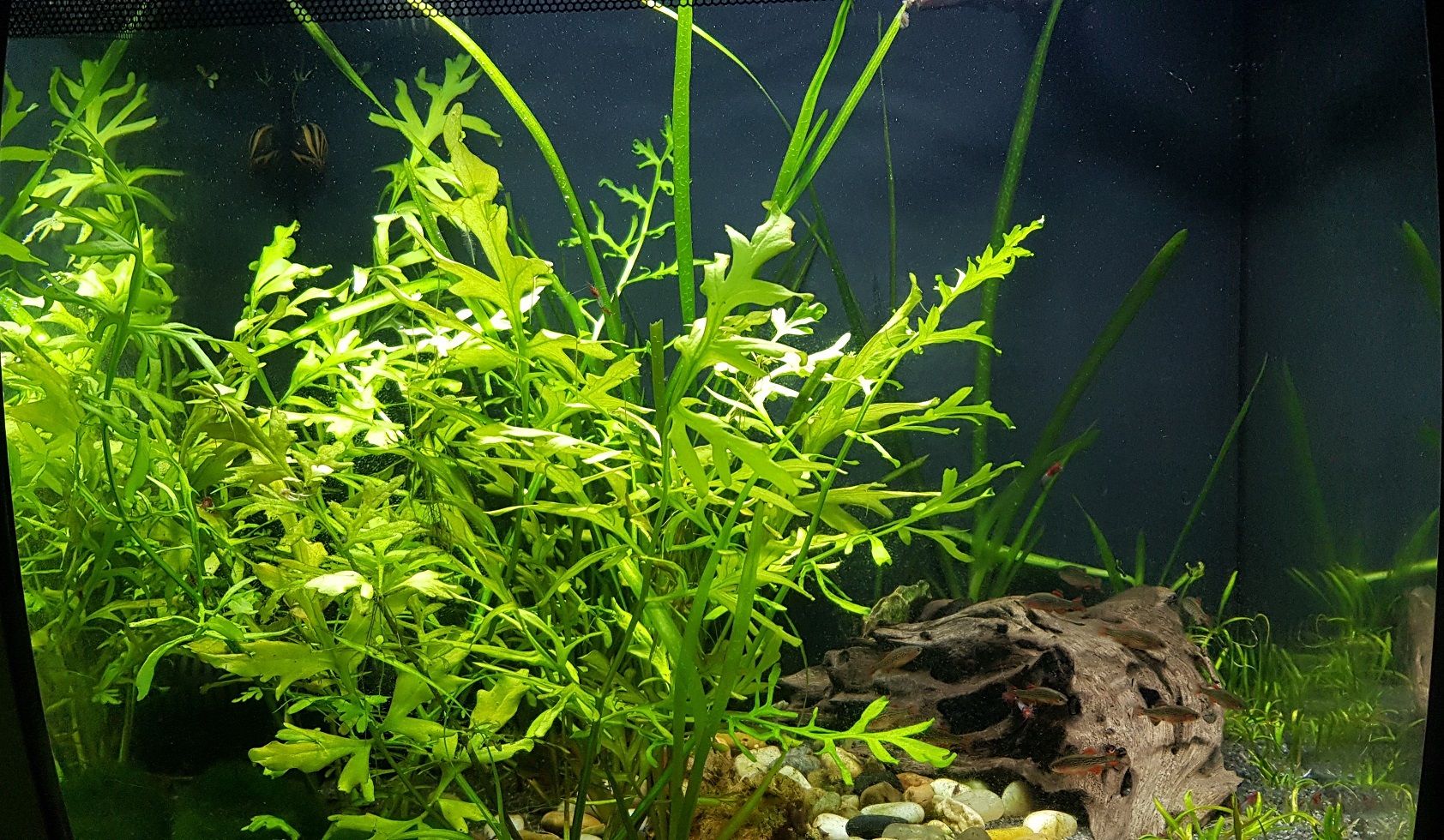 Been a while - doesn't actually look too different .
Plants have recovered nicely after summer. Just done a water change and thinned out the water sprite. Temp is back to 23C. I did have a problem with plants getting burned and it turned out to be too much flourish complete and possibly not enough light. I now use no ferts and everything seems to be working. My latest attempt at the carpet is helanthium tenellum. This is taking frustratingly long but it is spreading so I'm not going to mess with it. I have got rid of the duckweed so no more floating plants. I'm pretty much leaving it to go jungle so maintenance is a doddle - 60% weekly water changes and a rinse of the filter sponge. Clean the motor and pipes once a month and that's all it gets.

I did change the stock pump for an Eheim 300 a while ago and turned that down to minimum - so its quiet and the flow is low. Plenty of eggs from the CPD but to date no fry have survived so when the time comes I will need to set up a breeding tank. There is no way I can count the RCS or MTS but I'm sure aquadvisor would tell me I am overstocked just on the basis of those.

What is interesting is that the RCS seem to have formed several distinct colonies in different areas of the tank (including the filter chambers) and each group pretty much stays to itself.
You must log in or register to reply here.
Share:
Facebook Reddit Pinterest Tumblr WhatsApp Email Link

I
Fin rot and lethargic yet again

The worst park job EVER!