How often do Gourami need to get air? Sick Gourami?

Ok, another one of Jan's long posts. I'm trying to use paragraphs now.

I have had two powder blue Dwarf Gourami's since June 1, 2019. They were some of the first fish I ever purchased and have been very healthy.

Suddenly one of the two NEVER comes up for air unless I force her to. Then she'll inhale some air and dive right back to the bottom of the tank. When feeding all the fish she doesn't leave where she is to get food. If I can get food dissolved close to her she will eat it - but very slowly and very small amounts. She looks thin.

This has been going on for over 3 weeks and she hasn't gotten any worse or any better. At first I thought about euthanizing her but then I thought I'd wait and see.

I searched online for how often Gourami's need to come up for air and can't find any information on it. Does anybody know anything about it? She has stationed herself close to an air bubbler - so perhaps she's getting enough oxygen from that.

I know that a large percentage of Dwarf Gourami's can get a virus - but in this tank I have 5 and they are all healthy and active, except for this one fish. So if she has it - it hasn't seemed to spread - does anybody know the symptoms of this virus? I can't find anything about that online either. My understanding is that there is not treatment.

Should I just wait and see what happens or should I euthanize her now? I kind of don't see the point, if this is a virus all the others have been exposed to it. She doesn't seem in pain - how does one tell? She's just completely inactive.

Oh, and one more interesting thing - one large Gourami from another species goes down to her and just watches her. They sometimes engage in a sort of mating ritual (I don't know if that is what it is, but it sure looks like it). They both wag their tails and slide and rub each other. The one doing this is a very strange black Gourami that USED to be silver with red and blue stripes and now has red and blue stripes on one side of his body and is all black on the other side of his body (you figure that one out LOL). At first I thought he was waiting for her to die so he could have a bite to eat but he seems to be more interested in mating. I have another of the same species but they are both males. The other one has turned completely black all over and ignores her. All are peaceful Gourami's.

So lots of questions - but obviously Gourami's don't need to come up regularly for air - she's easily gone over 24 hours without coming up for air - it's only when I force her to that she gets any air. I have no idea of the symptoms of the dwarf gourami virus to even diagnose her. Is this some weird response to mating and is she just preparing to lay eggs? Will that work with another gourami species?

Overstocked? Most likely but you'd never notice. About 1/2 these fish are very small and most spend the day floating around or sleeping in the weeds. Some I can't even locate on any given day because they hide so well. I don't have cloudiness or a Nitrate problem so as long as I don't add any more I think I'm OK.

What you describe is exactly what has happened to my last two Bettas. I am completely baffled. What will happen next is that the poor little Dwarf Gourami will slowly (very slowly) emaciate and shrivel up and wither away. Death comes slowly and painfully with the fish having to struggle mightily to get the surface for a gulp of air. What is odd is that my Bettas continued to eat well. My last Betta perished this morning. I hope this fate does not befall your fish. I think I'm done with Bettas for a while. They come to my house to die and it just bums me out too much to see it again anytime soon. I hope your fish recovers or that one of our learned colleagues here on the Great TFF Forums has an answer.
OP

Sorry to hear about your betta. My fish is a little different - she isn't struggling to get to the top and get air - she's not interested in even trying. She just sits in one place in the tank and only eats if I can shoot some food almost directly at her mouth (very tricky to do) - then she'll eat a few bites and quit. Dwarf Gourami's (up to 40%) get an untreatable virus - but I'm not sure if that is what this is - none of my other Dwarf Gourami's seemed to have "caught" whatever she has and behave as normal.

Both betta's and Gourami's have a labyrinth organ that allows them to breathe air. Presumable, they or their ancestors often lived in low oxygen environment or even environments that dried up and they would have to drag or hop themselves to a bigger puddle until it dried up. What a way to live!

Read an article written by a person confused about whether or not Betta's are obligatory air breathers (meaning they must have air) or if they are Facilitative air breathers (meaning they only air breathe when oxygen is low in their tank.) Well the article concluded that the Betta are facilitative while the Gourami's are Obligatory - but given that my Gourami does not seem to be interested in going to the top unless I force her - I have not once in the last 3 weeks seen her go on her own. (and I sometimes watch her for 20-30 minutes to see if she ever goes up for air, while the other Gourami's go up for air at least every 5-15 minutes or so and get air) She doesn't seem to be breathing hard but she's pretty immobile. She is within 4" of a bubbler and may not be lacking in oxygen. Something's keeping her alive.

My conclusion is that Gourami's are NOT obligatory air breathers or she should have died weeks ago.

But it doesn't mean she's not very sick. The mating behavior is all that makes her move and if my hand gets too close to her she goes flying off to the other side of the tank only to quickly return to the exact spot of where she was and not once going up to breathe. I have forced her a few times by poking her with a very long pipette, and she did take a breath but she is not compelled to do it on her own. I have to feed her with forceps and hope she doesn't see my hand or all bets are off on eating. Unlike my other Gourami's that will eat reconstituted Tubeiflex worms directly from my hand (as she used to do as well) she now want's nothing to do with me or even much food.

So I'm in kind of a wait and see mode. If this is contagious I should start seeing my other dwarf Gourami's getting sick by now and they are all as healthy as they can be. Behaving perfectly normal and eating me out of house and home. Now that they are used to me they are all very friendly fish. Nothing like the sick one that is terrified of me at all times now. 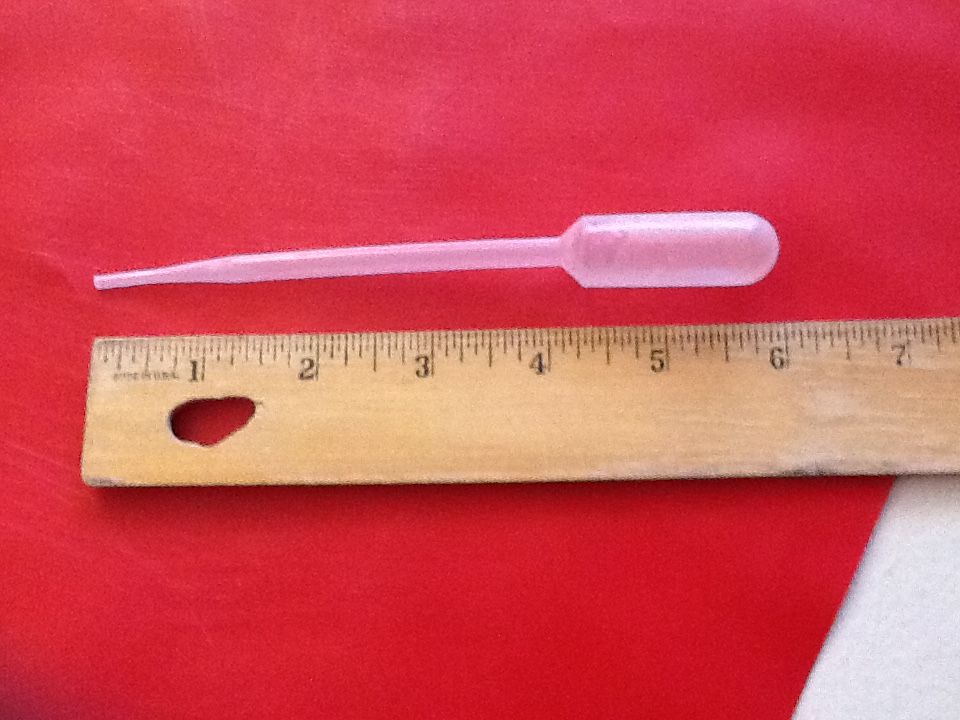 Try using a long pipette to feed your fish. I've been doing that with my fish so that the food doesn't swirl all over in the filter current and wind up scattered and uneaten. You can shoot it right wherever you want it.
Last edited: Oct 29, 2019
OP

I'm was using forceps but started using some glass pipettes and can set back quite a distance but any more and she's pretty leery anytime my hand is in the water - guess I shouldn't have been so aggressive about trying to keep her alive. I almost feel like I'm better off leaving her alone - less stress.

I'm in the tank everyday to remove debris from the uptake tube of the filter. I used to have a filter on it - which was a disaster - everything got sucked onto it ( mostly plant debris lots of food food) several times a day and the filtering would shut down completely - so I'd have to take the filter off of fit and rinse it out and put it back. This way I just pull out a vine or plant debris once in a while - part of the trouble owning a planted aquarium. It sucked up so much food at feeding time I couldn't tell who was eating more - the filter or the fish and the stench would be awful if I forgot to check it more than one day (plus it wouldn't be filtering at all after a few hours. I have some very beneficial but messy plants.
You must log in or register to reply here.
Share:
Facebook Reddit Pinterest Tumblr WhatsApp Email Link

HELP. My new emerald jade have a worm? And another have odd backline?