Help! Betta is lethargic and is breathing heavy

You can fast him or offer some sort of plant matter, or just feed him normally but most animals, including people and fish can go a day without food.
Last edited: Jan 29, 2022
OP
OP
Y

I think he was just staying at the top out of boredom/stress from there being nothing in the tank. I added a thin layer of black gravel and a anubis plant and will continue to add things after I see how he does with the gravel.
OP
OP
Y

It has been three hours since I put in the gravel and he is breathing heavy again. Do you think the gravel is the cause of this? Should I take it out immediately?

yeah get the gravel out and do a big water change.

This is weird but he seems somewhat normal again and it's been like a few minutes after my other post. He had a strange period of erratic swimming where he crashed into things, and I think that's what caused the heavy breathing. I'm still gonna take the gravel out and probably switch to sand. I'm also gonna test all the other objects that were in my tank just incase.

update: his breathing eventually got heavy again. I removed the gravel and he seems to be doing better.
Last edited: Jan 29, 2022

Something contaminated the tank while you were away. You might need to replace everything that was removed. At the very least soak each item in a separate container of water and rinse it before adding to the tank. That might help leach out whatever is causing the problem.
OP
OP
Y

Colin_T said:
Something contaminated the tank while you were away. You might need to replace everything that was removed. At the very least soak each item in a separate container of water and rinse it before adding to the tank. That might help leach out whatever is causing the problem.
Click to expand...

Do you recommend using a diluted bleach solution to clean the decor?

no, don't bother with bleach. just rinse and soak in water to try and remove anything that might be on it. Use cold water too, not hot water because the heat can cause things to leach out of plastics.
B

youbettadont said:
I recently transferred my betta back into his 5 gallon at my college. However, since it was winter break, I had to bring him home. The tank he is in right now has been running empty for a month. Before it was cycled, but since it has been empty, there are no signs of any ammonia, nitrite, or nitrate. My betta was doing fine the first two days that I moved him back in. Now he stays in his cave all day and breathes heavily; He has been like this for the past three days. He still came up to eat, but I have been fasting him for a day just in case. His tank is at a good 80 degrees with a heater and filter so I have no idea why he is suddenly so lethargic. I have never seen him like this before. Occasionally, he will come out if I stare at him long enough, but he just darts around the tank(somewhat erratically) for like 5 seconds and goes right back into his cave. Even thought there are no signs of ammonia ,I've still been doing 25% water changes daily just in case, but nothing has changed.
Click to expand...

He's not looking too well. He's still been hanging out at the top of his tank and barely moving. His fins look really clamped. His fin rot also seems to be getting worse. However, he has still ate every meal. So far I've only added a decoration and a silk plant. I want to wait about 3 days in between each item. I want to add more, but I'm afraid that it will hurt him even more. I'm scared that he won't make it by the time I test out everything. 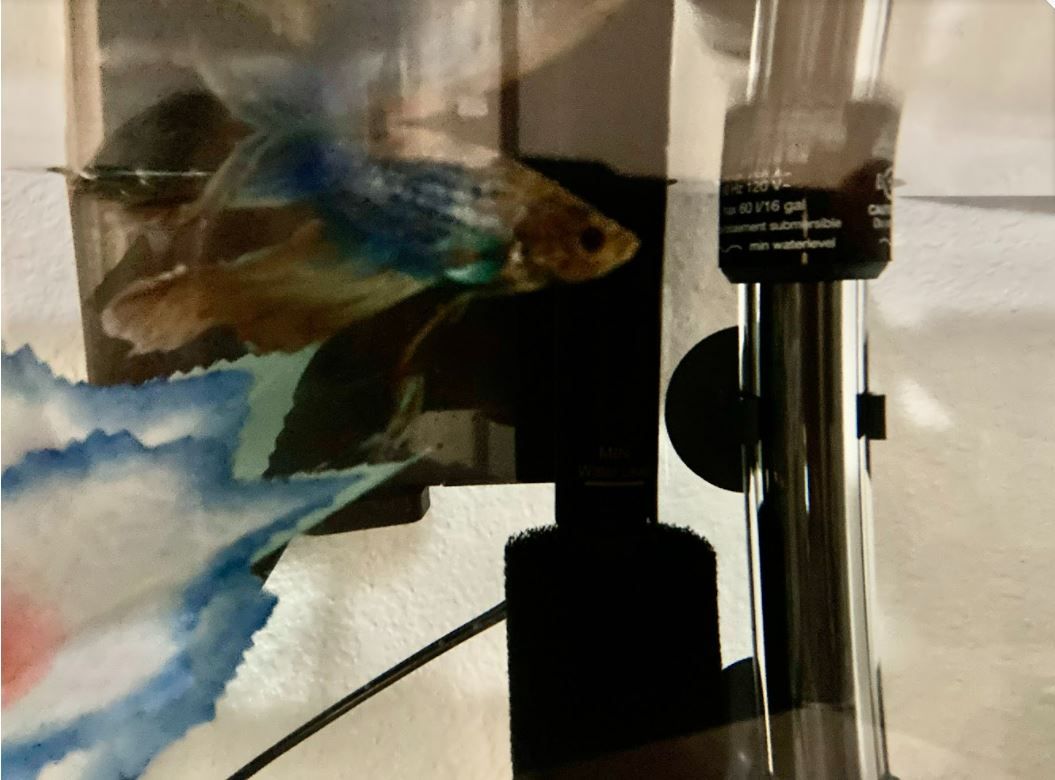 can you provide a better picture, I can't see anything in that one?

have you checked the ammonia and nitrite level in the water?
OP
OP
Y

I just checked and there is no ammonia or nitrite. I have also been doing daily 25 % water changes.

He has a bacterial infection in the dorsal fin and tissue under that.

You need a medication to treat bacteria and fungus.
I don't normally recommend anti-biotics but this might be one of those times they can be used.
OP
OP
Y

Colin_T said:
He has a bacterial infection in the dorsal fin and tissue under that.

You need a medication to treat bacteria and fungus.
I don't normally recommend anti-biotics but this might be one of those times they can be used.
Click to expand...

Yeah, I noticed that his dorsal fin started getting a little rough with white patches forming. Do you recommended any specific medication? I have primafix on hand but I'm not sure if that is the correct one.

Pimafix and Melafix won't do anything for that. You need an actual antibiotic like Furan 2, Kanaplex or something like that. I can't really advise on what is available due to being in a different country but those 2 drugs might be available at pet shops.
You must log in or register to reply here.