Care : Green star polyps are a very easy coral to look after and are a good choice for the novice aquarist's indroduction to coral keeping. The require moderate to strong lighting and moderate to strong water flow. If the water flow is too weak, they will not thrive. Green star polyps spread over the rock they are on in the form of a purple mat which the polpys are attached to. They are a peacefull coral that will not sting nearby corals, but, they are easily stung by others so be carefull when placing them. Normal reef conditions with an s.g. of 1.023-1.026 and a temperature of 72-78F will be fine. It is common for them to close at night and they fluoresce beautifully under moonlights before they close.

Editors notes: This coral will react to poor carbonate/alkalinity and poor salinity levels by closing up its polyps. And as peaceful as Green Star Polyps are, they can over-grow delicate hard corals and decorative clams if left un-trimmed.

Feeding : This coral gets most of its food from the zooxanthellae algea within it, therefore being photosynthetic. They can also benifit from feedings of plankton for corals.

Propagation : This coral can be 'fragged' by cutting the purple mat with polyps on it away from the rock and glueing it onto another piece of rock.

Comments : This coral will close under stress, so do not be alarmed that when bought, the polyps 'dissapear'. It is one of my favorite corals and i would reccomend it to anyone. 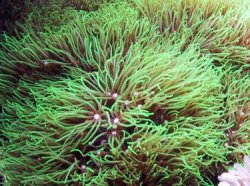