Origin: Found all over the Amazon and Plata basins from South America. They have also been introduced to south-east Asia and can now be found in Indonesia, Thailand, Cambodia, Hong Kong, southern China, Japan and the Philippines.

Minimum Tank Size: Should be kept in tanks about 12 UK gallons for a couple. Any smaller must be strictly controlled with regards to numbers of offspring in the tank because they have the potential to (if you want them) to produce a large amount of offspring. The minimum for one snail or a pair of the same sex is 8 UK gals.

Care: Very easy to care for. Hardy and adaptable, Canas apple snails can survive power cuts easily as they can breath air and cope with cooler temperatures for some time. pH must be over 7, about 7.5 is fine. The water can be dosed with Calcium chloride (liquid Calcium is its market name) to provide more Calcium for the snails to use with itâ€™s shell.

Feeding: Best all round feed is sinking pellets for catfish. Algae wafers, flakes, catfish tablets and any other sinking food suites Canas fine. Mine are living happily on a main diet of sinking pellets from an Angling and Tackle shop. The pellets are cheap but seem to do the snails very well. They also love some plants if they are growing too large in another tank. Vallis is loved by them. Vegetables are also enjoyed.

Breeding: They have totally separate sexes. The maleâ€™s penis sheath can also be seen in larger snails. To sex the snail, take the snail out of the water and hold it upside down. I tend to place them in a tub with one cm of water in the bottom. Prop the snail up in one corner. After up to ten minutes, the snail will begin to try to right itself. At this point, make sure the snail can just touch the side of the tub so they think something is there. They will try to come fully out of their shells to right themselves, just keep moving them slightly further away so they can still touch the tub. Eventually, they come fully out and now lift them up. The snail should be trying to grab onto something to right itself and if you look right behind the head, you should see a large, white bulge that some snails have, and others donâ€™t. Snails with the penis sheath are clearly males. Alternatively, watch them mate. The male will be the one on top and his penis will be visible. Although this is a good way of finding a male, the males will also mount other males so what you think is a female may not be at all. Males have a slightly larger shell opening which is only really visible in a mixed sex group of adults. Although no study has looked into this, it could be that the larger shell stops other males from mating with the female. The male stays on the female for a long time, again, possibly to stop other males getting a look in. The shell opening also appears to be slightly higher on the snails left side (the opposite side to the penis). This could be because the snail can then bite other maleâ€™s feet or body to stop them trying to mate. However, this is purely my observation on what my snails do and is in no way a scientifically proven theory.
The male will try to mate with another (not always female or the same species) snail usually daily if there is enough food to fuel him and the water quality is acceptable. Females lay eggs every 4-7 days. Canas become sexually mature at only 1â€￾ shell length. For some reason, my male prefers to mate with his older mother than with his smaller sister, I presume this because his sister is using most of her energy for growth rather than egg creation. My old female was bought in poor condition and is only 2â€￾ long. Snails stop growing nearly completely if there is not enough food to keep them going and instead concentrate on egg and sperm creation.
The female will climb out of the water to lay the eggs on a smooth surface. There should be a few inches (about 4â€￾ for adults) of space for them. The underside of condensation trays or aquarium lids are fine. Canas lay pink eggs which are a unique colour and can instantly define their species from the many other similar species. Canas females lay a good few hundred eggs. As long at they are kept damp (not underwater, the embryos will drown), the eggs should hatch out in 2-3 weeks. Again, this is temperature dependent. Babies browse on algae and will eat the pellets the adults do, though I would advise feeding them on sunken spirulina algae flake; this will be softer and easier to eat. They grow very fast. I purchased my young pair at about 8mm shell length, and after about 5 months, they are now approaching 60mm. The very last whorl of the shell is very large and adults have very globose shells. The last whorl is just visible in my young pair; if you look in the pictures, they are beginning to look more rounded.

Notes: Attractive under a red enhancing beauty light. There are golden varieties on sale as well, but my experiences of seeing Canas on sale amounts to private breeders and specialist websites. Their colours do vary slightly, the browns of the shell vary in shade and the stripes vary in thickness.
Many snails also seem to float around the tank for a few days. This is NOT a problem. Only if the snail is hanging out of the shell, not moving and rotting slowly with a horrific smell is it dead. It can then be disposed of in the appropriate manner. I would not advise flushing it down the toilet or sink, I have had to sort out a plumbing problem due to a dead apple snail shell and it is not pleasant.

This is a Canas in a typical sleeping position. 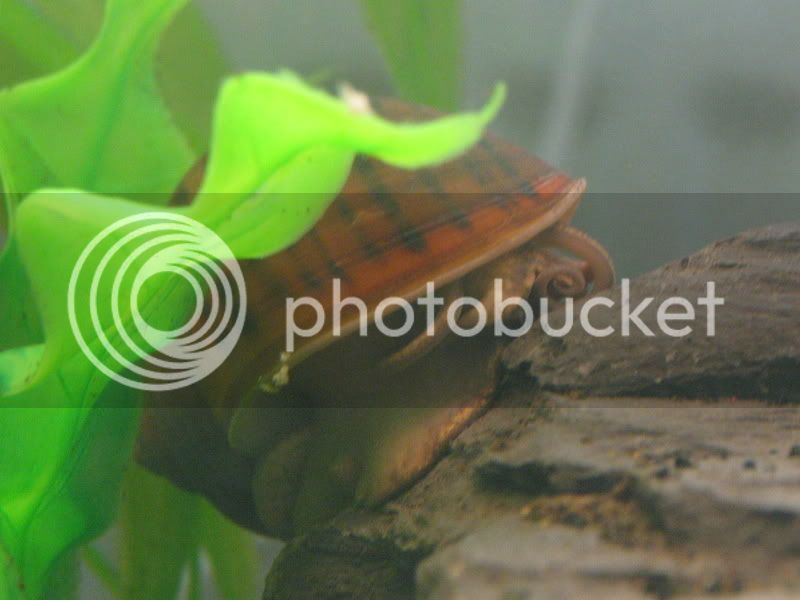 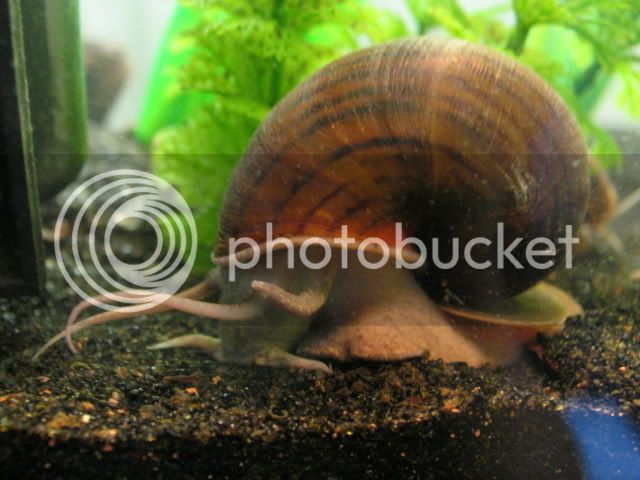 A close up of the female. 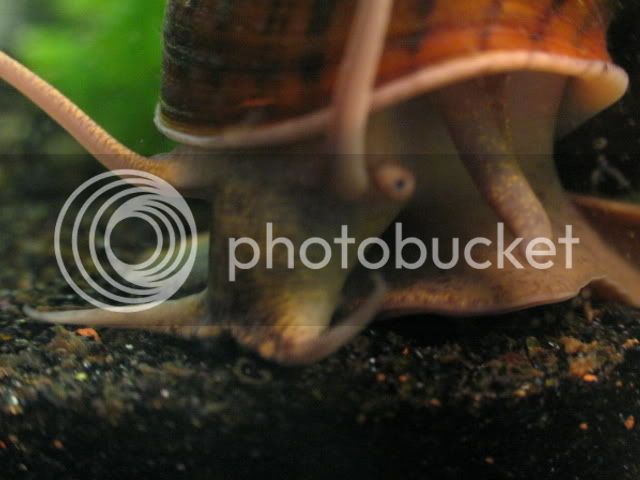 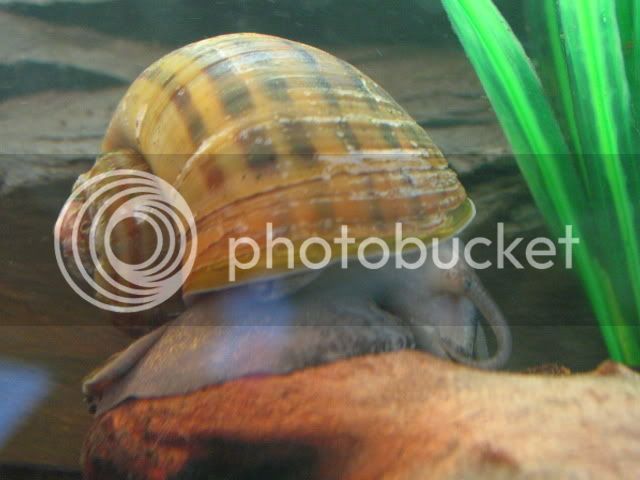 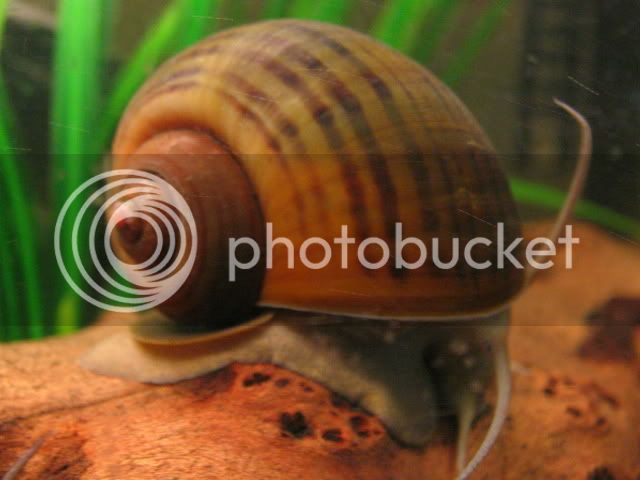 This is what you should see if your using the above method of sexing a Canas. This is a female. 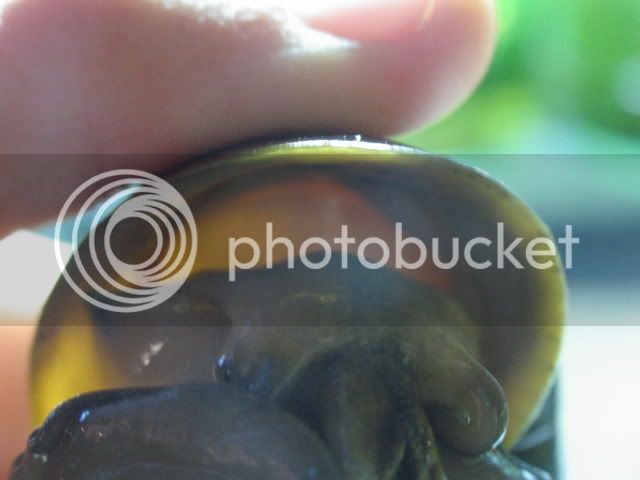 And this is a male. Note the large white penis sheath above the head just to the left. 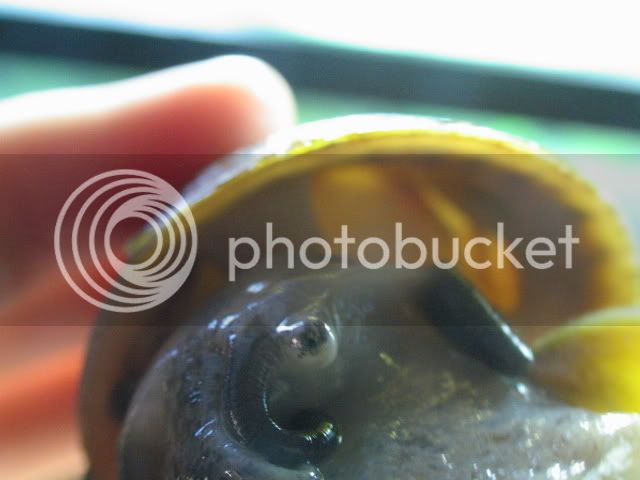