Common Names: Brazilian seahorse, yellow seahorse, etc. (The common names are numerous, and many of them are used for other species of hippocampus).

Care: Reidis do best at temperatures between 70 F and 74 F. They also need a lower water flow than most reef tanks. Most seahorse keepers have about half of the water flow that average reef tanks have. Seahorses also need several hitching posts, which can be macro algae, tonga branch, or anything they can safely wrap their tales around. The minimum tank size is 29 gallons for one or two pairs. Tank height, rather than length, is important for reidi (as will all seahorses), since they are a tall fish. Seahorses should not be kept by themselves, as they are social animals. Recent findings, however, suggest seahorses do not mate for life, as once believed. Options for reidi tankmates are limited. They cannot be housed with large, fast, predatory fish, or very boisterous fish. Even fish that are considered community fish, such as clowns and angels, are not considered good tankmates for seahorses because of the potential food hording during feedings. Anenomes and any stingings corals cannot be housed with seahorses. Most crabs, except hermit crabs and filter feeder crabs (i.e. porcelain crabs) should not be housed with reidis. Reidis should also not be housed with any clams, scallops, etc because of the potential risk of the clam/scallop accidently closing on the seahorse.

Feeding: Seahorses will not actively search for food the way most fish do. They are slow, ambush predators. Many can be trained to eat from a feeding dish, which is helpful to determine the amount the horses are eating. Tank bred reidi's main diet is frozen mysis. Other acceptable foods are ghost shrimp, krill, red shrimp (Halocaridina rubra), and brine shrimp (but only as a occasional treat). Some people also enrich these foods with suppliments like SELCO, Vibrance, spirulina, and beta glucan. If the reidi are wild caught or tank raised, they will be more likely to only eat live food. Some WC or TR reidi can be trained to eat frozen, but there is a chance they could go off prepared food at any time.

Sexing: Sexing is rather easy, once the seahorses are old enough. The males have pouches below their abdomens, and the females have no pouches.

Breeding: It is not uncommon for reidi to breed in the aquarium, as long as the tank is high enough and there is ample open space for the courting rituals. Males will often do "stomach crunches" and inflat their pouches with water to impress the female reidi. When reidi of the opposite sex frequently lock tales, and court frequently, it is a good indication they will try to breed. The female will try to deposit her eggs into the males pouch, where he then fertilizes them. (I was extremely lucky to actually see one of my pairs attempt an egg transfer, unfortunately they dropped the eggs) The gestation period is approximately 2 weeks, at which point, the male gives birth. Reidi fry must be raised in a seperate tank because they are palegic, meaning they cannot hitch right away. If not given the proper current in the fry tank, the palegic fry can snick (suck in) air, which would kill them. There are several different kinds of fry tanks, and methods of feeding reidi fry.

Health Concerns: The best way to decrease the risk of health problems, is to get captive bred reidi. They are less likely to be exposed to pathogens and parasites. If you do get WC or TR reidi, they must be quarantined for atleast a month or two (captive bred reidi also must be QT, but not for the same length of time). Freshwater dips are also a popular practice to help rid the horse of any external parasites (care must be taken that pH and temp match exactly to prevent shock). Even captive bred seahorses can be afflicted with diseases like weak snick (the horse tries to suck up food, but has trouble), snout rot (a bacterial infection of their snout), vibro (a bacteria strain that Syngnathidae's seem very suseptible to), and internal/external gas bubble disease. Immediate treatment is key, which is why it is recommended you have a "medicine cabinet" of proper medications (diamox, neomycin, triple sulpha, Formalin 3 are just a few) before you even bring the reidi home.

Comments: Hippocampus reidi is a very rewarding fish to keep. They do have special requirements that require much planning and research. When done correctly and patiently, seahorses can be a wonderful animal to take care of. 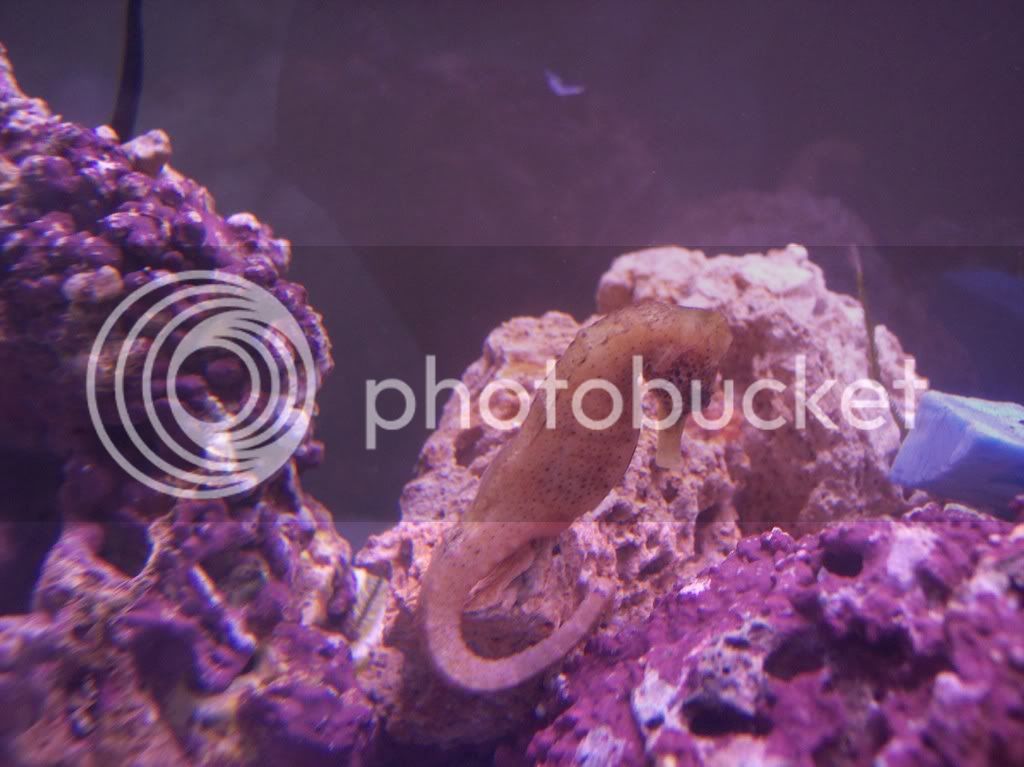 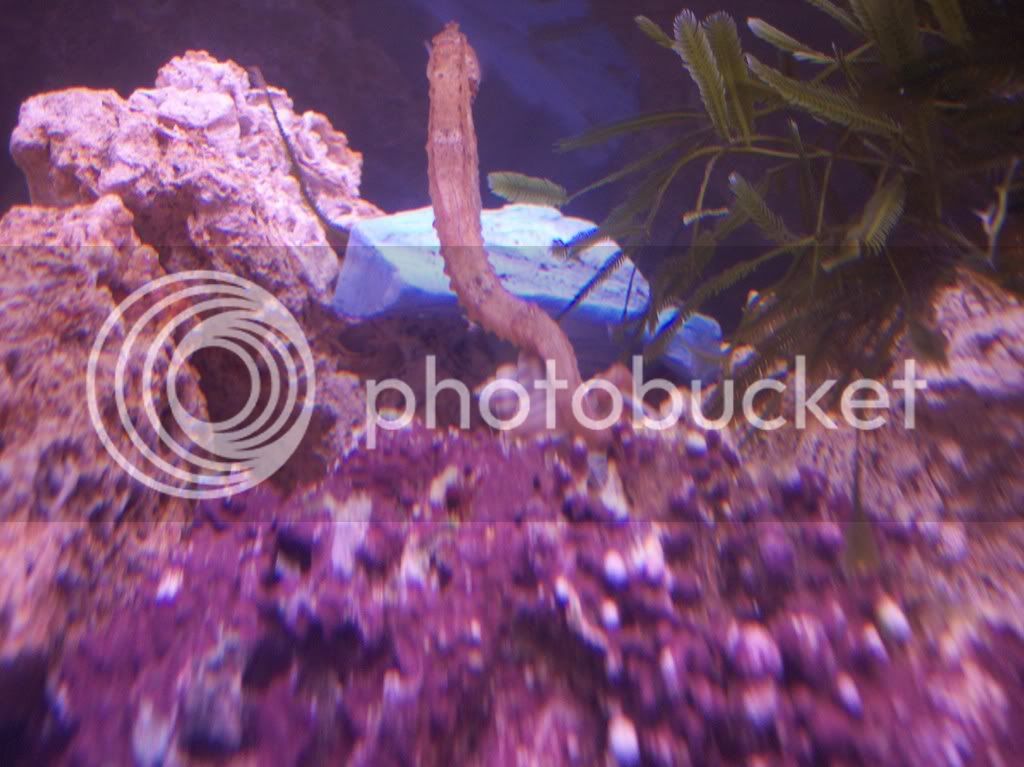 One of my males making a hitching post out of my nass snail.

Heres my pair when they were first added:
Female: 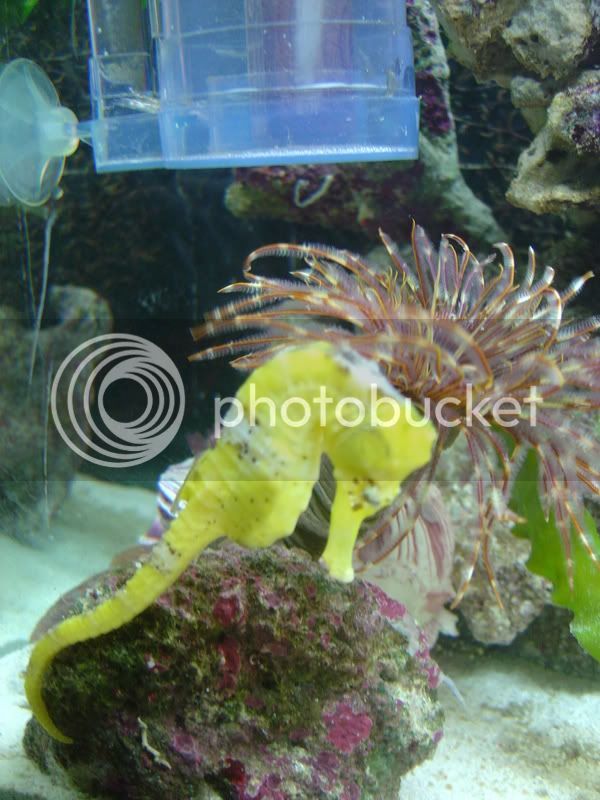 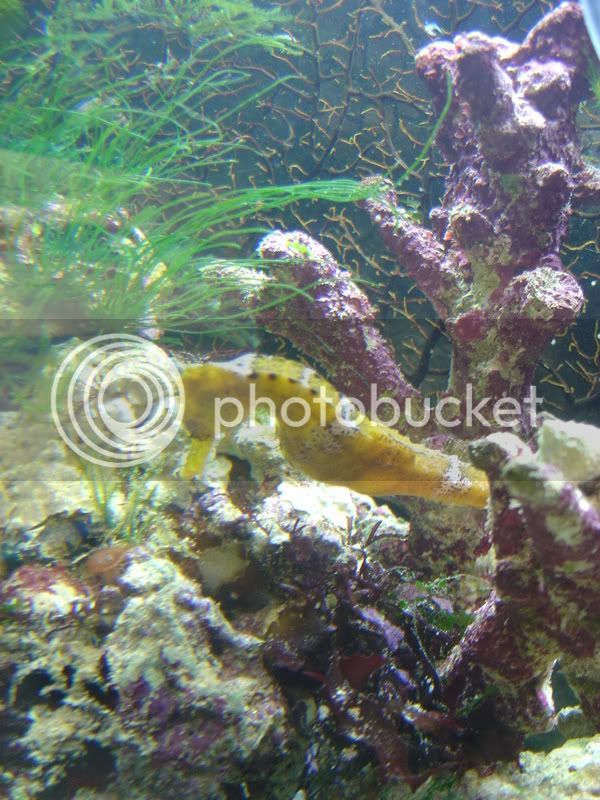