Certainly is a mollusc of some sort, however that is not very helpful as there are over 7500 different types

I have tried lookingit up but have had no luck, must get myself a better book on Invertebrates and Googling just brings up hundreds of photos eeekk

Bet someone will know what sort it is

Evening all.
Is it just me or did any of you feel the way I do now with my newly setup tank?? No matter what I do with the rocks it never looks right and to top it off my water has turned ever so slightly milky!!!
Now I dont know if its because of me introducing the gorgonian thing ( he thinks

) My reason for thinking this it is shedding what looks like some kind of mucus, now this was a cutting from someones tank that I had to trim with a stanley blade and fix to a rock. 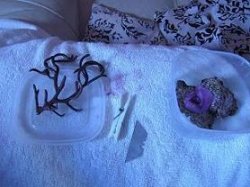 I was warned it would take a while to recover 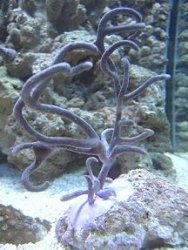 When I came home from work today all of the polyps where showing and the gorgonian was shedding its skin or at least that what it looked like, also maybe the milky water could be caused by the residue from the epoxy i used to secure the gorgonian to the rock???

I also thought I had lost a hermit as I noticed the remains of one however All Hermits are accounted for! Do they cast there skin???

Finally another picture of my tank before the milky water I think I'll leave it a couple of days and if still the same carry out a water change. 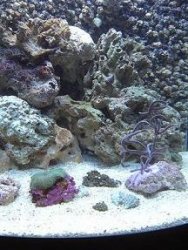 The epoxy/miliput stuff looks like its smoking when you first put it in the water. It makes the water loo cloudy for a while. I leave mine to set a bit in a cup of tan water first. Stops it happening as much
N

New member here. Ive been reading most the threads as I have found people both informative and helpful. Certainly better than the literature I got with the Boyu 550!!

I am completely new to marine aquatics, just setting up my tank and have and have a few questions:

Does it matter which way you have the filter medium and the thermostat? I have mine the opposite way to Seffie.

The filter medium, is the one that come with the tank suffice, or do you replace with LR (I am assuming that means living rock?). LR seems very expensive to be putting in the chamber?

Is it worth upgrading the skimmer, and if so what do you reccomend?

Start your own thread, we can help you there.

But a few quick answers for you

Empty compartment can be used with broken up LR or better still stick a sumbersible LED in there and a bag of chaeto for Nitrate exchange.

to the salty side Nel

Can I ask you a big favour, copy and paste your post to a new thread in either the nano forum or the marine journel section at the top of marine chit chat

we can then follow your journey and help as well

Reet, I took out all media from the back chambers

You usually put lr rubble in, they are the small pieces that drop off and can be found in the bottom of most holding tanks

I would keep the stock skimmer, it works fine

Remember the salty world is exciting but patience is a virtue and the biggy, the only stupid question is the one not asked

Reet, I took out all media from the back chambers
Click to expand...

He He, I have managed to get Southerner typing in a Northern accent.

Reet, I took out all media from the back chambers
Click to expand...

He He, I have managed to get Southerner typing in a Northern accent.

problem is she is telling the truth

Don't worry Seffie, I have lived up ont' moors for 4 yrs now, previously had wolverhampton accent, though not broad, my nan made sure of that.

It just seems to stick up here though, my accent is becoming rural Lancashire, not even town lancashire. I suppose the only people I see regularly are farmers etc so its no surprise there.

I do love the accent up here though, there is something so friendly about it.

Loving this thread - thinking about the rock wall (great job on yours btw) for my tank new TL550 - did you find it sat happily at the back without fixing it to the back?

with your live rock - is it best for it not to be built up at the sides - touching the Perspex?

Yes, best to keep it away from the 'glass', so it is easier to clean

seffieuk said:
Yes, best to keep it away from the 'glass', so it is easier to clean

S
Not getting all alerts

N
Time for a change?

47 minutes ago
emilyp123
E
Search tags for this page