Ammonia Sources in the USA, UK &

mandiemoo said:
For those in the UK that have had problems getting them in their local shop -

Jeyes Kleen Off Ammonia (500ml) - unfortunately the cost of postage is pretty much double the cost of the item.
Click to expand...

Are we sure then? The Jeyes stuff is OK? Has anybody definitely used it and ended up with healthy fish?

I've used it, and it's fine

Brill. I can get it round the corner. Any idea of its concentration? If not, how much to add to 8 gallon tank for start of cycling?
D

it's quite hard to give you a precise answer. The concentration is 9.5%. I use a dropper to put it in the water, it's a lot easier to measure it that way. But there is the problems, droppers come in all different sizes, mine is quite a small one, but for my 5 gallon i had to use 45 drops to get it up to around 5 ppm, so for an 8 gallon, i'd say roughly around 65 drops.

Thanks. I'll go for 65 drops or thereabouts. My testing kit hasn't turned up yet but I can't wait to get underway!

Upon checking the fishless cycling pinned thread, 65 drops may or may not be excessive! Maybe I'll wait until I get my kit.
D

I thought that as well when i was doing it, but it's not the case. Other people who were using Jeyes had to put a similar amount in, not really sure why. But it's not too much. I added the drops very gradually, did 6 ammonia tests until i got up to the desired amount of Ammonia, It took around 5 hours for me to eventually add a sufficient amount, so hopefully it can save you some time.

Also, this may seem like an insulting question, but it's not supposed to be, but it definitely is the Jeyes Kleen Off Ammonia? The reason i ask is because Kleen off is a line of products by Jeyes, and they do other cleaners in very similar bottles (i thought i'd finally found the ammonia, but it turned out to be some other type of cleaner). So, just making sure you aren't putting something nasty in there

I'll take your word for it and have added 65 drops. It's definitely the right stuff - the smell nearly burned my nose off and reminded me of chemistry lessons and bleaching my moustache.

(Plus it's the same as the pics in this thread).
D

ok cool, don't add any more until you get your test kit though. When is that arriving? You should test your tap water as well, see if it has any of the 3, and what's it ph is.

Remember, the 65 was only a rough estimate with a small dropper, depending on the size of yours you may have put slightly more than 5ppm in, but then there's no fish in there, so it really doesn't matter

Here's a simple formula for working out roughly the number of drops of ammonia you need to get a particular ppm in your tank:

Where:
ppm is the concentration of ammonia you want (as reported by a test kit);
litres is the capacity of the tank;
percent is the percentage ammonia, as reported on the bottle.

For tanks in U.S. gallons, use this:

So for example, using a bottle of 8% ammonia and aiming for 5ppm in a 25 gal tank:

100 drops is about 1 teaspoon, so in this case just measure out a teaspoon and 20 drops of ammonia.

Hope this saves some time and test kits!
S

Yup that's the brand I use (one at the very top left).

Amazing. Do people still do this?
I just use a bottle of Safestart or Stability or 'One and Only' and use a ammonia neutraliser like Amquel+ or Prime for the next 5 days.

I add the fish right away. The tank cycles in less than 5 days and the fish are not exposed to ammonia or nitrite. The Prime/Amquel+ renders the Ammonia/Nitrite non-toxic if there is any lurking about as the bacteria does its stuff. It's important to only use the above brands too.

OK, costs more. (But then test kits aren't cheap either). But it allows me to set up a tank immediately with 100% safety.

There is a link about it here: Hi-tech method

EDIT: Found it at Ace Hardware in Studio City on Ventura (just in case anyone else needs it around here)

Has anyone in Los Angeles Valley area found a good place to get the ammonia? Walmart is no where in the area (sherman oaks) and the stuff I found at Ralphs has surfanctant in it. Thanks in advance!
Michelle 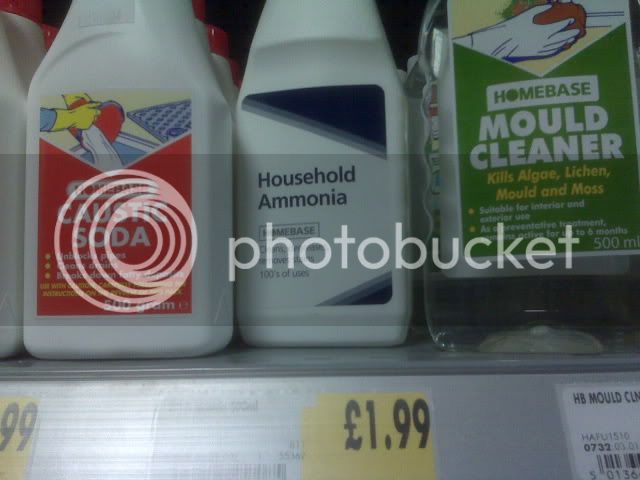 How long can fish carry eggs?