Why some L numbers are the same 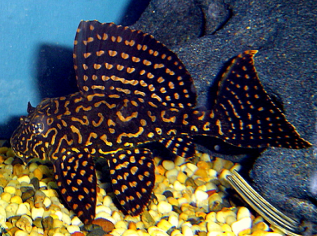 A much sort after monster catfish for a large freshwater tropical aquarium is the stunning Gold Spot Pleco. Pleco’s are flat on the underside from head

The two "L" numbers are the same species, Pterygoplichthys joselimaianus, according to all sources I have accessed. Here is the entry from Ferraris, "Checklist of catfishes, recent and fossil (Osteichthyes: Siluriformes), and catalogue of siluriform primary types," Zootaxa 1418 (2007).

The Ferraris checklist is available online for free:

I have not accessed Weber's paper, and the two "L" numbers might be mentioned therein. I would suspect that it was simply a matter of two different specimens collected by different collectors being assigned an "L" number. I am sure this must often occur. When the fish is actually analysed and described (and named) as a distinct species, this would come to light.

In the case of all "L" loricariids, and also the "C" and "CW" Corydoras fish, they are "discovered" and assumed to possibly be a new species and thus assigned the number for temporary identification. Only the formal description can determine if the fish is or is not a new distinct species. Geographic differences in thee external pattern of any species may suggest it could be a distinct species, but it may or may not turn out that it is.
You must log in or register to reply here.
Share:
Facebook Reddit Pinterest Tumblr WhatsApp Email Link

B
Fuzz on plants