Tank of the Month

​
PLEASE VOTE!
We have 9 awesome tanks entered in Fishforums' June 2021 Tank of the Month contest featuring tanks sized at 16 gallons and smaller. View all the tanks and descriptions below and then go to top of this thread and click on your choice for TOTM and then click the "Cast" button.

Please Note:
Any attempt to influence competition results, other than by casting your allocated vote, is not permitted and may result in your entry being removed and / or further action being taken. This is a public poll so source of votes can be viewed.

Winner will be awarded a neat "Tank of the Month Winner" banner in his profile area and will be featured in a "TOTM Winner" thread for all to see and to comment on. Winner will also be added to our TOTM WALL OF FAME 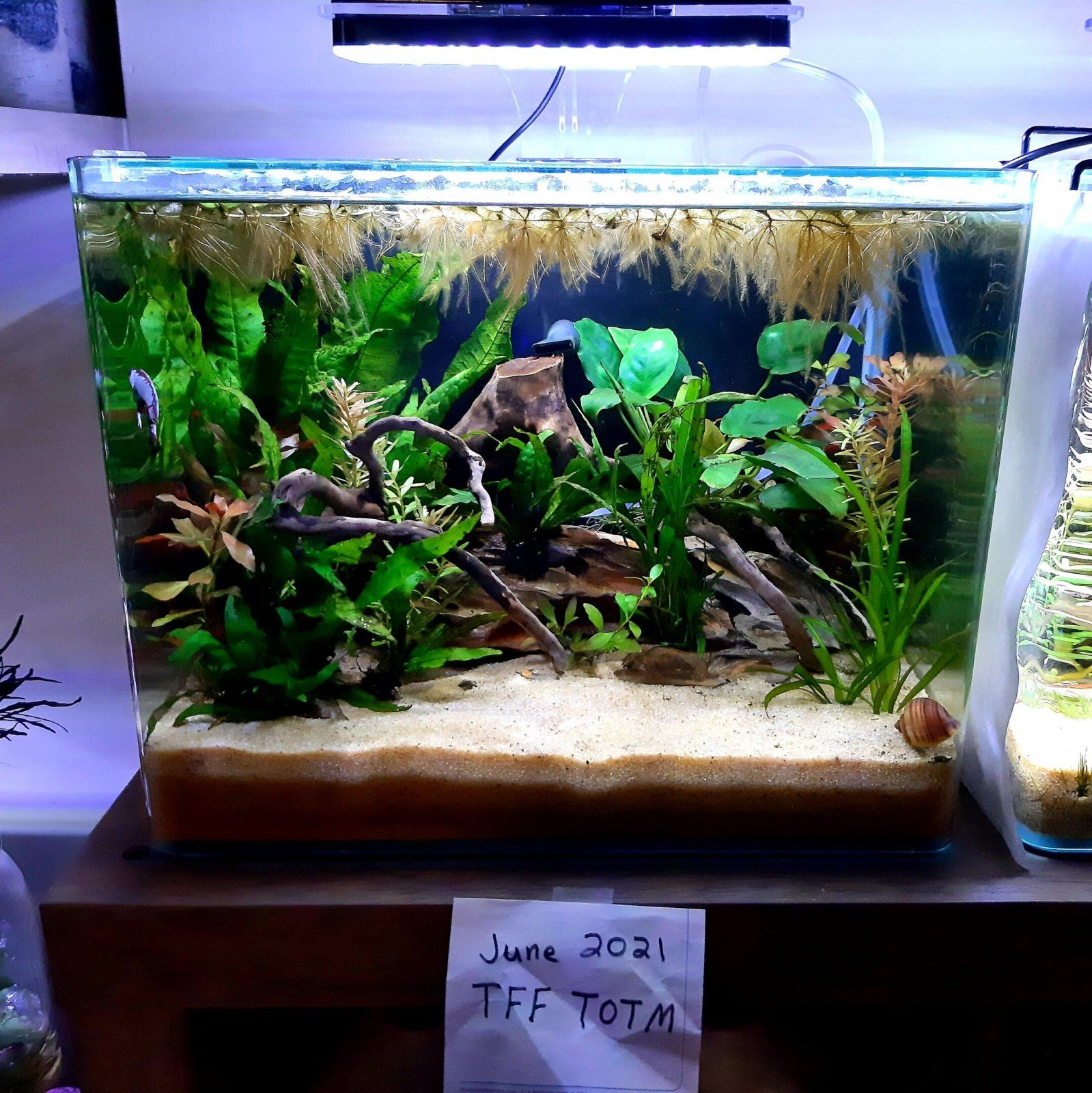 My old man betta, my four year old named Blue, lives here with 8 Ghost shrimp. The tanks 4 months old but inhabitants are only about 1 or 2 months.

We do a 50% water change every week, we use seachem flourish root tabs for the plants. I've ordered a liquid fertilizer to use instead after the tabs are gone.
Blue and the shrimp eat Fluval bug bites, daphnia, omega one sinking pellets, betta pellets and spirulina 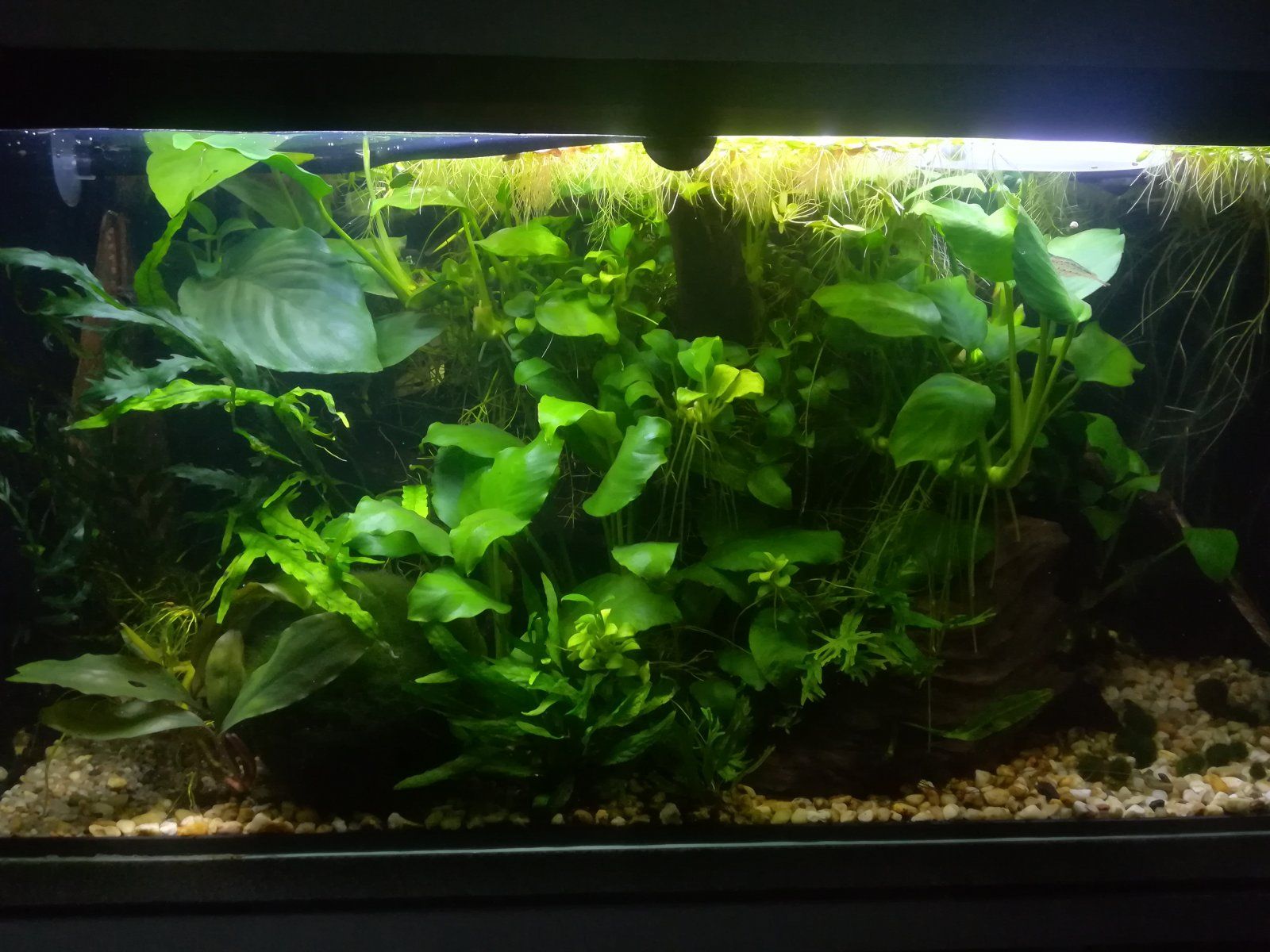 Size: 30l (about 8 gallons)
Age: The tank itself has been running for over 4 years, but during that time it went through several big changes so it looks nothing like it used to in the beginning. It has always housed rescue bettas.
Fauna & flora: Rescued male halfmoon betta with mild fin damage. His name is Dagon and he's very laid back, I've had him for just over 4 months. There's a group of cherry shrimp in there with him, as well as 5 huge amanos. They occasionally fight over food, and Dagon chases the smaller ones whenever he sees them, but there's tons of plant cover so I'm not too concerned. The plants are all low-maintenance, slow growing & epiphytic - mostly various anubias cultivars, Java fern, bucephalandra, bolbitis, marimo balls and lots of floaters - red root, water lettuce, salvinia and frogbit.
Water parameters: Haven't measured them in a while, but last I checked ammonia & nitrites=0, pH was somewhere between 7.5-8 and the nitrates were around 2-5ppm.
Ferts: It's a low-tech tank, I only add liquid carbon (mostly spot-dosing algae which appears under the lamps) and either just micros or all-in-one. I'm still experimenting, about to start a new bottle of specialized fertilizer for shade plants.
Lighting: 2 standard LED lamps, 6500K, about 30+ lumens/litre.
Filtration: Just a small old internal filter with sponge media. It has been running since the beginning with - touch wood - no issues.
Aeration: None, just surface agitation/circulation + plants.
Tank maintenance: I change about 1/3 of the water every week and clean as much of the gravel and glass as I can, given the intricate hardscape. I also add catappa leaves on a regular basis.
Feeding schedule: Twice a day (1 day fast every week), a mix of pellets, flakes, freeze-dried daphnia and frozen brine shrimp. The shrimp pick up whatever the betta didn't manage to eat + decaying plants + catappa leaves. I rarely supplement their diet with anything, especially in winter, although every once in a while I feed them boiled nettle leaves, baby spinach or carrot slices.
Last edited by a moderator: Jun 4, 2021 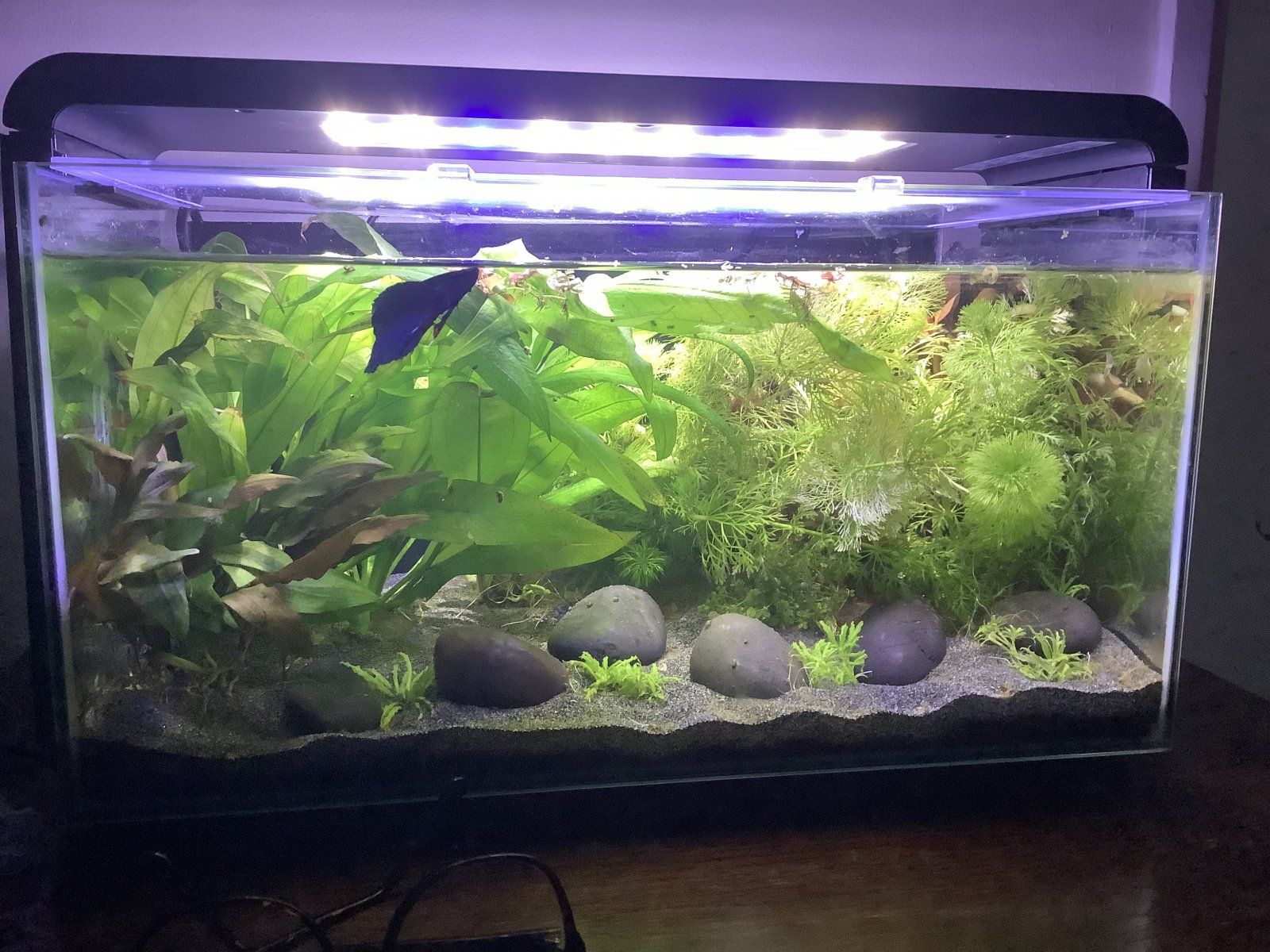 Here is my entry for the June 2921 TOTM - it is my only inhabited tank so far! I started with this tank with the sole purpose of housing one male Betta on 7th March 2021!

It is a Home 30 aquarium, that is reported to hold 25ltrs (although the actual tank measurement come up at slightly less that that without an air gap). I chose this tank as a first time fish keeper, believing it would have everything I needed in one box. Within a few weeks of having it I had removed the built in container for the filter and heater and purchased a separate Eheim filter.

I knew from reading that Betta fish are safer with live plants, as plastic and silk plants can damage their fins. So I’ve put lol I’ve plants in. Newbie, hands-up here, other than the Amazon Sword (x2) and red root floaters, I have no idea what the other plants are! I chose “easy” to care for and didn’t make a note of the names

It did have a big piece of (again unknown) wood/root but Blue managed to damage his tail on this so it was removed. This weekend I put some smooth, rounded stones in the foreground and have pulled up, split and replanted another unknown plant.

The water parameters are Ammonia 0, Nitrite 0, and Nitrates about 10 ppm; this is achieved through mixing tap water 50/50 with RO water. I have hard water 16dH and 281 ppm (mg/l calcium carbonate). I change 50% of the water weekly, and still haven’t got the hang of totally cleaning the surface of the sand without removing it all

I have one Betta, Blue, in the tank along with an unknown number of bladder snails. He has a meal of live brine shrimp or daphnia in the mornings and pellets in the evening and I feed him 6 days a week.

I think that’s as much as I can tell you 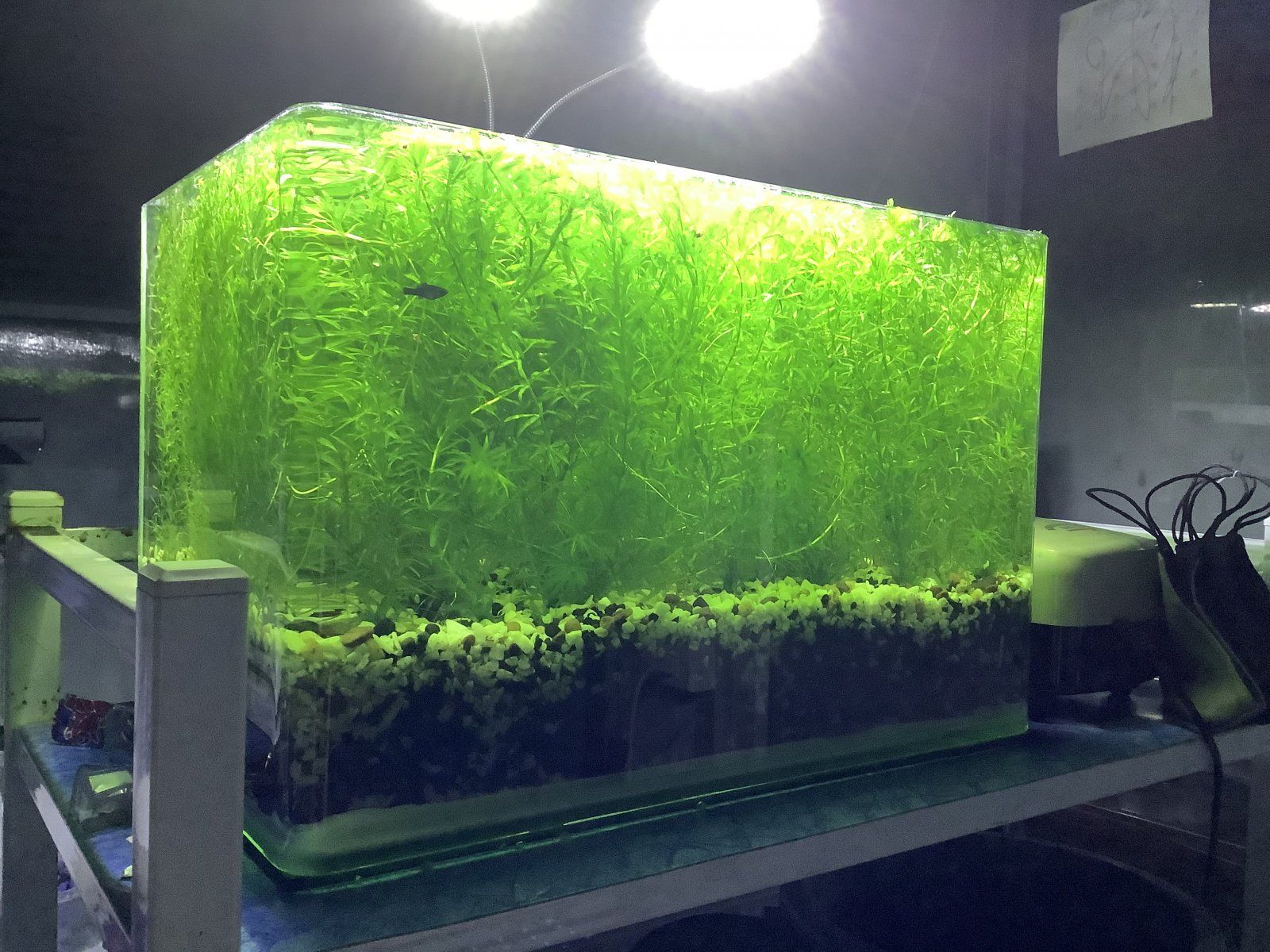 Hello...here is my 6 gal QT tank, yes, I am aware of how plants took over the tank and will be trimming them tomorrow 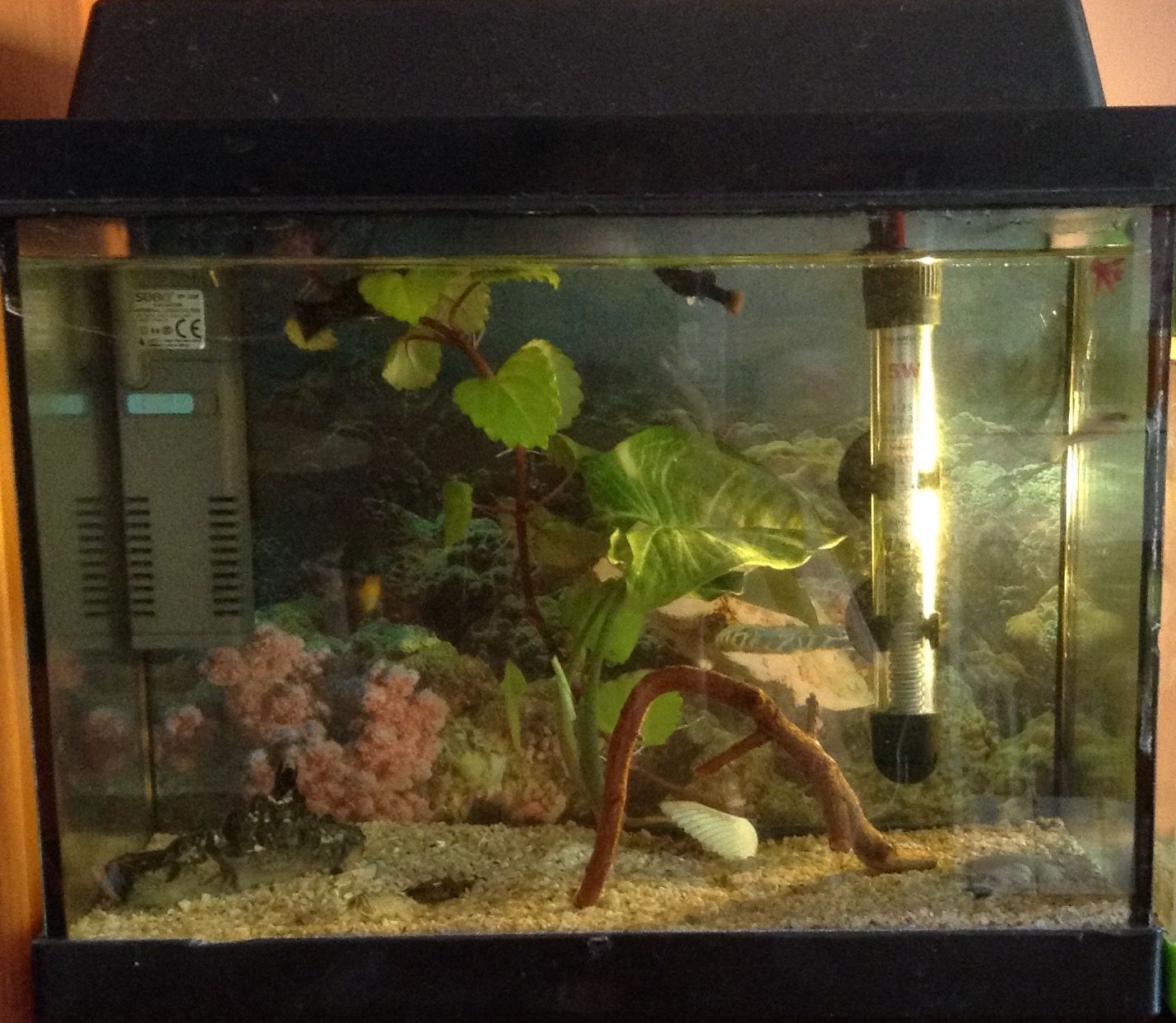 I know my tank isn't the best looking but I decided the join the contest anyway. So my tank is a 5 gallon. It has a yellow led lamp sticking behind it. The gravel is just small pieces of natural seashells (I bought that because it was the only natural gravel at the pet store.) The live plants are actually house plants! I did an experiment to see what types of house plants can live underwater and was successful with 2 types! I dunno what type of house plant they are. I have 4 mollies in there. (They are not adults they are only a few months old) I do 50% water changes every 2 weeks. I have a filter and heater. I also have a small gray decoration of a ruin of a ship. (Bought it because it looks cool. I also have a small branch/wood in there. Dunno what type of wood it is. The age of setup is about 8 months old but the tank is a few years old. The pH of the water is about 8.2, nitrite: 0, and nitrates: 4-5 ppm. That's about all I can tell you about my tank
Last edited by a moderator: Jun 4, 2021 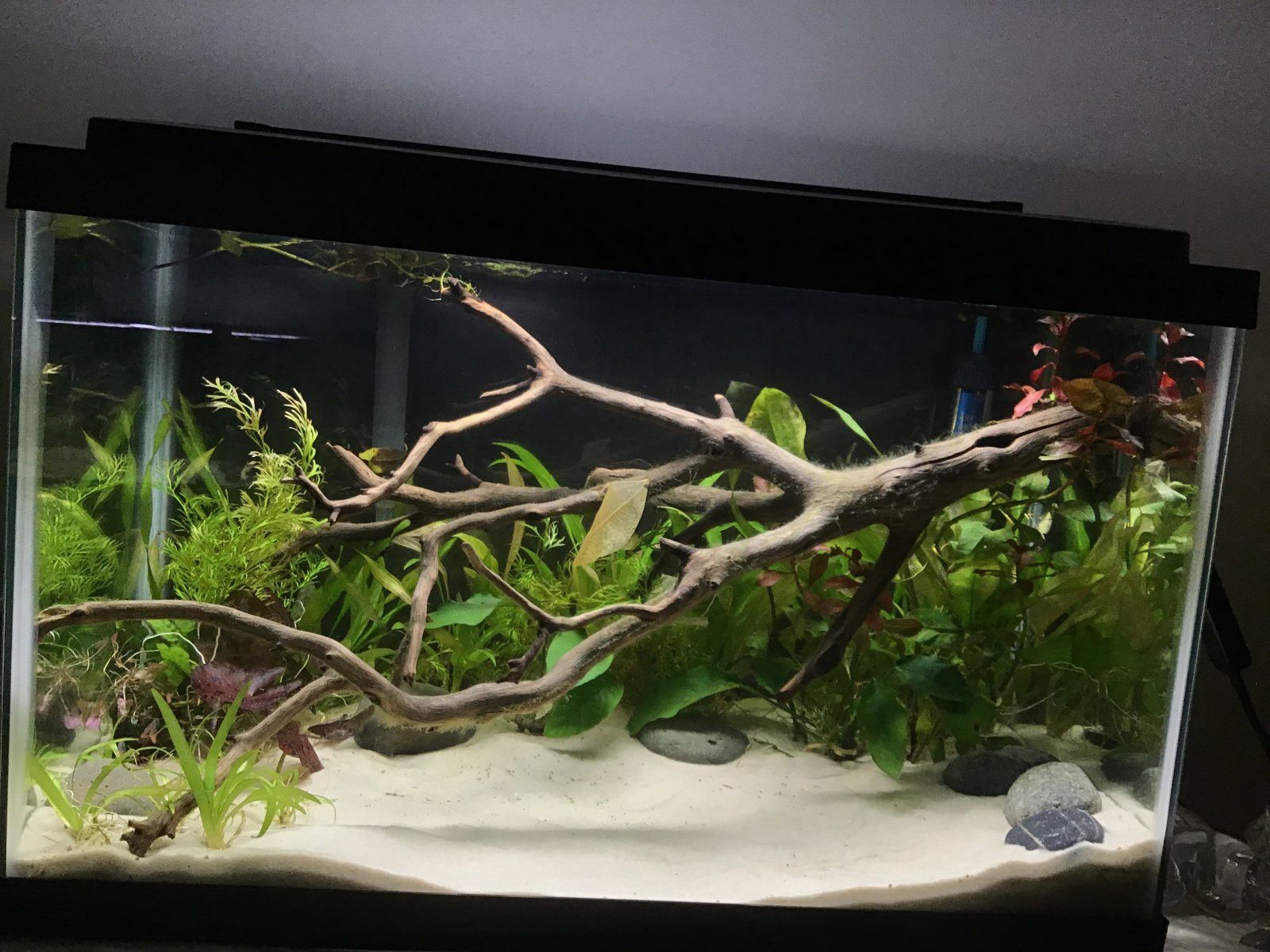 Hi! This is my 10 gallon planted Cory tank!
This is a standard 10 gallon and running with an AquaClear 20 filter, Nicrew SkyLed Plus Planted Tank Light, and a heater keeping it between 76 and 78 (Fahrenheit).

It is stocked with 3 Cory Hastatus, 4 Pygmy Cories, about 2 dozen Cory fry, and who knows how many Cory eggs in the plants!

I feed Shrimp Pellets, Tropical Flakes, and Frozen Brine Shrimp/Mysis/Daphnia. The tank gets dosed with Flourish at water changes, and the plants have Flourish root tabs. This tank has been running about 8 months I believe! 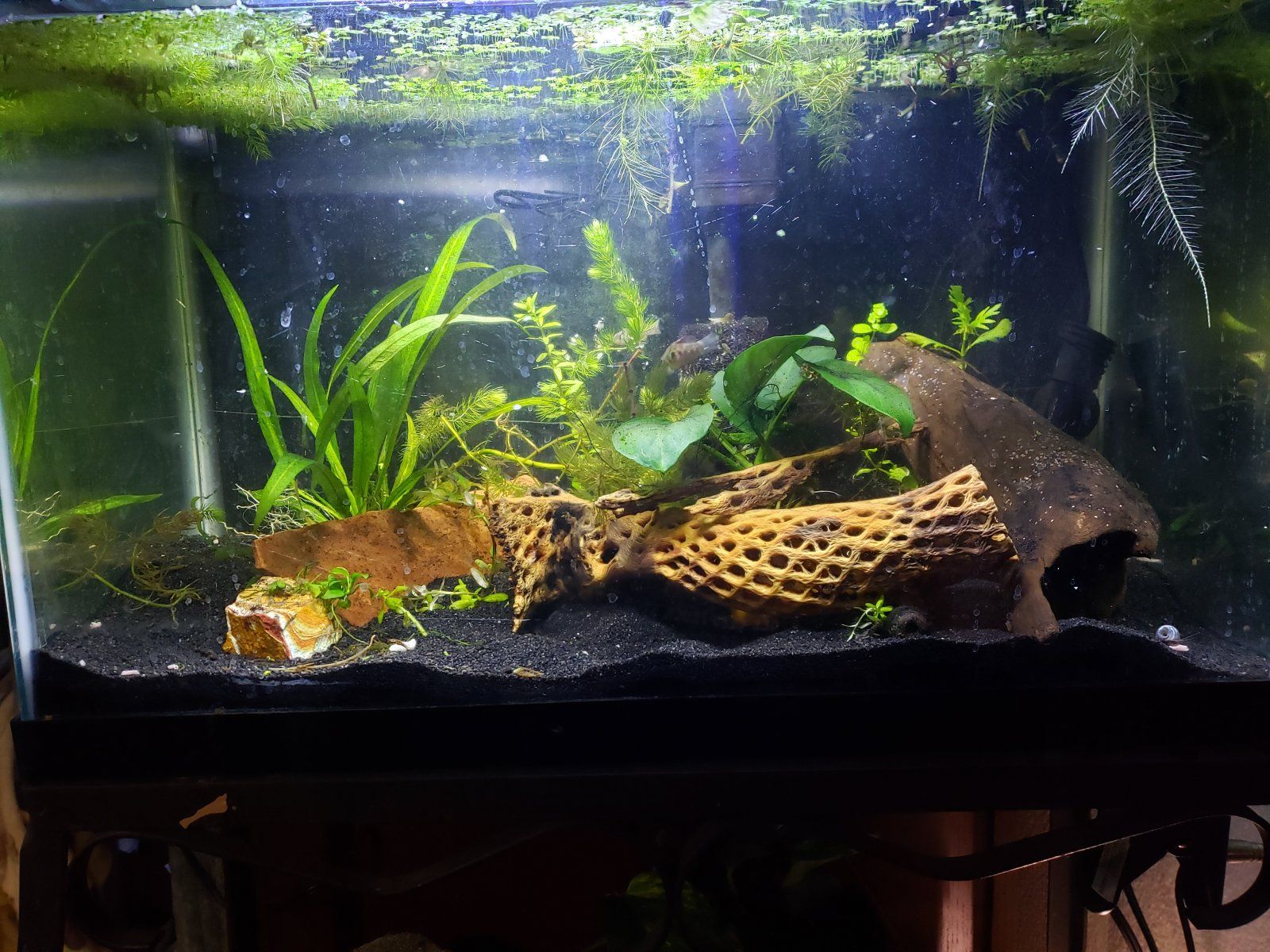 This is my 10 gallon Florida Flagfish tank. I currently have 1 male and 2 females, it can be hard to notice the females since they have a mottled olive green and pale coloration (can you spot all three?). I plan on adding 2 more females in the future. The only other occupants are a single Gold Inca Mystery snail (of my own breeding) and a blue ramshorn snail.
There is a large anubias Nana, and very small one, one amazon sword, hornwort, a small water sprite plant, a couple sprigs of bucopa, duckweed and water lettuce. I fertilize with Easy Green and Flourish once a week each. I have a small and hollow hardwood log as well as a piece of red slate, and two cholla wood pieces.
The light is an Aqueon Clip on, I run a Quietflow 10 with sponge and a pothos plant.
I started this tank in March of 2020, but rescaped it just a week and a half ago.
I feed frozen bloodworms and brine shrimp, bugbites color flake, bugbites spirulina flake, Sera spirulina tabs, and bugbites micro pellets.
Last edited by a moderator: Jun 4, 2021
K

This is an 8 gallon planted bowl that I set up this past January. It is home to 10 chili rasbora, 10 crystal red shrimp and a handful of red ramshorn snails. It has a dirt substrate capped with black gravel. In the center of the bowl is a large piece of driftwood to which anubias nana petite, bucephalandra and java fern are attached. Planted around the wood are:
limnophilla heterophylla
golden nesaea
mermaid weed
pogostemon octopus
ludwigia super red mini
Dwarf sagittaria
pearl weed
rotala h’ra

Parameters:
Temp: 75F
Ph: 6.8
Gh: 5
Kh: <1
Tds: 130
The fish get daily feedings of a varied diet. I alternate among bugbites, spirulina flakes, frozen daphnia and cyclops. In summer they also get live daphnia and mosquito larvae harvested from my yard. The shrimp get Bacter AE and Shrimp King pellets. The bowl gets a 10% water change every 2 weeks. I use R/O water remineralized with Salty Shrimp mineral Gh+. It has a very small sponge filter that gets cleaned every other month or so but the plants provide most of the filtration.
I fashioned a wooden stand which holds the bowl and the suspended Lominie P30 freshwater LED (30 watts 6500 K). The light is timer-set for 8 hours per day. I get very good plant growth so I trim every 2 weeks or so. During water changes I use half-pump of Thrive all in one fertilizer.
Last edited by a moderator: Jun 4, 2021
OP

End of entries:
Please slowly scroll up as you review the 9 entries and then cast your vote at the top of the thread. Thanks for participating in TFF’s Fish of the Month contest.

Starting in mid June, we will be accepting entries for our Fish of the Month contest. This month we will be featuring tetras. If you have a tetra species in your tank, please consider entering it in the contest.
OP

Less than one day left for voting. If you haven't yet voted, please vote now. Winner will be announced on Monday at 4PM ET [US].

Our Fish of the Month contest is now accepting entries. This month will feature tetras. If you have a tetra, we hope you will enter the contest.

:fish: What’s up fish peoples :fish: It's time for Fishforums bimonthly Fish of the Month Contest. This month we are featuring Tetras only. If you have Tetra in your household, we hope will enter one of them into the contest. Please note that if you won a previous FOTM contest, you must skip...
www.fishforums.net
OP

Flushable Pets has won TOTM for June. He will soon be awarded a banner and his tank will be added to our TOTM Wall of Fame!
If you want to congratulate him, head over to the winner's thread. https://www.fishforums.net/threads/...k-of-the-month-16-gallons-and-smaller.473028/