Fish of the Month

​
PLEASE VOTE!
We have 6 awesome Tetras entered into June's 2021 Fish of the Month Contest. View all the entries and descriptions below and then go to the top of page - click on your choice for FOTM and then click the "cast" button.

Please DO NOT post any comments about any specific entry in this thread...such posts will promptly be deleted. Preferably no posts should be made in this voting topic. This is a public poll so source of votes are viewable. You are allowed to change your vote if you wish.

Good luck to our entrants in the Fish of the Month contest. We at fishforums.net thank you for your participation.
Last edited: Jun 20, 2021 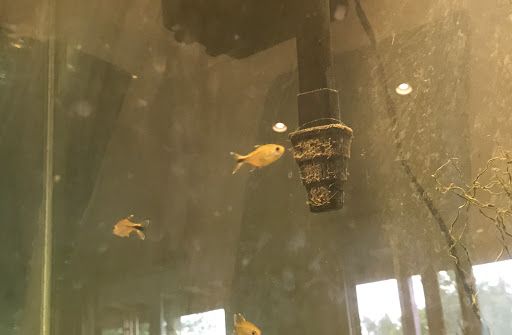 Lucky Charm, my Silvertip tetra
tank size: 47 gallons
tank mates: 9 other Silvertips, 3 bloodfins, and 5 dwarf gouramis
age: around 2 months
why I chose her name: she was nipped at by the bloodfins in till her tail was half gone, it healed back fast and she lived. she jumped out of the tank when she was in the 10 gallons and was found half dead, covered in dog hair, I put her in a small tank, and she lived and is thriving to this day, so she's my little lucky charm

traits: she's a survivor! she's a lot more speedy than the other fish in her tank, she can fight for herself now, she can scare away the other fishes if there chasing her, but she's such an angel at the same time!
food: she eats tropical flakes, betta pellets, and weekly bloodworms, she also nips at the alge wafer I put in for the snails
R

Fish of the Month!
Tank of the Year!

This is one of six Congo Tetras we have in our 50G.
Currently they share thier home with around 50 other fishes. Neons, Pristellas, Emperors, Rummynose, Harlequin rasboras, corys, Honey gouramis, Otos, SAE and a few others
They all get along well and shows no signs of aggression other than a few playful chasing around.
These Congos are byfar has the biggest appetites and super fast eaters. I have to feed using a pippette and feed in different areas so everyone can get thier fill.
Frozen or dry foods are fed once daily.
Hoping to upgrade to a bigger tank someday. Just still researching on how to do it since the bigger tank has to go in the same place as the existing.
Last edited by a moderator: Jun 16, 2021 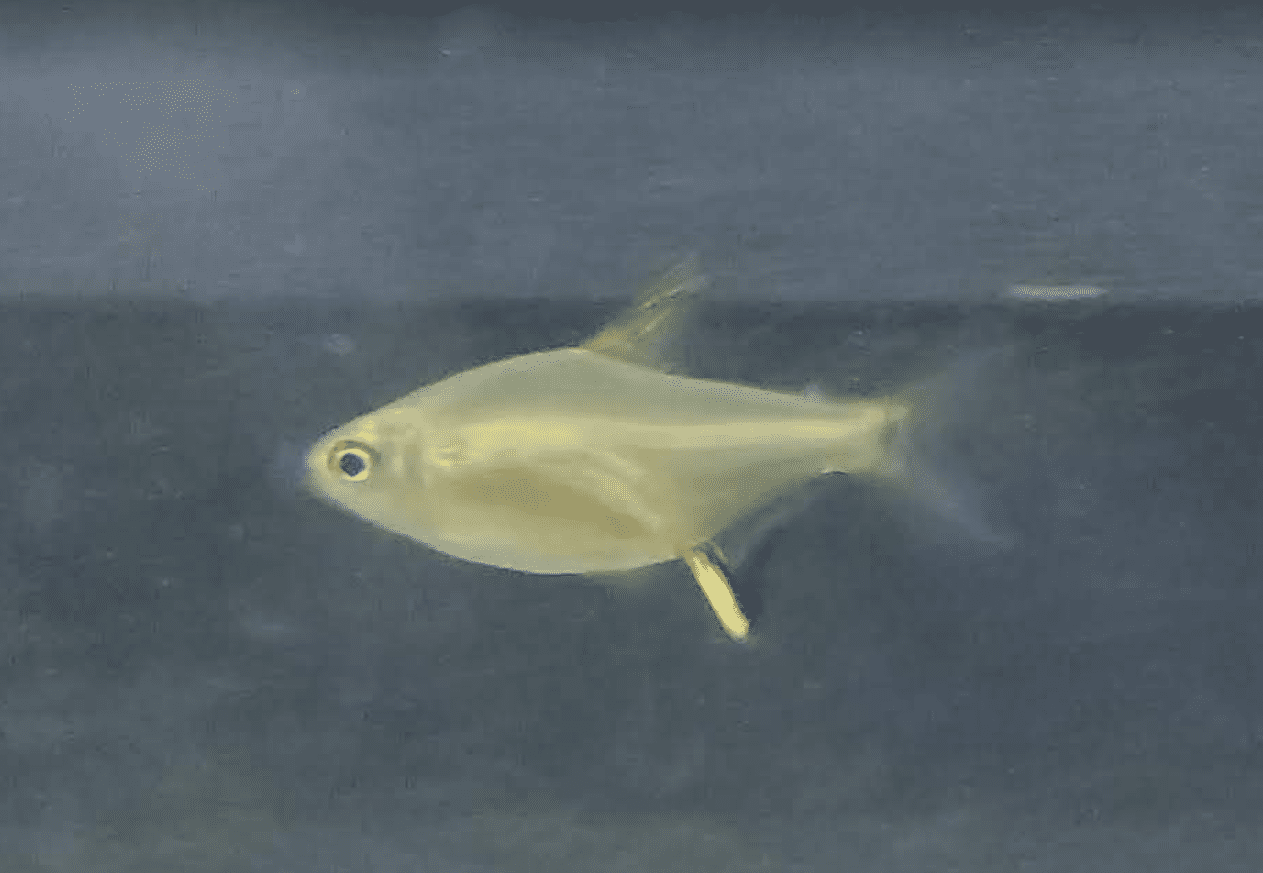 One of my lemon tetras, they are such boisterous eaters, especially in a smaller tank. I've had them for a year I believe. They're in the same tank with my angels so I call it the "Sweet & Sour Tank." Love these fish, I want to get more color on them, in time.
Last edited by a moderator: Jun 20, 2021 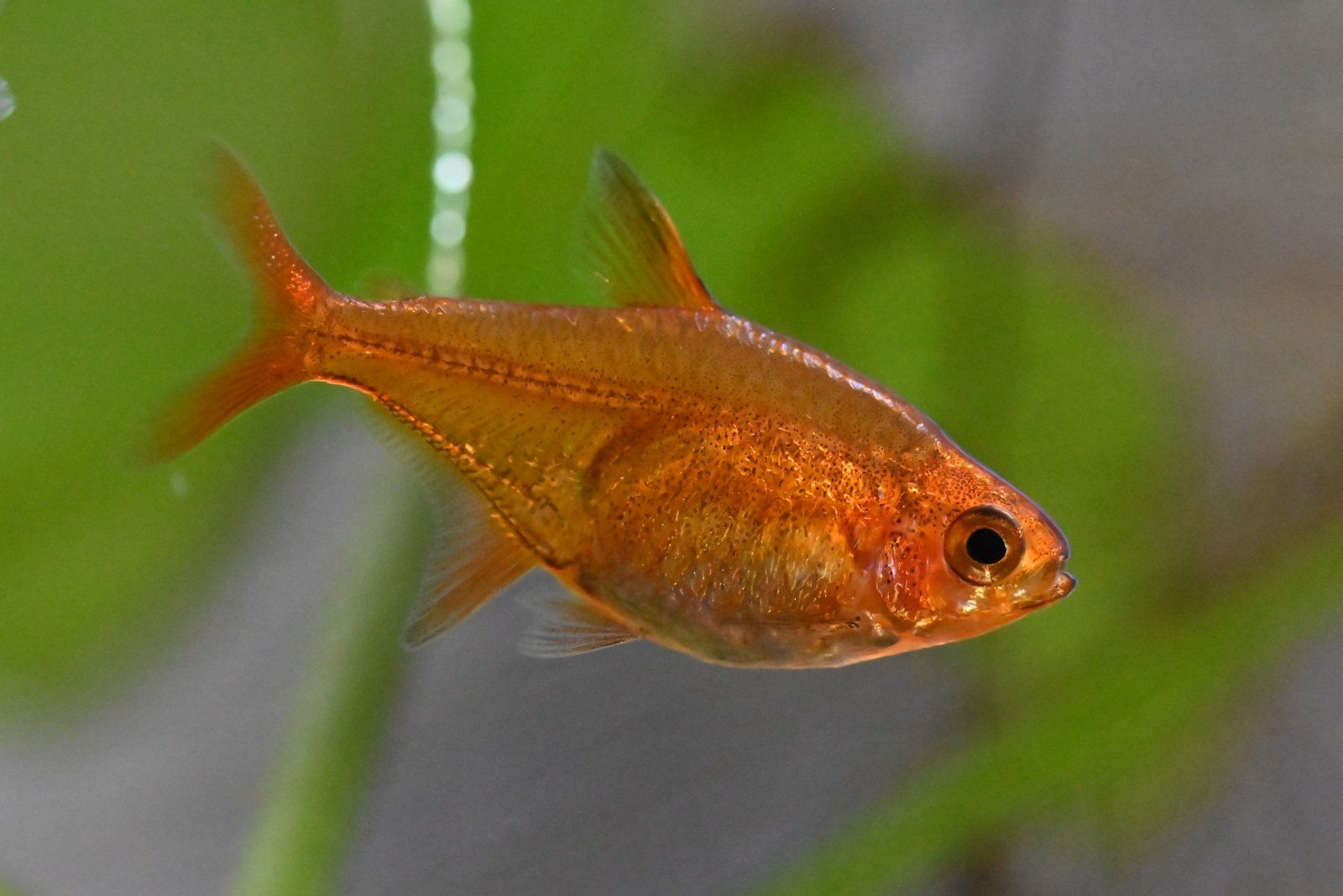 These guys have been in my care for about 4 months.
One of my 8 Embers. They don't have individual names, they are not spooky but also not super personable. They hang around the floaters and the weedier parts of the tank. These guys are my first fish in a 10 gallon aquarium and I would have to say it has been more of a challenge than the larger tanks. When I first got them they didn't have very much color but that has improved quite a bit lately. For their size they are pretty hearty eaters. The spend a lot of their time in the full current from the filter. They get feed flakes, frozen daphia, cut up blood worms, and cut up brine shrimp. Lately they have also been getting fresh nauplii because I have a batch of baby angels growing that I have to feed. They are quite pretty in a group against the light green plants, they also sparkle in the hour of sun they get each morning.

They are sharing their tank with a single blue diamond shrimp, the rest died in quarantine, and a single juvenile angel that is now twice their size, right now they get along just fine.
Last edited by a moderator: Jun 20, 2021
K 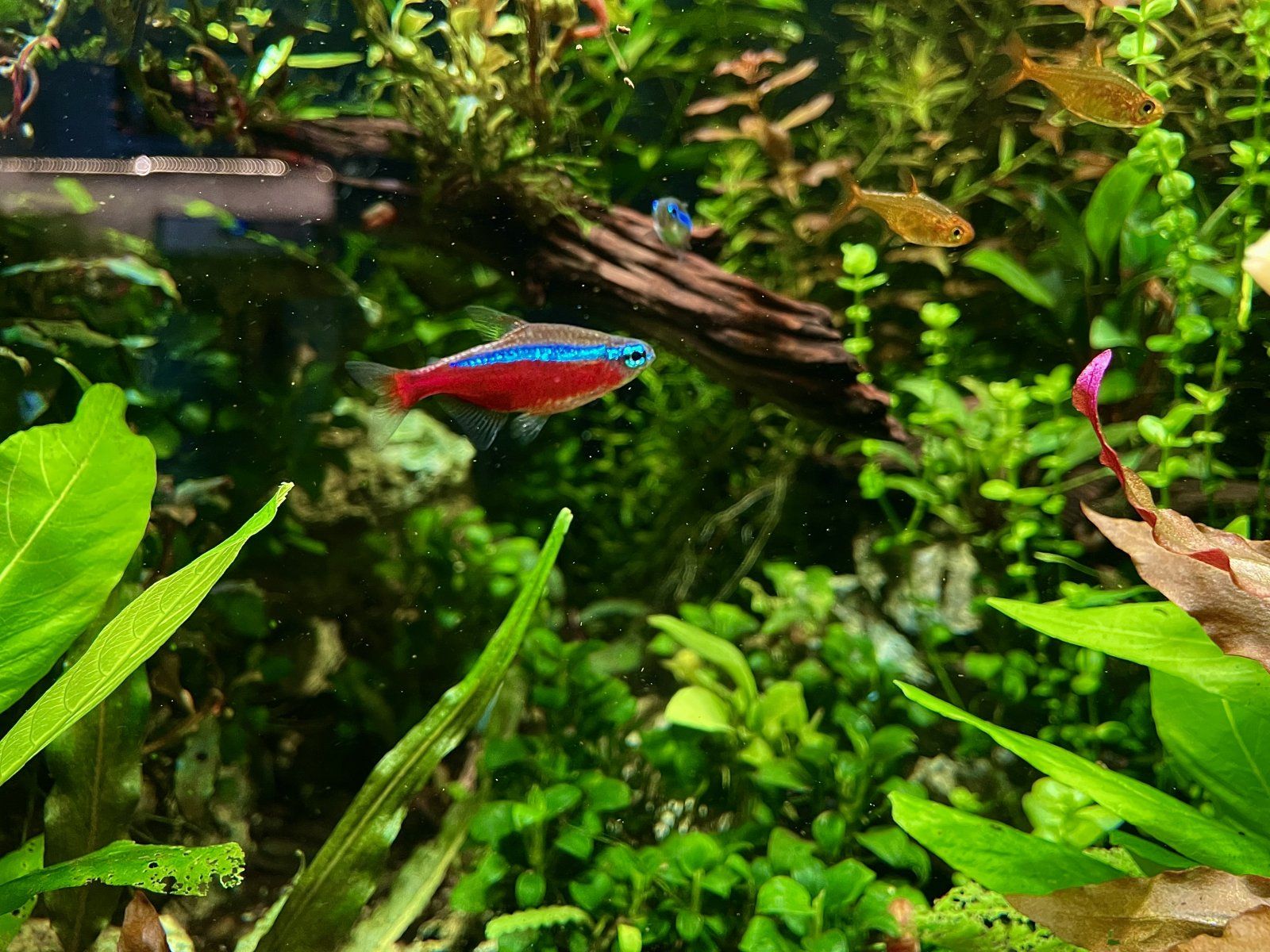 A dozen tiny green neons were the first school of fish to be introduced to my 75 gallon tank when I set it up over 4 and a half years ago. From the start one of the 12 had more pronounced red under its blue stripe so I called her Ruby. After a few months it became evident that Ruby wasn’t a green neon but a cardinal tetra. She is the lone cardinal in my tank but she schools with 30 green neons and probably thinks she’s one of them. She also shares the tank with a half dozen ember tetras, black schultzei cories, zebra otos, 3 german blue rams and 3 macmasteri apistos. She and her green neon mates are not fussy about food and will ravenously devour anything I give them. They resemble piranha in a food frenzy. Every so often I think about getting more cardinals but somehow I think Ruby enjoys being the flashiest tetra of the group.
Last edited by a moderator: Jun 20, 2021
J 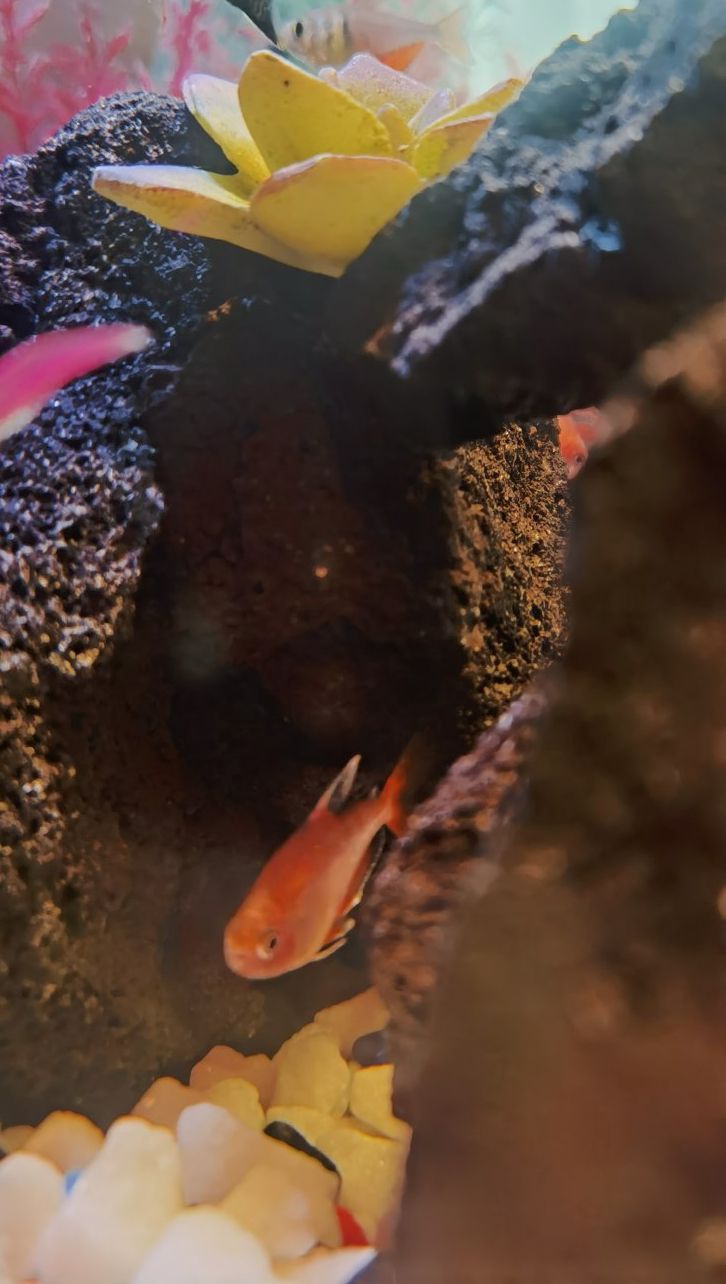 This is Latifa (after Queen Latifa), Cave Security. She stays between the rocks guarding her territory. She shares the tank with 5 other Sertae Tetra, flame tetras, mollies, amarno shrimps and bristle nose plecoes. They are fed frozen food once a day and all get along great... As long the others have permission to pass through her Cave

. This is my first tank so it's been a learning experience. A lot of reading (esp this forum) and a lot of searching to find good YouTube content. I've had Latifa and other tetra since mid Feb.
Last edited by a moderator: Jun 20, 2021
OP

End of entries:
Please slowly scroll up as you review the 6 entries. Then cast your vote in the poll at the top of this thread. Thanks to everyone who participated in June 2021 Fish of the Month Contest.

Next up will be our Tank of the Month contest. For July, we will feature tanks sized at 17 to 30 gallons. If you have a tank of that size, we hope you will enter the contest. Remember: it's not whether you win or lose that is important - what's important is that you participate in the contests.
OP

36 votes cast so far. Keep those vote coming. Vote Now!
Next up will be our Tank of the Month contest starting on June 30th. This contest will be for tanks sized at 17 to 30 gallons. If you have a tank of that size, consider entering the contest.
OP

Last chance for you to cast your vote in this FOTM contest. Winner will be announced tomorrow afternoon.

Our Tank of the Month is now accepting entries for tanks sized at 17 to 30 gallons. If you have a tank of that size, we hope you enter your tank.

Tank of the Month :big_boss: Please enter now! Ladies and Gents, Boys and Girls, all our fish lovers around the world. It's time for our monthly Tank of the Month Contest! This month we are allowing only freshwater aquariums sized at 17 (64 litres) to 30 gallons (114 Litres) to be entered in...
www.fishforums.net
OP

We have a winner. Razzmataz has won FOTM with his beautiful Congo Tetra. Head over to the Winner's thread if you would like to congratulate him.

We have a winner in Fishforums.net June 2021 Fish of the Month Contest We had 6 beautiful Tetras entered in this month's FOTM contest but only one could win... And the winner is....... :band: :hooray: Razzmatazz Let's all congratulate him :drinks: Here's the winning Tetra and its description...
www.fishforums.net

Another bizarre U.K. tank on eBay…(btw it’s not mine mods).

L
what should happen next...

My brine shrimp haven't hatched, why?

I
Another use for Juwel internal filter housing