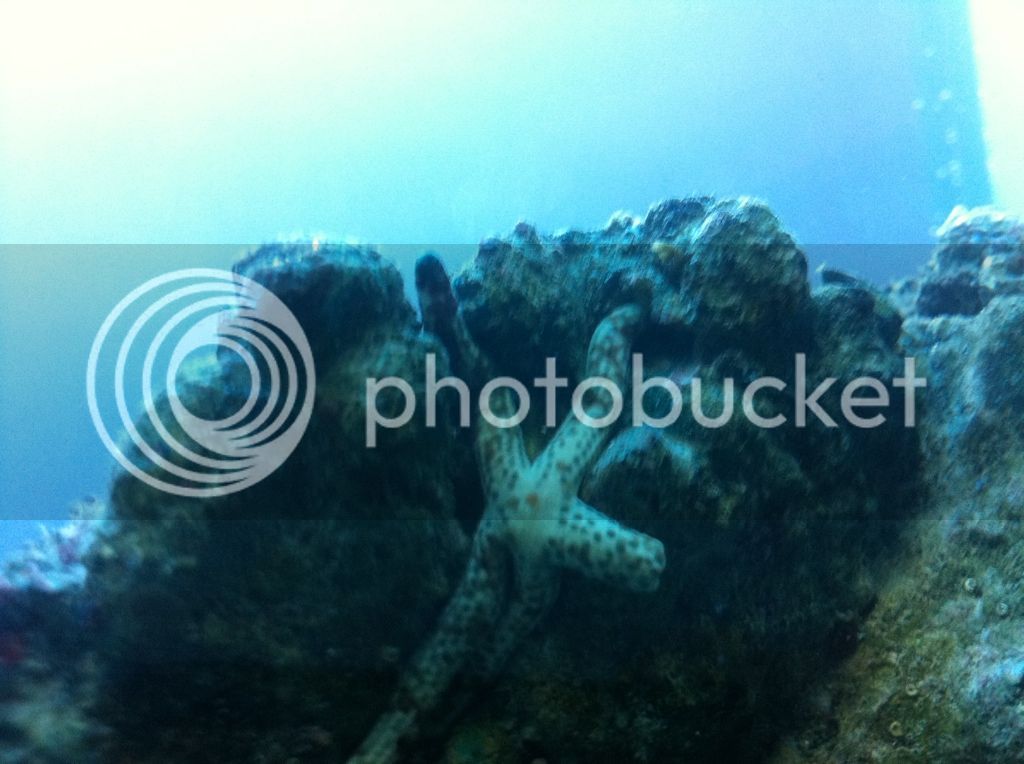 Closest i can find...

Looks similar but hard to tell with the actinic lighting, can you photo it under just whites?
OP

Aquascaper said:
Looks similar but hard to tell with the actinic lighting, can you photo it under just whites?
Click to expand...

Yeah I know its not the best picture, Ill try and get a better one tonight..

Its definitely a Linckia, in case its good.

Whoa! That's one unusual hitchhiker. Unfortunately I would not be too excited though, as it may not survive. Starfish like this are very fragile and often have dietary requirements that can't be fulfilled easily, particularly in a new tank, and they also don't handle extreme changes in their environment well. Signs of the damage don't usually show up for some time though.

Linckia is one possibility but there are other stars that are similarly shaped/textured/etc. Leiaster and Tamaria are two genera with similar-looking animals. Unfortunately I don't know what exactly distinguishes the genera and it looks like some Tamaria may be incorrectly sold under the Linckia name. So, as far as I can tell, it could be a Linckia multiflora but I'm also wondering about some Tamaria like T. megaloplax. There is a very similar-looking picture IDed as T. megaloplax on page 259 of "The Modern Coral Reef Aquarium" volume 4. There is also a similar-looking pictured under Linckia multiflora on page 275 of the same book.

Forgot something: if you don't think the tank will support it for diet reasons, I would actually recommend NOT zipping it off to a LFS straight away. The reason is just that the conditions LR is subjected to in transport (sudden changes in water, lots of air exposure, etc.) is bad enough for these kinds of stars that I would worry a second move in too short a time frame could easily do more harm than good. If it is still ok in a couple of weeks and moving around well, then it would be worth finding someone who with a large, well-established tank to re-home it. If your tank was mature I would say absolutely keep it, but this star is almost certainly of the "film feeding" variety, which means it is incredibly likely to perish after a few months in even a pretty large new tank.
OP

Thanks
The tank is newly set up, the live rock is well matured, been at the lfs for 6 months if that makes any difference. The rock was out of water for around 30 minutes from the journey from the lfs. From researching it looks to me like a multifora but what do I know haha.
Oh and the tank is 260 litres
OP

Also is there anything I could try feeding it??

Unless your LFS has one super-duper curing tub then the time spent at the store doesn't really help it become mature. If anything it can actually make it get worse over time if it comes in good and then is deprived of high light and such. I do know of one shop though with an outstanding LR bin where the rock that comes out is better than what's in most people's mature tanks, so it happens, but the rock from a system like that doesn't look like the rock in the picture. If that's what most of the rock looks like, then it's pretty devoid of a lot of the microfauna that these stars feed on. There will be some, just very unlikely to be enough to keep the star going long-term.

You can try putting various foods near the star, but odds are it will ignore them. It's worth trying though; you could get lucky. I recently saw a "sand-sifting" star eat a prawn (and...guess what, they don't sift when happy LOL but they do clean the sand surface at least). The diets of film-feeders are very poorly understood for the most part. For example, there are some Echinasters that were thought to be film feeders until recently when a gut content study showed they're eating plankton somehow in the wild. So...when I say the diets are poorly understood on these critters, it's REALLY poorly understood!

I remember 'back in the day' when a sand sifting starfish was part of most people's new tank CUC.....shocking really, same as the blue linckia craze.
OP

Winner!...Fishforums January 2020 Pet of the Month

Found a shrimp on my daughters floor!??