I have just become the happy owner of five CW045s. As you can imagine, it gets cumbersome saying things like, "The CW045s are swimming with the false juliis." Am I referring to a tax form or a Star Wars robot? They could really do with a name. Just a Latin one is fine. I don't mind calling my apistos (in a different tank) by their Latin names.

As I vaguely understand it, they are an 'undescribed' species of corydoras, which means no one has formally described them in a peer reviewed scientific paper. While they are a rare species in the aquarium trade, Google and Facebook reveal plenty swimming around in the US and UK, albeit the shops which stock them seem few and far between. Still, it's not an animal that's particularly difficult to locate. I found some in a fish shop, hidden in the corner of an industrial estate in Motherwell. It entailed an expedition into the jungles of North Lanarkshire, one of Glasgow's bleak post-industrial suburbs that never recovered from the collapse of manufacturing. Not quite Myanmar, or Brazil.

How do corys (and plecos for that matter) lose their C or L numbers and get Latin names? Does an icthylogist or taxonomist who needs a paper published in a journal set out to describe a particular fish? Are there simply so many corys and plecos that people haven't bothered? I just finished a book which delved into some spectacularly messy science politics surrounding the rush to be the first to describe a potentially new species of arowana. Corys plainly don't get the same kind of attention (but nobody's buying them for six figures, either, so....). One need not venture into the deepest, darkest Amazon tributaries or pay off gangs and drug dealers for safe passage in order to describe CW045. I have five in my tank. Anyone want to be published?
Last edited: Feb 23, 2020

Does sound like Star Wars ; Darth Vader and his terrible robot CW045s

Not sure about Corries but I believe there is an expedition planned to search for new tetra species in the Kelvin in the next few months.

Corries are my favourite fish. I'm lucky that in Dundee my local LFS usually has at least 12 different types at any one time.

is C for Corydoras?
is L for Loricaridae?

The problem is not enough Ichthyologists (people who identify and classify fish) specialising in the catfish family, and new catfish coming out of South America on a regular basis.

Basically there are Icthyologists that specialise in identifying catfish but there aren't many of them. So they work their butts off counting scales (not easy to do on scaleless fishes like catfish), fin rays, teeth and measuring the height and length of any specimens they get, then they collate the information, put it in a booklet and publish it.
OP

Those Kelvin tetras will have evolved to survive on Buckfast and rusting shopping trolleys, no doubt.

There's probably no money in catfish, unlike arowanas.

The wee fish shop in Motherwell are cory enthusiasts and had quite a few species of corys I'd never seen. I'd gone in looking for some gold laser corys I'd seen on their Facebook page, but alas, some guy beat me to it and had bought the lasers the previous day. They pointed out these guys and a few others, and I was quite drawn to these.

This is the best photo I managed to get. They're pretty wary of us and run into the plants when we approach the tank. They haven't had the best experience of humans -- captured in the Amazon, shipped to the UK, quarantined, moved to a display tank, captured again and bagged. I'm sure they'll be more sociable and photogenic once they settle and learn we are the providers of food. Our tank isn't the Amazon, but it will have to do. 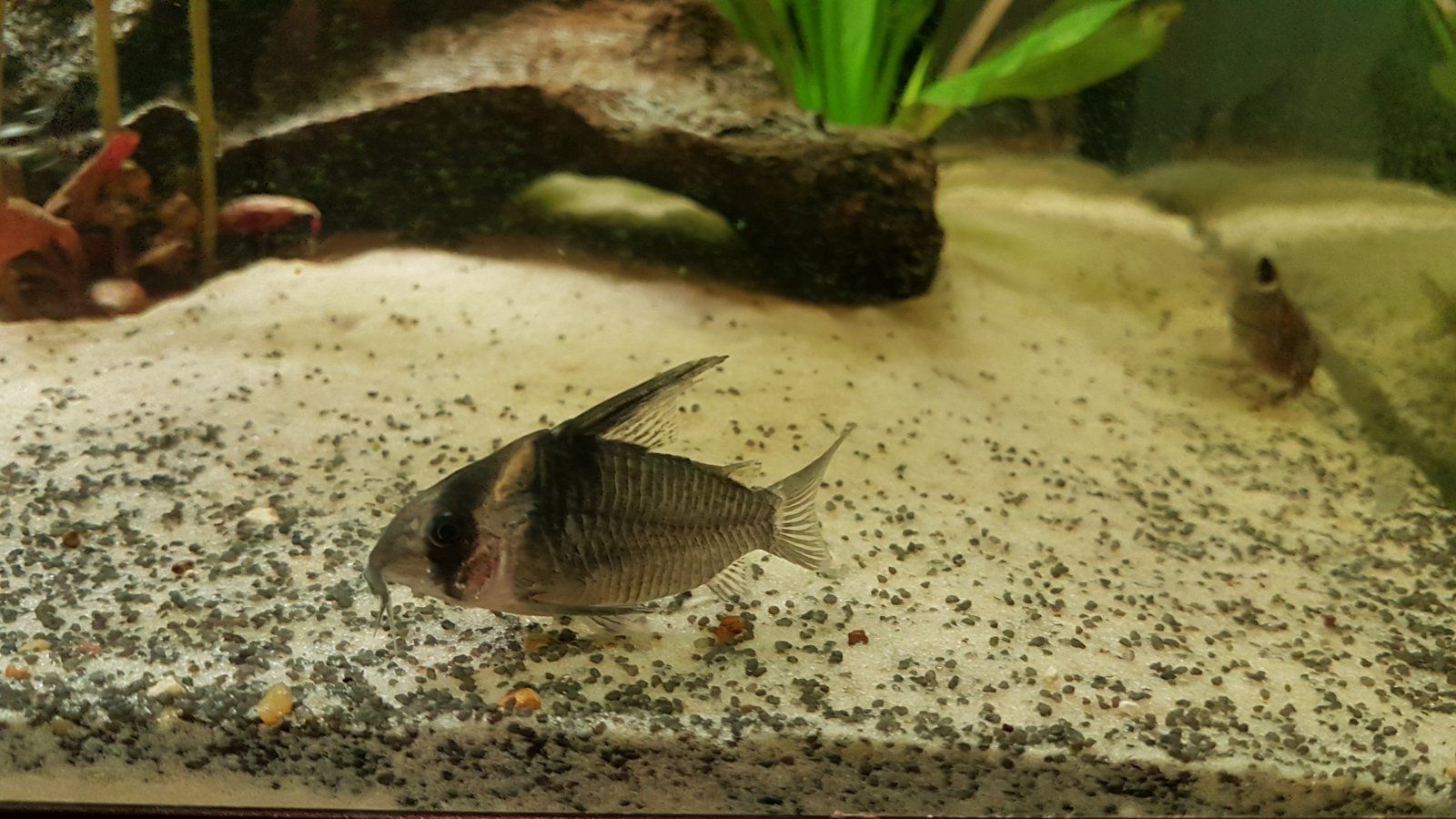 These look like Virginiae corries, but with a shorter body. Nice pic.
OP

Aye, those markings are close indeed. The dorsal fin on the CW045s is a lot longer and pointier.

They occasionally shoal with the false julii corys, but haven't shown any interest in the black corys. Similar body shapes?

I think CW stands for Corydoras World. That seems to be the main hub of corydoras knowledge and research, but one needs to be a paid member to access most of their papers and information. Looks really interesting, but I might be too cheap and not geeky enough, yet. On the other hand, who can resist "Cory-Fest?"

You've raised a subject near and dear to me.

First, a summary of the name aspect. A binomial nomenclature system is used to name all life, botanical and zoological; simply put, “nomenclature” means the names along with the system used to assign those names, and “binomial” means two names. These two are the genus (plural genera) and the species (or specific epithet). This system was developed by a Swedish botanist, zoologist and physician named Carl Linnaeus who lived from 1707-1778. In 1735, Linnaeus published his Systema naturae per regna tria naturae, secundum classes, ordines, genera, species, cum characteribus, differentiis, synonymis, locis; in translation, “System of nature through the three kingdoms of nature, according to classes, orders, genera and species, with [generic] characters, [specific] differences, synonyms, places.” Usually referred to as simply Systema naturae, by the thirteenth edition in 1767 it had become a monumental classification of all then-known species of life on earth. The system further developed into modern Linnaean taxonomy, the hierarchically-organized biological classification that is today used to classify all species of animals and plants. Strict rules govern this system, established and enforced by the International Code of Zoological Nomenclature [ICZN].

Anyone may describe a new species and name it, but this is almost always the work of trained scientists with experience as ichthyologists because it today involves a thorough analysis of the fish internally as well as externally, and usually DNA analysis is included. The name must not be one that has already been used for any species in the same genus, and it cannot be the name of the person doing the naming. The first published name assigned to a new species has priority and remains the valid name with respect to the species; any subsequent species name given to the same species is invalid and may be termed a synonym once it is determined to be the same species. The species epithet can only change under a few very strictly-enforced rules of the ICZN. The genus may change, sometimes many times, as the result of new scientific study. The Serpae Tetra for instance, Hyphessobrycon eques, has been assigned to five different genera since it was first described in 1882 by Steindachner as Cheirodon eques, but the species name “eques” never changes. The value of this binomial nomenclature system is certainty and clarity.

Fishbase lists at present 163 valid species in the genus Corydoras. There are dozens of fish presumed to be Corydoras that have been collected but not yet described (named). The large number led to the introduction of the "C" number system, following the earlier "L" system for new loricariids. Hans-Georg Evers on the staff of DATZ periodical developed the "C" system but it was discontinued, and in 2006 Ian Fuller, a close colleague of Evers and owner of Corydoras World, initiated the CW numbering system. There are 159 "C" number "species" and 162 "CW" number "species" listed with photos. Given the similarities externally of many of these, they may or may not all be distinct species; only scientific analysis of specimens from each collection group will determine this.

There are presently 465 "species" listed in CorydorasWorld which includes the described distinct species and the numbered undescribed "species."

Taking this one step further...the genus Corydoras is polyphyletic; "polyphyletic" means that there are species within the present genus Corydoras that are not descended from the same ancestor. By contrast, a monophyletic genus is one that holds all species that are known to have descended from the same (common) ancestor. Phylogenetic analysis has shown nine distinct lineages within the genus. Ian Fuller lists the lineages with all described species and all assumed (from external references only since none have yet been disected to determine the DNA and internal structure differences) "C" and "CW" "species" included. Several cladistic analyses have confirmed these lineages as being distinct, which means that once all this is sorted out there will be nine genera of Corydoras-type species. Until the last decade, there were three genera in the Corydoradinae family, Aspidoras, Brochis, and Corydoras. Britto (2003) resurrected Scleromystax with the species S. barbatus [previously Corydoras barbatus] as the type species, and this genus today holds five distinct species. Earlier this year Luiz Tencatt released his PhD dissertation which is the first major analysis on the Aspidoras species in over three decades, and once published (due shortly) this will revise the genus and move one species (A. pauciradiatus) to Corydoras in order to keep Aspidoras monophyletic. Brochis was made synonymous with Corydoras (Britto, 2003) and the three "Brochis" species are now considered in Corydoras. One of the nine lineages will eventually include these three species along with the two others already in Corydoras that are now known to have descended from the same ancestor, and Brochis is the oldest name assigned to the species so it wins.
Last edited: Feb 24, 2020
OP

So, in other words, for a fish to be named, someone has to look at its external characteristics, dissect it, test its DNA, and then get a paper published....where? In an icthyological journal? Or does the ICZN have its own publications? If a fish is undescribed, it means no one has got around to doing that? With all the undescribed species of loricariids and corydoras, this looks like shooting fish in a barrel (sorry) for PhD students desperate for publications. It seems surprising that so many fish which are known in the aquarium trade remain undescribed. If one wanted to describe CW045, one could find them easy enough.
You must log in or register to reply here.
Share:
Facebook Reddit Pinterest Tumblr WhatsApp Email Link

Yesterday at 11:16 AM
Fishmanic

K
Fish dieing every other day