So I have a 40l tank that has been running for 10 months, housed a betta which sadly passed away 3 months back (though was 3 years old), and I let it overgrow w algae and plants. I placed 20 cherry shrimp in it 2 months ago, and am wondering when to expect any berried females.

I heard they reach maturity in like 3 months of age, right?

I am also a bit worried about the numbers, I placed in 20 CP shrimp and 2 amano shrimp, I could, in the begging, count around 15 at least, but lately all I can count is 10 CP and 2 amano. And out of the 10, only two are female. It is possible they are just hiding, it is very dense, and I have not seen any dead bodies, and I keep seeing molts, so hopefully all is ok. When should I start to investigate or be worried?

I have so far fed only once a squirt of frozen cyclops, and I do a monthly water exchange, but not too much (though I add fresh water if the surface level calls for it). Temp of the tank is at 23°C at this very moment, but it is no heater, so it fluctuates. I read about the impact of water temp on the female to male ratio, and am hoping, if they finally breed, they will go with more females, to get a population boom going, and over winter, when the temp drops, they may take a break . Do you think it will work like that?

There are no fish in there, and there are not planned at all, I like low maintenance shrimp only tank. I just havent kept shrimp in a while and am not sure what to expect anymore. Thanks

I have a shrimp tank with red cherry shrimps and I can't stop mine breeding. At every water change I have to rescue newly hatched shrimps from the bucket.
Some differences in the way I keep my shrimps compared to what you have said, (though I too keep mine at 23 deg ) -

I clean my tank once a week (you said once a month)
I feed mine very day (you said only once a squirt of cyclops) I feed mine this, which was recommended by Avel1896 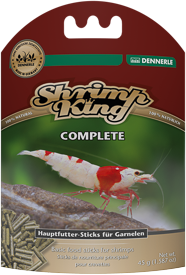 Do you have any live plants in the tank?
OP
OP
B

So many, this is an older pic I took, it is even more filled with the egeria densa now. Also the riccia is prominent over 3/4 of the surface. I had the tank super algae, green, spotted, stones and stuff, so I dont need to feed except to add protein once in a while. Well in theory 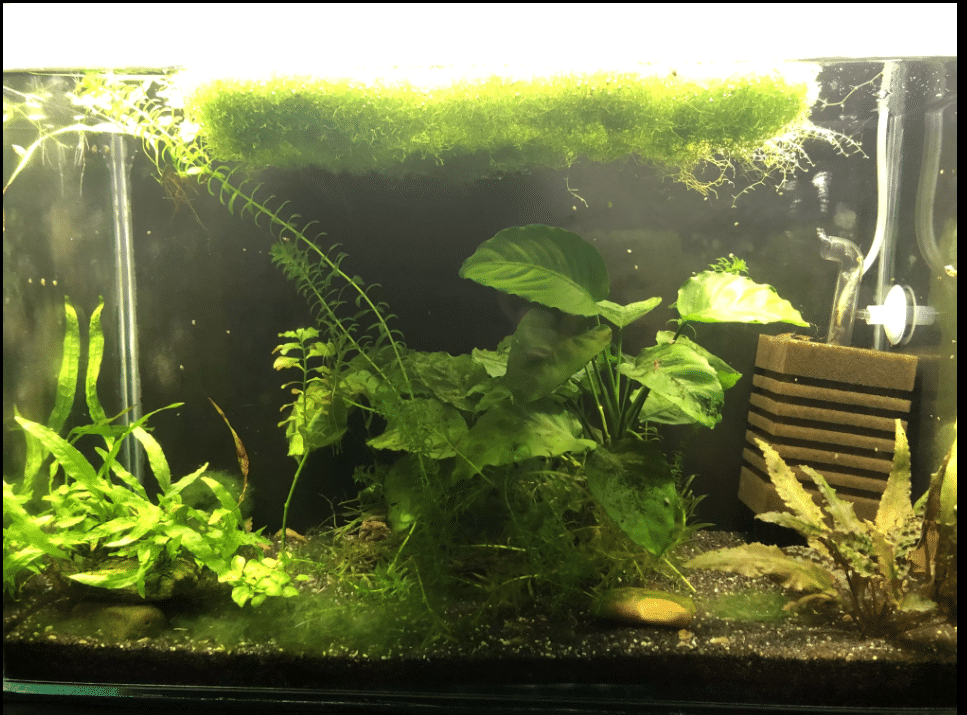 You already know that the amanos won't breed though, right? Just making sure since you mentioned adding them and the topic is breeding!

As for the cherry shrimp - it took months and a few attempts before I had success with seeing berried females and tiny shrimplets. I only started with small groups though. Temp also affects how rapidly they go through their lifecycle and reach maturity, before passing away. If the temp is low, it might be six months before a newly hatched shrimplet reaches maturity, at warmer temps, might take two months. Bear in mind that if the temp is warmer, while they mature faster, they also don't live as long as shrimp at cooler temps. It's all about their metabolism.
They're more likely to breed when they feel safe, and when there is plenty of food. While yours have plenty of algae, they're scavenger omnivores, and relish some protein! If a fish dies in my shrimp tank, it takes no time for it to be covered in shrimp, and they relish anything protein based dropped into the tank for the cories and plecos. Feeding protein only once in that time might have slowed things down, I'd look to add some complete shrimp food like the one @Essjay linked above at least 2-3 times per week to encourage them that it's okay to breed. Shrimp are so sensitive to scents in the water that they find food like that quickly, and if you feed it right at the front of the tank, you'll soon see them come out of hiding to eat it.

I also do more frequent water changes on my shrimp tank, like Essjay, but mine are kept with fish, so that has to happen in my tank really. But I'm placing my bet on the lack of food variety being the main reason you're not seeing breeding action yet.

I forgot to mention amanos. The females do carry eggs but they hatch to a planktonic larval stage which needs salt water to survive, so no baby amanos in a fresh water tanks.


Feeding the shrimps on food specially designed for them may well help. The food I have comes in small sticks and you add 5 mm per 20 shrimps. I crush mine slightly. If just one piece is put in the tank all the shrimps will try to reach it, but with several smaller bits they all get a chance.
OP
OP
B

I was aware of the amano not breeding, though they may carry just the larvae will not develop. I saw people here breeding them though but the salinity spec is really narrow, sounds so complicated. Just mentioned them to be sure to mention what i have in the tank if it has any effect. Heard a rumor amano and cherry may not work well though nothing too specific why this opinion.
I will buy some protein rich food and do a weekly feeding to spice their lives up.
Will even work to check the numbers.
Thanks for easing my concerns.

Beastije said:
I was aware of the amano not breeding, though they may carry just the larvae will not develop. I saw people here breeding them though but the salinity spec is really narrow, sounds so complicated. Just mentioned them to be sure to mention what i have in the tank if it has any effect. Heard a rumor amano and cherry may not work well though nothing too specific why this opinion.
I will buy some protein rich food and do a weekly feeding to spice their lives up.
Will even work to check the numbers.
Thanks for easing my concerns.
Click to expand...

I've kept a group of six amanos with my cherry shrimp colony for maybe a year now without problems
The only problem I could foresee is that amanos will grab food and take it away for themselves. Have seen them do that with algae discs. But if you're feeding a smaller scattering food like @Essjay said, then it shouldn't be a problem.

Lots of aquascapers also keep both neocaridina and amanos, wanting the benefits of both.

If you want shrimp to breed, they need food and lots of it. Shrimp have a high metabolism and need feeding every day if you want them to breed. I fed mine 2-3 times a day and they had eggs all the time. If you are only feeding once a month, there isn't enough food for them to want to breed, let alone develop good quality gametes.
OP
OP
B

Hi, so a month later, and I did feed a few times and did two water changes with cleanup. I also replaced the anubias plant with a large clump of java moss, which should be more appreciated.
I still have never seen any babies, but saw one or two females carrying. I also sadly discovered a dried out shrimp outside of my tank and I think I saw a dead shrimp in the tank last week. I thought I saw one dead yesterday too, but it left very quickly when I wanted to check it out.
I still see complete molts, so I hope there are no calcium issues, and since I dont see any sudden massive deaths, I am hoping all is ok. I do test No3 sometimes and it is always 0.

Now I have a new question. The bottom is full of detritus, because it is some tightly packed black "sand" and I did not sift through it i na while. Removing the anubias, that was rooted in the substrate, stirred up some amount which I removed with the past water change, I did the same again the next water change, but it is not clean clean. For me to clean it thoroughly though I would need to remove the water four times over at least.
So I was thinking, I have the brotia herculea snail, which is a detritus feeding snail. Would it be helpful to put it in this tank and hoping it will burrow and clean it out? I ofcourse have MTS snails in there but I see a lot of shells in the substrate and on it, but I see some MTS out on the glass too, so they are still alive. The shells have been there for a while, they dont have that much to eat and this substrate has been in this or other tank for years.
It can also happen the brotia will decide to eat the plants instead
OP
OP
B

So, at which size can you see shrimplets in a shrimp only tank? I noticed first eggs in June, saw one teeny tiny shrimp against a black background that hid immediately like a week ago and now nothing. Other females are carrying, the colony seems to be growing but at which size will they stop hiding ?

Do you mean amanos or cherry shrimp?

Cherry shrimp are big enough to see as soon as they've hatched, but mine are colourless for a while and almost impossible to spot by just looking in the tank. It's when they move I can see them.

Amanos hatch to microscopic larvae rather than miniature adults and the larvae need salt water and microscopic algae to feed on before they metamorphose into tiny shrimps.
OP
OP
B

Sorry meant cherry shrimp. I know they have hatched and i have seen one once but other than that i only see the adults. Is it like maybe when they reach 0,5 cm they stop hiding?
Otherwise i would worry they are not surviving.

I usually only see tiny babies when I empty the water change bucket with a jug. They are very hard to spot on sand and in java fern. But they don't take long to grow to 5 mm when they are much easier to see.
OP
OP
B

Found an article that says 21-30 days for eggs to hatch, a month for baby shrimp to stop hanging in the substrate, another month to become juvenile, four months after that to reach adulthood
So 6 months for them to be the size of the others. I have had them since April, i should be lucky they are even breeding and i see there other females carrying. By December i should have around 50 from the initial 20 I purchased

I've looked at my records.

When I first had shrimps about 10 years ago I couldn't keep them alive. The last shrimp was a berried female, so I put her in my quarantine tank. One morning I found the female dead and was about to put the tank away when I spotted something moving - baby shrimps. Those babies were the start of my shrimp colony.

So the babies born on 27 July had babies of their own 3 months later.
You must log in or register to reply here.

What's the last fish that you spawned?
2 3