🐠 August Fish of the Month Starts Now! Click to enter! 🏆

Origins: Various rivers in South America, especially in the Brazil. Unfortunatly, there have been many Red bellies introduced (and thriving) in warmer waters in Florida and other warm places by irresponsible owners.

Care: Red bellies are a remarkably hardy species. At least a 75 US gallon tank is needed to house red bellies. Despite their size, you can home up to 4 specimens in a single 75 gallon tank. Frequent water changes are neccesarry. These are a shoaling fish, so keep in groups of at least 4. Provide at least 20 gallons of water per fish. These guys are huge eaters, so awesome filtration is essential. Temperatures should be stable between 75 and 85 degrees. pH should remain between 6-7.5 though slightly acidic around 6.7 is best. Often inhabits peat stained waters, so the addition of peat or blackwater extract would not do any harm, but is not vitally important. Fast flowing waters replicate natural environment. Dim lighting is appreciated. Like most piranhas, requires high oxygen levels.

Feeding: Has a huge appetite. These guys are not picky eaters, though when first purchased, it may be difficult to switch from live foods. The majority of the diet (about half) should be fish. Live fish are preferred but frozen silversides or other frozen fish are readily accepted. Be sure that if live fish are being used that they must be quarantined for at least 2 weeks and look healthy and disease free before being offered as food. Supplement with other meaty foods like squid, earthworms, bloodworms, shrimp, and other similar food items. Not being picky eaters, they will readily accept carnivorus pellet/sticks.

Breeding: Breeding red-bellied piranhas has only been accomplished a couple of times in captivity. Though for the lucky few who have bred them succesfully, have found that they are quite prolific.

Comments: Two varieties exist, the "regular" red belly and the super redbelly. Normally, the only difference is that the belly of the super red is a much more vibrant rich red. Red bellies won't normally bite, but if you're not careful they can. Like most piranhas, this species can be skittish at times. By far the most common piranha, the red-belly can commonly be purchased at 1 inch in length. Its best to only house them with other red bellies.

This picture displays the "regular" variety of red belly 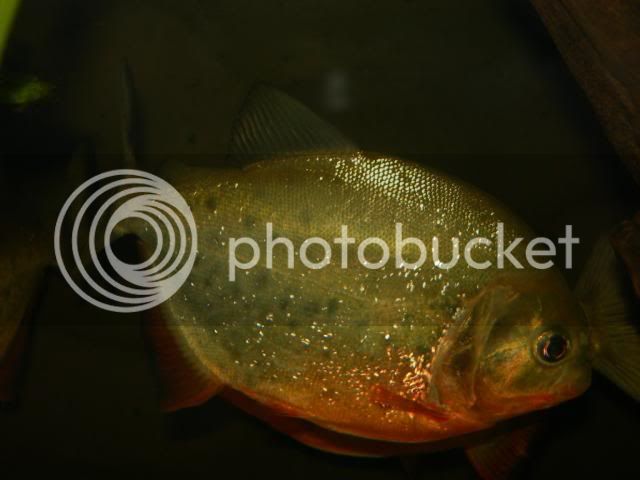 Says that they have only been bred in captivity a couple of times...I know many people whos red's have bred, plus they are bred in the thousands, thats why there are alot more tank bred reds than wild reds in the shops and the low price for them.