Bought these two new plants today, I am pretty sure the first is a crypt of some sort and the second a sword but just not sure what type, any help appreciated thank you 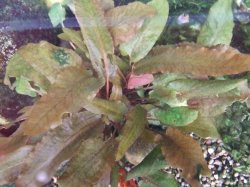 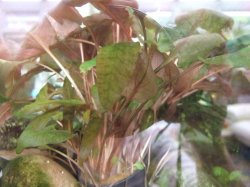 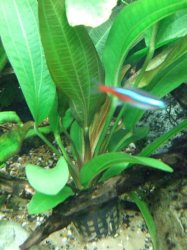 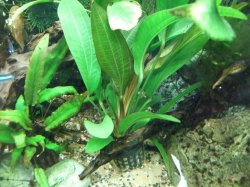 You are correct that the first two photos is a Cryptocoryne.  As to species, I have trouble with these as growing conditions can affect their appearance, but I would guess it may be C. becketti, but I will not insist if someone who has a better grasp of the genus says different.

You are also correct on the second plant being an Echinodorus (commonly, sword).  I don't think this is the more commonly seen E. grisebachii (which is a species that has several variants in appearance, including the two very common "amazonicus" and "bleheri") because of the more distinct veining, so it could be an "ocelot" variety.  One thing about swords is that they are usually cultivated emersed, with leaves that are different in texture and usually shape, from those emerging when planted submersed.  So you can expect the new leaves which will emerge from the centre of the crown to likely be different from those now on the plant.

Both these genera can only be definitely identified by the flowers, which in both genera are distinctive to each species.  Getting crypts to flower in the aquarium is very difficult, requiring emersed cultivation I believe.  Echinodorus sometimes flower submersed (I have had this twice in 20 years) but rarely unless they too are grown emersed.  Submersed reproduction by Echinodorus species is via inflorescences (flower stocks) which develop adventitious plants rather than flowers at each node.  Crypts in the aquarium reproduce vegetatively, via runners, once they are settled and happy.

Both these genera are marsh or bog plants, which can grow emersed in damp soil such as in the forest (Echinodorus) or along waterways (Echinodorus and crypts).  Echinodrus usually spend half the year emersed, when they flower, and half submersed (the wet or rainy season).  Fortunately for aquarists, most species in both genera will grow very well permanently submersed and thus they provide us with some of our finest aquarium plants.