Hey! It's been awhile since I posted on here. A lot has happened in the last month fish wise for me so I decided it'd be a good idea to share!

It all started back in early October. I had finally gotten my 55 and 20 set up and began cycling. By the end of November they were still not completely cycled. They finished in the second week of December. But I was not going to order fish during the holidays. Too much risk of the package getting delayed. But after a payment issue with a seller on aquabid I finally got 6 N. anomala at the end of January. 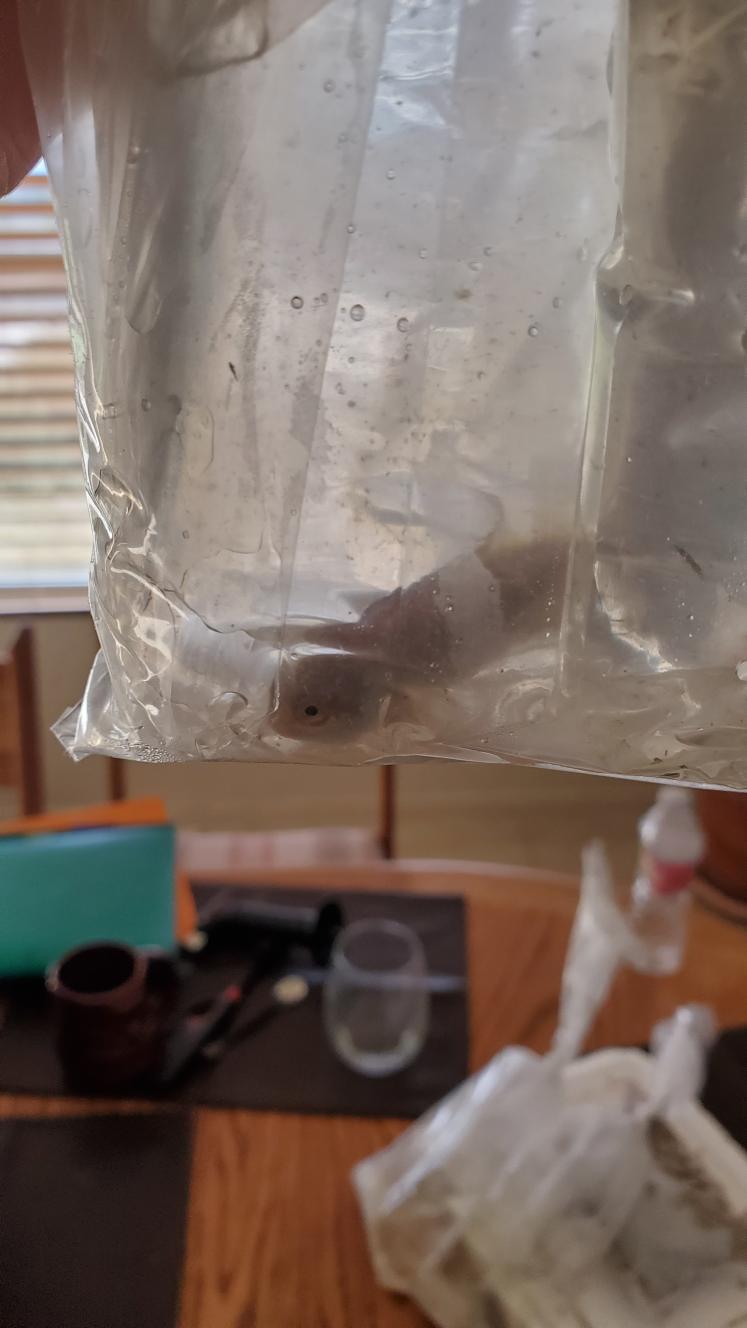 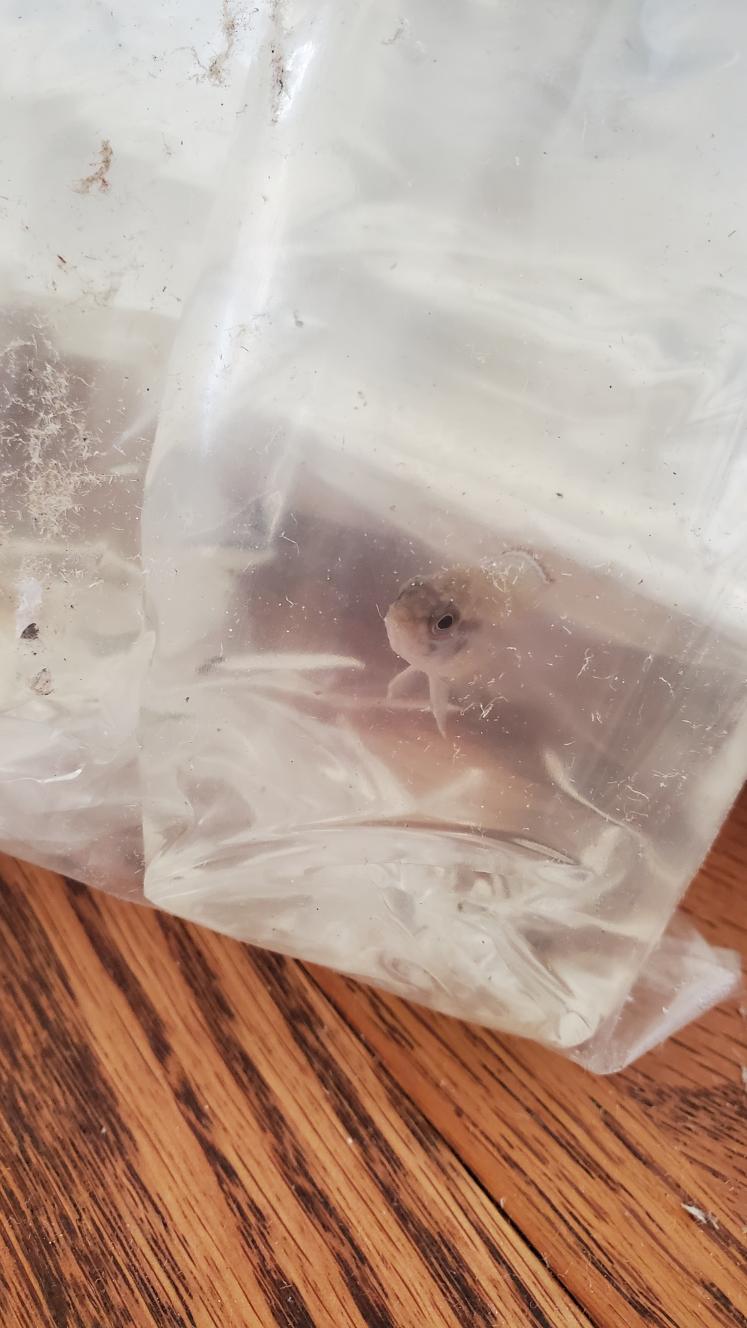 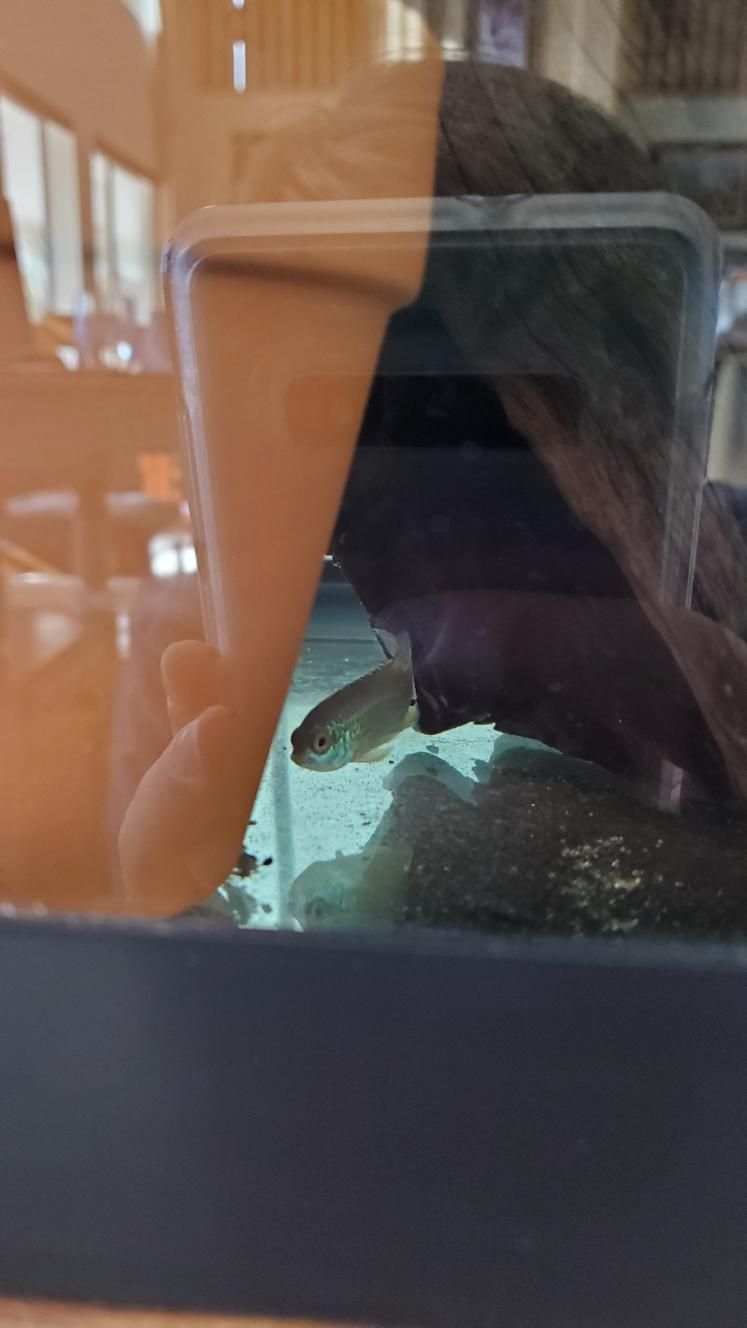 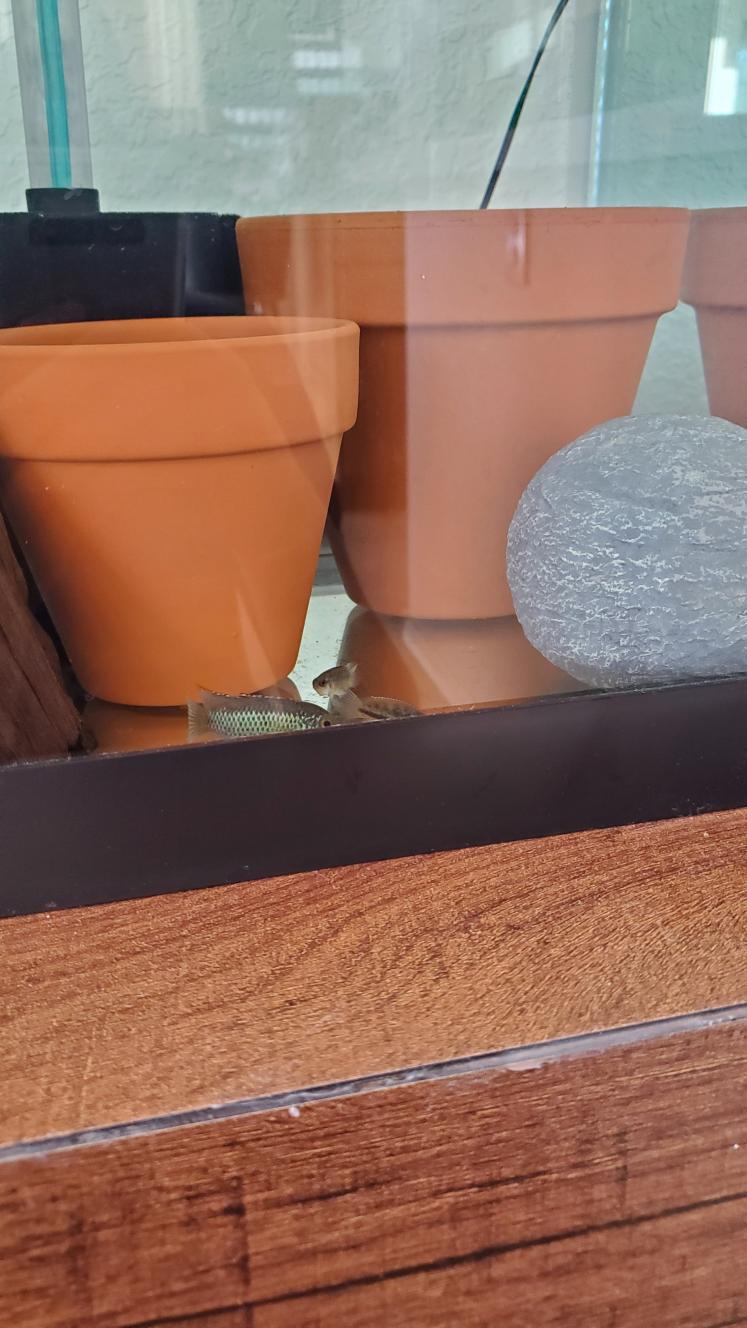 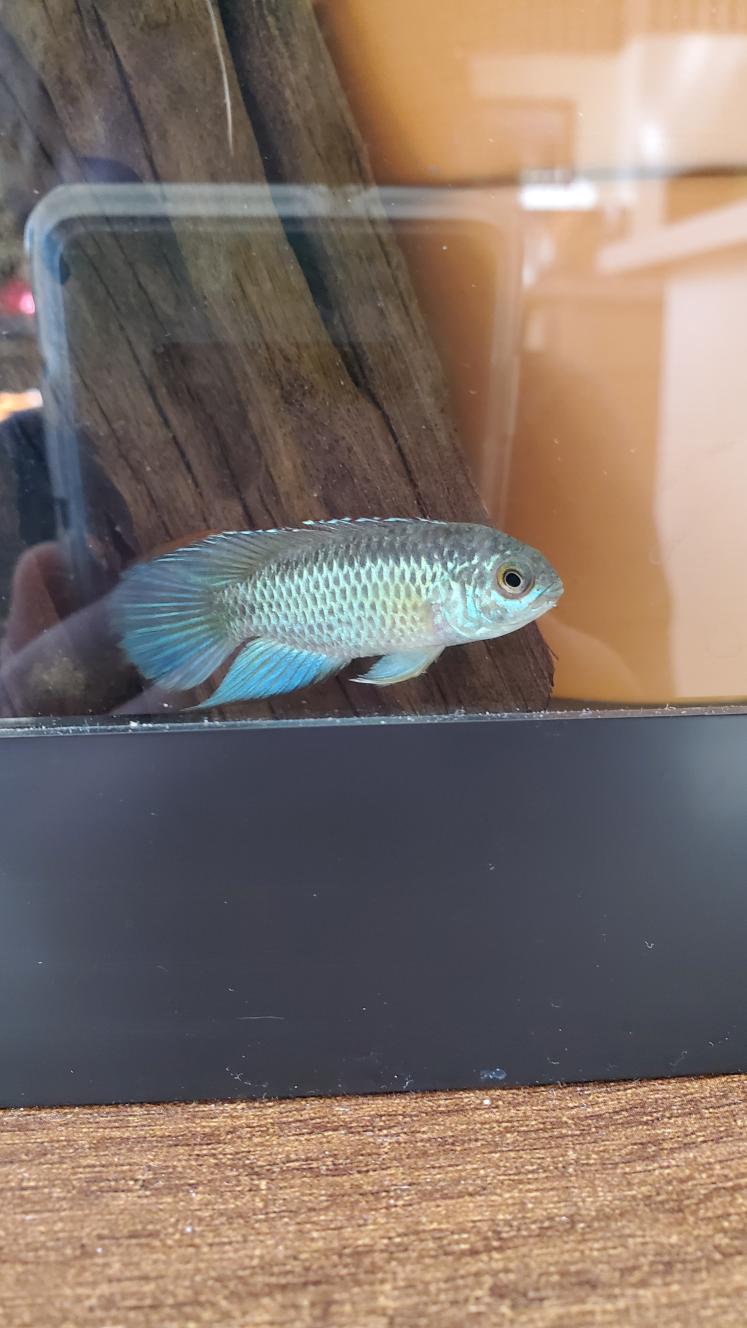 After a week they were doing pretty well. There was one REALLY tiny female that I wasn't sure if she'd make it but she is/was still alive. But the two most mature fish seemed to have paired up and my female was starting to look like she was in breeding dress. 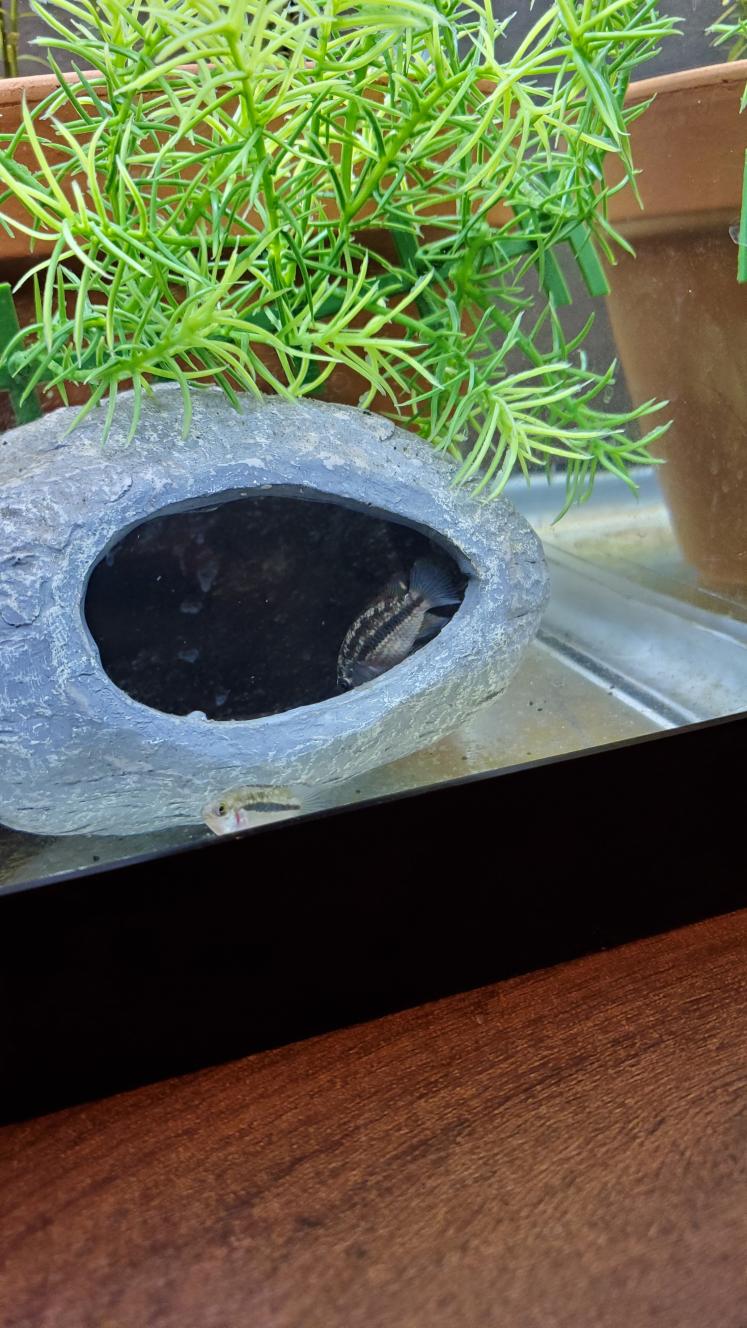 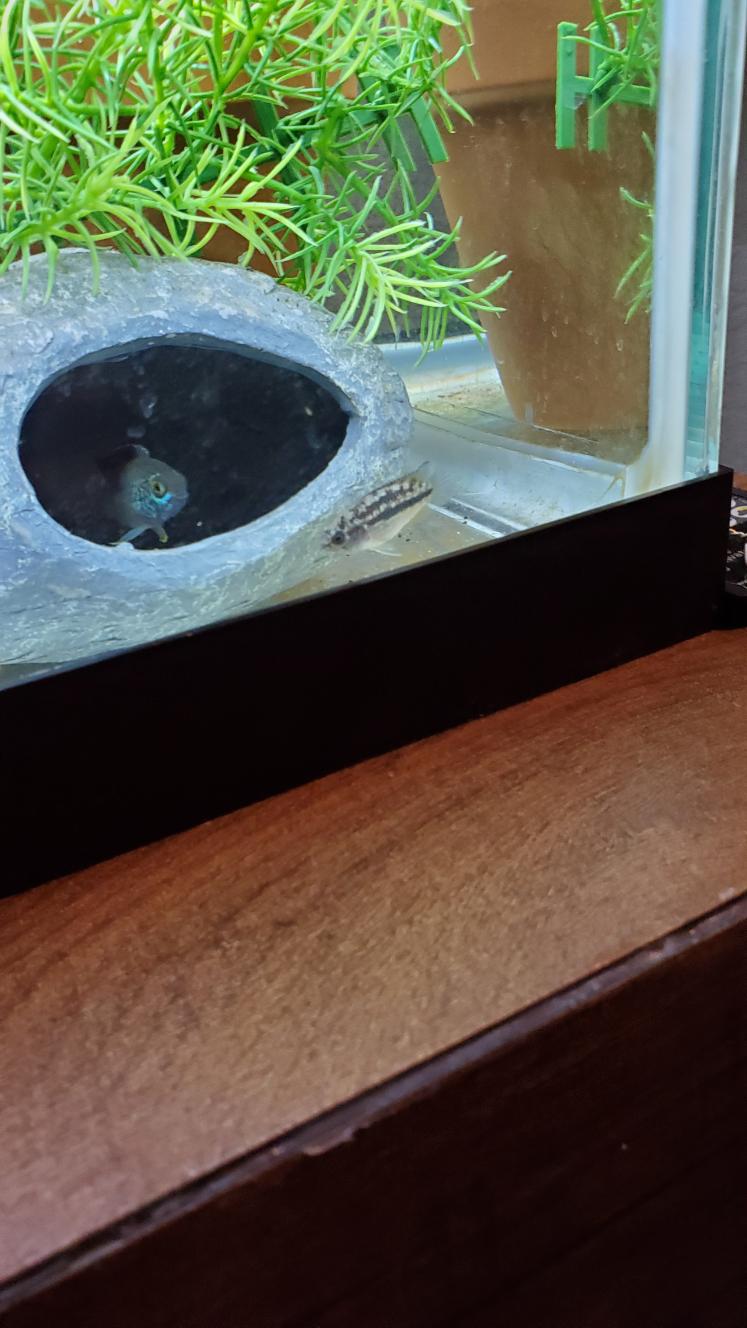 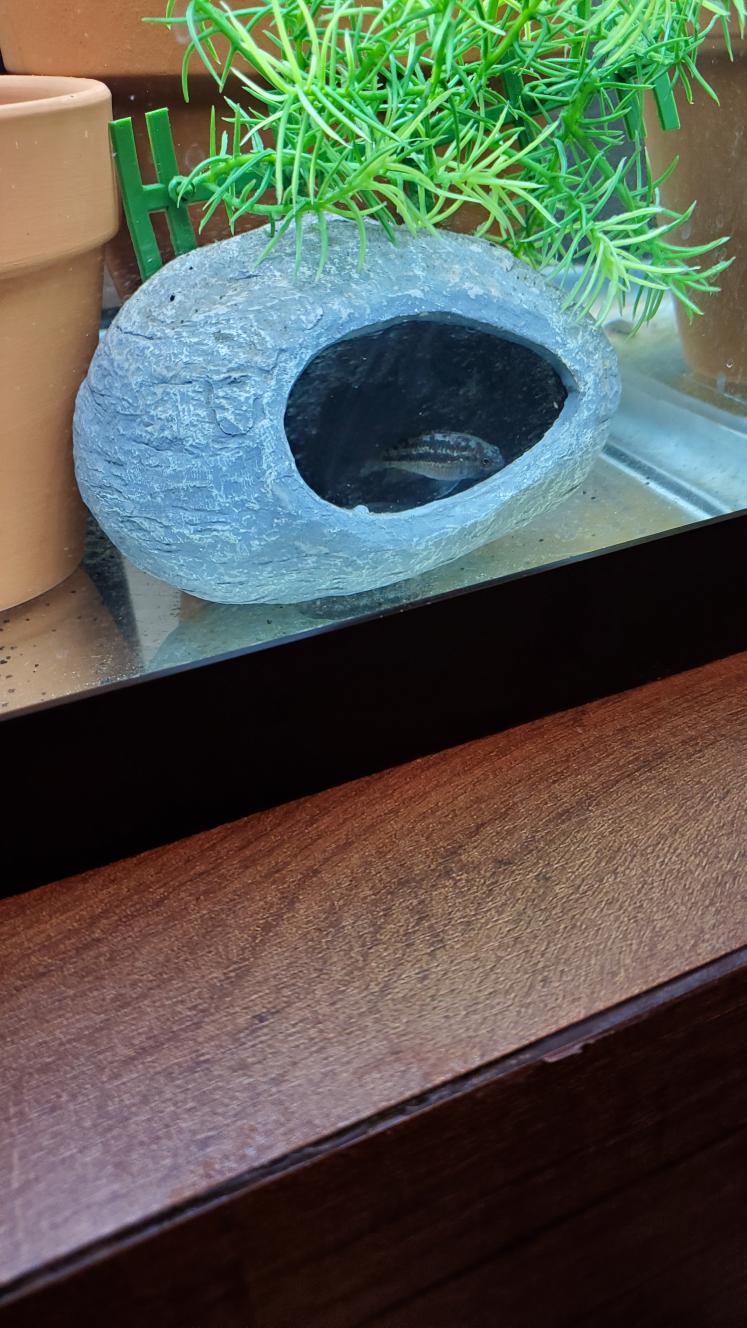 So after their next water change I moved them to my 20 long. Then last Wednesday night I noticed the female being aggressive to the male. So I checked. And low and be hold, I had eggs. 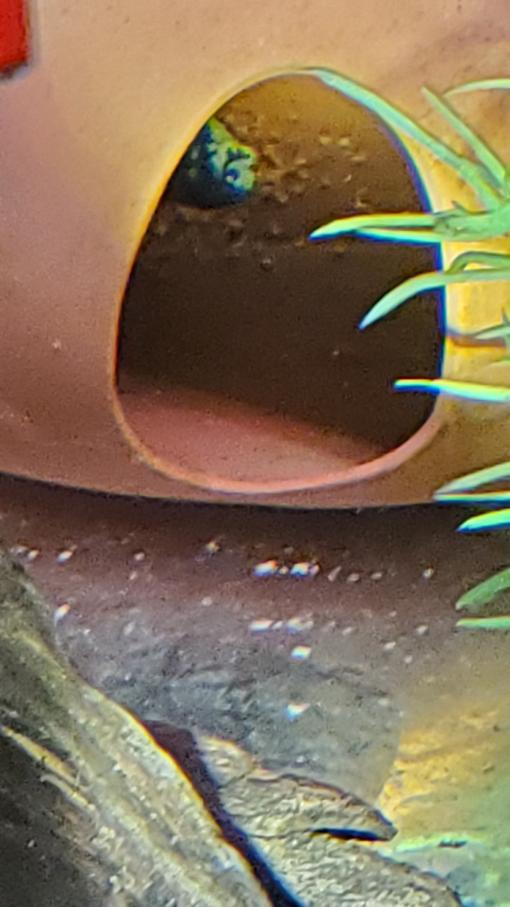 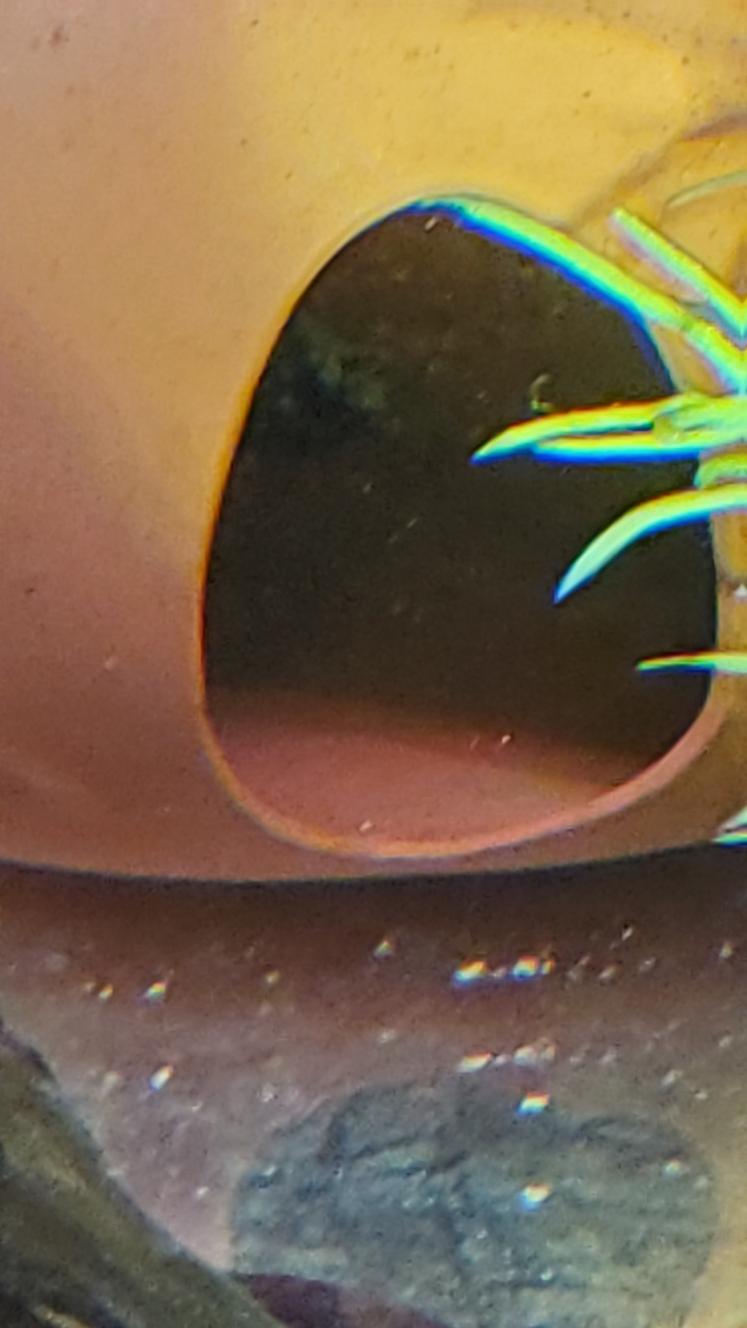 It's now Sunday and when I got home this afternoon I found fry! 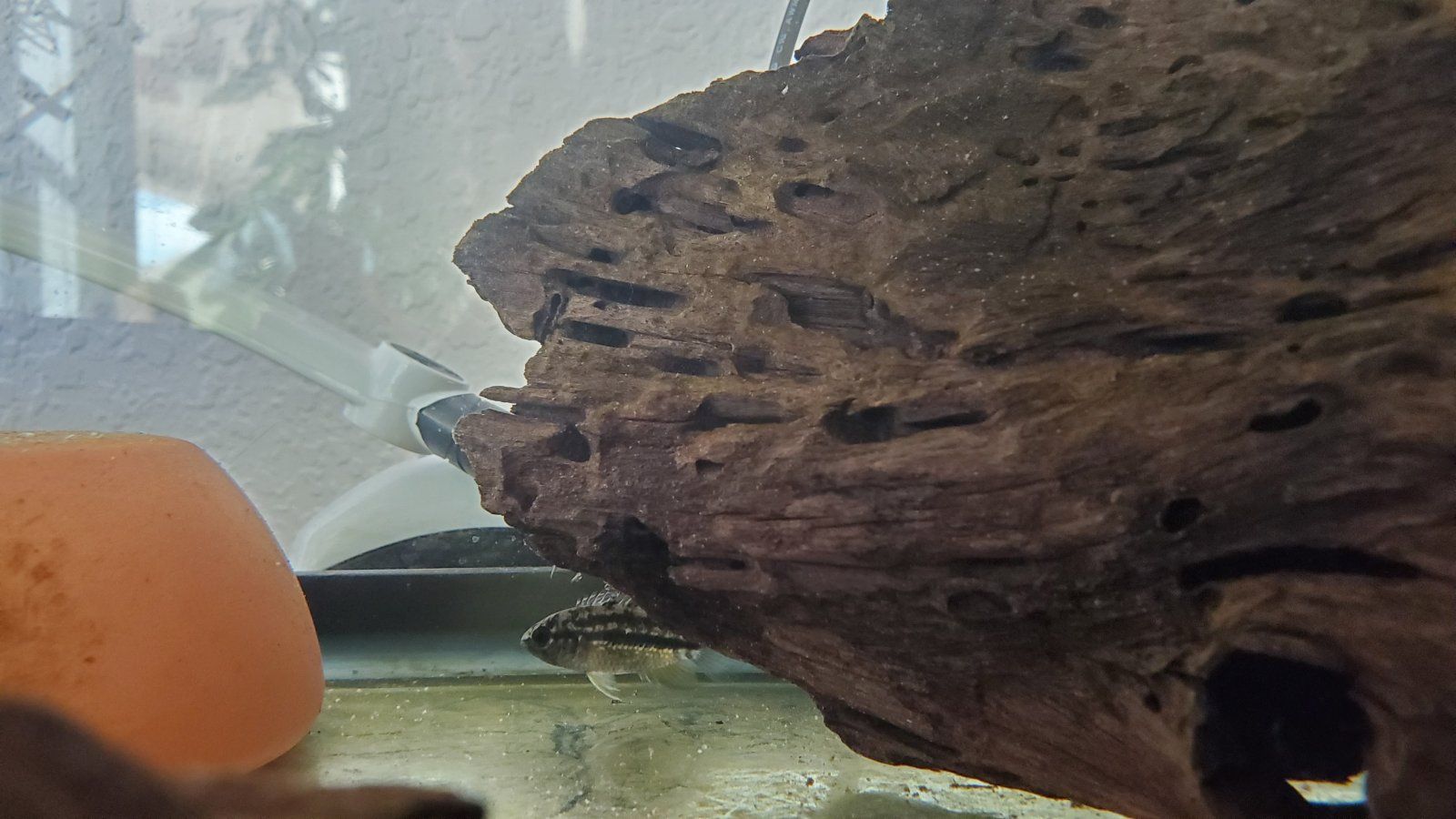 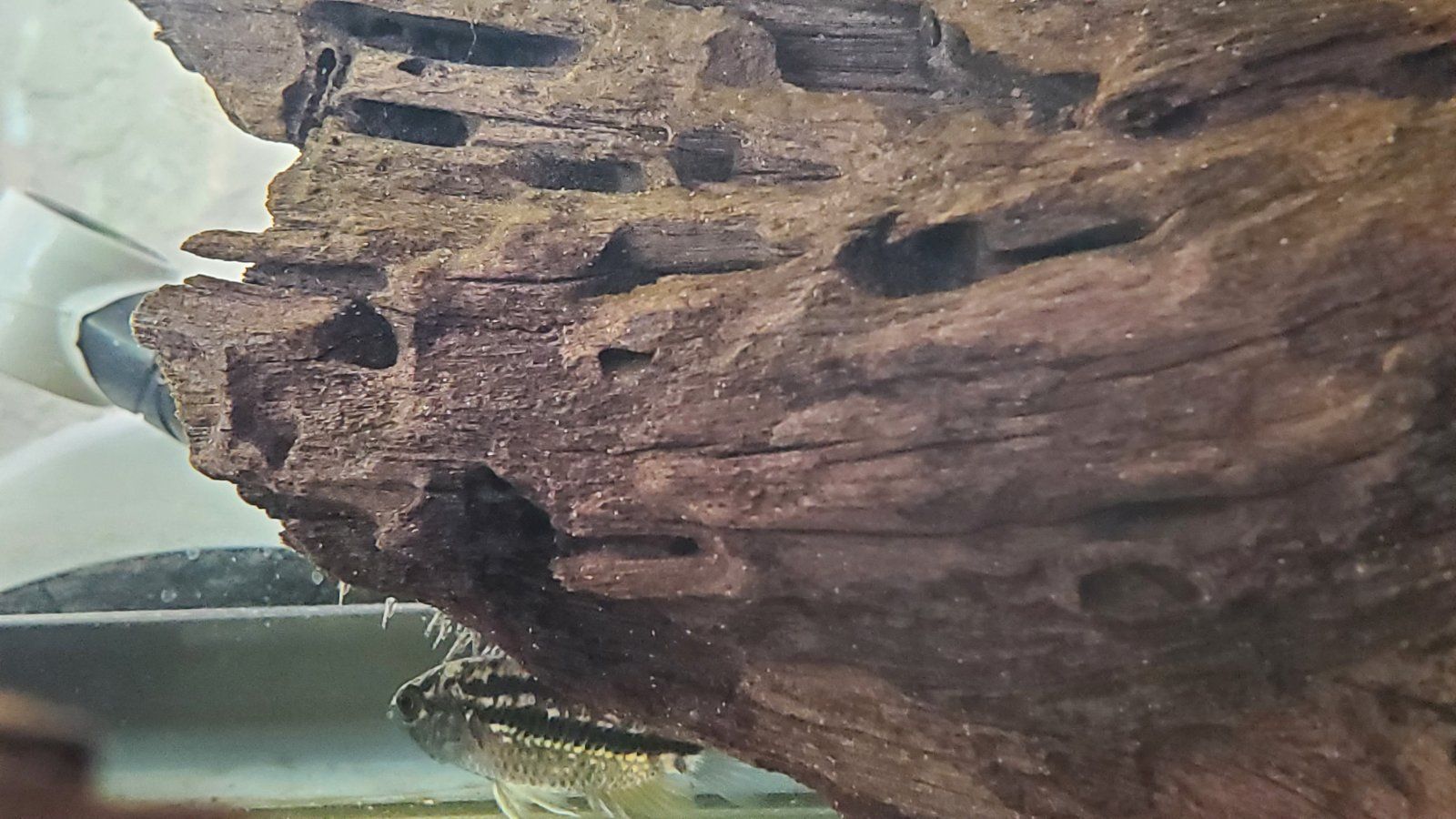 They don't seem to be free swimming yet and most of them are laying on the bottom of the tank. The female is doing an amazing job so far! She's eaten all of the non fertilized eggs and is guarding the fry faithfully. I have not had to remove the male during this entire time - which surprises me. I've heard reports of the female killing the male. I think having them in a 30" helps.
His current favorite spot is here, where the female won't bother him: 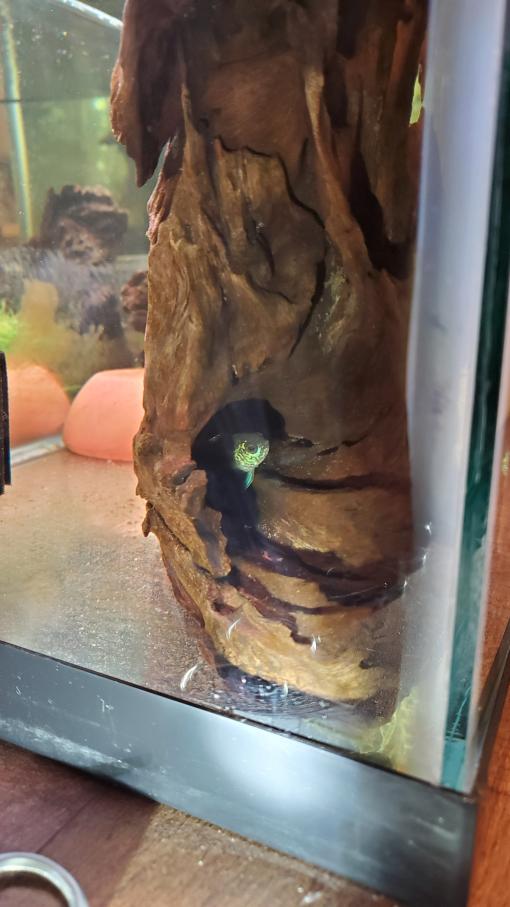 Super cool! I hope all the fry do good!
OP
OP 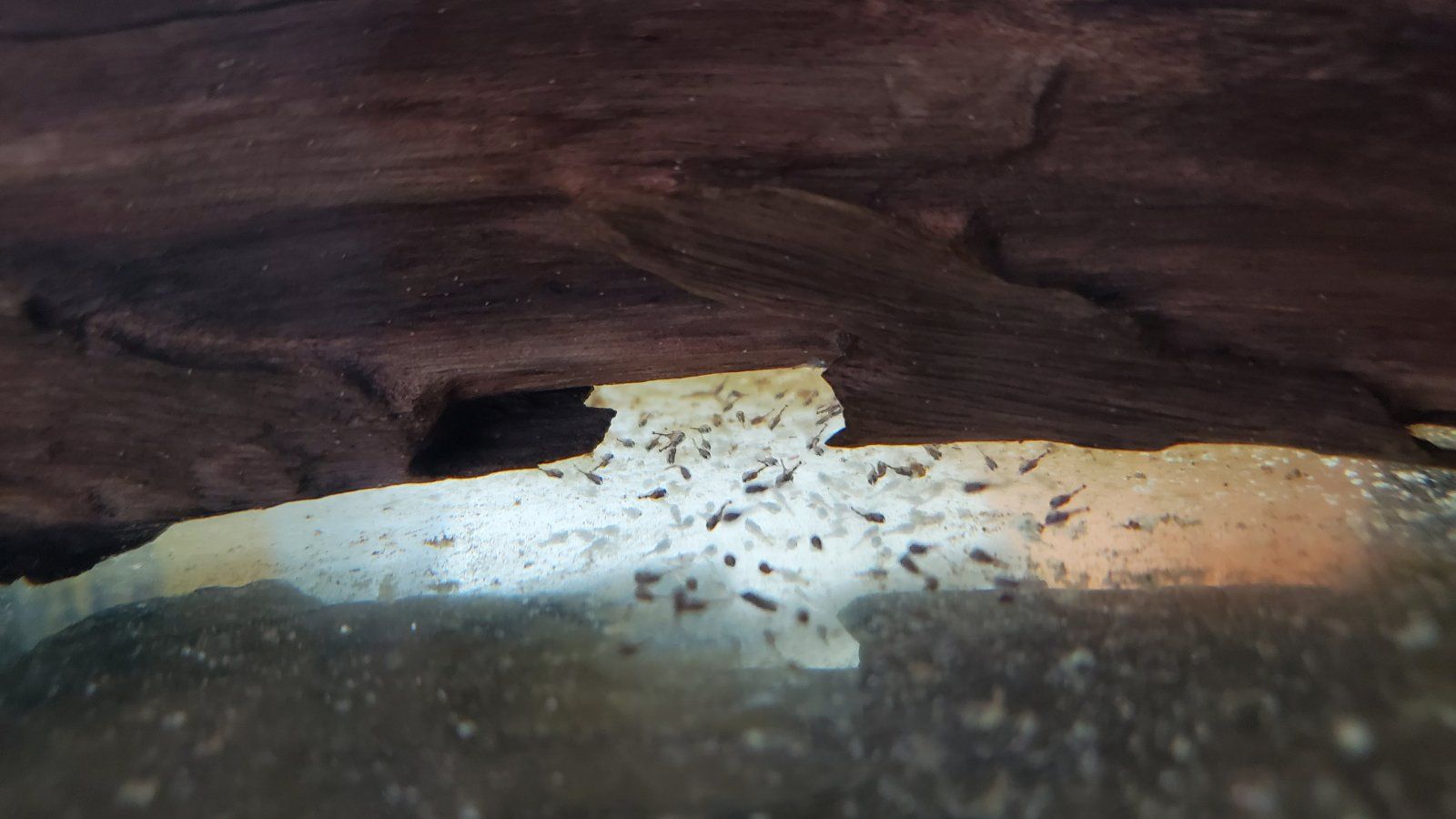 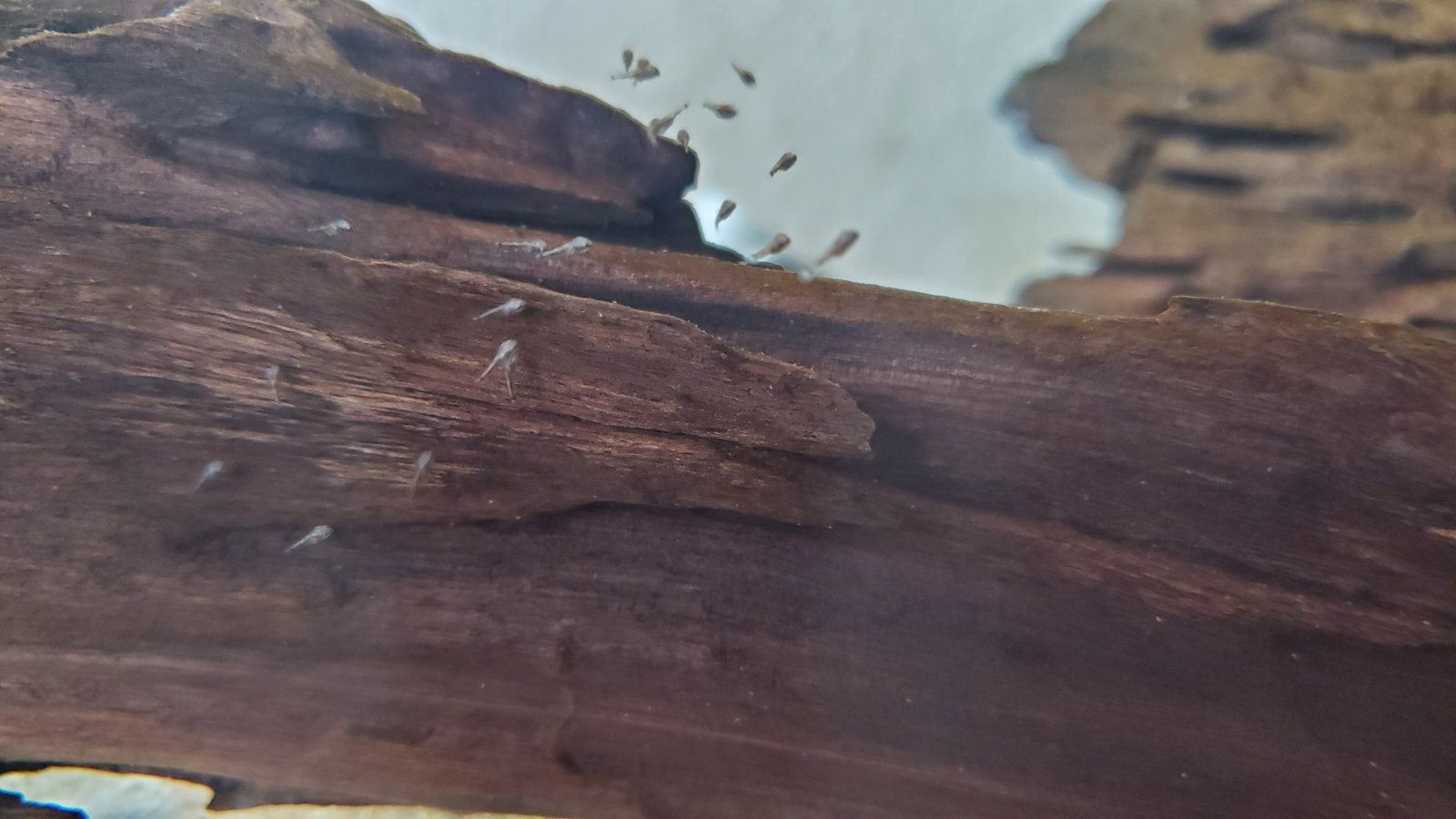 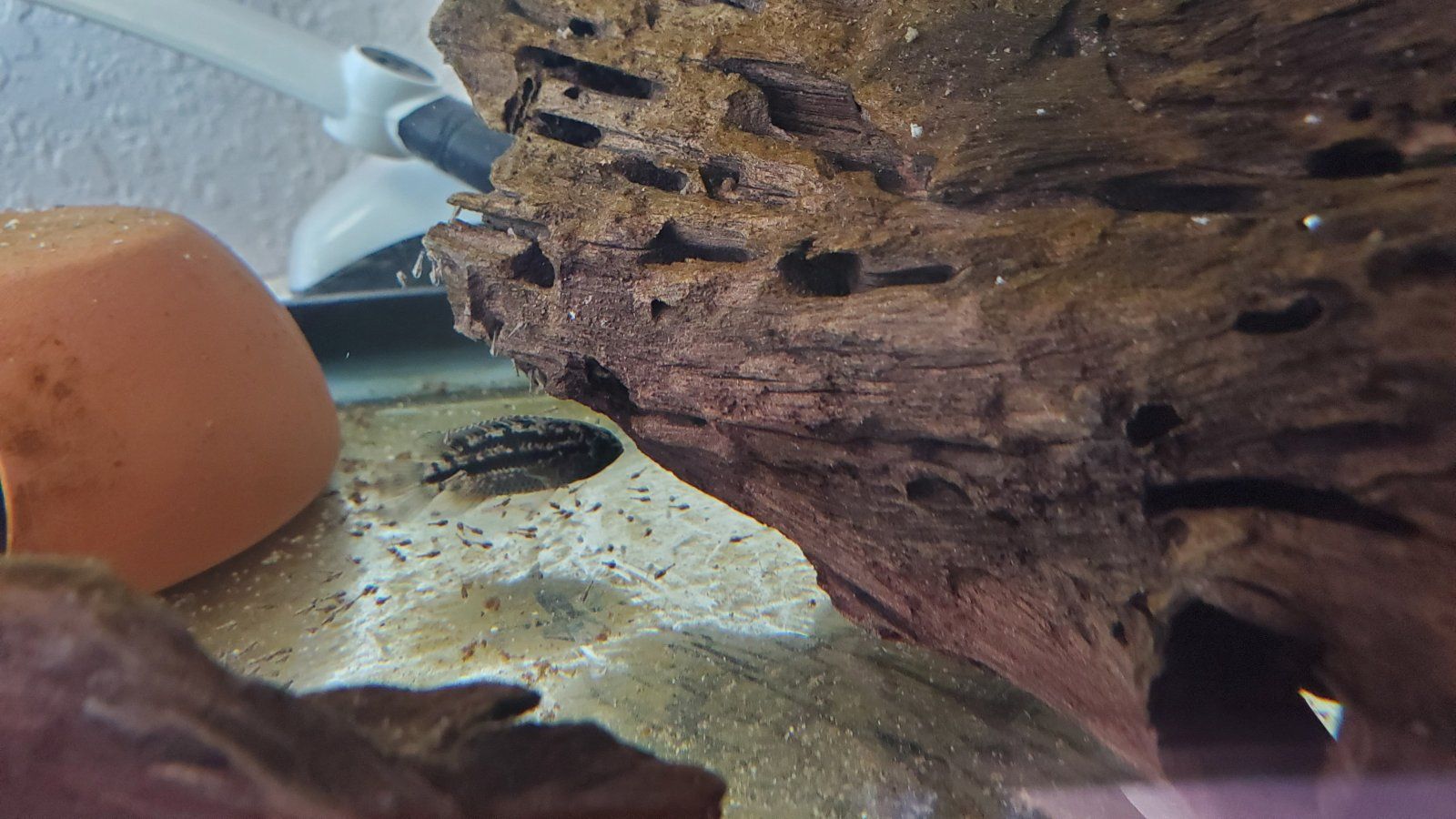 Forgot to plug in my heater after my water change last night. A few died. I'd say im down to 45ish
OP
OP

I'd say im at about 30 now. The ones that are left are starting to show markings and they tiny fins are visible to the naked eye.

Watch out when the parents are ready to spawn again. They tend to kill older young they see as threats to the eggs. In nature, they would swim away, but we trap them in close quarters.
Mine would breed again in 3 to 5 weeks. I never had any trouble finding homes for that one, or the other Nannacara.

GaryE said:
Watch out when the parents are ready to spawn again. They tend to kill older young they see as threats to the eggs. In nature, they would swim away, but we trap them in close quarters.
Mine would breed again in 3 to 5 weeks. I never had any trouble finding homes for that one, or the other Nannacara.

Oh, yes. I have heard of that. I currently have the male separated. Ill move that female to my 55 when i think the fry are big enough to be on their own in my 20.

Im down to about 20 fry but they are going well. I can see fins and body markings.
OP
OP

Ok, been way too long since i updated. So the numbers slowly dwindled until I was at about 10. At that stage they were eating well. Then I started seeing a dead fry about every day. I was wondering what was going on as they were all eating well. Next day I see the mom attack and kill one. Removed her immediate. I was down the 3 then. Moved everyone to a breeder box and set them in my 36. 2 died shortly after. But I an glad to report that the lone survivor is still doing well to this day. About 3/4 of an in long but I just feed once a day now.

I was fish-sitting for a friend so i had my 20 cleared out and set up with her fish. She came back from vacation about 3 weeks ago and i set up my pair to breed again. In 5 days I had eggs. Moved the male the second I saw the eggs. Mom is currently hovering over a group of wigglers that aren't free swimming yet. I'm going to try feeding BBS this time, but we go on vacation in three weeks, and it would be unrealistic to have my neighbor keep a culture of brine shrimp for me so I'm going to have her use First Bites. I'm hoping more than one will survive this time. I'll probably move the mom around 4-5 weeks.
You must log in or register to reply here.