We have a winner in Fishforums
September 2019 Pet of the Month Contest
​
We had 9 awesome pets entered in the POTM contest but only one could win...

And the winner is..

Let's all congratulate Jan and her cool Parrot
LOLA

Here is Jan's photo and description of her pet Parrot Lola 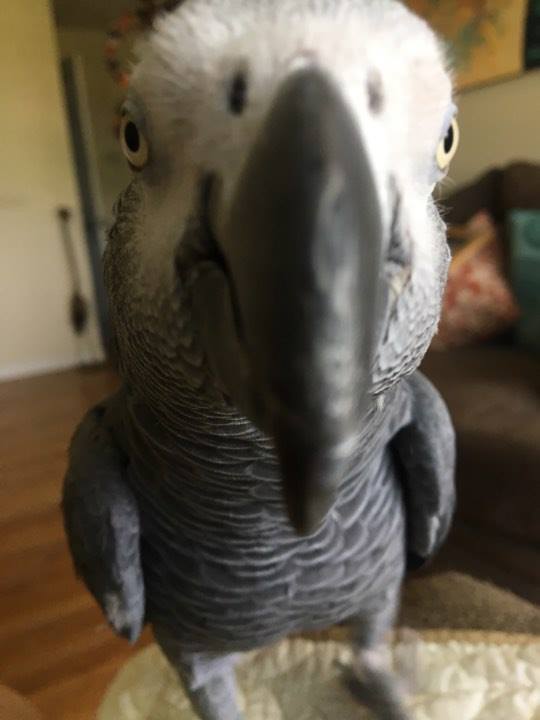 ​
This is my 14 yr old African Grey. The breeder insisted he was a female so we named him Lola. A DNA test at the Vet's office showed Lola was a male. When my veterinarian called me with the news he sang the song "Lola" by the Kinks. If you're not aware it's about a beautiful woman that turns out to be a man. So he will always be Lola or Lolabird. Due to my current illness he is being housed at an awesome sanctuary - they will keep him as long as I need them too or forever if I die. Right now I am just not physically able to care for "Mr Destruction" as I affectionately called him. Reports on him make me think he's having so much fun he may not want to come home!

One of the funniest things he does is bite me on the hand then say "Don't bite mama" after the bite. He speaks quite a number of words but since he's been at the sanctuary he doesn't talk much any more. With me he always said "I love you mama", "EAT SUPPER". When I was on the phone - I would hear him in the background copy my side of the conversation like "oh ok, hmm, ok, nevermind. goodbye, I love you," He would call my daughter to supper "Hey Liz supper" and he also said "Hey Liz clean your room" (we specifically taught him to say that - the other words he picked up on his own). He mostly picked up the words my husband (recently deceased) said, rather than things I said. So my husband being ex-marine, New York, Italian had quite a vocabulary that always included the "F" word. So it would be "F*ing cat" , "F*ing dog".

He LOVED golden oreos. He would pop off the metal lid to the cookie jar, which made the dog come running. He'd pull out an oreo, twist it open with his feet and scrape the inside out with his beak. The whole time the dog is drooling while Lola took his sweet time. He would then drop the cookie part on the floor for the dog to eat. Then he got into the habit of waiting until the dog's head was down eating and would drop the cookie jar lid on her head. She still went for her cookies but was constantly on the lookout for that lid to come flying down. He's got such an evil sense of humor.

I love this guy to death - and dearly hope he can come back home as soon as I recover - if I don't recover then I know I've had 14 wonderful years with him and the sanctuary will always be there to care for him (he's one of the spoiled favorites).

Congrats Jan on your winning entry in our Pet of the Month contest. What a cool looking Parrot with a personality to match. Hope you regain your health so you can rehouse LOLA!

PS: To our members: Our Tank of the Month contest restarts on October 1st. So, if you want to enter your tank, take one good picture or a youtube video of your tank and be ready to enter TOTM.

Thanks for your participation in our contests!
Last edited: Sep 26, 2019

Congratulations! The bird is adorable and your description made me fall in love with him.
OP
OP

For those who didn't win this month's pet of the month contest, feel free to reenter your pet again in November's Pet of the Month contest.

Congratulations! I loved the picture so much, I voted for you!

Thank you all so much - the other entries were really stunning. Lolabird says "Hello" - You can check out his youtube videos if you'd like - and these were taken when he was only 2 yrs old! After that he would clam up every time he saw or heard a video camera - I've hours of video with him refusing to say anything. He's seen these videos on TV so maybe he's just camera shy

Thanks again - this is quite an honor. But as a caution, please think twice before purchasing a parrot. Not only will they likely outlive you, they require special diets (not just Oreo cookies) and they are by far one of the most destructive pets you'll ever own. They require complete supervision when out of their cage - which needs to be at least 6 or more hours a day. They get very strong emotional attachments, and the loss of their owner can actually lead them to stop eating and falling into a deep depression. I worried about that before I placed him at the Sanctuary but these folks are such professionals they gave him extra love and care - and I would have had to take him back if he could not adjust - luckily he's a very outgoing guy that loves new experiences so his adjustment was smooth.

One more sweet story about Lola - the Sanctuary also cares for one lady - Sharon - that has mental deficiencies as well as physical. The staff there are all vegetarians or vegans except for her (she wouldn't eat her vegetables) Lola LOVES meat and he now shares dinner with her every night (he always had his own dinner plate when he lived with me but he liked to sample everybody else's dinner as well) . Lola tends to bite if he doesn't get exactly what he wants when he wants, but he has NEVER bit Sharon. He's very gentle with her. It's an amazing bond. I'm so proud of my little guy.
OP
OP

Jan...you will soon be awarded with a "Pet of the Month Winner" profile banner. Well deserved win!

Can I enter in for tank of the month ?
OP
OP

Moony42 said:
Can I enter in for tank of the month ?
Click to expand...

Seeing it's been 3 months since you won TOTM, you would qualify but would need to enter a different tank...not the one that won in June...and you must have the tank in your household.
Last edited: Oct 1, 2019

No problem. Thanks fishmanic!!!

Congrats on the win! You (and Lola) deserved it.