How do you clean substrate when you have shrimp?! An odyssey

Essay post ahead, fair warning! I find it impossible to be concise. It's a problem.

My shrimp tank is heavily planted, with a fairly deep gravel layer, so I really have to push the syphon quite far down into the gravel when gravel vac-ing, and get a fair amount of dead and dying leaves to remove. My shrimp have only started producing shrimplets (so many shrimplets!) in the last couple of months, so I'm still getting the hang of having them -I love them so much! I'm so delighted that they're breeding so well, but it has its downsides...

I was already sorta prepared since I've been letting my guppies breed, and no matter how careful you are, sometimes a tiny fry takes a trip through the syphon. I replaced my dark purple fish bucket with white ones, which made it much easier to see little eyes and spot movement. I thought I could do the same for shrimp. Not so! They're soooo much harder to spot than guppy fry, since they hide down in the mulm at the bottom of the bucket, and they're so transparent when tiny. Have tried covering the syphon with pantyhose or netting, but then I can't push it deeply into the gravel, and my tank produces a lot of mulm that just gets clogged against any netting I tried. Any net small enough to stop newborn shrimplets is also too small to really clean the tank, and I think it would be more likely to injure a shrimplet to be trapped against a piece of netting with the pressure of the syphon pushing all that muck against it. Better to just go through the tube and be fished out of the bucket.

But the hiding, and when the shrimp is too small to have any colour yet, and they're sitting still... omg. I put the bucket in a window as the natural light makes it easier to see, and let the muck settle. Check for movement and colour. Leave it a while longer, check for movement etc. Then pour half of that into another white bucket, settle, check for shrimp. It's a whole process, but I can't bring myself to throw out a bucket of water that might have a baby shrimp in it. I've saved quite a few using this method. I also try so hard to move any shrimp away from the syphon tube before placing it over the gravel and un-pausing the syphon (I start the syphon then hold my thumb over the bucket end of the tube to pause it from sucking until I'm ready for it to suck). But they're not terribly bothered about the syphon, and begrudgingly move away, lol. Plus it's hard to see if they've all moved away when you're working behind a plant or at the back of the tank.


This little dude nearly got thrown out today. 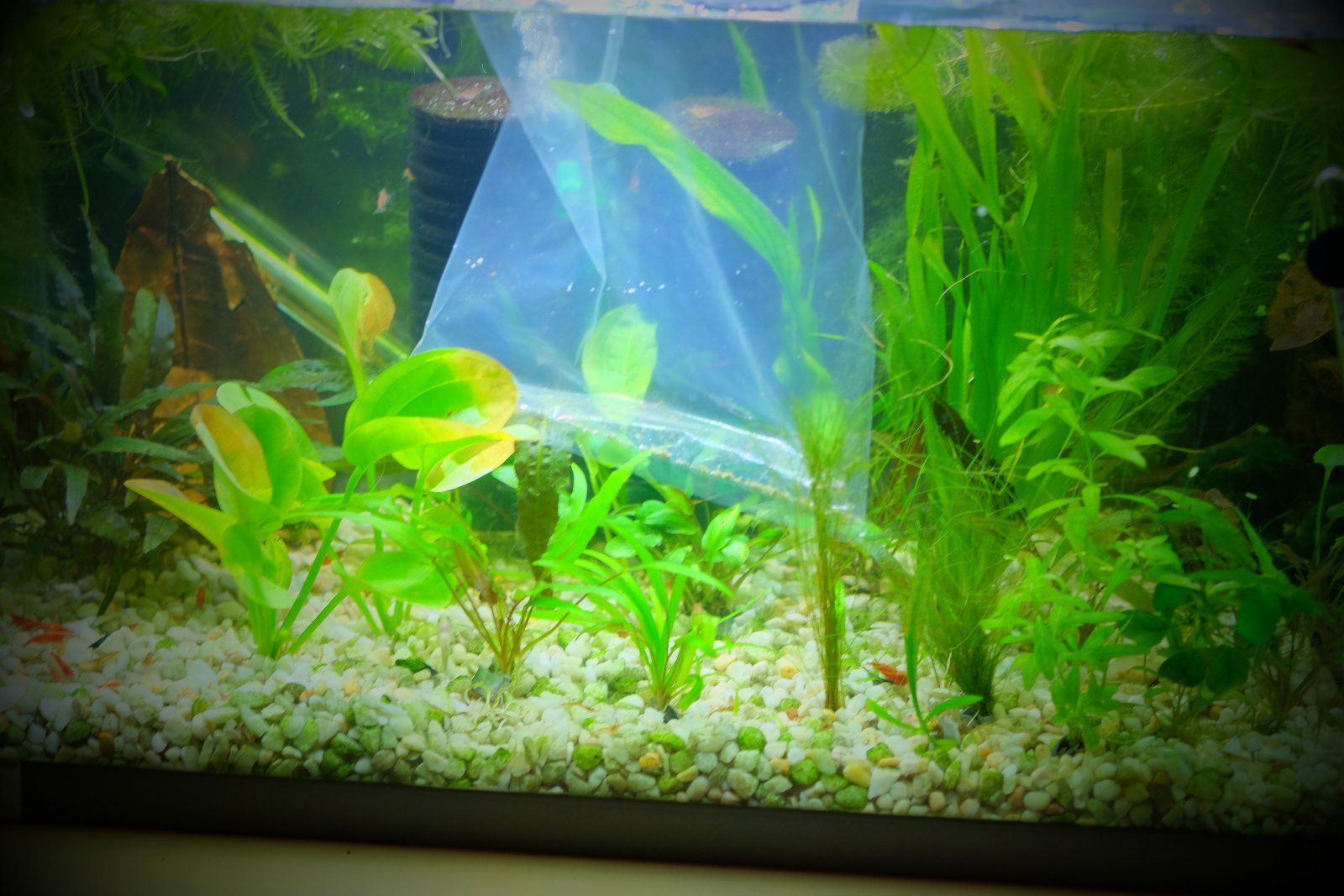 I know you can't see him, I can barely see him myself with the naked eye. I did the usual; checked the bucket a few times, stirred and let it settle again and re-checked, no movement. So I used the water to rinse the sponge filter out. Lots of brown water and mulm in there after that! Left it in the window to let it settle again, just to double check since the shrimp love the sponge filter. No worries, it eventually mostly settles, I check, no movement. I work on refilling the tank and replacing the filter, leaving old water in the window. Then I have to leave for an appointment, so I check the tank is all back on and fine, head out for a couple of hours.

When I came back I was tidying up, went to pick up the bucket to go pour it on my plants outside, and see a tiny shrimp dart! I go grab my fine net, and of course by the time I got back I couldn't find him again. But I can't throw it out when I know there's a baby in there. I'm staring, can't see him, and there's so much muck in there. I stir it up, look for darting, wait for it to settle, flick the bucket to try to startle it, wait and watch again... so. many. times. Nothing. But I know he's there, so I'm stuck.

I get second bucket. Use a clear jug, remove some, check, pour into second bucket, check, throw out that jugful. Repeat several times, stirring the OG bucket to remove as much mulm as I can, but without making it impossible to see shrimp. Bucket is half empty by now, settles again, still nothing. I've spent more than an hour by that point staring and waiting and sifting, leaving and coming back; even using an aquarium planting stick to gently move over the mulm, to try to make the shrimp move without stirring the mulm too much. Nothing. I started to believe I must have missed him in the jug and thrown him out. But I still can't bring myself to throw it out when the baby might be in there. I leave the bucket while I'm doing housework, going to the window now and again to look, but still can't see him. Finally, after another hour or so, I spot him! I'd left the net handy this time so I didn't have to take my eyes off him, and tried to net him. Checked the net, but still couldn't see him. left the net balanced on the bucket, grabbed a fish bag, filled with water from the bucket and placed inside jug and folded the sides down. Put the net upside down into water and removed, then checked. He was in the bag! Little bugger made it almost impossible to save him, but I got him.

Since the bucket water had dropped temp a lot over the five or so hours since I took it from the tank, he's in the bag temp acclimating back to the tank now. Next I have to make sure he actually makes it out of the bag and back into the tank....

I love these little things, but they're giving me grey hairs. Here's the ones that did take the food bait and move to the clean corner of the tank so I could clean the rest. You can see one of the blue boys I got last week who seem to be settling in wonderfully. Thank you if you made it all the way to the end! I had to get it off my chest. 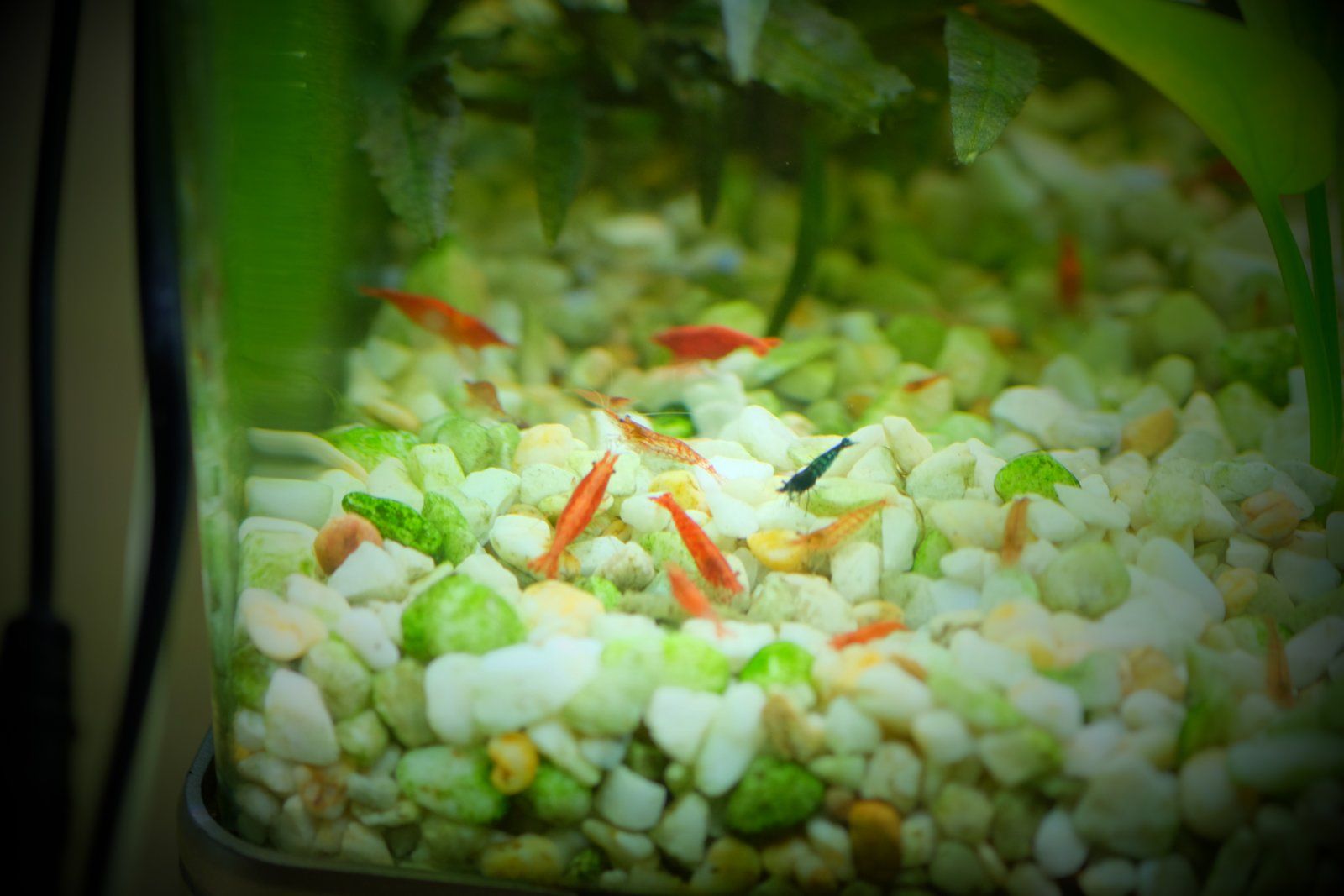 Sort of swish the vacuum around where you shrimp are. I have a similar issue with my Cherry Shrimp.

If you swish it around near them, they will swim away. Then you can clean.

I need to know this as well.
Two yellow buckets arrived this morning. I’m doing my first gravel clean then water change tomorrow since adding 13 rili shrimps and 4 rams horn snails at the weekend. They were free courtesy of the old boy on the corner. He’s been fishkeeping for over 40yrs and there’s been nothing added to his tank or died in there that he knows of for over a year so I took the risk and put them in.
Ive previously decimated the stowaway snail population with my Neanderthal gravel cleaning into black buckets technique so this time I’m hoping it’s different.
Help us please? Someone? Im an old dog keen to learn new tricks!

So what is your actual question @ClownLurch?
OP

PheonixKingZ said:
So what is your actual question @ClownLurch?
Click to expand...

She wants a foolproof method for cleaning substrate without sucking up tiny baby shrimp.

PheonixKingZ said:
Sort of swish the vacuum around where you shrimp are. I have a similar issue with my Cherry Shrimp.

If you swish it around near them, they will swim away. Then you can clean.
Click to expand...

I wrote a very long post, so it's understandable that you missed this;

AdoraBelle Dearheart said:
I also try so hard to move any shrimp away from the syphon tube before placing it over the gravel and un-pausing the syphon (I start the syphon then hold my thumb over the bucket end of the tube to pause it from sucking until I'm ready for it to suck). But they're not terribly bothered about the syphon, and begrudgingly move away, lol. Plus it's hard to see if they've all moved away when you're working behind a plant or at the back of the tank.
Click to expand...

PheonixKingZ said:
So what is your actual question @ClownLurch?
Click to expand...

Whoops, sorry! I didn't mean to assume your gender. You're a dude?

Get some force behind that siphon. They will move. You can’t just gently try to swish them out of the way. You need to give them something to be scared off, so they will avoid it in the future.

I’m not really sure there is any true “foolproof” way of cleaning substrate with shrimp, it just takes practice and patience.

AdoraBelle Dearheart said:
Whoops, sorry! I didn't mean to assume your gender. You're a dude?

Seemingly in touch with my feminine side.

AdoraBelle Dearheart said:
Whoops, sorry! I didn't mean to assume your gender. You're a dude?

Yes, he always says “I gotta get Ms. Lurch on board before I get more fish/tanks.”.

PheonixKingZ said:
Yes, he always says “I gotta get Ms. Lurch on board before I get more fish/tanks.”.

I've only been here a week. Believe it or not, it takes most people longer than that to get to know who everyone is...

Some people show who they are very clearly right from the jump though. How's the tank cleaning going? Are you tearing it down?

ClownLurch said:
Seemingly in touch with my feminine side.
Click to expand...

ClownLurch said:
Seemingly in touch with my feminine side.
Click to expand...

Nowt wrong with that. My apologies, I'm picturing you as a male clown now, so I won't get it wrong in future Also congrats on the new shrimp! My current method of letting buckets settle then checking for movement usually works and doesn't take hours, so give that a shot in the meantime. But it would be great if anyone has developed some better techniques for really making sure.

I also was new to shrimp but they did get out of the way, just take it a little slower to give them a chance.
You must log in or register to reply here.
Share:
Facebook Reddit Pinterest Tumblr WhatsApp Email Link

what is in my tank?

17 minutes ago
Argh
A

Sump I designed for my small 11 gallon tank