Don't be fooled by the beauty of the Red Tail Shark. You'll regret it.

I've had a few and they were great looking fish,jet black body,fiery red fins and the elegant white tipped dorsal fin. ALL comes in a 4- 6" body that will spend every waking moment chasing all other fish around. It's the same bluff as they don't do damage..they just wear some fish down to an illness from the stress.
I almost fell for yet one more try the other day but I resisted the call. Then,to see a vid of one showing the bad attitude a day later made me almost do the proverbial sigh of relief.
Unless it's cichlids or big Tinfoil Barbs as mates,avoid the RTS.

I could not agree more.

Never lend them money, either.

They simply wear down tankmates, often through night-time harassment.

Never have had them but you're right. They are a great looking fish.

Wise words. This species was believed to be extinct in the wild until 2011. The following excerpt from my profile explains this for those interested.

Origin and Habitat: Originally widespread over the Chao Phraya basin and possibly the Mekong system. Previously believed to be extinct, in 2011 it was listed by the IUCN as critically endangered and considered probably extant but unconfirmed in the Chao Phraya in Thailand (IUCN 2022).​
​
In 2011, Dr. Chavalit Vidthayanon assessed that the species is still extant in the Chao Phraya Basin but strictly localized, nevertheless, its location is still unclear (Kulabtong, et al, 2014). In the same year, the population of E. bicolor was reported to be extirpated in the Maeklong Basin and Bangpakong Basin (Vidthayanon, 2011). At present, the occurrence of E. bicolor in the wild is certainly confirmed in the Lower Maeklong Basin, Kanchanaburi Province, West Thailand, whereas it is still unclear in the Chao Phraya Basin due to the lack, to date, of documented evidence (Kulabtong, et al, 2014).​
​
This fish lives in gaps between the rocks and its habitat is characterized by large rocks and a sandy bottom. This area is fast flown by tides and the depth of water is more than 1 meter (Kulabtong, et al, 2014). All exports of the fish are captive bred.

Compatibility/Temperament: Not a general community fish especially for beginners. Very aggressive with its own species (it probably lived in solitude except when breeding) and as it matures is often aggressive with other fish especially those resembling it and those with vertical stripes. Should be kept solitary (one fish per tank) with carefully-selected upper-level tankmates like the larger barbs (non-vertical stripe species) and rasbora. Bottom fish (loaches and most catfish, and cichlids) should not be included with this species. This fish is ex[ported by the thousands from captive breeding in outdoor ponds in Thailand, but there are few if any confirmed reports of spawning in aquaria; this may well be due to the fish's aggressiveness which cannot adequately play out in an aquarium as it does in the wild.​
​
Discussion

A strikingly attractive fish, though one usually with a tenacious attitude. It requires a large aquarium with several good hiding spots. A good water flow from the filter will be appreciated by this fish. It is intolerant of poor water conditions and high nitrates. In a large tank with good water conditions, it will live for 15 years.

It is well known for being territorial in some way; this can be in the form of "guarding" some kind of object in the tank--this could be an ornament, filter, plant bunch or simply an area of the tank--and attacking fish that come near it.

Females are thicker than males; otherwise there are no reliable external sex differences.

Originally described in 1931 by H.M. Smith and placed in the genus Labeo [= "one who has large lips"] under the species epithet bicolor ["two colour"]. In 1998 [Yang & Winterbottom] it was moved to the present genus Epalzeorhynchos [erected by Bleeker, 1855] which contains five species, two of which are the rainbow shark (E. frenatum) and the Flying Fox (E. kalopterus). The genus name derives from the Greek epalzes [= curative] and rhyngchos [= snout].

Some ichthyologists consider this genus to be in the subfamily Labeoninae, others in Cyprininae; there are three tribes (if in Labeoninae) or three subtribes under the tribe Labeonini (if in Cyprininae). Eschmeyer’s Catalog of Fishes (2022) considers Labeoninae as the subfamily.

Seems like a fun fish to keep if it's the only one in the tank...
OP
OP
S

They are ALWAYS active doing something. They also have no real fin biting power..just chase. So,if with the right tank mates they are great fish. So you need to look for bigger peaceful fish along the lines of Red Hooks,large Tinfoil Barbs,or medium sized cichlids that are on the let live personality list.
What you don't want them with are like Angelfish and kept in small aquariums. They dont need large...but 4' and 55 gallon or over is the min.
OP
OP
S

Who posted that in their natural habitat they are never found in groups and they prefer clear streams of gravel and rocks and shallow waters..Hence they adapt to aquariums but for being on the gruff side-ha.
D

I currently have a RTS and i must admit he is a bit to handle but i do love him and think my tank is now settling down some. But I have lost several fish over time too, mollies platys and guppies and believe i am blaming my RTS but HE makes the tank more interesting. Currently my 180litre tank holds the below listed most have now all been together for a year.

1x RTS I previously posted a pic of him.
2x Bristlenose Pleco (1 male 1 female) and they are happy enough that they are breeding they were added about 4 months later than the RTS and were chased some but they now stand their ground and just blend in when they are not interested in playing. Very active during the day ;-)
2x Mollie (1 male 1 female)
1x Platty
1x Guppy
1x Leopard Frog Pleco (nothing messes with him)
4x Angelfish (not sure of sexes) They don't look at any of the other fish they keep to their group. However I am currently watching them more closely as they are beginning to show some signs of disgruntlement within the group but hopefully that won't escalate.

My opinion try one but give it space. I will keep eyes on him though.

I adored my red tailed shark. Maybe with lower nitrates he would have lived longer than 7 years, but it was a rough period in my life and I suspect I lost him due to inadequate water changes when I was phenomenally busy. He was ok with his moonlight gourami tank mate, one large male angelfish who couldn't live with his brothers, and a few good sized platies, but the tank was 4 ft long and my live plants did not live well, at all. He and that gourami ate them I am sure. I got down to mainly pothos in the tank to feed the fishes
OP
OP
S

They look great with Clown Loaches in a large aquarium. But it was a very large aquarium and had 14" Tinfoil barbs with red fins..all that color. But what worked in that big tank turns into a chase a thon in 4' or less aquariums and newbys are fooled seeing how small they are for sale not knowing they get a hefty 6" or so full grown.
They really are a specialist's fish

2x Fish of the Month!

I have mine in with smaller fish, it is a pretty heavily planted 55 gallon, so plenty of space. He’ll chase them around for a second or two every once in a while. But gets over it real quick. I don’t think he likes the torpedo shaped fish. I had him in with a school of zebra danio and they started dropping off one by one. I thought it was some sort of parasite. But, it could have been stress from getting chased constantly.

Mine loved to hang out along the back wall of the tank over the long air stone so the bubbles were going up his belly. It was a dark space and it was his favorite spot, to hang vertically between the wall and something over that air stone. Don't remember if there was a stone he wedged behind but there might have been

Mean as, but lovely to look at. This one used to beat up my Angels. I sorted it out when I put in the Severum tank 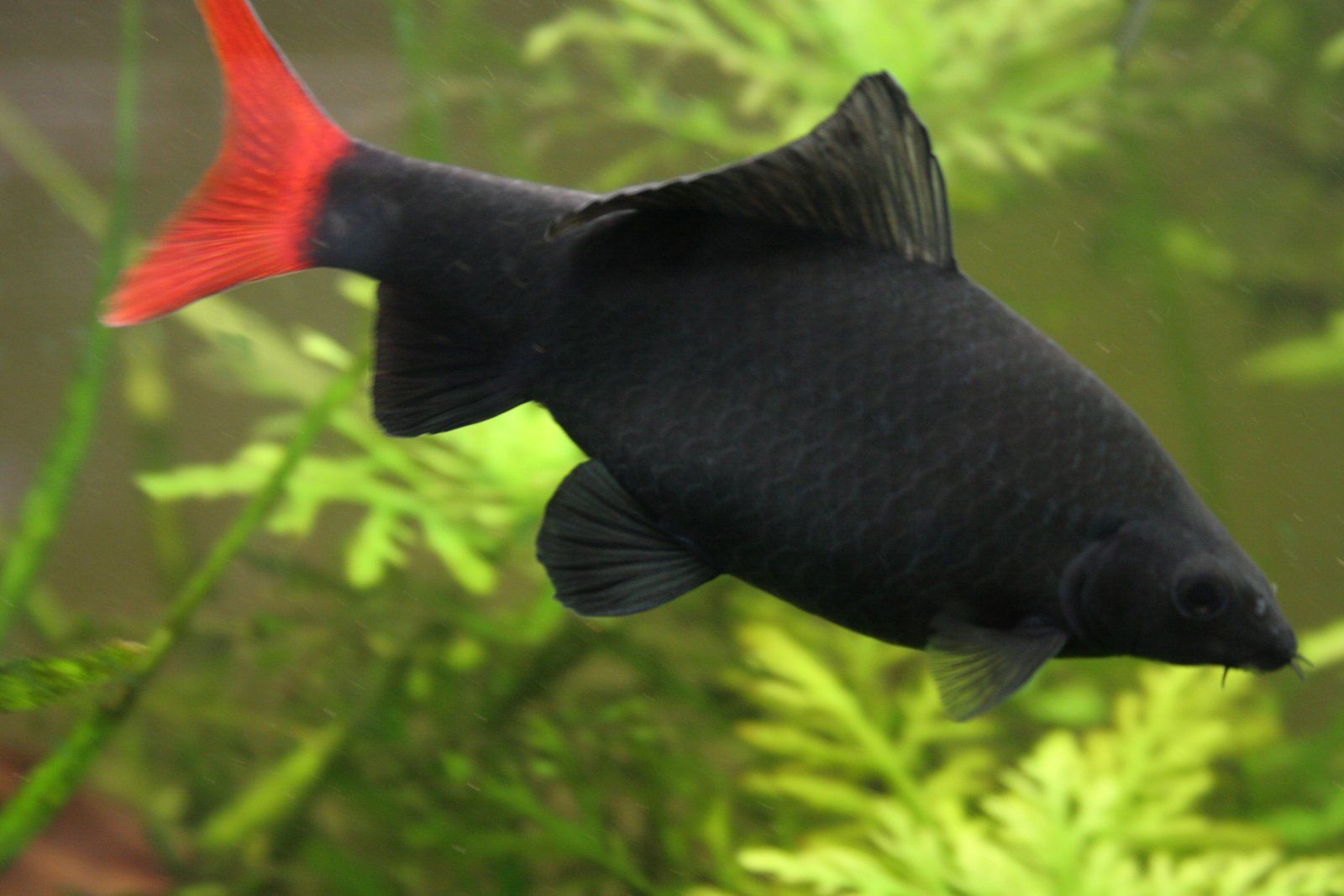 I think I am married to a red tailed shark, then.

RTS are one of the most strikingly beautiful fish in the hobby. I had one in my 55 gallon SE Asia tank. He was fine for a couple years, then gradually began chasing, and ended up completely terrorizing everything in the tank. I gave him to the LFS manager, who put him in a display tank with big cichlids. They mellowed him out a little.
You must log in or register to reply here.

Today at 6:32 AM
lspringfield
L

Fry significantly smaller then others

S
is my platy pregnant