I have a 250ltr tank, been running around a year. Heavily planted, all parameters good (chemical tests). Fish stocks a bit high, Community tank rainbows, tiger barb's, Cory's tetra's.
When I visited my fish shop l noticed a lovely Discus on it's own been there a long time, its very aggressive? with other Discus been through a lot UK bread. He feeds very well mainly pellets, flakes, shrimp. Sow I bought him, got him in the tank, been 3 ish weeks doing great, not hiding not bullying any fish feeding very well? Not being bullied.
Now l know I have broken all the rules on keeping Discus, but felt sorry for him that's me. The thing is why does he have stress marks on him, he seems happy??, should I get him a mate, or is it the other fish upsetting him. Any help would help. 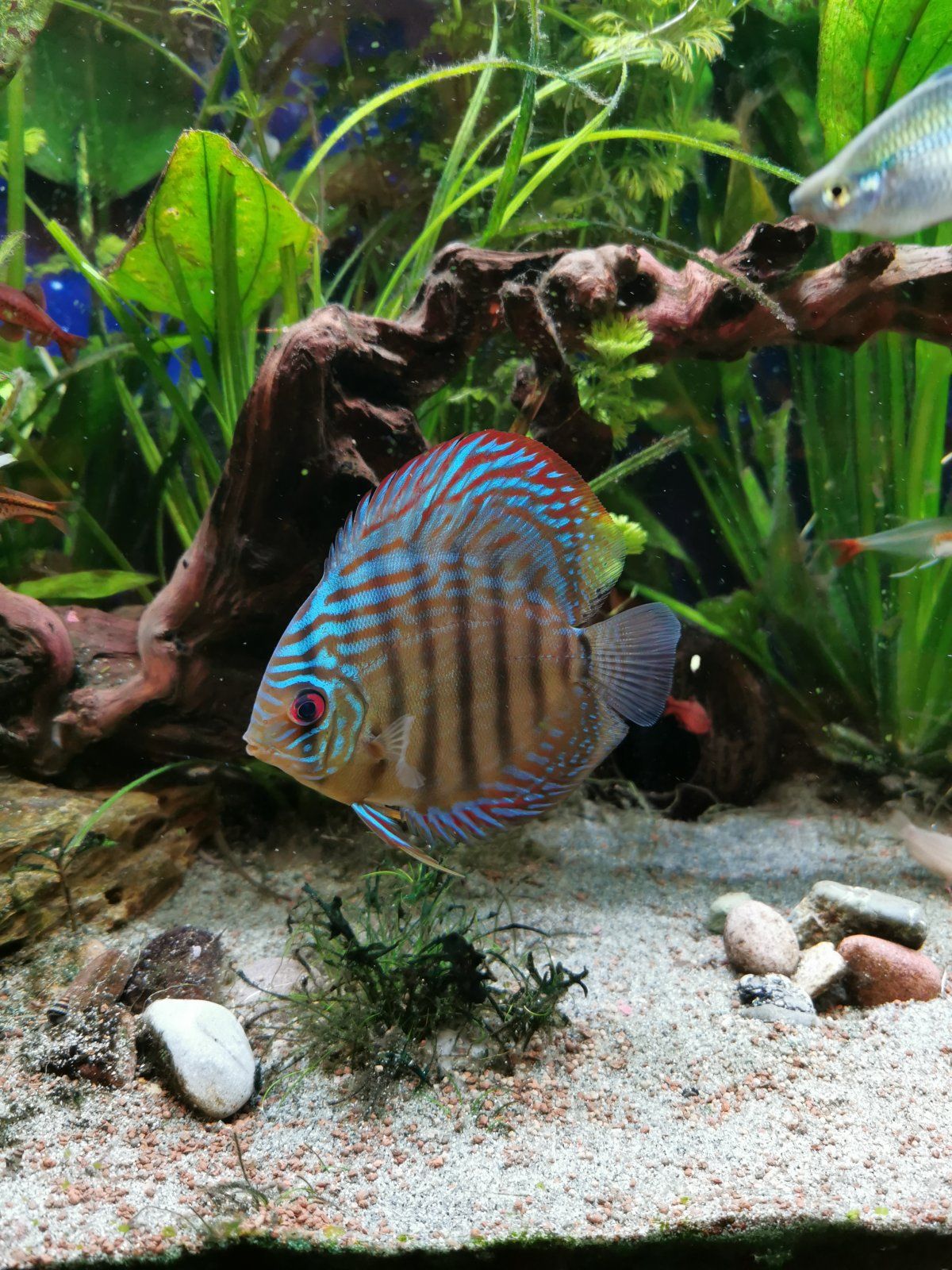 Picture of the entire tank?
How many tiger barbs do you have?
How many rainbowfish do you have and what species?
What are the tank dimensions (length x width x height)?

What is the GH (general hardness), KH (carbonate hardness) and pH of your water supply?
This information can usually be obtained from your water supply company's website or by telephoning them. If they can't help you, take a glass full of tap water to the local pet shop and get them to test it for you. Write the results down (in numbers) when they do the tests. And ask them what the results are in (eg: ppm, dGH, or something else).

When did you take the photo, first thing in the morning straight after lights came on or later?

--------------------
TURNING LIGHTS ON AND OFF
Stress from tank lights coming on when the room is dark can be an issue. Fish don't have eyelids and don't tolerate going from complete dark to bright light (or vice versa) instantly.

In the morning open the curtains or turn the room light on at least 30 minutes (or more) before turning the tank light on. This will reduce the stress on the fish and they won't go from a dark tank to a bright tank instantly.

At night turn the room light on and then turn the tank light off. Wait at least 30 minutes (or more) before turning the room light out. This allows the fish to settle down for the night instead of going from a brightly lit tank to complete darkness instantly.

Try to have the lights on at the same time each day. Use a timer if possible.

A Discus can be stressed by many things:

1)Being alone. Discus prefer to be in a group since it's a schooling fish.
It will be happier in a group.
However, if there is another more aggressive Discus(a bully) in the tank, the Discus will also get stressed.
Even though Discus need to be in a group, they often quarrel/fight with each other which make them stress from time to time.
If the fish doesn't look timid, is calm, relax and often come to the front of the tank, probably it's be ok.
Or it only shows the stress bar once in a while, then it's ok.
But it must not be showing the stress bar the whole day.

2) Bright light as what Colin mentioned.
All fish don't like bright light especially when the light is suddenly being turned on.

3) Tank mates.
Does the Tiger Barbs pick on the Discus?
Most Tiger Barbs are famous for being fins nipper.
Having some tank mates make it feel more secure but make sure that the tank mates are not too boisterous.

The following link is a must read for any discus keeper. It starts about 1/3 down the page and tells you all about the diet and habits of wild discus in the Amazon. It's worth a read.

There are some issues to keep aware of in this scientific paper (Crampton, 2008).

Just to get the taxonomy out of the way, there is no recognized species Symphysodon haraldi. This fish was originally described as S. aequifasciata haraldi by Schultz (1960). Kullander (1986) made it a synonym of Symphysodon aequifasciata Pellegrin 1904. This remained in Kullander in Reis, et al (2003) and Ready et al (2006). Bleher (2007, 2011) gave it distinct species status as S. haraldi, but this was not accepted, and Amado et al (2011) placed it in synonymy with Symphysodon tarzoo Lyons 1959. This is the accepted name (California Academy of Sciences, Eshmeyer's Catalog of Fishes, 2022). The Amado et al. paper is online free at https://www.hindawi.com/journals/ijeb/2011/360654/

The above has no bearing on the issue, but I like taxonomy and others may too.

There is considerably good information in this paper on the foods discus eat. We had a thread a few weeks back about this, and without question this is critical information on keeping these fish.

The group living behaviour however has to be very carefully read to avoid misunderstandings. Discus are what aquarists understand to be shoaling fish. They live in groups. From the study:


Discus form multi-cohort ‘colonies’ in galhadas, which appear to function as low-water refuges. The short dispersal distances indicated by mark-release data, coupled with the relatively small number of discus captured from newly constructed (‘artificial’) galhadas suggest that discus colonies are relatively static during the low water period. Discus were not evenly distributed among galhadas at the study sites. Instead, many apparently suitable galhadas (sheltered sites in 2 – 4 m depth), were devoid of discus or contained only a few specimens, while other, similar galhadas contained hundreds of specimens. These patterns suggest that discus actively form social aggregations, rather than simply fill available space [my emphasis].​
During the rising water period, colonies in the galhadas of lago Amanã disintegrated. Discus dispersed into adjacent flooded forests where they were thereafter observed alone or in small groups. The persistence of a sizable colony at one site in the Uxi bay throughout this study, and the return of a single tagged fish to this site over an 11 month period suggest that individual discus may routinely return to the same low water refuge from one year to the next.​
​
The formation of large, multi-cohort aggregations is unique to Symphysodon among Neo-tropical cichlids. Most South American cichlids live alone or in small groups but form breeding pairs and undertake biparental care of the eggs and young (Breder & Rosen, 1966; Lowe-McConnell, 1969; Goodwin et al., 1999). Aggregations of more than a few dozen individuals are rarely if ever seen in other South American cichlids (H. Bleher, H. López-Fernandez, R. Lowe-McConnell, pers. comms.). In the Tefé region, the only cichlid species other than discus ever seen in adult aggregations exceeding six individuals is the angelfish Pterophyllum scalare (Lichtenstein). This species forms groups of up to around 30 individuals during the low water period (Crampton, 1999c).​
The behaviour to disperse during the high-water period is not at all surprising. This is when the fish spawn, and brood care is much safer when there are no other pairs present. We all (I hope) know how angelfish pairs can tear each other to shreds, and other cichlids are similar. The inference to be taken here is that discus should be housed in groups the same as angelfish and other non-cichlid shoaling fishes, but provision must be made if successful spawning is expected.

I know I came across another paper on similar different group behaviours in a species of characin but I can't find it now.
Last edited: Sep 25, 2022

To your issue...discus need a group. It is simply not realistic that a lone discus will be "happy," since this is contrary to the behaviours of the species and these are in the genetic makeup and matter very much to the fish. Given the other fishes, some of which are inappropriate, it would be best (for the fish) to return the discus.

Tiger Barbs must never be housed with sedate fish. Things may seem OK initially, this frequently happens, but at some point the true nature of the barbs will take aim at the poor discus. Also, Corydoras cannot be housed with discus; the latter need higher temperatures than any species of Corydoras should be kept at permanently. The barbs should not be that high either. Temperature matters to fish because they are ectothermic and the temperature drives their metabolism.
J

I think bright light is an issue, or sudden change of lighting...
Try to add sun rise simulation into your tank...
You must log in or register to reply here.

My betta ripped my shrimp in half

6 minutes ago
Back in the fold