Maintenance: This species is notoriously sensitive to its environment: in open tanks with limited space and poor water circulation they tend to be shy and nervous; but if kept in a tank with swimming space and strong water movement, as well as plenty of floating plants for shade, they are bold, active and settle into aquarium life very quickly. Juveniles (up to around 15 cm) can be kept in tanks 100-120 cm in length, but bigger specimens will need more space. Very prone to jumping! Do not keep in an open-topped aquarium. Water chemistry and temperature are not critical but avoid very hard or very warm water; pH 6.0-7.5, 5-15 degrees dH, 22-26 degrees C recommended.

Social behaviour: A peaceful, gregarious predator. Wild fish live in large schools and this species must be kept in a group, not singly. Does well in community tanks provided the other fish are not too small. Avoid tankmates that swim actively at the surface of the aquarium as these are likely to alarm these rather nervous characins. Peaceful cichlids and loricariid catfish would make good companions.

Feeding: Prefers small live foods such as insect larvae, river shrimps, earthworms and of course small fish, but adapts very quickly to wet frozen foods including bloodworms, krill and small pieces of chopped seafood and white fish. Contrary to popular myth, these fish are not difficult to wean on to non-live foods: my own specimens were taking krill and chopped prawns offered on forceps within 24 hours of purchase. However, they generally do not accept dried foods.

Comments: This is among the smaller gar-like characins, and does rather well in captivity. Provided it is kept in a peaceful, fairly large aquarium and given appropriate foods it is quite hardy and easy to keep. A related species, Ctenolucius beani, is very occasionally traded; it is similar to Ctenolucius hujeta but has darker, typically mottled brown markings on its body. Ctenolucius are sometimes confused with Boulengerella spp., which are much bigger and rather more difficult to keep. 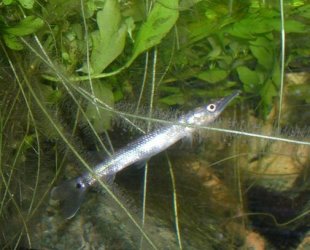 H
Would this 20g work as a sorority tank?

S
The best answer to why use antibiotics on BGA.