We have a winner in Tropical Fish Forums'
March 2021 Pet of the Month Contest​
We had 9 very cute pets entered in this month's POTM contest. But only one could win...

Circus
Let's all congratulate her 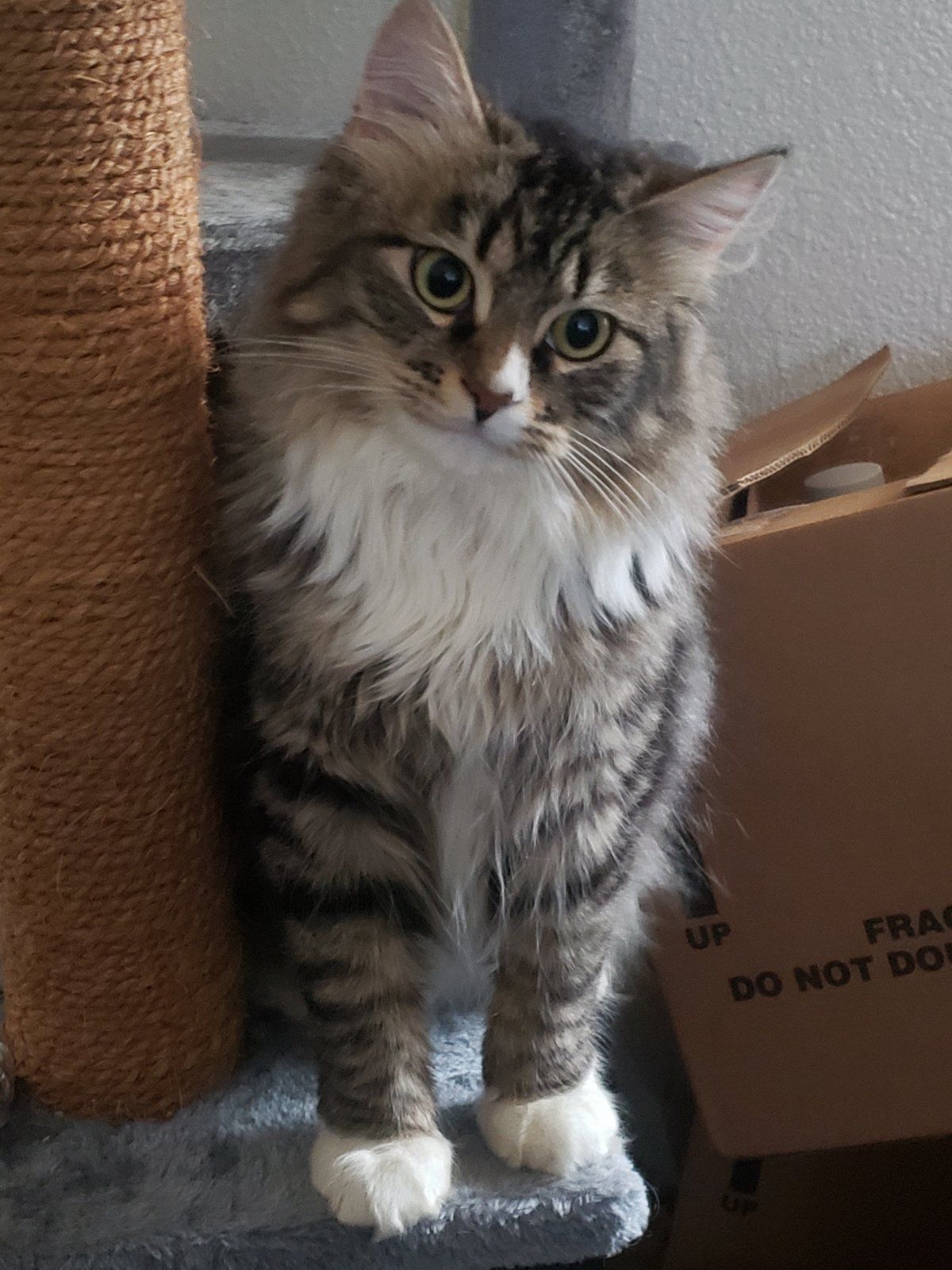 This is Crunch. We believe he is about 10 months old, and somekind of MainCoon mix, as he is growing large quickly.

I rescued Crunch on Thanksgiving Day, 2020. Thursday, November 26 of 2020. He weighed about 5 lbs, which was under for what we thought was about 6 months old.

Crunch was one of the "dumpster cats" at my work, and was born feral on the property. One could often see them launching themselves out of the dumpster when the rear building door opened. The bosses at work were getting ready to cull the ferals living on the property (which abuts to some woods and hay fields), so I decided to step up. On Thanksgiving I obtained a live trap and baited it with ham slices. It was about three hours before he showed up. After a difficult battle (where he earned the name Crunch) I got him into a box and home, where he has lived since.

Nowadays he is very affectionate and follows me around the house, becoming jealous of my fish and any attention I pay my other rescue, Mocha. It took him more than a month for him to trust me enough to pet him.
He still doesn't really know how to meow to get my attention, like his housemate Mocha, but he has an adorable squeek. He also will not let me pick him up yet, but does come when I call his name.
I feed Crunch Hills Science Diet, and the occasional can of wet food.
He is very good about the litter box, and is coming around to having baths (mandatory every month). He is neutered (on day 7 after rescue), and has his first nail trimming appointment next week. I look forward to that, because he hasn't learned to be very gentle when wrestling!

Congratualtion go out to Circus for her awesome entry of her cute kitty named Crunch. Great photo and well deserved win!
Coming in a very close second place is Abaddon with his colorful Milk Snake named Lancelot. What a great picture you took of your snake.
And in third place is Chimaera with her gray tree frog named Napolean. You took a very nice photo of your "smiling" pet frog. Good going, Chimaera.

For those who didn't win or didn't enter, we hope you will enter your pet in a future Pet of the Month contest. Our next one starts in mid May.

Our Tank of the Month contest for April has already started and will accept entries till April 6th. It will feature tanks sized at 17 to 30 gallons. If you have a tank of that size, we hope you enter the contest.
The contest thread is here:

Tank of the Month :big_boss: PLEASE VOTE! We have 6 awesome tanks entered in Fishforums' April 2021 Tank of the Month contest featuring tanks sized at 17 to 30 gallons. View all the tanks and descriptions below and then go to top of this thread and click on your choice for TOTM and then...
www.fishforums.net
Last edited: Mar 31, 2021

Thank you guys for the votes! I was pretty surprised when I checked the my email today.

Congrats! Not a big cat person, but a very cute and fluffy kitty.

Congrats! You cat is so beautiful! There is just such a cute, curious look in his eyes in that photo, and his little white paws! ? So adorable!
OP
OP

Your cat being part Main Coon mix, has intelligence in his pedigree. Main Coon cats are know for being an intelligent breed and they can easily be trained for obedience and pet tricks and are great at hunting. I can definitely see the Main Coon characteristics in the large paws and very furry appearance.
Last edited: Mar 31, 2021

Congratulations! You have a beautiful cat.

Congratulations @Circus! Crunch is such a cute cat.

Congrats, Circus. About time a cat won and yours is adorable!
You must log in or register to reply here.

V
How do you clean a tank that hasn't been cleaned in a while?

K
Off the chart Nitrite and nitrate readings