So a bit of a disclaimer first, before I get on with the topic.
These aquariums were part of a research facility which operated in Antarctica everything done there was carefully monitored and all had to fall within remits allowed by the Antarctic treaty and UK law. While I cannot divulge what these animals were being kept for I can explain the system and how these animals were kept alive.
What I do not want to get into here is the "use" of animals or ethics of scientific work with animals ect. I was involved in keeping these animals in suitable housing which emulated as much as possible their natural habitat during their time in my care. These animals would have been used for science and or education purposes in Antarctica and the UK, if that is something you disagree with that is fine, but the purpose of this is to bring images, work and experience that many people would not necessarily encounter in their hobby. I do not want this to become an argument regarding animal welfare.
With that being said, I am quite excited to bring this once in a lifetime aquarium experience to you guys, and if there are any questions I will try and answer in between my sections of information.

Now that I have said this I can get on with posting the fun stuff.

A friend of mine is in Antarctica ( South Pole station ) right now, spending 12 months there.
OP
OP

So a bit of background first.
The place where I was working was Rothera Research station on the Antarctic Peninsula (67S) Located in a place called Ryder Bay. It is the second largest island (Adelaide island) on the peninsula and home to two research stations Rothera (Summer and winter) and Caverhal (Chile, Summer only).

The area around the station encompass many different aquatic environments, from heavily silted areas in Hangar cove (see map) and high flow, rocky reef type areas such as those around the Leonie islands (see map). Within this area water temperatures fluctuate between just below -2C and+2C and there is a regular covering of sea ice during the Antarctic winter months.
Antarctic waters have the accolade of having the most planktonic biomass in the world, and the least planktonic biomass in the world. During the summer the water is thick with algae and zooplankton and just full of nutrients (lets just say high TDS!). In the winter, especially when covered in sea ice there is nothing and a diver can see (not literally) for miles!

So when keeping animals alive which are used to these sort of conditions It can be very interesting. The on site aquarium at Rothera was a flow through system for the most part. Meaning we pumped water out of the sea, into the tanks, and back into the sea. This allowed for some level of control in the aquarium. However pumping water between into cold air (sometimes down to -30) then into a warm building (+20) can make temperature control difficult. The aquarium room was cooled to about 1 or 2 which allowed for some stability in the water but if you can believe it keeping water cold in Antarctica was actually a struggle!
The transport aquarium (which was essentially a refrigerated shipping container with aquariums in) Was a self contained unit which would be attached to the salt water intake on station and on the ship, allowing you to change water directly with the ocean (something that can become a problem through the tropics. More later) but this system behaved more like a cold mobile fish room.

What I think I am going to do is now you have a little background, I will do a post on the animals which we held during my time there, with loads of photos! the work on describing a bit more of the day to day stuff and try to focus on the transport aquarium as that involved a little more work than the flow through main aquarium onsite.

NickAu said:
A friend of mine is in Antarctica ( South Pole station ) right now, spending 12 months there.
Click to expand...

Nice, with the NZ guys or the Americans?
I was at the South Pole in 2016 with for a few days.
N

I think the Americans, Wisconsin Particle Astrophysics or something like that.
OP
OP

Way out of my expertise, my sister is a physicist. But i think it will stick to biology, much more fun....

I know that, now, My friend told me, but thank you for confirming it, I can finally get some sleep.

But i think it will stick to biology, much more fun
Click to expand...

That might have something to do with the pyramid shaped thing they found down that way and which the world leaders have been visiting.
OP
OP

So time to start with a few fish 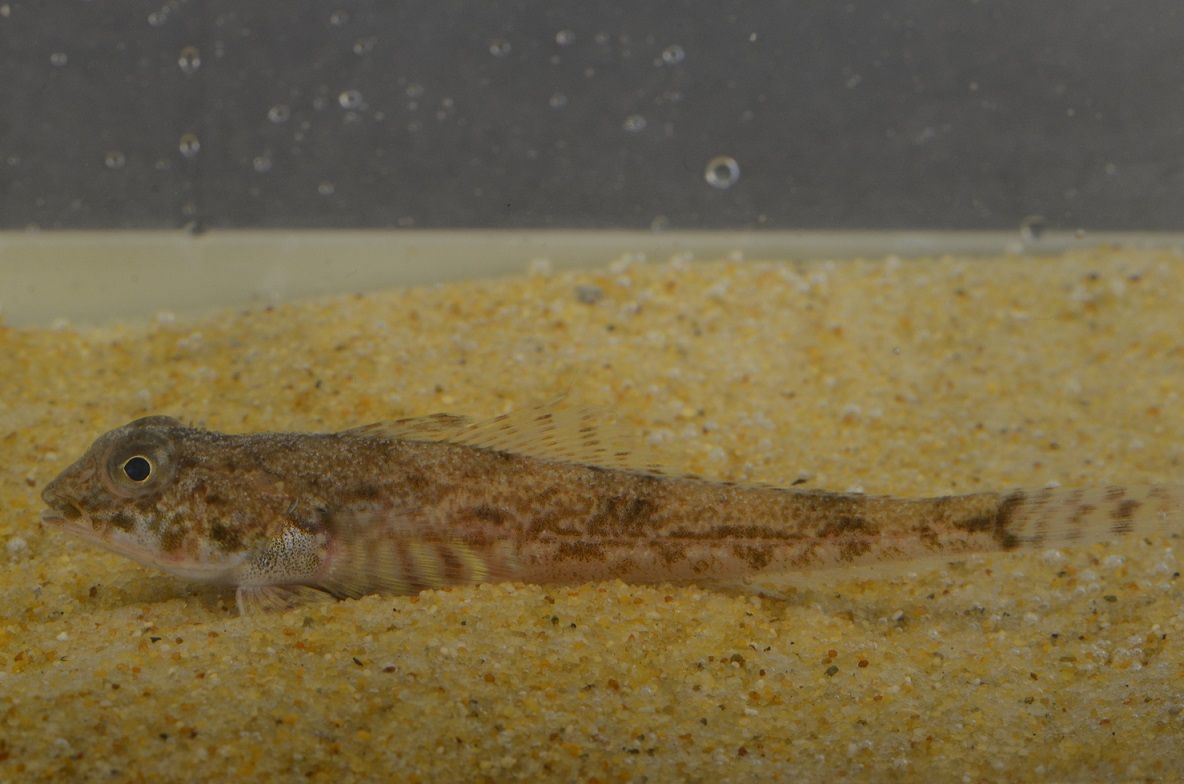 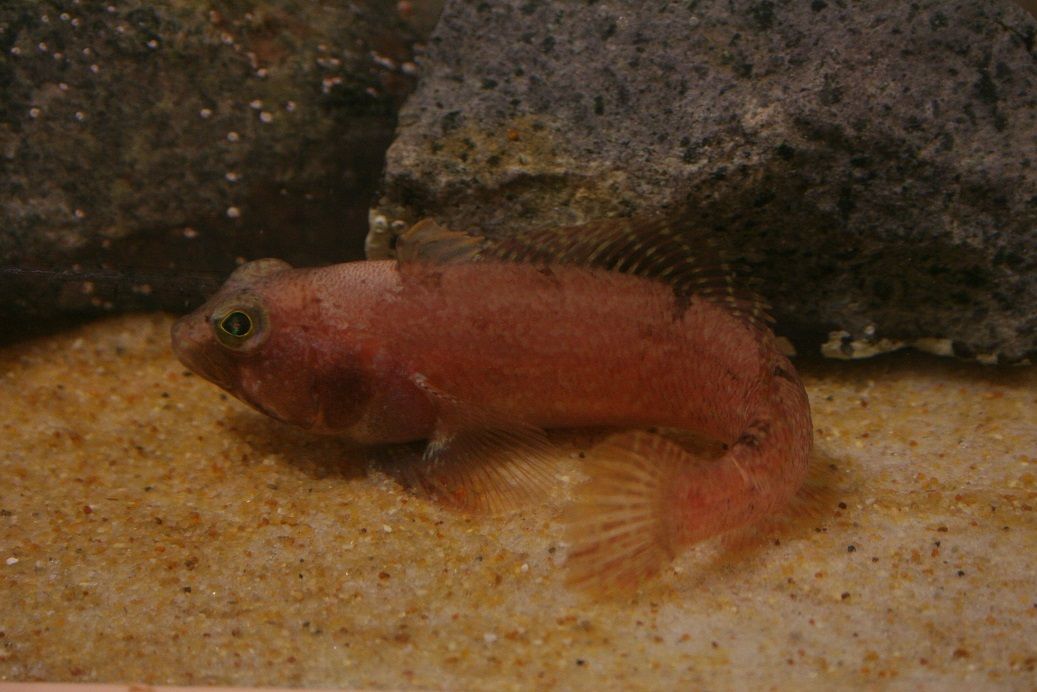 I don't really know what the species are, I did have it noted somewhere but I can't find it any more. 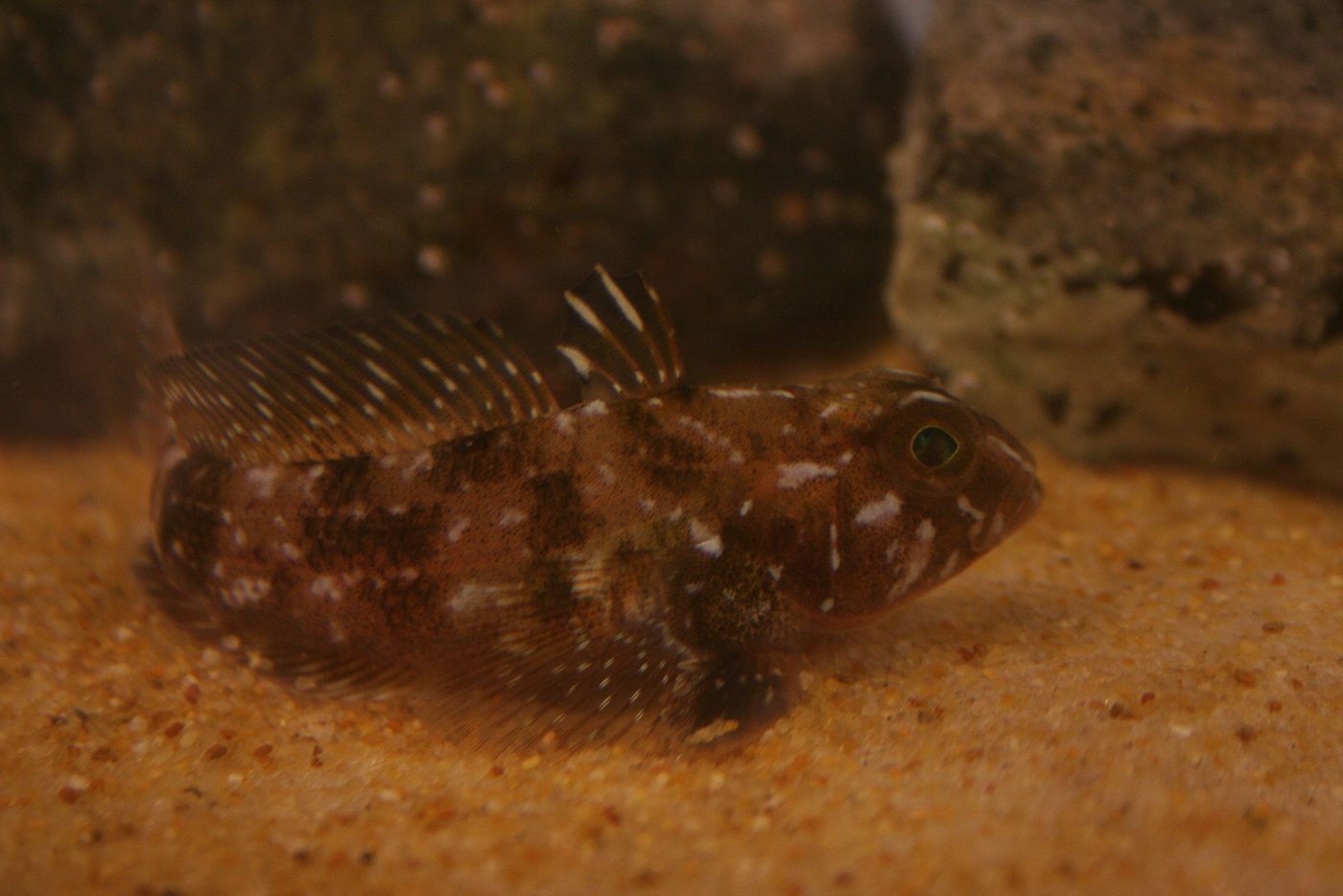 Bio luminescence is a really common occurrence in may marine species. I had a bit of fun with looking into what exhibits this. A lot of fluorescent dies don't work at low temperatures, and a scientist was looking into these compounds to see if they could provide one which does. 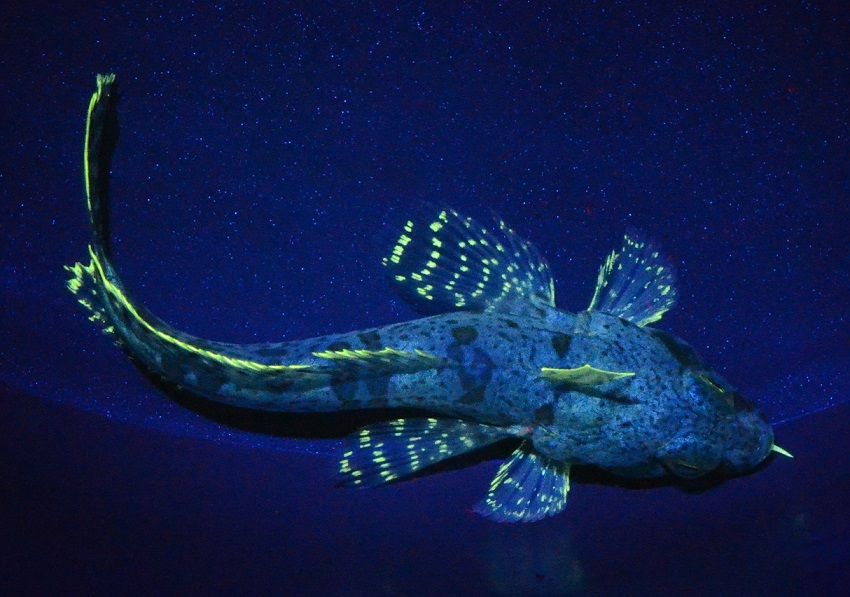 This is a common bottom dwelling fish, which was about 30-40cm long! 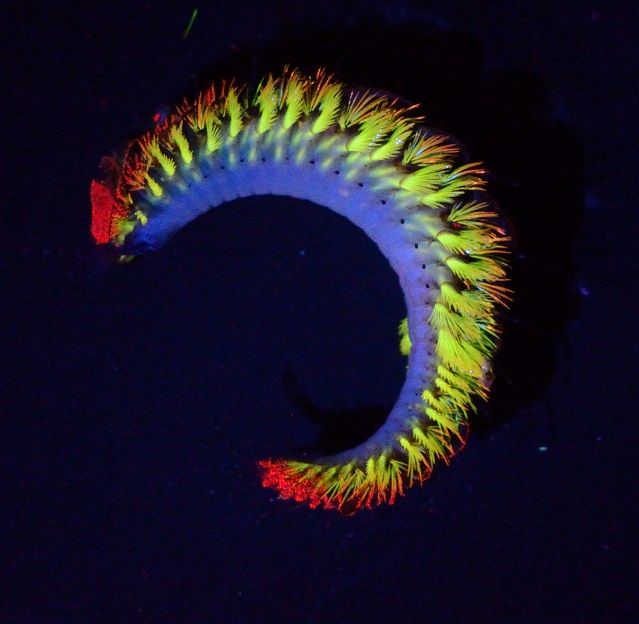 This was a common bristle worm which we found hitching a ride on one of of sea squirts. Great colouration!

In the first pic in post #9 the sand is a yellow colour. Is that the sand from the ocean at the Antarctic?

The second pic in post #9, red fish in front of a couple of rocks. The rock on the left appears to have pink dots on it, what are they?

Colin_T said:
In the first pic in post #9 the sand is a yellow colour. Is that the sand from the ocean at the Antarctic?
Click to expand...

No it was a bag of old aquarium sand that was shipped down in the 90's, we thought it would make a good substrate to take the photos on. there were no sandy areas by where I was living, it was mainly silty coves or near vertical rocky drop off's. The wharf that the ships moor up to if you walked 10m off it you would be in 100m+ of water for example.


Colin_T said:
The second pic in post #9, red fish in front of a couple of rocks. The rock on the left appears to have pink dots on it, what are they?
Click to expand...

They are not really pink, its just the photo and lighting, They are small spirorbid worms


Colin_T said:
The bristleworm in post #10 is pretty cool and would be popular in aquariums if they didn't need to be kept in the fridge and eat sea squirts
Click to expand...

Yeah, it behaved quite well in the aquarium at Rothera, although they did eat a lot!
N

That bristle worm is cool, I would love a few in an aquarium.
OP
OP

So, I thought I would add another instalment of this section.
So this is the transport aquarium 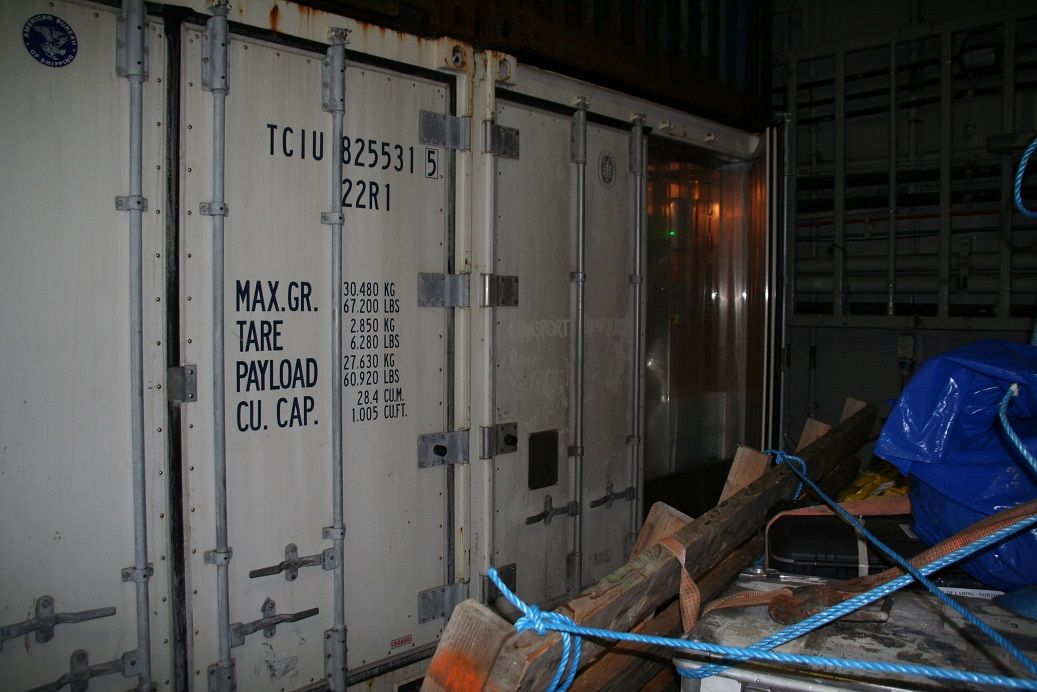 As I have mentioned previously, this was used to transport fish and inverts back to the UK from Rothera, It is a refrigerated shipping container, with 6 fish tanks in, and 7 large sump for water changes. It is hooked up to the ships water intake and outflow for enabling water changes. 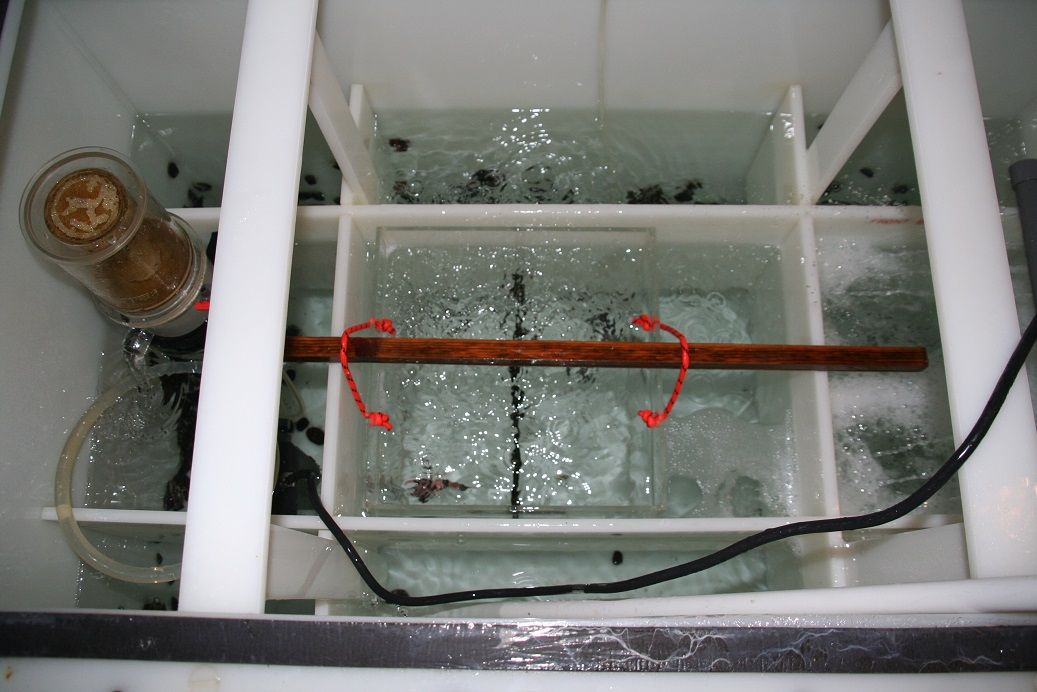 This is what each of the 6 tanks looked like, The baffles were used to minimise water movement, especially important when the waves are going over the bridge of the ship!
On the right is the spray bar outflow from the filter (Fluval x6) and the left is obviously is the skimmer.
Water changes were done by pumping water into the rear sump to cool the ambient temperature 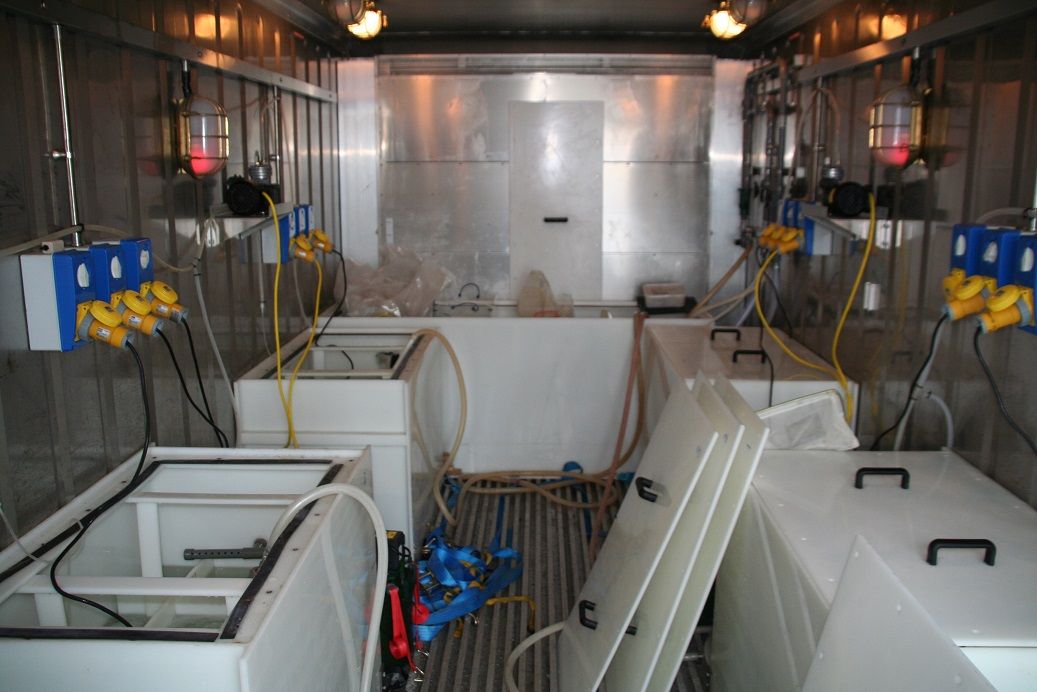 So thats the "sump" on the back wall, onflow comes in on the right where all the hoses are. ( this photo is a bit of a mess, but gives a good idea of the layout

What's the orange thing with eyes, and the black stuff?
You must log in or register to reply here.