ANOTHER KIDDIE POOL GUY WITH RARE FISH. The dregs of the hobby.

These guys want big bad fish..and offer horrific homes to them. Illegal in fact. Why the government allow fish that reach over 2' to be sold is crazy. Very few have the room or abilities to keep theses fish happy. At least make some vetting required. IF you DO have that mega tank and filter..
But another kiddie pool hell guy at work: 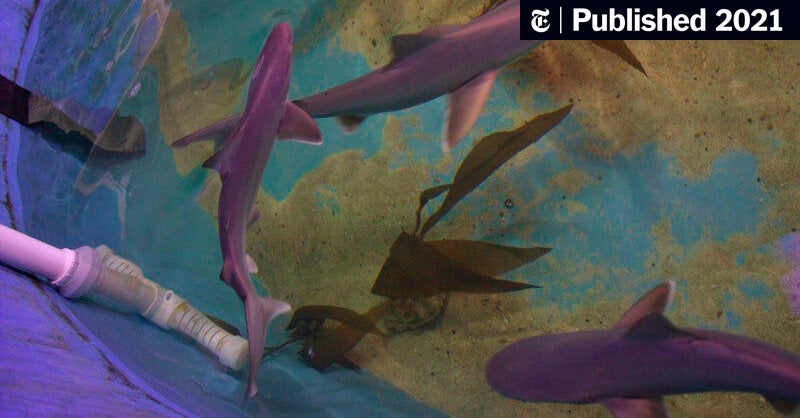 Investigators found seven sandbar sharks in an aboveground pool in a house in Dutchess County, the authorities said. The case spotlighted an underground market for exotic and protected fish.

That's horrible! I had no idea people would do this to sharks

Can't read the article without making an account, but the pool thing rings a bell.

There are some less than ethical fish tubers centred around Florida that keep fish in pools. One guy was even evicted from the house he was renting when the landlord discovered he had several kiddie pools in the garage full of fish. Guy was complaining on his channel about how unfair it was, and of course all the kids agreed it was so evil for his landlord to evict him over it... but they had no concept of the fire hazard complaint the landlord had, since this guy had dodgy strips of electrics and extension cords to run all the equipment, that were in no way up to code. All of those electrics, combined with several hundred gallons of water...

It was understandable why the landlord didn't want that yahoo on his property anymore, to an adult anyway.

It's not that bad. The sharks he had were small and in a decent sized pond for holding purposes. He also claims he made sure his buyers had the appropriate set up to house the fish.

It's interesting that even though they said it was illegal for him to take the fish and keep them in captivity, the sharks were sent to a public aquarium where they will spend the rest of their lives in captivity. Irony or Hypocrisy?

The big issue were the dead sharks and sawfish. Not sure why they died or how many other sharks have died in his care. That is a problem.

Should he be taking sharks and selling them?
According to the government, no he should not. But having said that, people catch and kill sharks all the time and nobody is getting fined for that. The Australian government has sharks nets and lines all around the coast and they regularly pull up dead sharks, rays, turtles and even whales. Other countries have similar set ups with similar results.

If the governments around the world were really serious about protecting sharks and other fishes, they would put a blanket ban on catching/ killing fish for a few years so the numbers could build up. Then have set bag limits on what you can take. They would also do something about climate change, pollution and people overpopulating the planet. Sorry guys, but those things are gonna kill the sharks in larger numbers than a few illegal collectors poaching some small ones for the aquarium trade.

The guy is a moron for driving without a license. That's where he came unstuck. Pulled over for a minor traffic offence and that lead to a much bigger crime being discovered. Most criminals really aren't that smart.

As for the $5000 fine, seriously, he probably gets that much for each fish he sells.
OP
OP
S

No,he was wrong when he kept those fish,why make excuses or compare apples to oranges?
Plenty of non endangered fish to keep, Colin.
The sharks are lucky to be in a spacious public aquaria with top of the line everything including a fish vet. How many other "prisoners" get a death sentence?
OP
OP
S

Back in the 70's I started with Kiddie pools and Goldfish. One thing about Goldfish? They are happy with just water and some food..grow thrive,spawn.
I sometimes wish I had stuck to that part of the hobby. No guilt!
G

I currently have a kiddie pool and goldfish. They are plenty happy there... Sharks in pools??? Ehhhh IDK.
OP
OP
S

It was just on the news that YouTube is being sued to stop animal cruelty video's. Out of nowhere I've been getting those vids and I see they get many views. Most of those must be the under 30 crowd.

When you say animal cruelty videos, does that include the videos of animals being rescued from bad owners who have neglected or mistreated them?
Because there are lots of videos showing animals in awful conditions but they get rescued and rehomes.

I had a mate who had a giant Gourami in a swimming pool in his basement, happy as. At least the fish had lots of space to swim.
OP
OP
S

No just animals being killed for views and $$$$. I doubt a rescue would be included.
You must log in or register to reply here.

My yearly trip to petco