I posted something similar earlier but I think I made it too complicated.

I have two tanks that show ammonia levels of 8.0ppm - obviously enough to kill the fish yet all are doing fine. Why? Because I add Seachem Prime every other day and sometimes AmGuard as well. These chemicals convert Ammonia (which can kill your fish) to Ammonium which will NOT kill your fish.

There is another kit you can purchase that will show you how much active ammonia you have in your tank vs Ammonium. When I run this test it shows Ammonia levels as zero ppm yet the API kit for Ammonia still shows ammonia as 8.0 ppm because the API kit doesn't tell the difference between Ammonia (toxic) and Ammonium (non toxic).

What is so frustrating is that every day the water still registers Ammonia as 8.0 on the API kit. The other test kit is a bit tedious to run so I do that ever so often and the Ammonia always zero. It's the harmless Ammonium that is showing 8.0 PPM. What is really weird is that even large water changes may drop the API test kit to showing Ammonia as 4.0 instead of 8.0 but within a couple of days it's back up to 8.0. Again - it's REALLY showing Ammonium but it can't show you the difference.

So for you chemists out there - how do I get rid of the Ammonium in the water so my API test kit shows what is truly going on - that the Ammonia levels are actually zero NOT 8.0? In other words I want a "reset" of the ammonia readings in my tank - otherwise I fear I'm actually overtreating my water. I get really tired of seeing that 8.0 reading even though I know it's likely ammonium and NOT ammonia.

The only thing I can think of is that the Ammonium needs to start converting to Nitrites - which it is not - Nitrate levels run from zero to .25. Does Ammonium convert to Nitrites or just Ammonia?

ALL these tanks were extremely well cycled with Ammonia before fish were ever added - it's so frustrating to see that those test results are now all messed up and invalid with regard to Ammonia, I find a LOT of things on the Internet about the Ammonia vs Ammonium issue but none of them tell you how to get rid of Ammonium so your API tests show the actual rating of zero Ammonia.

Help - nobody has responded to my question - doesn't anybody have ammonium/ammonia issues? How do they show on the API kit that there really isn't any ammonia in the water - it's just ammonium which is not harmful?

You cannot remove the ammonium and leave just ammonia in the water. Ammonia and ammonium are in equilibrium.

If it were possible remove ammonium, some ammonia would convert to ammonium to keep the two sides of the equation balanced.

If your ammonia reading increases it is because the fish - or something else in the tank - are making it. Just to check - you don't have one of those soil substrates that release ammonia for months?


Virtually all our ammonia test kits are the salicylate test which cannot distinguish between ammonia and ammonium. The results are ammonia and ammonium combined.
You can find out how much of the API ammonia reading is ammonia and how much is ammonium by using this calculator https://www.hamzasreef.com/Contents/Calculators/FreeAmmonia.php Set salinity to zero and fill in the other boxes on the left side with your results. The number you want is NH3 concentration on the right hand side. A value of less than 0.02 ammonia from that calculator is the aim. The lower the better.
If the other test kit is tedious to use, this calculator is easier.

As @essjay says they are the same thing and both will convert to nitrite. If your reading is going up in the tank you need to fix the cause. Either your filter is no longer cycled, you are still overfeeding, or you are overstocked (or any combination of those 3). Binding an extra H+ is not a long term solution. Products like prime and amlock are useful as an emergency solution but unless you can find a way for your filter to deal with the waste you will keep having problems.
OP

First of all - with the calculator - where do I get salinity values? And to get separate values for NH3 and NH4 would require that I run the other test I've been running, NH3 is always zero - it's always all NH4 (although I only do this about once per week so there could be NH3) - so if I need separate value then I might as well run the test that tells me how much Ammonia vs Ammonium that I have in my tank and skip the calculator.

I agree it's still my problem with overfeeding. Maybe overstocking - but I don't know. For example, my 5 gallon tank had 5 raspbora's in it (very small fish less than 1" in size) and that's the one that consistently had Ammonia values of 8ppm and never any Nitrites. I barely fed them because they are so tiny they don't need much food. The tank was beautifully cycled with ammonia and I went through 7 rounds of ammonia until I could get zero ammonia overnight for 3 days in a row. Then I added the fish. So what the he** happened? It started with just ammonia levels of 1.0 and progressed slowly to 8ppm. With multiple water changes I can get it down to 4 ppm. Nitrites are always zero. Nitrates are around 5. No fish have died (I treat the water with Prime and AmGuard every 2 days) and they appear to be super healthy. How did I lose my cycled tank with the addition of 5 very small fish?

The other tank that consistently has 8 ppm is my newest tank - again about 7 treatments with ammonia and then 3 days in a row with zero ammonia levels and conversion to nitrites and nitrates. There are a large number of fish (28 in a 29 gallon tank) but the water is never cloudy. Well over 2/3rd of the fish are 1" or smaller - but I'm probably still overstocked. Because of the variety of fish (some are herbivoures, the rest carnivoures) I have to give them different types of food. I also add algae wafers since some require algae in their diet. This could easily lead to overfeeding. I've been doing 50-75% water changes twice a week ever since I started getting Ammonia readings of 8.0 ppm - it's NEVER gone down and it's never converted to Nitrites - so my once beautifully cycled tank is suddenly no longer cycled. I guess I need to read up on how to cycle a tank with fish in it (I've never tried that before).

I use Seachem substrate - a clay based substrate. Any time I see excess food left over the next day I siphon it out before adding fresh food - I also pay attention to what is getting eaten and what is not so I know what not to feed so much of.

My other two tanks consistently have Ammonia levels of 2.5, sometimes I can get it as low as 1.0. Our tap water in the city has 1.5 ppm Ammonia so every time I'm doing a water change it adds more ammonia to the tank. I do a 50-75% water change once a week on these tanks. All I ever add is prime. (which I would do anyway with a water change). Because our tap water averages 9.9 ph and I need 6.8-7.2 I have to bring down the PH immediately because every time I do a large water change the PH goes to 8.9 (the highest my kit will register). I use PHdown over a period of 3 days to get it back within parameters, by then it's nearly time to do another water change and the whole PH problem starts all over again. I can't help but think that my City water is contributing to my Ammonia and Ph issues.

I'm looking into getting a portable R/O system but I'm not really sure what I'm doing. I've read it takes all the KH and GH levels out of the tank and that - like with distilled water - you have to remineralize it. I know from biology classes that people should never drink distilled water because the lack of minerals can actually dehydrate you. Not sure if the same issues apply with R/O water. I can't go buy 80 gallons of water at Walmart or the fish stores because I am disabled and can't carry more than 2-3 gallons of water at a time - 40 trips to the car doesn't sound to appealing, then another 40 trips from the car to the house (taking a five minute break each time to catch my breath - I'm on oxygen 24/7) sounds pretty horrifying to me. Plus my little car wouldn't even hold 80 gallons of water without a major disaster happening. And I rarely drive due to the medications I take. So that's just out of the question.

I thought this would be an easy hobby and a good way to slowly build up my strength (and it has) but it's becoming more than I can handle some weeks especially when I see no results.

If you think R/O water is the answer (I rent so I am not allowed to do plumbing changes to the house) then let me know what would be in store for me physically and if this is a realistic option. I have old style faucets so I don't think I'd have a problem connecting it but my sinks don't drain well (they're 60 yrs old) and too much water tossed out could cause an overflow on my sink. That's why I can't use the Python any longer - running water full blast to get the suction I needed caused a major overflow in my sink because I was busy down the hall cleaning the tanks - I never want to mop up 5 gallons of water again and it wasn't good for my hardwood floors either.

Again thanks for at least replying and giving me some ideas.

Jan Cavalieri said:
First of all - with the calculator - where do I get salinity values? And to get separate values for NH3 and NH4 would require that I run the other test I've been running, NH3 is always zero - it's always all NH4 (although I only do this about once per week so there could be NH3) - so if I need separate value then I might as well run the test that tells me how much Ammonia vs Ammonium that I have in my tank and skip the calculator.
Click to expand... 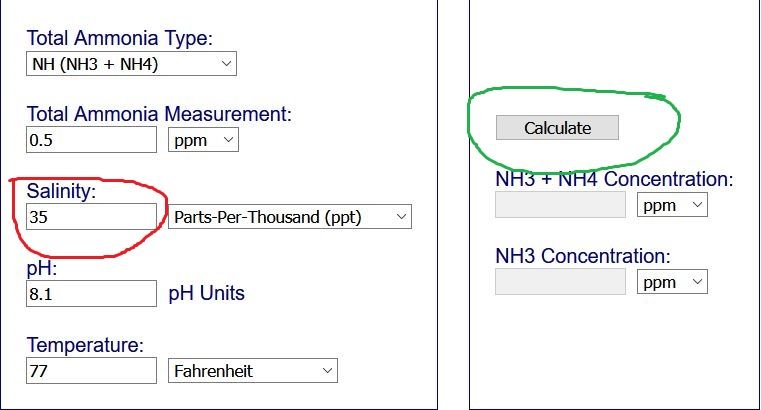 On the left side, leave the 'Total ammonia type' box as it is
In the 'total ammonia measurement' box, change the value to the reading from your API test kit
Change salinity to 0 - I've outlined the box in red
Change the pH to whatever your test kit says
Change the temperature to what your thermometer says, and make sure you have the right degrees, Fahrenheit or Celcius/centigrade.

A moment ago
JuiceBox52

Goldfish trying to jump out of tank??

I think my otos are mating...!