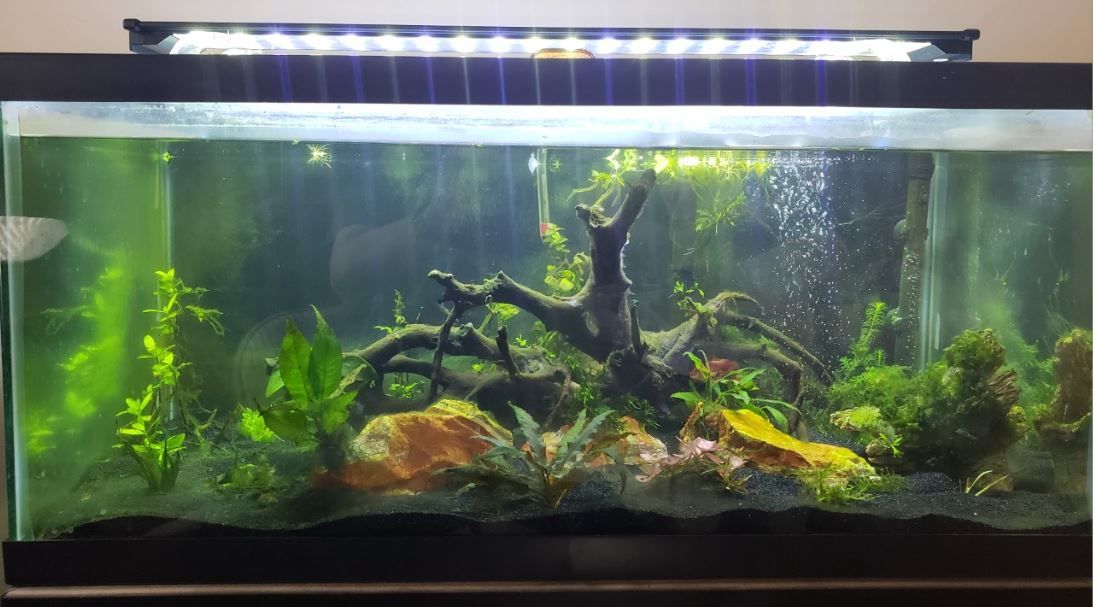 I'm currently doing a fishless cycle on this 40 gallon breeder freshly planted aquarium. Could you guys look over the stocking plan and see if it is alright?

Also, would the Platies show aggression between the males or would they be okay? If there could be aggression, does anyone know a way to purchase virgin female Platies, or are those pretty impossible to find? I know all the pet store females near me are kept with males, and will be storing sperm from pet store matings and overpopulating my tank with fry if I were to get females from there.

Also, would it be okay to keep all male Cherry Barbs? Because I just really like the male's coloring best, and since they need 2 females per male if mixing sexes I would have a fair number of less than colorful fish if I got a mixed sex group.

The plants still have a lot of growing to do, at some point the back should be lined with them. Oh, and that Spiderwood has been very thoroughly boiled so it shouldn't leach any tannins. The pH will likely be slightly alkaline (around 7.4 roughly) and moderately hard (8-10 dGH), and a heater will keep the temperature within everyone's ranges.

Right now it is filtered with just an Aquaclear 70 filter, adjusted to lower current a bit. Is that alone adequate filtration? I was thinking of also adding a Polar Aurora 3 Stage Canister Filter with 9 Watt UV sterilizer. Has anyone heard if that canister is a good filter or not?

I would leave the platies out, primarily because the GH is lower than they should have and there is no point in introducing a species that is going to be struggling, it can make other issues for fish.

I would also leave out the gourami. Generally, gourami and cichlids do not mix well because both are territorial. And I can assure you that a male Bolivian Ram will consider this entire tank "his" space. Which is fine for the other species mentioned, just so you know.

The Cherry Barbs should be mixed gender. In a group of 8 with male/female, the males will be more colourful and that is worth it.

Filtration. You do not need or want too strong a water movement for these species. My 40 gallon tank which has 40-50 fish in it only has a dual sponge filter. I don't see a need for a canister. I am also not a fan of HOB filters because of the flow but if this one has a control that may not be an issue. There is no benefit to UV in freshwater.

Are there algae issues, or is that just the photo? Nice aquascape, but I would shift the wood either left or right so it is off centre; this always gives the visual aspect of more space. A second branch or a standing chunk of wood representing a tree trunk could go in the open area either side depending where you move the wood. Off centre hardscape can also change the fishes' swimming patterns, interestingly.

You mention fishless cycling...with the pl;ants I would not add ammonia. This may be the algae issue, or not. But it is possible to poison plants just as fish from high ammonia and I never like to risk it.
OP

I have been taking into account that very high levels of Ammonia can be toxic for the plants, and have been adjusting the ppm Ammonia I put in so that I didn't add too much at once, and now the beneficial bacteria are getting strong enough that they can quickly lower the levels and I can add in more with no apparent ill effects. So far it seems to be working and the plants are not showing any signs of distress and are gradually growing. I'm keeping a careful eye on them. I am getting a lot of algae though from the cycling process, which I've been removing manually when it gets too bad. Except I'm leaving some on the wood for when I get my Ancistrus. I've heard Spider Wood is one of their favorite types to eat, and I'm hoping he'll especially enjoy his spiderwood/algae meals for awhile after I get him.

It didn't even occur to me that the Honey Gourami and the Bolivian Ram might not get along, since I've had the same combination in my 75 gallon. (I'm moving some of the fish from my 75 gallon to this tank). They've always ignored each other, even when right next to each other when the Honey Gourami will go down there for food. I guess that's the difference between a 75 gallon and a 40 gallon breeder.

Could I bump up the gH a bit by adding aragonite sand/crushed coral/calcium carbonate in a filter baggie for the Platies, or would that make it harder than the other fish would care for?

Akeath said:
Could I bump up the gH a bit by adding aragonite sand/crushed coral/calcium carbonate in a filter baggie for the Platies, or would that make it harder than the other fish would care for?
Click to expand...

No, don't do this, it will not achieve it anyway. Adding aragonite, dolomite, crushed coral, or similar will raise the pH, quite rapidly in my experience, but not increase the dissolved mineral so the GH remains where it is. I used to do this (2-3 tablespoons in the canister filter) to maintain a pH in the mid 6's but it had no effect on GH. And livebearers need mineral in the water in order for their physiology to properly function.

Second point though is, why make life difficult for all the other fish mentioned, just to try and have platies? The other species are soft water, and a GH of 8 is OK, but best not any higher. If you can get the pH below 7 it will be better still for these fish. And I don't mean start messing with parameters, I mean if it lowers naturally as it might, no problem.
OP

Can't argue with that.

I've moved recently within the same general area, but have changed water companies. So I think I should double check and make sure the water here is the same as what I'm used to dealing with. I'm going to try and get a new gH/kH test kit tomorrow. Mine is several years old by now, and I want to make sure it is accurate before finalizing the stocking plan. I also just set out some tap water to gas out so I can double check the pH tomorrow as well, since I think high Ammonia levels can sometimes make water more acidic so I don't know if the tank water would give an odd reading or not. That's why I just gave estimates.

After I get the exact readings I hope you can suggest alternatives for anyone in the stocking plan that wouldn't thrive. I don't want the fish in my care to have a difficult time.
OP

Okay, I have the exact readings now.

Akeath said:
Okay, I have the exact readings now.

My suggestions in post #2 still apply, with the exception that platies should be OK with the GH above 10 dGH. However, I still would not personally add livebearers. I've been trying to think of how to explain this...it is just that livebearers do not suit the other fish you have.

I'm now thinking that I would like to wait on the Platies and experiment a bit by adding some Indian Almond Leaves and possibly more Spider Wood to add some tannins to the water and see if the other fish seemed to thrive more with that addition. The tannins would presumably lower the pH and hardness somewhat, as well as being a natural part of the habitat of the fish in question. If the fish seemed to have positive effects from that, I would just not get the Platies, and probably just up the numbers of the other fish.
Last edited: Jan 8, 2019

The extent to which wood and/or leaves [i.e., organics] might lower the pH depends upon the KH (carbonate hardness or Alkalinity) because this serves to buffer the pH preventing fluctuations. The KH is not mentioned in this thread, but given the GH is 11 dGH I would assume the KH is comparable, which is usually the case though certainly not always. But depending upon the KH, the pH may or may not lower. That won't affect the benefits to the fish of leaves and wood.
OP

In my area anyway, the kH has always been considerably lower than the gH. My hardness kit came with both kH and gH test kits, so I did a few tests just now. The tap water came out as 5 degrees kH, and the tank itself came out as 3 degrees kH.

Akeath said:
In my area anyway, the kH has always been considerably lower than the gH. My hardness kit came with both kH and gH test kits, so I did a few tests just now. The tap water came out as 5 degrees kH, and the tank itself came out as 3 degrees kH.
Click to expand...

That may or may not be enough of a buffer to affect the pH. The fact that it is lowering within the biological system would suggest little if any buffering long-term, but I am not a chemist so this is just a suggestion.
You must log in or register to reply here.