This thread is much much overdue, but I am happy to report that good progress has been made!!!

A few of you probably remember the first shots of the tank: 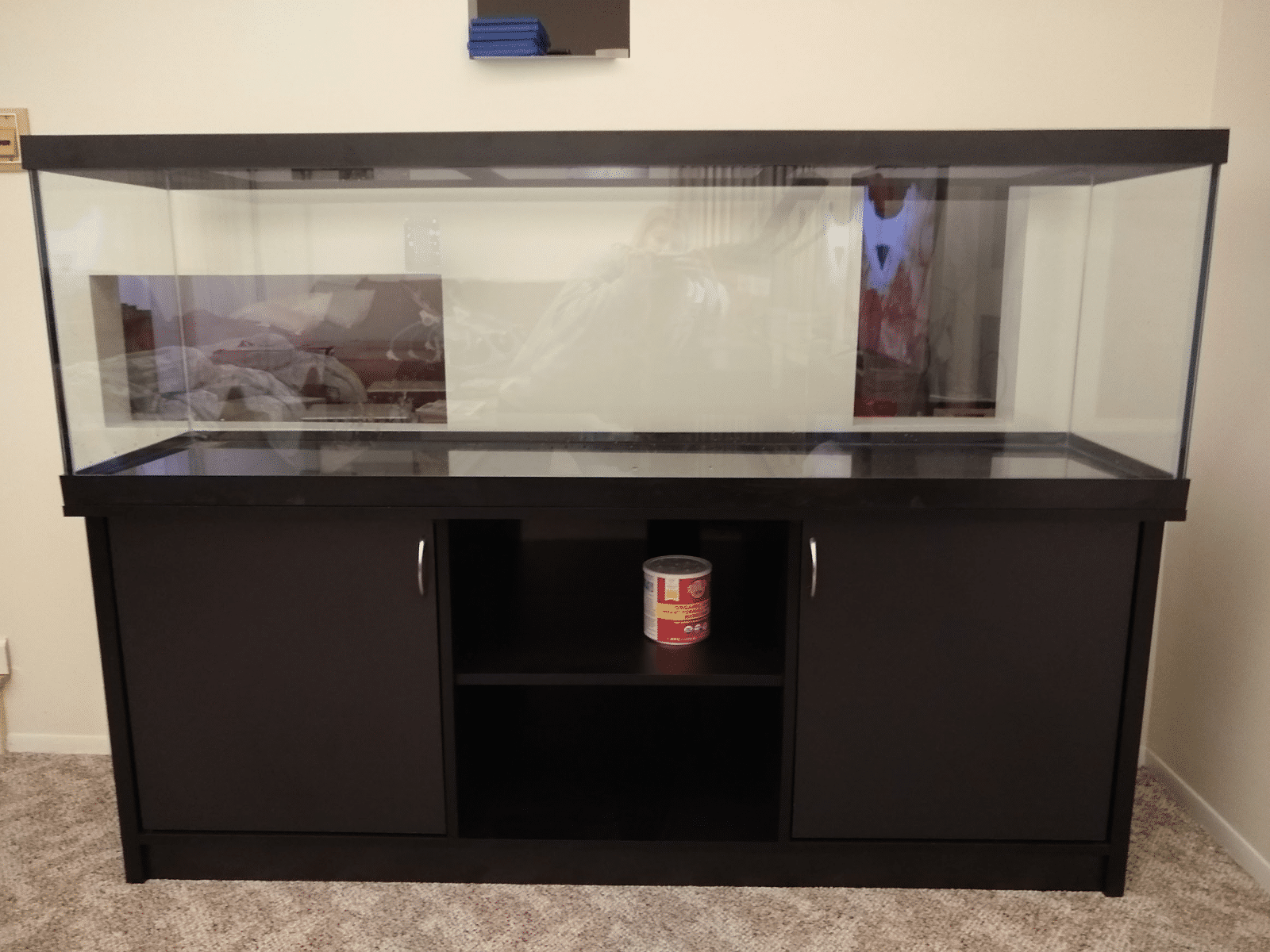 Nice overall, but far from level! We ended up shoving a couple of carpet squares under the front corners - I was hesitant to get wood shims since the stand is particle board and I didn't want to torque it too strongly, but we had some carpet samples laying around and it turns out that was just the recipe!

Once the tank got leveled and filled, it was time to sink some driftwood! Hubby found me a nice birthday present of three pieces of wood for $100 on FB marketplace, so that was pretty cool!! Note ugly carpet squares that have yet to be trimmed under the front corners of the stand, but at least the water is now level haha 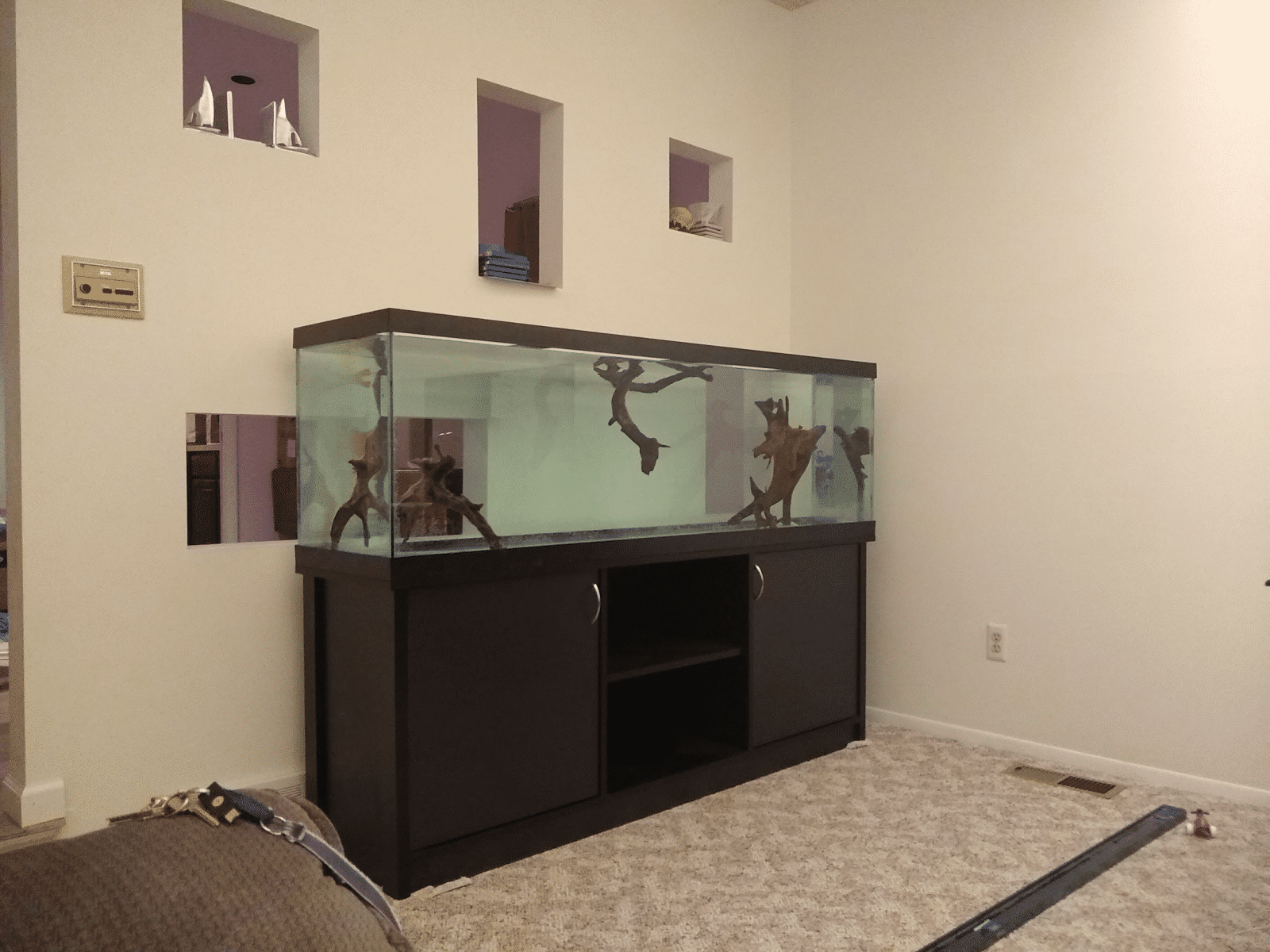 A week or two later, sand and another honker of a driftwood piece that had been sitting out in our yard in a barrel of water went in. 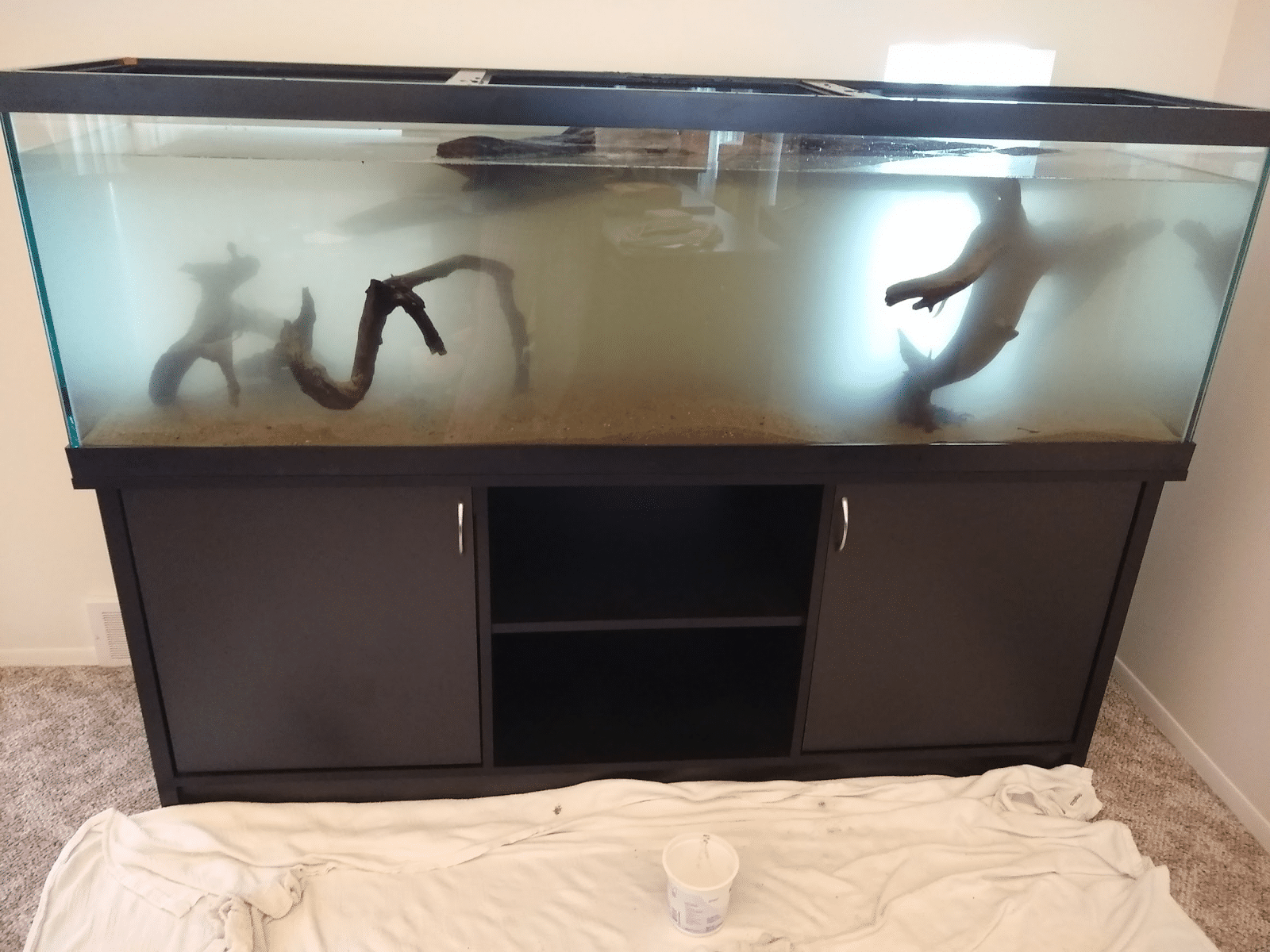 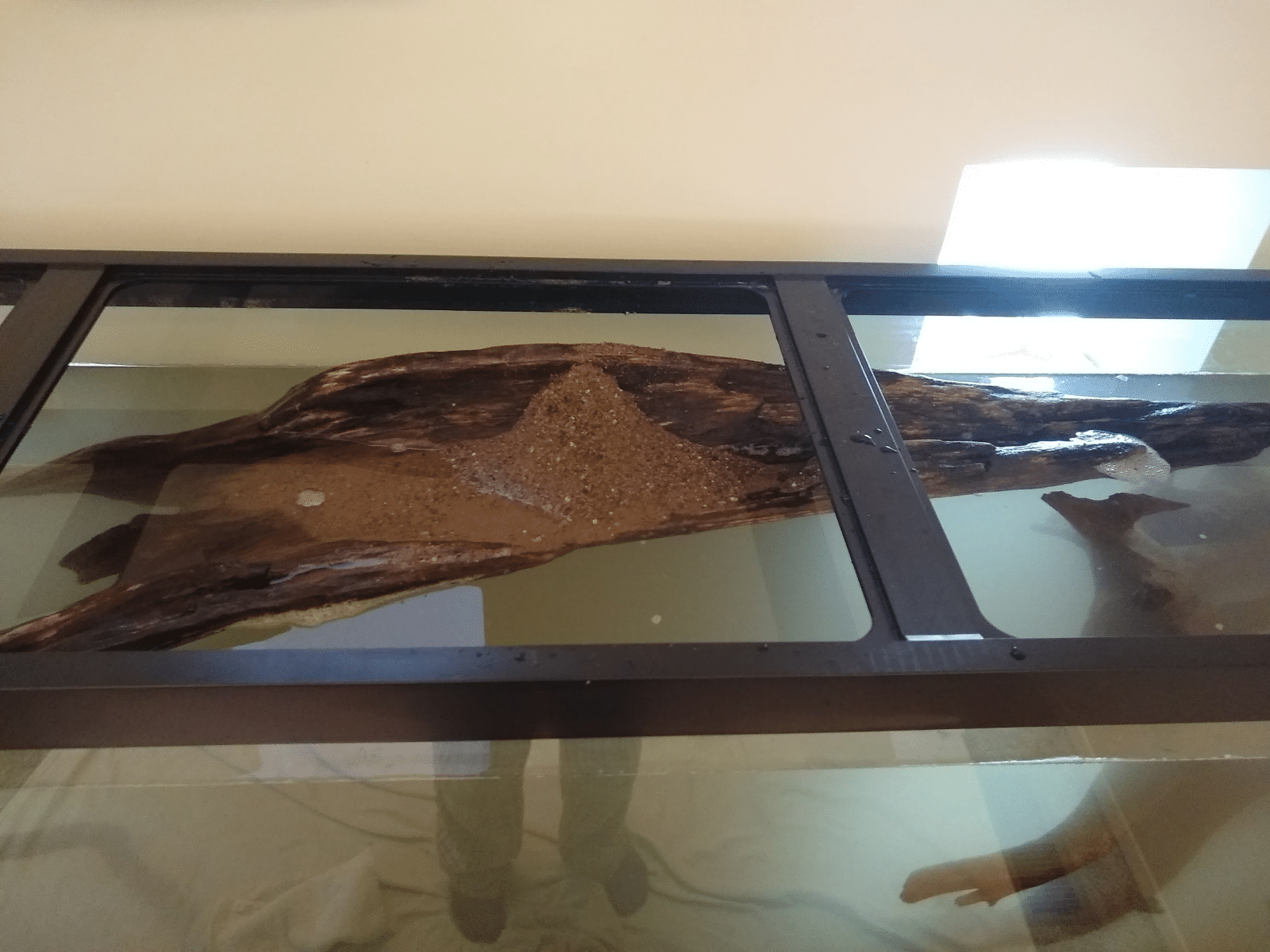 Eventually, we just piled a bunch of rocks on it to make it sink, and that's how it stands to this day haha. 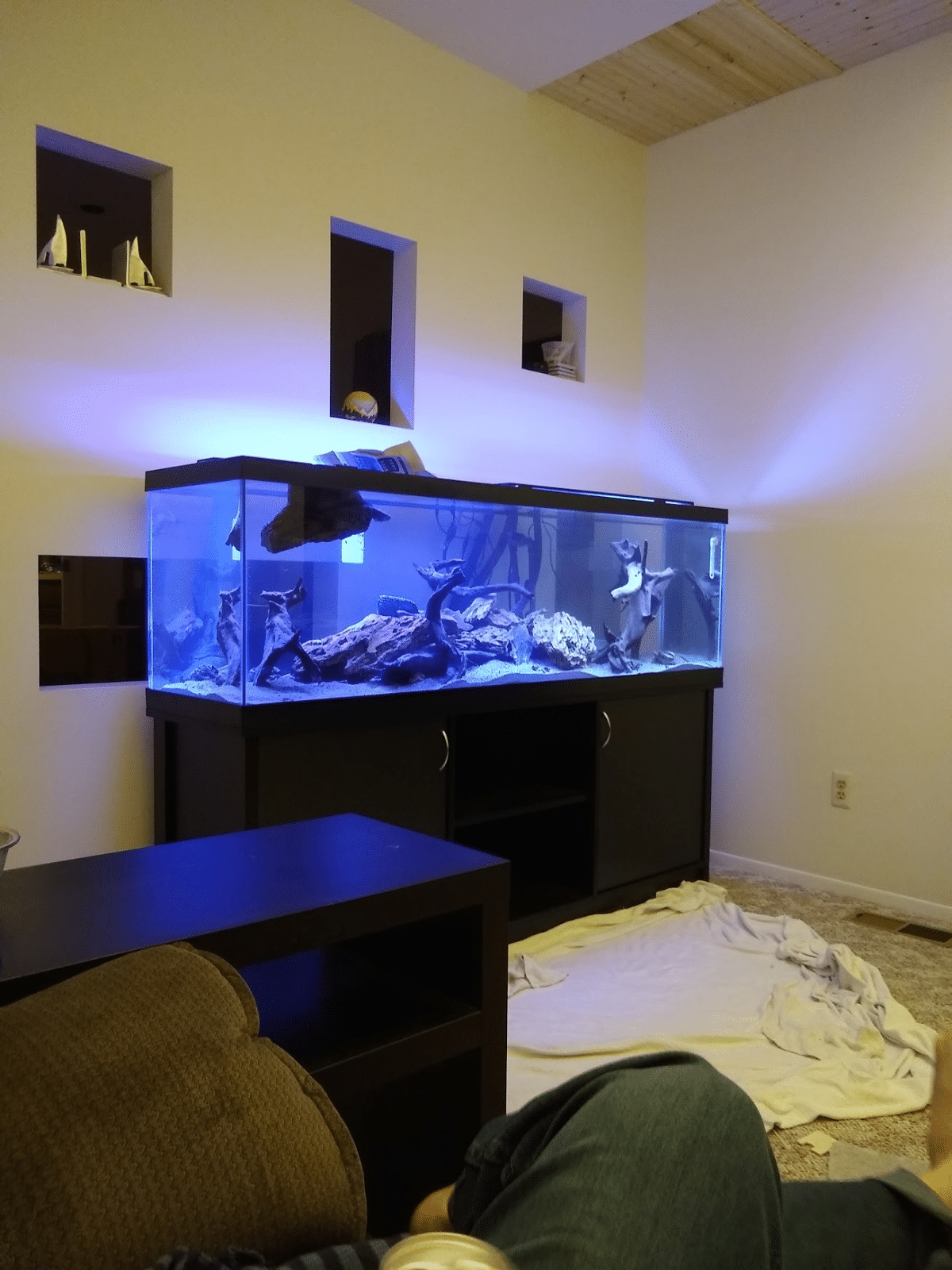 This is a not great picture of the tank and scape before we added plants. I had gotten a FX6 on a black Friday sale, and unfortunately when we set it up the first time the noise was unbearable. Must have been some issue with the impeller or something. Fortunately Petsmart let me do an exchange for it even though it was March by the time we were setting up the filter, so I am very thankful for that. The new FX6 is a lot quieter.

I don't have any more recent pictures of the tank apparently, but some plants from the 20g moved into it, and the black skirt tetras that ended up being in quarantine for almost three months were relocated to the 125 about three weeks ago! They were amazed when their digs got bigger haha.

I'll have to post some more recent pictures soon, but this was basically the beginning story! The saga started, oh my gosh in October or November of 2020? Water finally went into the tank in January 2021, and the fish moved in at the end of March. We now have cories and two firemouths in quarantine in the 20g as of yesterday, so those will be the next addition!

Nice! I can't wait for the planted pictures.

Cain’t wait to see how it looks in the wall! Tanks that are in the wall are super cool, especially when you can see through to the other side. ?
OP
OP
M

Sure I can take a couple of pictures from the other side too! The tank is in its final location, but it's kind of cool to see through the tank from the kitchen to the den! The two rooms are at different heights, so when my so looks into the tank from the play room, everything is at his eye level which is neat. Scaping it was a bit tricky because there is so much viewing area, so figuring out how to hide hardware etc was a bit tricky. I'm thinking of putting a black background in the middle section so you don't see the cables as much, but that remains as an item on the todo list thus far....

You might be able to find a way to put them up on top of the tank, down the side, and into the stand somehow, so you don’t see them from either side. (You might have to drill a hole in the stand, but it’s your choice - just a suggestion. )
OP
OP
M

All the equipment is inside the stand, but the lines have to travel from the stand into the tank one way or another. Because the tank is open on virtually all sides, the only place to travel the tubes and wires is along the middle back wall. With the wall being white and the tubing being black, it shows more than if there was a black cloth on the wall for example. It's something I'm thinking about but with how busy I've been lately I'm honestly just happy that the project is making any forward progress lol
You must log in or register to reply here.

should i use fertiliser

Art I've Been Doing for Sale