Anyway, yesterday i had to enter the walls of a pet store for bird food. While the daughter got her RSPB approved stuff?? I wandered around the condemned souls in the fish section and there in one of the glass prisons were 6 to 8 wood shrimp.

I have been thinking of maybe some amano shrimp, there is certainly algae on my slower plants for them to eat but these wood shrimp have really stuck in my mind.

Could they share 350 odd uk litres of moderately planted with a rtbs a bn and 10 or so harlequin tetra. Tank has been running for 6 -7 years and pretty consistent after a few missteps when i started. My bad, did not fully appreciate the added commitment of a large tank when we upgraded.

From what i can find it looks like it. I have a (slightly irritatingly) steadily increasing assassin snail population so i figure the copper worry is irrelevant.

If practical how many would work in my tank, i have a powerhead near some bogwood so water movement is good. I understand some rocks would be advisable.

How many would people recommend, would i still be ok with a complement of amano shrimp too, if so how many would you reccomend. I think cherries might be a bit small. Although any young would supplement the harlequin, greedy beggars.

I have aimed to be at least in the right continent with my tank, aimed for a section of thai stream (RTBS habitat was the theory) and these guys fit that general line.


Otherwise its 0/0/ with a little nitrate 10-20 as far as my eyesight can gauge . Same figure is in the tap water.

If these are the shrimps you saw, they are not algae eaters; they filter micro-organisms out of the water. They are very difficult to feed in the average tank.


If the ones you saw are not these, have a look through the site I linked to and see if you can identify them.

I would prefer not to have them because:

1. The get up to 2 1/2 inches
2. They could easily gobble up beneficial microorganisms
3. I agree with essjay. You cant just sink some flake food and expect them to eat it. To feed requires a pipet to direct food and very small food items.
OP
OP

If these are the shrimps you saw, they are not algae eaters; they filter micro-organisms out of the water. They are very difficult to feed in the average tank.


If the ones you saw are not these, have a look through the site I linked to and see if you can identify them.
Click to expand...

Yes they are the ones, i know they don't eat algae, that's in mind for the amano's i just thought they were interesting, kind of rough that the species could decline due to all shrimp of that line being wild caught. That sucks.

Shows why you need to really look for the info from people who DO know.
OP
OP

Puff, the tank is plenty big enough for a few of these guys if they need to be in a group. There is plenty of plant growth etc to generate the smaller particles for them aside from supplementary feeding.
N

2. They could easily gobble up beneficial microorganisms
Click to expand...

Will they eat " beneficial micro organisms"? Yes, Will they gobble them up to the point of being a problem? NO, not a chance.
Last edited: Dec 10, 2017
OP
OP

Nick, the planting in the smaller pic in your sig is stunning. Makes mine look like a right mess.
N

When setting up a tank there are no rules, set it up to keep you and your fish happy. The big tank in my sig is a 100 gallon 6 foot tank that houses 5 Betta females, and a bunch of Red Cherry shrimp, the small tank is 2 foot 15 gallon with 1 male Betta 15 Kuhli loaches, a bunch of shrimp and 3 Mystery snails

This is the full size image. 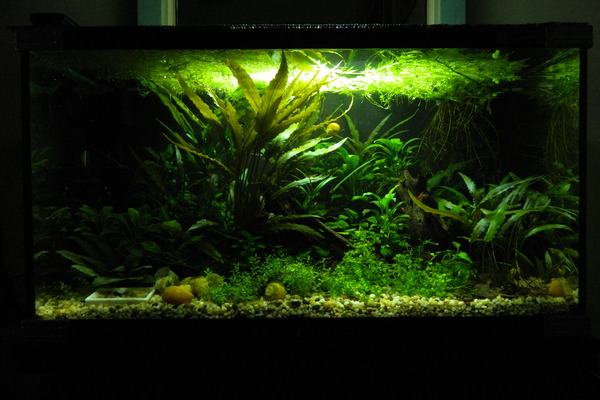 Well there in and seem to be feeding well. Went with 2 bamboo shrimp and 6 (although ended up with 7) amano shrimp. May increase the amano as they are quite entertaining to watch, not hard to find either as they are very active.
Added another half dozen harlequin tetra too that have made the harlequin happier, their colours are even brighter.

Weirdly, while trying to spot the shrimp i noticed i had completely missed the fact that the java fern has flowered. ​
You must log in or register to reply here.