What kind of loach is this?

So we did all of our research and decided on golden zebra loaches. We bought 4 initially but lost one, so now we have 3 left. We just bought 2 that are identical to our zebras, but they were under the name yoyo loach. I've read online (including past posts on this website) that sometimes they are sold interchangeably at Petco and Petsmart under the name zebra loach or yoyo loach. Can somebody help me identify this one?

That looks like a Golden Zebra Loach to me: https://aquaticarts.com/products/golden-zebra-loach

That's what I thought too, just wanted to make sure. The two we bought from Petsmart today were under the name yoyo loach, but they're identical. They're babies so they're small. I'll try to get a good picture of one of the babies

This only points out the confusion that common names frequently cause. The entire Botia species group including the "YoYo" loach is itself a muddle. The fish in your photo is almost certainly a species within this muddle group, and I see others have suggested B. histrionica and I agree this is certainly likely. Some data I researched on this species when preparing profiles of the Botia fish may be of assistance, so what follows comes from my profile.

Closely resembling Botia kubotai in patterning, this is a similar quite peaceful but playful loach well suited to a community aquarium provided its needs are satisfied. It may appear in they hobby under common names such as Burmese Loach, Burmese Zebra Loach, and Golden Zebra Loach. Young (juvenile) fish are remarkably similar in patterning to young B. kubotai.

Origin and Habitat: India and Myanmar; possibly western Thailand. Occurs in clear slow flowing mountain streams shaded by the forest. In the Ataran Riover (Myanmar) it occurs in company with Botia kubotai.

This species is very active, and as noted under Compatibility/Temperament needs a spacious aquarium with plenty of hiding spots so it can be kept in a group of at least 5 or 6, otherwise some members may be relentlessly picked on and succumb to stress and injury. A riverine aquascape would be ideal; a substrate of fine smooth gravel with smooth rocks representing boulders, caves made from bogwood or rock, and subdued lighting partially achieved with floating plants. Plants such as crypts, Anubias and java fern for the lower areas. The current from the filter need not be excessive; this fish seems to prefer quiet pools in its habitat. Water must be stable; like all loaches, this species is intolerant of dissolved organics and nitrates should be kept below 10ppm, which can be achieved with live plants and regular weekly partial water changes.

Compatibility/Temperament: Generally peaceful, inquisitive and playful. Like all botine loaches they establish a social structure within the group and in-fighting is less with this species; a group of at least five is acceptable provided there are numerous hiding places in the aquarium. They can be combined with other peaceful loach species. Long-finned upper fish should be avoided to prevent fin nipping; suitable upper fish are barbs, larger rasbora, danios, characins.

There is some variation in the patterning from fish to fish, and this may be geographical; Grant (2007) suggests that the populations with slightly different patterning may be distinct species. From time to time a fish may "gray out" as it is commonly called, usually two together and often during "fights" or when feeding. The base colour darkens considerably.

This species was described by E. Blyth in 1860 as Botia histrionica. The description by Blyth states it has 5 bands on the body which are ‘broad and subregular in shape, each containing a small round spot at the lateral line and another on the ridge of the back. Dorsal-fin with one broad interrupted black band, and some black also at the base. Pectorals, ventrals and anal, each with two black bands; and the caudal also with two broad bands and a black tip to each lobe. It appears he was looking at an adult specimen as the size given is 4½ inches.

Kottelat, M. (2004), "Botia kubotai, a new species of loach (Teleostei: Cobitidae) from the ataran River basin (Myanmar), with comments on botiinae nomenclature and diagnosis of a new genus," Zootaxa 401, pp. 1-18.

[Taxonomy accurate as of the date of writing, 2014]
OP 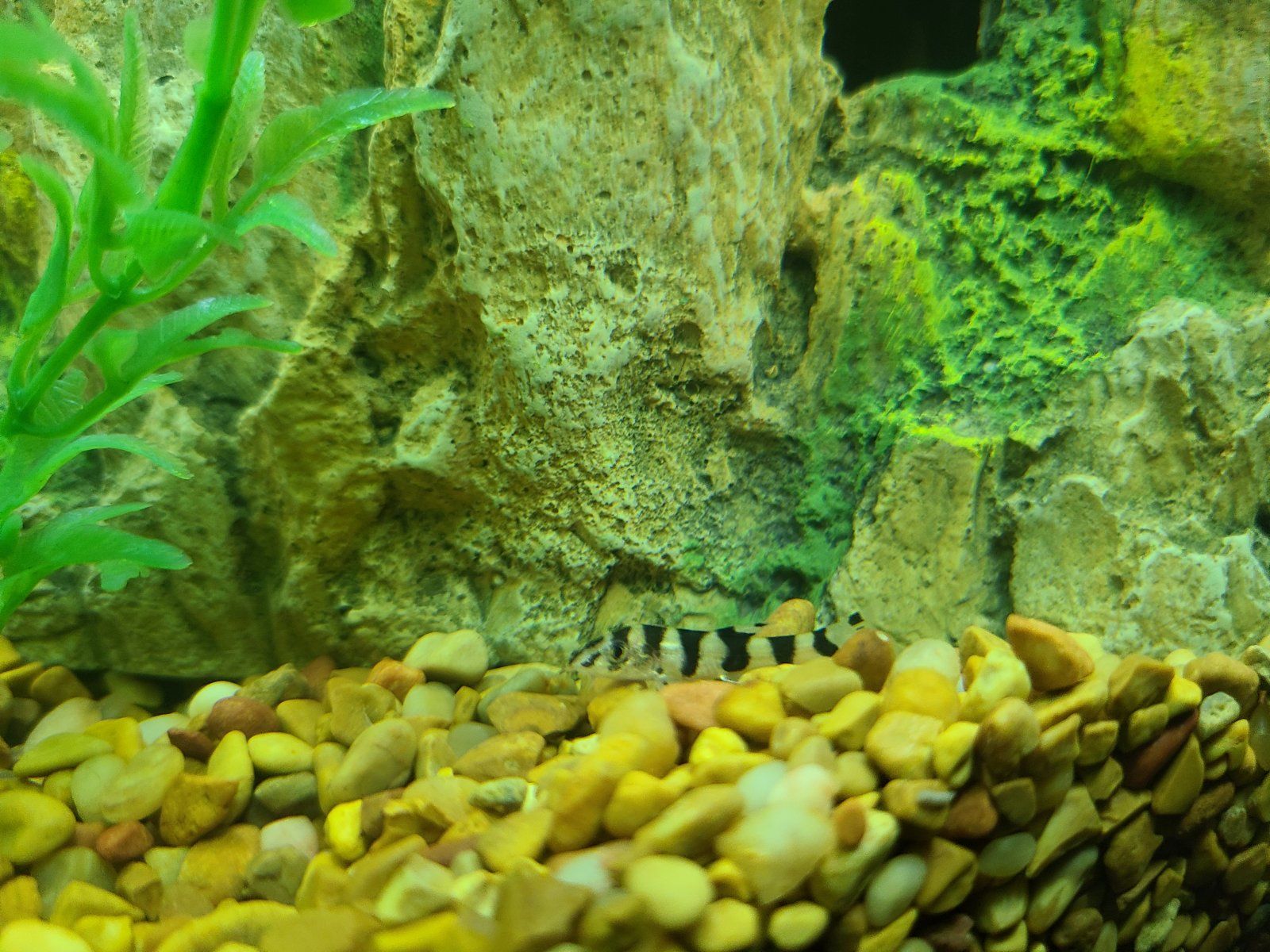 here's one of the babies we bought today. Still golden zebra?

If you look at the link in Byron's post you will see that the head is the wrong shape for the golden zebra loach, Sinibotia pulchra.

It is also not a zebra loach, Botia striata

My best guess is still B. Histrionica. Look at the second and third picture down on this page, it looks like the adult, while the top one looks like the baby. https://aquaticarts.com/products/golden-zebra-loach
OP

PheonixKingZ said:
My best guess is still B. Histrionica. Look at the second and third picture down on this page, it looks like the adult, while the top one looks like the baby. https://aquaticarts.com/products/golden-zebra-loach
Click to expand...

It does look like this. When I Google botia histrionica it appears to go by the common name golden zebra loach as well. Certainly confusing! As long as I know the approximate size and that they're all the same I'm happy lol.

One thing to note with yoyo loaches, is that - as their name implies - the markings on their bodies appear to spell out "YoYo". These loaches don't have the little "O" or "." markings, which is what would indicate that these are zebra loaches (at least for me)

Here's a yoyo loach, for reference. 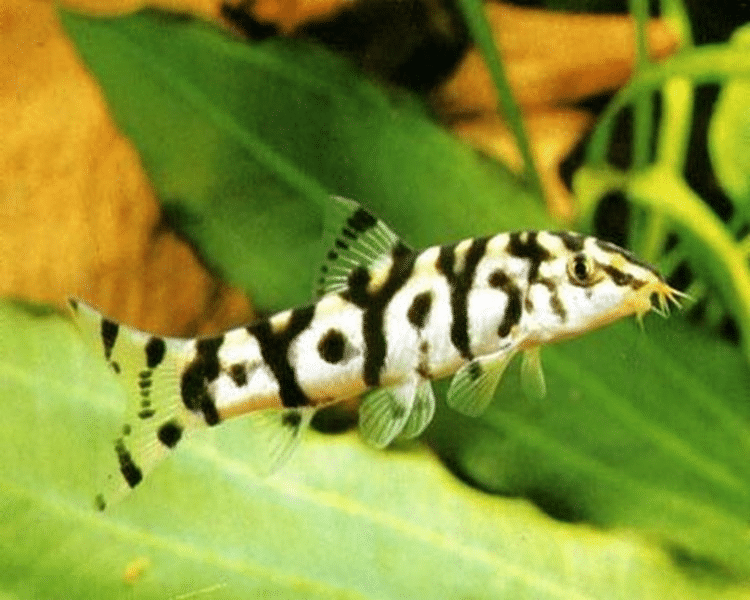 PlasticGalaxy said:
One thing to note with yoyo loaches, is that - as their name implies - the markings on their bodies appear to spell out "YoYo". These loaches don't have the little "O" or "." markings, which is what would indicate that these are zebra loaches (at least for me)

We do have one that has a spot that looks like yo but none of the others have it. I wonder if we got one yoyo and the rest zebra?

Seriously Fish doesn't give a common name for Botia histrionica


With these loaches, because there is such a variation in common name we must use the Latin name.

Skeptical_Mutt said:
We do have one that has a spot that looks like yo but none of the others have it. I wonder if we got one yoyo and the rest zebra?
Click to expand...

If you look at picture #3 on the link in post #8, you will see that the loach (I’m assuming it’s an adult) has faint spots along its body, but it’s not a Yo-Yo. (B. almorhae)

Skeptical_Mutt said:
We do have one that has a spot that looks like yo but none of the others have it. I wonder if we got one yoyo and the rest zebra?
Click to expand...

Something I always do when I see a fish species in a store that is unfamiliar, and has some common name (almost always totally useless), is ask the individual for the scientific name, which in most cases will be on the store shipping invoice or whatever it is called. I have ascertained the species name this way more than once. Now, obviously we don't know the reliability of the exporter/importer/distributor when it comes to names, but fish like these loaches will be wild caught, and the exporters tend to be fairly accurate. Sometimes the locale of the catch will be on the invoice and this can clue one in.

Which leads me to the question of one yo yo and the rest whatever. Knowing the locale where the two species occur, to be different, this is highly unlikely. Of course, the importer may have ponds/tanks close to each other and fish do jump.
OP

Thanks everyone for the help! I never knew that the labels at pet stores could be so generic or off.
You must log in or register to reply here.

Show off your tiny fish

How do those tube lights work?