What Can I Put In With My Pleco

I AM BETTA THAN YOU 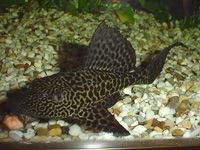 Quite alot... all dependent on your tank size really as your pleco has the ability to grow upto 2ft long!

It depends on the tank size, a common pleco will need a large one too btw.

Matt beat me too it

Yes, common plecos should have at least a 6*2*2 ft aquarium because of their size. Plecos are territorial, so compatible fish with a full sized adult common pleco include almost all *common* aquarium fish except discus (whose tasty skin mucus plecos apparently take a liking to) and other plecos (due to aggression). In an aquarium which is big enough, common plecos can be kept with other plecos, but I would not recommend that this is attempted in anything under 10*2*2 ft in size.

Another thing to consider is that plecos are cave dwelling fish, so a single common pleco should have a choice of 2-4 caves, ideally.
You must log in or register to reply here.

B
Please help me with plants! 😂

Today at 6:54 AM
Obsessed with fish