Wanted to give an update on the moving of my fish...

I took a family trip and was gone for 9 days. I kid you not, the day before I left, the canister filter on my 55 gallon went south on me. I tried to fix it with a new impeller and believe it or not, the new impeller was worse than the one I took out. So I think it may just be the canister....anyway.... I was in no hurry, as previously stated, to move the fish...until that point...

So, I was leaving the next the day, the canister had bit the dust, and what was I going to do with my fish? I just decided that that was moving day after all.

I finally caught them all, they were pretty fast, and got them in a baggie. Put the baggie in the water to float in the 75 gallon for awhile. Then I let them go freely into the 75 gallon. Nothing happened the rest of the afternoon and that night. Things looked okay, but I figured I would come home to some dead or dying fish from that quick move. Happily, when I got home day before yesterday, the plants I moved were still alive, although a bit snail gnawed, and I did not lose a single fish!! They are still doing great.

Now I can concentrate on redoing the 55 slowly over a period of time. I have to build another fish tank stand because the store bought one I have is not really made of real wood it appears. It has gotten a little wet from time to time and started to bow and separate, which has had me worried. So I will build a new stand myself for the 55, like I did for the 75, and then start the tank over. I am kind of excited about it. LOL
N 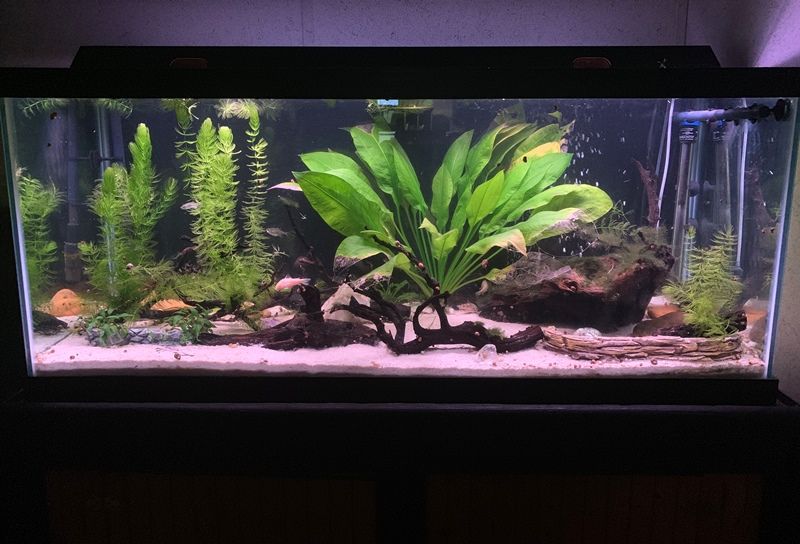 Looks amazing! Are those rock walls on each side? Really cool.

you should enter in our next TOTM contest... it starts around October 1st..
OP

Kritastrophe said:
Looks amazing! Are those rock walls on each side? Really cool.
Click to expand...

I have rocks in the tank, but not rock walls. I have a very large piece of drift wood that might look kind of rockish though
OP

Fishmanic said:
you should enter in our next TOTM contest... it starts around October 1st..
Click to expand...

Oh, I don't know about that....thank you for thinking it worthy though. I doubt my shedding amazon sword would help my chances much

for sale on ebay...Halfmoon Koi Betta

Bubbler and hardscape acquired B)