Been checking on my tank today and have a couple of concerns I have picked up on.
Firstly, this time last week I bought a pair of German Blue Rams, sold to me as male and female, I have also put pics of them both on here as have had them confirmed as such. I am worried however about my male. He seems to have lost his distinctive colouring, like the black spot and the stripes. The female does seem to be dominating, rushing over to him and chasing for a second, but I haven't seen any other aggression than that.
I have a pic to explain how he looks, it may be nothing but just incase. This was him before: 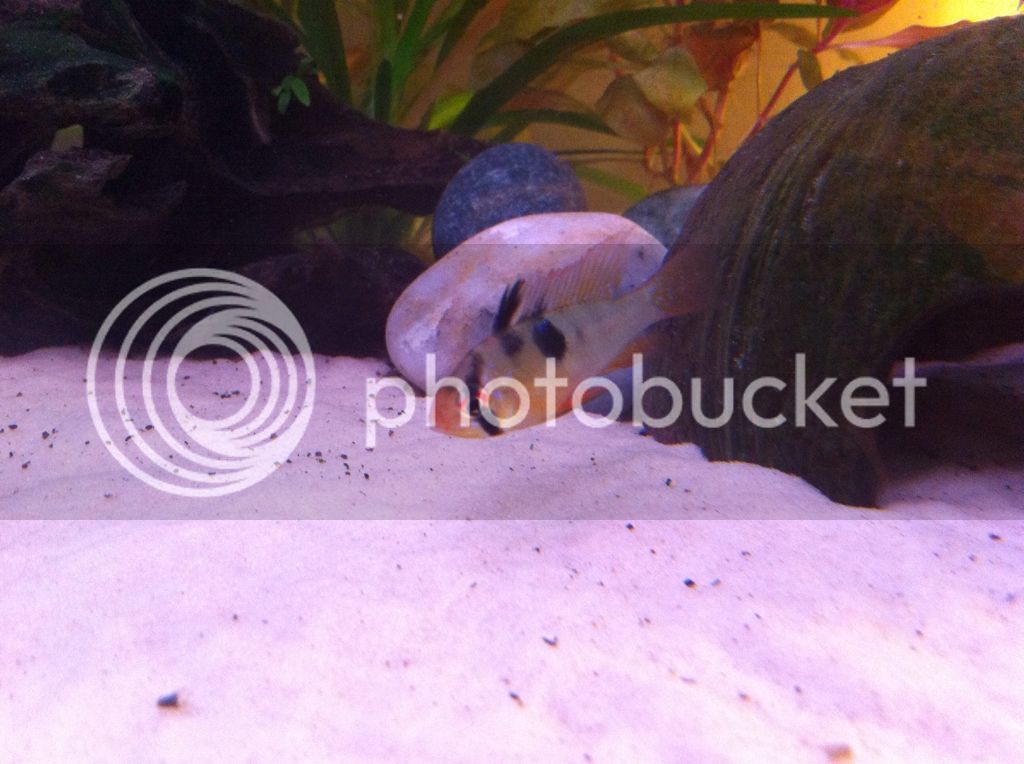 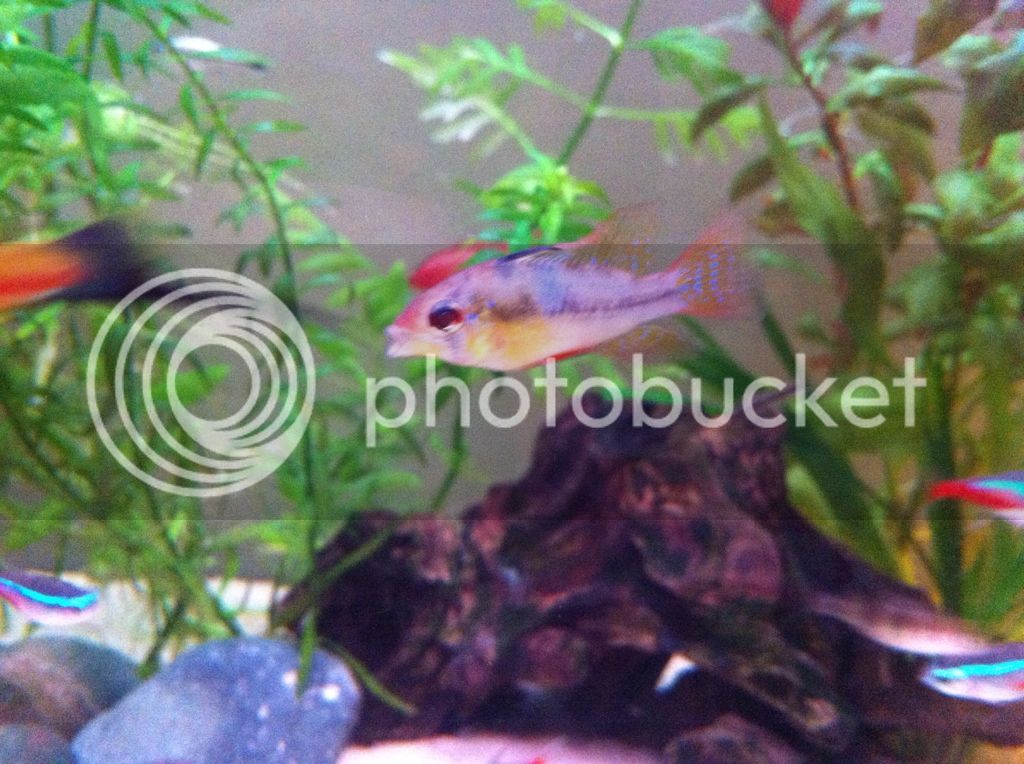 He seems to spend much of his time nearer the top whereas the female is at the bottom. Is she bullying him and causing this?

My second worry is my Angel fish. S/he seems to have a little hole right next to its eye? I have never noticed it before, but Im not sure if it has been there all along and I just haven't realised it if this is something I should worry about? 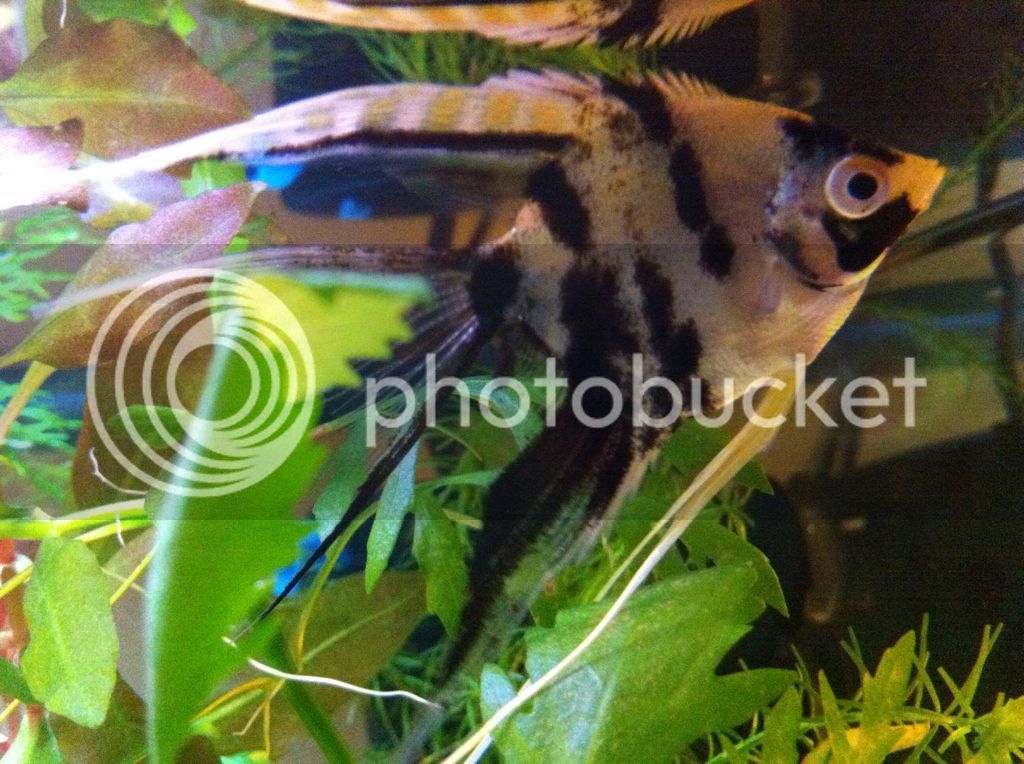 Not a great pic but it is just to the left of the eye, where the black mark ends.

My temp sticker on the front of the tank is reading at 28 degrees, yet my heater is set at 25-26, why would that be?

Sorry to bombard!! Any help is appreciated!!

My male ram is bullying my 2 females and they sit at the top and try to stay away from him 1 female has got darker and the other has gotten lighter I'm gona try to change my plants around to block line of sight and hope it stops some of the bullying I would think you have the same problem. But as with you angel fish I have no idea sorry mate
OP

Is it weird that its my female bullying the male though? She is a bit bigger than him. She looks like this: 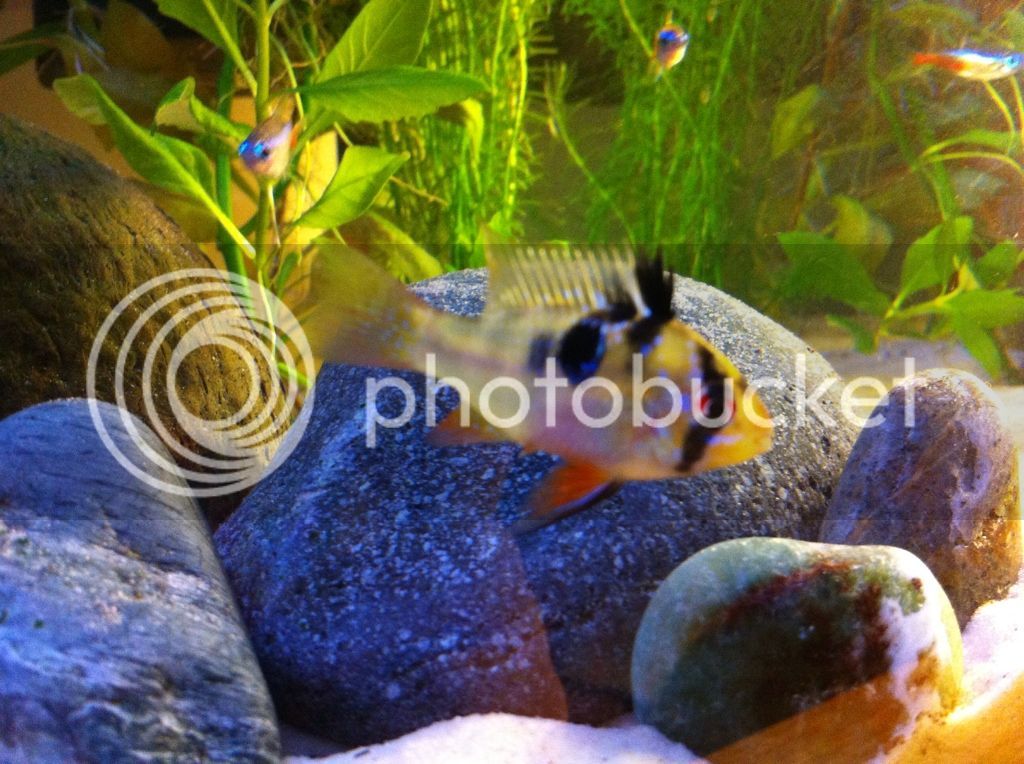 I've always found female rams more aggressive than the males,though that might just be my fish.

I don't like the look of your male, at all, tbh. I doubt very much if he's going to make it

Not sure about the angel; looks like an ulcer, or possibly a burst abscess. I'd be inclined to treat that with an anti-bacterial. Myxazin is what I always try first, it normally works very well on spots/ulers, that kind of thing.

The thermometers that stick to the front of the tank aren't very accurate. Nor are the scales on most heaters either, come to think of it! I'd get a decent, spirit type and pop that in the tank.
OP

I have Melafix/Pimafix, is that ok? I also have disease clear by King British. What should I use for the Angel?

Would you agree the male is probably that way because of bullying from the female? And if he does bite the dust, will she do the same from loneliness?

Yeah I'll have to get a new temp guide as when I put a proper thermometer in there it reads correctly at 26.

I would look more for a Hexamita treatment for the angel. More likely 'hole in the head' disease...

What are all your water stats? Ammonia, Nitrite, Nitrate, ph and if poss kh?

And what are you feeding them?

The male ram doesnt look good i always found the females to be crazy aggressive, my one killed three males before i got sick of her and rehomed her (well... she was my ex's fish that he kindly added to me tank).

Have you a breeding trap or something you can put him in? TBH even in the first photo he looks a bit thin and has that 'pinched' look about him that makes me think 'internal parasites'.
OP

Whats Hexamita? And is whatever it is fatal? S/he seems fine in themselves, still eating and swimming about as normal.

I feed them a variety of things, flake, frozen bloodworm, frozen daphnia, frozen brine shrimp etc.
And no I don't have a breeding trap unfortunately =/

Update : my male seems a bit better today. Much of his colour has returned and although my female is still chasing him, he's being brave and sticking to his guns! Is there no way after this bullying that they would pair off? An is it also an idea to get another pair?
You must log in or register to reply here.
Share:
Facebook Reddit Pinterest Tumblr WhatsApp Email Link