I posted this a few weeks ago - at that time my Powder blue Gourami had swim bladder disease for about a month and had quit eating. The disease would come and go, sometimes I could feed her "Pea soup" mixed with Miralax to get rid of any constipation. I used a needless syringe - she wasn't very cooperative LOL but I would manage to get some in her. Then for a while she'd try to eat but puke it back up the next day undigested. She never pooped.

Now it's been at least 2 months - I can't give her peas because they don't float and she won't seek out food on the bottom of the tank (or anywhere else except her special "corner" in the tank). She mainly will only eat tubiflex worms which I can smear on the side of the aquarium. Problem is - she's still not pooping as far as I can tell. I've gone through an entire round of antibiotics - which did nothing.

Now she's back to hanging vertical in the water - this has been going on for over a week. Her nose is sticking out and she occasionally sucks in air (I can tell by the air bubble) - if she gets startled she will take off swimming normally very fast but as soon as she slows down she's back to vertical.

So my question is - does anybody know of any high fiber food that will float on the water? The peas just sink and she won't eat them when I hand feed her either - she only wants the tubiflex worms which is probably what caused her problem in the first place (I do make sure they are good and soaked so they don't cause any bloat.)

A friend of mine said she had a goldfish that lived this way normally for years - but he ate reliably. She literally starved to death by not eating for over 5 weeks - how she survived is a miracle.

She is very docile, lets me handle her, seems to be glad to see me (she wiggles her fins) she seems to be fighting to stay alive but it looks like she's struggling terribly. She's not giving up so I'm not giving up on her but I can't believe she's not suffering. Below is a really bad picture but you can see she's hanging vertically
with her nose above the water. I build a rock ledge for her to rest on and she sometimes uses that so she doesn't have to work so hard to stay afloat..

She's in a 5 gallon tank that is about 3/4 full. Water parameters are great - because she's not pooping. I suction out the uneaten food routinely and do a 25% water change every 3 days.

Any suggestions would be welcome - and how does a fish go for over a month without eating and not die? I'm amazed at her hardiness. 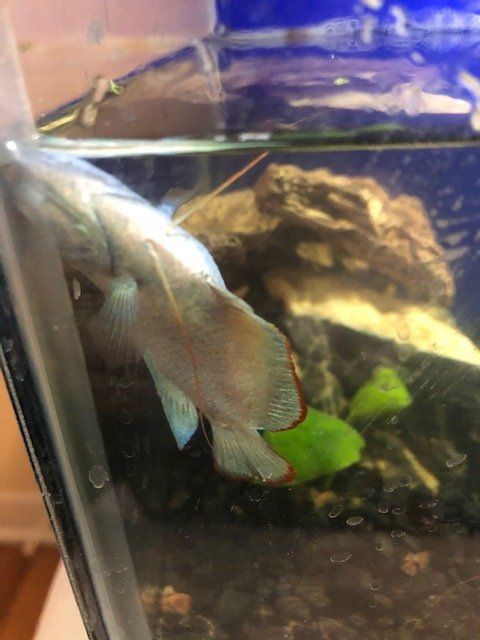 once an animal stops eating, it's time to put it down.

I agree with Colin. She looks miserable. Enticing her to eat is only prolonging the inevitable. In humans, when the dying process starts and people quit eating, natural endorphins kick in that cause a euphoric feeling. It’s God’s way of making the dying process easier. When families intervene and force feed the patient, it causes more harm than good. I bet God takes care of all of his creatures in the same way. Let her be.
OP
OP

Update on her status - I still can't bring myself to euthanize her. She is reliably eating, the problem is she doesn't appear to be pooping. That's a pretty serious problem. I started by softening cubes of tubiflex and smearing it on the side of her tank at just water level. She is constantly vertical and will sit with the food and chow down. Problem is she had not been pooping as far as I can tell. I've been trying to get her to hunt her own food (I'm using flakes) and she's just now getting the hang of it. It's an interesting method of locomotion. She goes over to her filter until it blows her away and she tries to direct the pattern of her swimming to get to more food. Usually the flakes just fall to the ground but she's been successful in getting a number of them. Then she returns to the tubiflex - I have to clean the tank often to get rid of the excess uneaten food. She's put on some weight but she looks "shaggy" - she is still very happy to see me each day - she wiggles her fins and gets all excited. This doesn't sound like a fish ready to die - on the other hand she doesn't poop at all as far as I can tell, or her poop may be of a consistency far different than the normal poop - I don't know enough about fish poop to say what is normal but all I see are fish leftovers - no strings of poop. I read an article somewhere a few months ago that said that when a fish with this disorder starts to poop - it poops almost in blocks of food (which I haven't seen) then they switch to normal pooping - which I still don't manage to see.

When I had a cherry barb with severe disease - she'd swim to the top then go down to the bottom in a topsy-turvy manner. It was late so I decided to euthanize her the next day - she was dead by morning. But my Gourami has hung on for MONTHS which makes me wonder if it's not some other disease. My Gourami takes in a lot of air at the top of her tank (air breathing) and regurgitates if she eats too much. She's gained most off her weight back but is still thin and shaggy looking - ie NOT the picture of a healthy fish but boy is she determined to stay alive.

Has anybody had a fish that didn't poop for a long time or pooped in an strange manner?

I'd like to get her back in her regular tank but not until she eats reliably on her own and not until she doesn't need the huge tower of substrate I built up for her so she could rest, it lets her do her air breathing and it allows her access to her food - no problem to do in a 5 gallon tank with about 3.5 gallons of water but I don't think she's ready for a 29 gallon tank

Sorry to hear about your fish, it must be hard on you to watch the fish suffer.
You must log in or register to reply here.

Half Banded Spiny Eel hungry all the time?