Scariest thing I had was a lot of years ago before we had internet or experience or friends in the hobby and we got a 10ft and a 7ft boa (both Commons called Bisto and Matilda) in a HUGE vivarium, not knowing and better, they were both on a large heatmat that they came with though thankfully had a stat!!

Didn't harm them per say but their shedding was really poor and they were generally either too hot (on heatmat as they were so heavy!) or cold when off it.

One day thank goodness I had managed to get them both out (getting them back in was the hard bit!!) and I was just wiping down the side of the viv when the heatmat suddenly crackled and I could see the heatmat actually burning up with tiny orange sparks around the cable! As the snakes shift about, its constantly tugging the heatmat around and damaging the cable, we were just lucky I had taken bedding and snakes out and managed to unplug and bin that heatmat!! Had I not noticed and had there been bedding in there, I have no doubt there would have been a fire!!

I also had a heatmat fail off when I was away for 3 days over Christmas, unfortunately, it was an unheated room and got really cold, came home to find both my yearling royals had died :'( poor Justin and Rosie... I still feel dreadfully guilty and will never keep Royal Pythons again they did have a stat and I suppose that's what actually made it fail, took stat back to shop and even though I had only had that one a few months, they said it was knackered and replaced it for me, gave it to a friend and that one died within 8 months. Pulse stats are way better than the Matstats.
OP
OP

Okay guys, Found my local pet store down the road do mice, So I bought few large ones. Hopefully he can handle them anyway.

I went to my LFS too in a bid to get a controller but no luck, I did get a light thought and wanted you guys thoughts.

It's a D3 Reptile lamp, 12% UVB. It's around 90cms long, I have a starter for it too I just need to work out what the best way of wiring and drilling it up.
Am guessing I'll need to remove the snake for this? I feel uneasy at the mo moving him as when I open the glass door he gets up and stares at me, Slowly moving closer. I don't know if hes expecting to get fed or what.
OP
OP

Not that far, Might give that a look over. Cheers again scotty.

Honestly, corns will thrive easily. As long as the warm side is about 80-85F, It probably will be fine.
OP
OP

So it's fine that I have a day/night cycle now? It's just easier to see the snake and more interesting to watch!

I need to get my hands on that heat controller.

I also added a plastic pipe, it's quite large. Would this count as a hide?

techen said:
So it's fine that I have a day/night cycle now? It's just easier to see the snake and more interesting to watch!

I need to get my hands on that heat controller.

I also added a plastic pipe, it's quite large. Would this count as a hide?
Click to expand...

I have all my snakes on a day/night cycle. I think that it's good for them. We want to replicate the good in their natural evironment as much as we can, after all.

In regards to the pipe: I've never seen a corn who didn't like tubes. That's the only kind of hide one of my corns' will use.

The UVB is not necessary for a corn snake, you can save yourself money on your next bulb. I am led to believe feeding live food in the UK is not legal: it is considered to be causing unnecessary suffering to mice, rats, chics etc.

Your corn looks roughly the size of my honduran, so jumbo mice/small weiner rats are likely to be ideal every 7-10 days.

The pulse dimmer quoted earlier is only suitable for a ceramic bulb. They are really good at creating hot->cold ends with an even air temp gradient. However your snake is not arboreal, it sticks to the ground. An 11×11 heat mat on a thermostat with hides at either end. The thermo stat is the crucial part as mentioned, but not because your heatmat might overheat/break. If it broke and went cold it will not tell you anything other than a red light tells you it wants to supply power to your matt. This is what a separate thermometer is for. Your thermostat could go faulty and force the heatmat hotter, so the thermometer is a good bit of kit to have. What the thermostat does is let you limit the heat of the mat to 30º for example. This means as your snake lazes on it, it wont be burned if it fails to move when the temp goes higher than it desires.

A bite frightens/takes you by surprise more than it hurts, resist the urge to fling your hand/arm.

Well worth a visit, be careful with the UV light, not all corns appreciate it.

And if you are nervous reaching in to get snake out (the reaching in bit is what scares me and I kept loads of snakes!)... get a small and easy to use snake hook, will cost you about £5 or so....

You just hook it around the snake about 20cm behind his head and carefully lift and pull him out of the vivarium a little way and once he is half out, you use your hand to pick up and support his back end. Its getting his front end out of the viv that is nerve wracking at first... once that's out, he will be as docile as anything as he is in your territory, not vice versa.

That way, with a hook, if nerves get the better of you or you need to stop for a minute, you can put him on the floor and easily use hook to pick him back up and put him in the vivarium again

But get a stat at least!! That's just so so important... cant stress it enough... not having a stat is like setting up a fish tank and not having a filter >.<
OP
OP

I have two stats being sent to me 2mro. These are mat ones and are the ones you suggested. Am also getting a nice cave hide and a temp reader all for around 35 quid. Quite a steal on the stats alone.

Am going to be feeding him 2mro as he got upset with me trying to handle him today. He comes to the glass and sits there so am going to feed him and see if he cheers up.

So the heat stats should be here maybe thrusday or friday!
Also the light is causing heating issues already. It heats the viv up quite quickly so am looking into leds just for show and safety. Cheaper too run as well.

Might just be time of year thing, its so darn hot at the moment! And with strip light, it will heat a bit all the way along...

Corns are weird, will try find photo tomorrow but they do sit for hours just watching whats going on through the glass, they are nosy!! My friends corns give me the creeps! I often sleep in the reptile room surrounded by big snakes or things like mangrove snakes but no... no its the corns that make me sit up and turn light back on in the middle of the night.... and there they are... just staring at me... 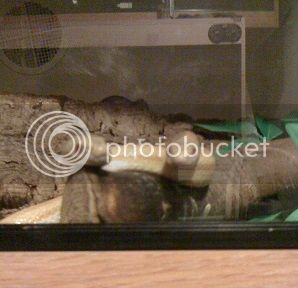 This was at about 3:30am when I turned the light on because I could feel someone staring at me...

Adult corns are pretty lazy creatures, not much activity. Don't worry about the grumpiness though: many snakes, especially ones that are fed in their vivs get a bit viv defensive. This one is also getting used to you. I had one that was so viv defensive, everything was done in the bathtub to contain fight or flights. After about 2 weeks she became really good though.
OP
OP

This guy has been feeding in the viv, So am looking at getting a RUB for feeding times to get him in the habit of everytime I open the viv am not feeding him.

I feed in-house but use a long pair of tongs to disassociate my hand from the feeding, it seems to work quite well. It is also handy for removing food safely
You must log in or register to reply here.

G
Issues with No2 and No3 levels.