Rocks For Use In The Aquarium

Rocks
There are a lot of rocks to avoid in the fresh water aquarium, these include - Ores (rocks containing metal) & Calcareous (rocks containing Calcium) these shouldn't generally be used for fresh water tanks. As a rule of thumb, test the rock with an acid to see if it fizzes. If it does then the rock contains calcium and is unsuitable for aquarium use. I use white vinegar but you can, with the proper precautions and safety gear, use hydrochloric acid. Also you should pour boiling water over your rocks or wherever possible immerse them in boiling water to clean them and to kill any unwanted bacteria that may be living on it. Do not boil or roast in an oven and never use a microwave to heat up rocks.
Note; Rocks retain heat for a long, long time be extremely careful when handling hot rocks.

Amethyst is a form of quartz, however it also contains Manganese and Iron.(this is what gives it the pale lilac to deep purple colours) darker the colour the more iron contained in it. The darker the piece the more hazardous it could be in an aquarium

Dead Coral. For Marine tanks only! Not Recommended.
Due to the poor collection methods and the unnecessary reef destruction this is a morally poor tank decoration and prohibited in some countries. Realistic artificial pieces are now widely available and are a much better choice.

Flint is usually dark grey, blue, black, or deep brown in colour & can be very sharp. It will scratch your tank if not positioned carefully.

Geodes primarily consist of limestone, however many are quartz based. Sometimes minerals contained with in the hollow are harmful & even those that are ï¿½safeï¿½ are often razor sharp and can be lethal to fish.

Photo used with permission from Franklin Institute Science Museum and Tammy Payton www.tammypayton.net
Granite is safe for aquariums; it is a very heavy rock and comes in many colours. Try to get rounded granite as it can come in jagged lumps.

Photo used with permission from Franklin Institute Science Museum and Tammy Payton www.tammypayton.net
Gypsum is Hydrated Calcium Sulphate a sedimentary rock. Being as it is made up of calcium sulphate it is entirely unsuitable for aquariums. 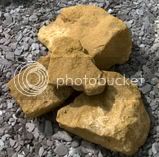 the large amount of Fe maybe beneficial to a Dutch aquarium but one with fish it could be harmful in the long run.

.
Nephrite is a form of amphibole, actinolite (a mineral that also includes a form of asbestos).
The second, the mineral jadeite, is a pyroxene.

Nephrite contains mostly iron ions and or magnesium ions and would therefore be more suited for jewellery than for an aquarium.
Jadeite is perfectly safe for aquatic use but probably more cost effective to sell it to a jeweller.

A form of Chalcedony (mixture of Quartz and Moganite[SiO2])
This mineral is also an oxidate which means as it breaks down in water it produces oxygen and oxides.
Rainbow jasper has lots of metallic impurities in it, so is best avoided for aquatic use.
to emphasise
red jasper good
rainbow jasper, best avoided.

Photo used with permission from Franklin Institute Science Museum and Tammy Payton www.tammypayton.net
Limestone is a very heavy rock and will raise the pH. Limestone rocks are sedimentary rocks that are made from the mineral calcite which came from the beds of evaporated seas and lakes and from sea animal shells.

Cured live rock looks great in a marine tank by making it as natural as possible. It can provide a very good biological filter. Lots of marine life will be added to the tank along with it.
Note; Some of the above life may be undesirable.

Marble. Do not use!

As marble is a metamorphosed limestone and is composed of fairly pure calcite, it is very dangerous to be used in an aquarium.

Photo used with permission from Franklin Institute Science Museum and Tammy Payton www.tammypayton.net
Obsidian rocks are igneous rocks that form when lava cools quickly above ground. It is actually glass and not a mixture of minerals. The edges of this rock are very sharp. It will scratch your tank if not positioned carefully.

Onyx is a cryptocrystalline form of quartz and is therefore safe to use.

Petrified wood.
Petrified wood is safe for all aquaria it is often banded and of variable colours. It is almost always made up of microcrystalline quartz. It's very inert and safe to use in an aquarium. There are exceptions and you should use the acid test to be certain.

Pumice. May not sink.

Photo used with permission from Franklin Institute Science Museum and Tammy Payton www.tammypayton.net
Pumice rocks are igneous rocks which were formed when lava cooled quickly above ground. You can see where little pockets of air had been. This rock is so light, that many pumice rocks will actually float in water, so it may not be suitable for aquariums. Pumice is actually a kind of glass and not a mixture of minerals.
Note; do not boil or roast due to possible explosions of trapped air pockets. 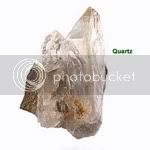 Quartz can be sharp and it is harder than glass. It will scratch your tank if not positioned carefully. IMO doesnï¿½t look very nice in aquariums.

Photo used with permission from Franklin Institute Science Museum and Tammy Payton www.tammypayton.net
Water-worn pebbles of varying sizes can give a very natural look to an aquarium. Sandstone is mostly safe to use for all tanks after the standard cleaning protocols; however it is a sedimentary rock made from small grains of quartz and feldspar.
Note; due to the feldspar, (which can contain potassium, sodium or calcium) it may be harmful.

Photo used with permission from Franklin Institute Science Museum and Tammy Payton www.tammypayton.net
Slate can vary in colours for pale grey to a deep purple. Completely inert and is cheap to buy. Large thin pieces can be used as a background.
Note; Beware of sharp edges.

Tuffa Rock. For Marine and African Cichlid tanks only!

A very light rock ideal for where a lot of rock is needed to build a reef. Very cheap to buy if you get it from garden centres instead of local fish shops.
Note; Tuffa rock is formed from Magnesium Sulphate so it will harden the water.

Photo used with permission from Franklin Institute Science Museum and Tammy Payton www.tammypayton.net
Scoria is completely inert & very light. It needs to be mixed with rounded stones because it is too jagged for fish to use for spawning. It has an unnatural looking purple colour when new, but it soon naturalises. Scoria rocks are igneous rocks which were formed when lava cooled quickly above ground. You can see where little pockets of air had been. Scoria is actually a kind of glass and not a mixture of minerals.
Note; do not boil or roast due to possible explosions of trapped air pockets.

So as to comply with certain copyright laws most of the following information can be found at either List of rocks or list of minerals certain Photos can be found Here. all others are freely available on the internet.
See copyright rules Here

UPDATE 1-Aug-07
It has recently come to light that a lot of the wording I used for this article was originally stolen from here. This was not known to me at the time.
I have spoken to the original author and he is amicable to this topic staying on this site.
My thanks go to Andy Gordon for his understanding in this mater and my apologies to him for my reaction
to his repost of his topic on another forum.

also added in this update are pictures for ironstone, jade/jadeite and amythist
G

for us with soft water limestone is ideal.. i could not cope without it.
OP

for us with soft water limestone is ideal.. i could not cope without it.
Click to expand...

If you could clarify then I will amend the article
S

I use holy limestone in mine and they are fine.

"No one is a failure unless you try"

I never gave much thought to what rocks could be harmful for aquariums... I just assumed that if it was sold in my LFS, it was safe (it's a very knowledgeable shop.)
I have a chunk of marble in my 5 gallon, and I just tested the pH after reading this... everything is fine, though

for us with soft water limestone is ideal.. i could not cope without it.
Click to expand...

If you could clarify then I will amend the article
Click to expand...

I can't speak for gixer, but I use Limestone in my African cichlid tank for the purpose of raising the pH.

Sorrell said:
I can't speak for gixer, but I use Limestone in my African cichlid tank for the purpose of raising the pH.

Thanks Sorrell
I have now amended it

amazingbioloboydp said:
What about alabaster

Gee, you sure know you're rocks ! Thanks for the info man!
R

I have something called jade rock, harvested from the northern teritory in australia. Is it sutible??

Rainbow_fish said:
I have something called jade rock, harvested from the northern teritory in australia. Is it sutible??

I did not include Jade in the original post as it is a semi-prescious stone and costs put it well out of ordinary peoples budget.

having said that
A semi-prescious stone, jade is a name applied to two different silicate minerals. Nephrite is a form of the amphibole, actinolite (a mineral that also includes a form of asbestos). The second, the mineral jadeite, is a pyroxene.

If you have Nephrite that would be a concern as that is mostly iron ions and or magnesium.
If you really have jadeite then it is perfectly safe.
Personally I'd not waste shuch a nice stone in the aquarium.
A

Location
Somewhere on the East Coast of the good ole' USA!!

Defintion-common name for the blue, crystalline heptahydrate of cupric sulfate called chalcanthite, a minor ore of copper. It also refers to a fine-grained, light to dark colored blue-gray sandstone. Deposits are extensively quarried as flagstone (paving stone) in New York and used commercially for buildings and paving stone.

This information found on http

I saw in the original post that sandstone can be harmful and this is a type of sandstone, but different. Was wondering what your thoughts would be on this. Also I remember reading something about copper and aquariums, but I have been drinking tonight and it's all kinda..... fuzzy

) Thanks in advance!
OP

I don't have time to look into it right now, have tro go to work.
I'll check it out tonight and get back to you.
R

Which way does driftwood alter your ph?

can sandstone be used in aquariums

types of rock not suitable for an aquarium