Care: Acanthastrea corals, better known as acans, are a large-polyped stoney coral (LPS). They are an encrusting coral and usually form large mounds in the natural reef environment. Acanthastrea corals are not the most common corals you see on reefs, but, a. echinata is the most common species of acan. The coral has thick round corallites with small pointy teeth and concentric circles of thick 'fleshy' tissue. They look very similar to closed brains. They can be very colorful.

This coral should be placed on the substrate or stable portion of low reef where it won't be dislodged. This coral is usually found at depth so lighting is usually low and not higher than medium. Although usually obtained as small frags (see comment), this coral can extend long mesenterial filaments. Turf wars/stinging will result if corals are placed too closely together.

Feeding: Rainbow acans contain the symbiotic algae called zooxanthellae and are therefor photosynthetic. However, acans will extend small sweepers at night and have a good appetite for meaty foods including Cyclopeeze, enriched brine and baby brine and mysid shrimp. You can target feed them with a pipette.

Propagation: This coral spreads by budding or lateral extension. It can be fragged by simply splitting the fragment of live rock that it is on with a hammer and chisel carefully.

Comments: Corals in the mussidae family including acanthastrea sp. and blastomussa sp. are hugely popular right now and prices can go through the roof. Don't be price gouged on these corals as almost all reports show that they are NOT rare nor in short supply. Many reefers have been ripped off purchasing them. Be careful. As you can see, the frag I have is small. 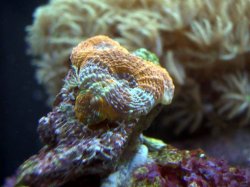