This thread began as a question about plant additives losing effectiveness, and has now rather metamorphosed into one about providing complete nutrient fertilization, which is instructive and valuable. However, one very important distinction needs to be made, and that is the considerable difference between high-tech planted tanks and low-tech or natural planted tanks. And the fish play a part in this.

In most (admittedly not all, sadly) high-tech systems, fish are absent. They don't matter, the plants come first. So one is free to experiment with mega-light, daily over-dosings of fertilizers, with no real detriment to fish.

The same does not apply to tanks with fish where fish matter, and their welfare is prime concern. Light has to be geared to the fish needs. And nutrients obviously have to be present but in not more than sufficient levels. These products do affect fish, because anything added to the water affects fish in some manner. There are some nutrients that should never be added to a tank with fish first, because they (the nutrient) occur naturally and usually at sufficient levels for the needs of the plants in such a tank.

In discussions like the present, it helps to know the type of tank the poster is considering, as the advice for a high-tech system with respect to adding fertilizers would be highly detrimental in a low-tech tank. Not to mention the effect on the poor fish that are confined to this space.
Last edited: Jun 10, 2021
OP

Byron said:
In most (admittedly not all, sadly) high-tech systems, fish are absent. They don't matter, the plants come first. So one is free to experiment with mega-light, daily over-dosings of fertilizers, with no real detriment to fish.
Click to expand...

That's why I do not like aquasquaping.
All what I want is plants in good health to make good envirenement for fishes.

Avel1896 said:
That's why I do not like aquasquaping.
All what I want is plants in good health to make good envirenement for fishes.
Click to expand...

Then you select plants that will grow under the light intensity you have, and then add fertilizers minimally if needed. Your GH is important as a source of calcium and magnesium because these two macros are often minimal in comprehensive fertilizer, for good reason--many people have moderately hard water so they have sufficient. Carbon naturally occurs from the breakdown of organics in the substrate (more than from respiration), and in most of our fish tanks that is sufficient to balance several hours of tank lighting. Oxygen and hydrogen are obviously plentiful in our fish tanks. So the "comprehensive" supplements provide all you need, and maybe more than you need, on their own [it is best to leave out nitrogen (nitrate) and phosphorus because they will never be in short supply with fish being fed, but some comprehensives have very low amounts so can't be helped]. If the plants are obviously growing--and remember different plants have different growth rates so do not expect new leaves every couple of days or even weeks, depending--then you are providing sufficient (maybe even too much) fertilizer. It all depends upon the biological system.

The photos below are what I achieved with moderate lighting and once a week liquid fertilization (Flourish Comprehensive Supplement in this case, at just the once-a-week dose rate) and Flourish Tabs next to each of the larger swords. The first was my 5-foot 115g Amazon River, the second is my present 3-foot 40g "cory" habitat.

Stunning tanks ! Your fishes live in paradise !
My Microsorum is getting brown-red spots that spread to almost all adult leaves. I heard Microsorum is often is somewhat "capricious", taking much time to settle. I also heard it would want much potassium ?

Very kind, thank you. I am a minimalist, nothing goes in the water but what is absolutely essential.


Avel1896 said:
My Microsorum is getting brown-red spots that spread to almost all adult leaves. I heard Microsorum is often is somewhat "capricious", taking much time to settle. I also heard it would want much potassium ?
Click to expand...

It does take time, yes. But as for potassium...rubbish. Seriously though, the problem is less often "x" nutrient and more often light, or nutrient totality. Microsorium loves shade; under floating plants is does better, most times. Slower-growing means less nutrients too. A comprehensive supplement, and here I can mention Flourish Comprehensive, Brightwell Aquatics FlorinMulti, and TotalNutrient's TNL (not their TNC), as having all you need--and more importantly, in proportion to what botanical studies have shown aquatic plants require. This avoids too much of "x" or insufficient "y" etc, with the exceptions for the reasons I mentioned in my previous post. As soon as you start adding additional of "x" or "y" you start upsetting the balance and creating problems.

I will just note that I can't seem to find TNLite on their website, maybe they discontinued it (?), it is only available in the UK anyway, but it would be nice if someone knows (@Essjay ??). The TNL has/had no nitrate or phosphorus, the TNC (complete) does, but so does Flourish Comprehensive so we have to grin and bear it. Neither of these should be added to a low-tech or natural planted tank with fish if one can avoid it.

The 33g "lagoon" tank pictured below was the result when I just let the Microsorum pteropus attached to a few chunks of wood do what it wanted. Notice the floating plants, this probably helped.

I have some Limnobium laevigatum in quarantine (yes I quarantine plants also). It will soon join Microsorum, Anubias, Cryptocoryne ande Bucephalandra

Byron said:
I will just note that I can't seem to find TNLite on their website, maybe they discontinued it (?)
Click to expand...

Going straight to TNC's website - aquarium - fertiliser, I can't find Lite either. But using the search function on their website does find it. Strange. 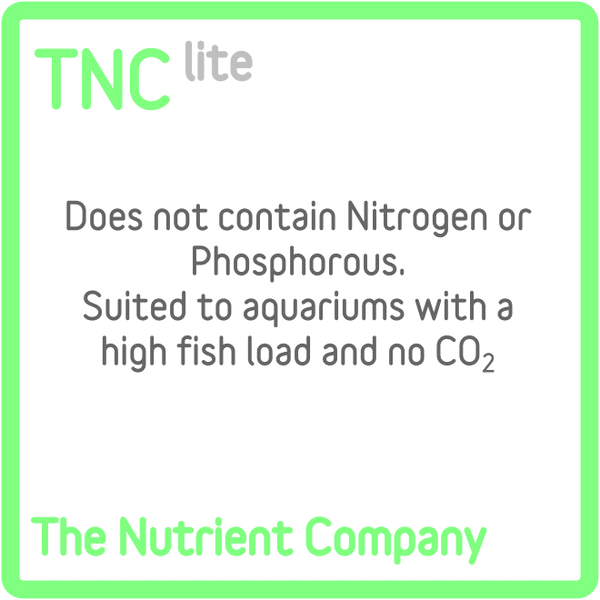 For more lightly planted aquariums. Does not contain Nitrate or Phosphate. Will not cause algae. Can be used in conjunction with TNC Plugs Suitable for beginners or more experienced aquascapers. Description TNC lite is Nitrate and Phosphate free. It is specifically designed for use in lightly...

And there are plenty of shops, including Amazon, which still sell it.
OP

I just had an eye on TNC and it seems it's somewhat equivalent to EasyLife products.
S

Avel1896 said:
I just had an eye on TNC and it seems it's somewhat equivalent to EasyLife products.
Click to expand...

Easy life is not equivalent. If you www.rotalabutterfly.com and use the nutrient dosing calculator you wil seee a difference in the concentrations of the Micros.

The left column list the nutrient and in parenthesis the approximate level in plant tissue). All levels are listed in parts per million (milligrams per liter). All values in the graph are normalized to a Fe dose of 0.1. Based on the level of nutrients in plants it is very difficult for plants to consume 0.1 PPM of iron in a week

Note easy life has only 8 part per trillion of zinc while TNC has 33 parts per billion. Plants like about 20parts per billion and boron and zinc soould be at equal values. I know from personal experience that you cannot grow anything with zinc at 0.0008 PPM if thefetilzer is the one only source of nutrients.

So Easy life is not a well balanced fertilizer. TNC is the only one I have found on the Rotalabutterflycalculator that is reasonably balanced. TNC does have more iron than needed but keeping iron soluble in water is difficult so they probably boosted the Fe level to compensate.

While I cannot get TNC were I live I have made a fertilizer with the Plant tissue nutrient levels. And then later reduced the dose to levels close to what is TNC is using for ZN, Cu, and B,but with less iron than what is in TNC.

I just had an eye on TNC and it seems it's somewhat equivalent to EasyLife products.

From mown experience light is only an issue your nutrient levels are only slightly out of balance. But with many fertilizers having multiple nutrients at esssentially zero levels, and variations in tap water nutrient levels it can become very hard for some people to get a good planted growth in a tank.


Byron said:
And the fish play a part in this.

In most (admittedly not all, sadly) high-tech systems, fish are absent. They don't matter, the plants come first. So one is free to experiment with mega-light, daily over-dosings of fertilizers, with no real detriment to fish.
Click to expand...

From what on sites where high-tech tanks dominate the discussion. Most tanks have fish in them Tom Barr the greater of estimative index dosing have fish in his tanks and he apparently likes large schools of fish .And on these same sitse focused on high tech tanks I see very few posts about parasites, fish diseases (hole in the head, fin rot, etc). Shrimp and snial and plant growth issues seem to dominate the issues list. Hovever on sites dedicated to low tech tanks there are a lot of people asking for treatment advice for various diseases.Andany that do have plants often give up because they won't grow. It would seam that fertilized tanks with well growing plants generally have fewer fish decease even with very high fertilizer levels, with fewer issues then low tech tanks.

Using RO water and an inert substrate (quartz gravel) and seachem Flourish comprehensive I have deficiencies of N, Ca, Fe,S, Cl, Zn,Cu. basically I would find one nutrient deficient and then plant growth would improve for a short time, then plant growth would stop, and then I would find another nutrient deficiency. When I realized zinc and copper were an issue I gave up on flourish and then after doing a lot of looking I basically gave up on commercial fertilizer products and made my own. And there first batch I made was was significantly better than seachemFlourish, Seachem trace, andAqueon. Fertilizer +iron, and CSM+B+macros.
Last edited: Jun 12, 2021
You must log in or register to reply here.